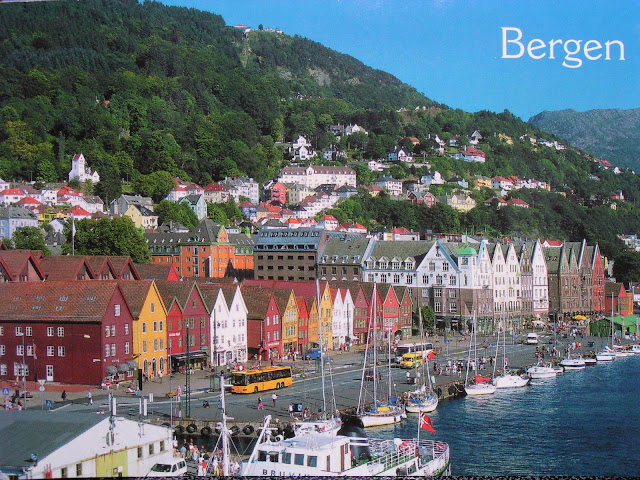 I was awakened about 7:45 by a group of people talking loudly out in the hallway. Probably could have taken another short nap before the alarm was to go off at 8:45; but decided to get up & do something productive. So I gathered my blanket & curled up on the couch & worked on the computer. The view from the bridge camera didn’t look real promising. It’s raining; but an hr. later after we pulled into Bergen, the sky lightened up somewhat. Breakfast came at 9. Back to the raspberry yogurt, granola & a scrambled egg. 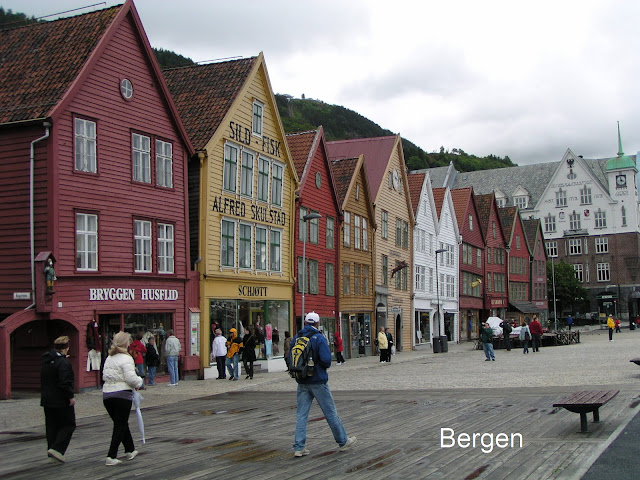 Melita, Bill & I had decided that we wanted to just amble around Bergen on our own. The historic area, known as Bryggen, is easily walkable. So, we struck out on foot; & maybe a half a mile later we were there. There are rows of brightly colored, 3 story buildings on both sides of the rectangular shaped water basin. Some of the houses are perfectly upright; some lean a little towards the right; some a little to the left. Bill said it was because the wharf is so old; but I never know if he’s pulling my leg or not. How I wish there was bright sun to show off the gorgeous colors; the photos all looked washed out to me.

We headed toward the Fisketorget (the fish market for you non-Norwegians), which is a series of tents set up at the short end of the basin. Every fish, vegetable & trinket imaginable. I had read that the market was no longer a big deal. Maybe it’s size has diminished over the years, but it has anything you could possibly want. As soon as we arrived, it began to rain. For the rest of our day “in town”, it went from a light rain to drizzle & back. Our luck has finally run out. Anyway, back to the fish….. There were humongous king crab legs, raw salmon, marinated salmon, smoked salmon, reindeer sausage (didn’t care for it), moose sausage (even worse), elk sausage (not too bad). They gave samples of just about everything; & we tried it all. There were even freshly made sandwiches to eat on the run; piles of tiny shrimp or salmon on a thick roll. One of the things that caught our eye (& noses) was the fish cakes. They were about 3½” round & some contained onions. Melita wanted to try it; & she let us have a bite. Luscious! 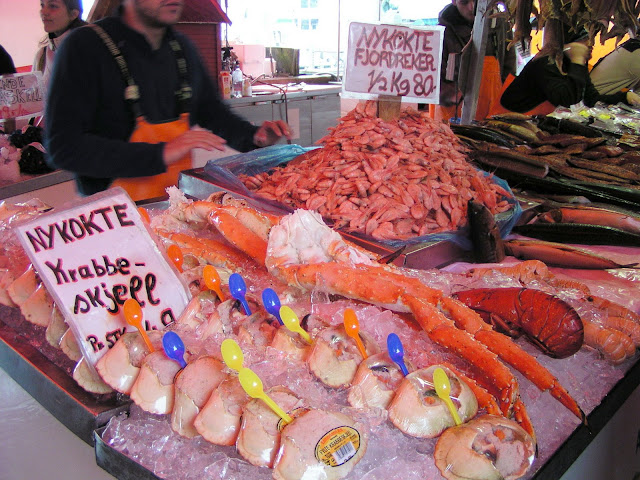 Not wanting to take a chance that the weather could get worse, we decided now was the time to take the funicular up to Mt. Floien (elevation 1,050’) for the (supposedly) fabulous city view. Tickets were 70 NOK round trip ($14 US). Melita & her fear of heights & inclines had to sit in the middle of the car looking at the floor; but the trooper that she is, she did it for us. At the top we stepped out on a very chilly concrete platform to shoot photos. On a sunny day, I’m sure the view is breathtaking. At first it was drizzly; had to get out the rain poncho & umbrella. 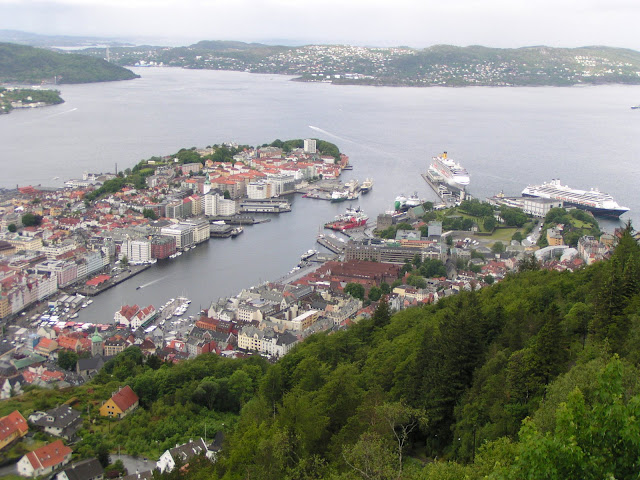 There is a nicerestaurant up there; & the obligatory souvenir shops. We stepped in there to look around. While we were in there the rain stopped. So Bill & I went back out to take the pictures again. Melita was on a mission looking for something in particular (I’m not spoiling the surprise for her family); so she was lost in the shops somewhere. As soon as we decided to take the next cable car down, the sun peeked through for just a min. I run back out to retake the photos. (Anything for a good shot!) Bill & I were able to wrangle the front seats in the car; but Melita parked herself behind us facing the other way & looking anywhere but out.

Bill had asked one of the fish mongers (a lady) if she’d recommend a good fish restaurant. She gave him a pamphlet on one that was kinda off the beaten path. It looked far enough away & w/ the rain, we hailed a cab to take us there. $20 US to go about 3 miles; we arrived at the restaurant only to find that they weren’t serving today (come back on Mon.). The fish market part was open; & you’d think the fish monger lady would have known that. So, we had to walk back to civilization to hail another cab to go back to the wharf area. We ended up at a restaurant in that row of “crooked” buildings where we had stopped earlier to look at their menu. The place (Bruggeloftet & Stuene) was charming w/ stained glass windows & murals on the walls. 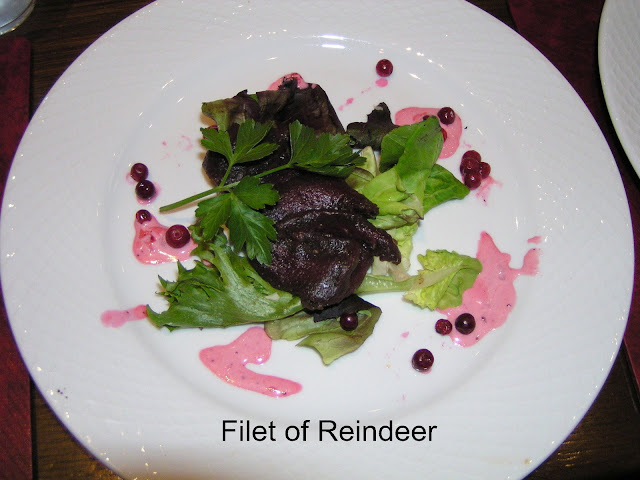 So many things on the menu looked good; we ordered 5 items & shared everything. We had garlic marinated (raw) scallops salad (Hvitloksmarinert Kam); marinated gravlox w/ dill mustard sauce (Husets Gravlaks Servert M/Dillsennepsaus); marinated filet of reindeer w/ lingonberry cream (Gravet Reinsdyrfilet M/Tyttebaerkrem);fish soup (Bergensk Fiskesuppe M/Skalldyr) & soup of dried cod w/ onion, garlic, tomatoes, chilies & potatoes (Bacalao). (I’m throwing in the Norwegian names; because, believe it or not, it’s beginning to make sense.) Bill tried another local beer; but this one was a little too “beery” for Melita & I. The scallop salad was a little on the bland side in my opinion. The gravlox was a big hit, freshness makes all the difference in the world; & that dill mustard sauce was excellent. The reindeer was shaved thinly & was a dark reddish purple color. I’d rather see my reindeer w/ horns on the side of the road; but Bill thought it was good. Can’t really tell you what it tasted like; cause I’ve never had anything close. But I won’t try it again. The fish soup was a white cream sauce base w/ baby shrimp, a few scallops & some sort of shredded white fish. It was very good; but the real hit of the meal was the Bacalao. It was thick like a stew; & easily falls into the category of “orgasmic”. 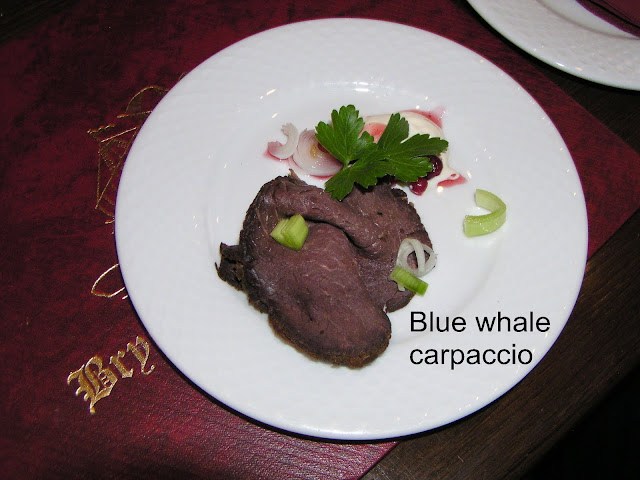 After the waitress brought the check, Bill inquired about another item that was on the menu, marinated whale carpaccio (Bryggecarpaccio Av Rokt Hval M/Cumerlandsaus). The waitress went back to the kitchen & came out w/ a tiny sampling of it. I expected it to be “whale color”; but it was darker, like a meat. Bill thought it was pretty good; but it’s another thing I won’t be trying again. This exotic lunch divided 3 ways was $44 (US) per person. Now let’s recap here…..moose, reindeer, elk & whale. That’s enough adventure for one day.

We decided to stop back by the fish market; & get some smoked salmon tobring home. We’ve learned how different, different parts of the fish taste. So, we actually tasted our salmon before it was vacuum packed for travel. They’ve assured us that it will be fine up to 7 days w/o refrigeration. Since I get home 3 days before Melita & Bill, it was decided that I should bring it all home w/ me. I don’t know what it is about being at the fish market; but every time we went there today, it started raining harder. So, we ducked into the Radisson Hotel in hopes of grabbing a cab. The front desk called us one; & we were back onboard ship by 2:30.
We dropped off our bags; & headed up to the coffee shop for cappuccino & lattes. Then we parked in the Explorer’s Lounge about 3 pm. I brought the laptop to do some “work” & watch the scenery as we pulled away at 5 pm. It was pouring down rain by the time the ship left. Melita & Bill decided to take advantage of the lull in the action; & do one more load of laundry. I stayed up writing & editing photos for over 3 hrs. On my way back to the cabin, I decided to check at the purser’s desk to see if there were still any small refrigerators to rent. I had read online that you could have one in your cabin for $2/day. I made arrangements for one to be sent so I could keep the salmon as cool as possible for as long as possible. It’s formal night; & we chose to go more casual; & eat at the Lido buffet again tonight. They went up early for drinks; & I joined them at 7:15. It was a good menu tonight.

Melita & I started w/ the Thai chicken lettuce wrap w/ cilantro, lime juice, ginger, red chili, mushrooms & hoison sauce. Neither of us were impressed. Bill & I had the sweet potato soup w/ leeks & cream. Two thumbs up. I had escargot bourguignon; & it was very good. Bill had a chef salad for his second appetizer. Melita had them prepare her a bowl of spaghetti puttanesca; but when she got to the table w/ it, she realized it was Bolognese (not puttanesca). Bill & I had the lobster tail; me w/ asparagus & him w/ cauliflower & potato puffs. His lobster was mushy; mine was perfect. I could easily have eaten another. There was an awesome dessert on the D.R. menu, which unfortunately (or rather fortunately) they were not serving in the Lido. It was a chocolate cake, soaked w/ condensed milk & chocolate cream sauce. I wanted it so bad.

We parted ways at 8:15; they were going to bingo (trying to win a 7-day Caribb. Cruise). I think they were going to the late show, a vocalist. I came back to the cabin to finish this; & found that they had delivered the small fridge & my steward had put the salmon in there. The room smells of salmon; so I took it out & washed each vacuum sealed package w/ soap & water. It helped some. But the fridge has to fit under the desk where I usually work. So, now the room is crowded w/ furniture in the middle of the floor. As I sat here typing, it dawned on me; “why don’t I call room service & see if they can get one of those chocolate desserts?” It took several calls back & forth before they discovered that the dessert I saw had been on the lunch menu. I was heartbroken. You would think there had been some left over. Guess it was a sign from the God’s. Went up to the Explorer’s Lounge about 9:30 to transmit this journal entry. My intention is to get comfy under the warm covers as soon as possible; & sleep til I can’t sleep no more…….