I was sleeping so well when the alarm went off at 8; but there was a lot to cram into today. We wanted to be ready to jump ship the minute the Capt. announced that the ship had been cleared by the local officials. I gobbled down my room service breakfast. Scrambled eggs, a banana, mixed fruit yogurt w/ raisin granola. I was ready & waiting at 9:30; & we disembarked a little before 10. We all had an afternoon tour booked; but there was something we wanted to see this morning. There is a Northern Lights Planetarium where you can experience this phenomena through a IMAX theater film. We asked a local guide on the street how to get there; & she informed us that it is closed (& has been for a while). Bill & I were so disappointed. But she did suggest that we make the trek out to the Tromso University Museum where we could see a photo presentation. So, we took the ship’s shuttle service (which no one onboard told us about; cost 55 kroner or $11 USD). But this “ticket” would allow us to transfer between buses all day. So, we were dropped off in the city center, where we switched to the #37 bus which carried us a good way east of town. The film presentation on the aurora borealis was beautiful; I can only imagine how spectacular it would be to see it in person on those long winter nights. After the film we went upstairs to look at an exhibition on the Sami (native Norwegian tribe) culture. We saw their tents, huts, boats & sleighs (complete w/ stuffed reindeer to pull it). That part was okay. Would I do it again? No.

We waited a long time for the bus to return to the central station; but the sky was so blue & temps were higher than predicted (I’d guess in the mid 50’; but warmer in the sun). I walked up & down the street taking pictures of the cute brightly colored houses w/ the snow capped mountains in the background. When the bus dropped us off on the pedestrian street; we had some time left & started looking for a place to have lunch. All we could find was Chinese or pizza. Disappointed, we decided to come back to the ship & have lunch. The next adventure was to find the right bus stop for the #42 to take us back to the suburb of Brevika where the ship was docked. No one could seem to tell us where to go; so we’d walk in this direction & then come back in the other direction. Or maybe we should go the next street over & check there??? Finally we spotted one of the shuttle buses like we took into town; he stopped, we hopped on. Surprisingly enough we got back to the ship at 12:45 w/ enough time to have a nice lunch before our next tour. Of course, we had to stop at the souvenir tents that were set up on the pier. I was interested in something warm for my head & ears (for tomorrow’s visit to the North Cape); & looked at a fake (acrylic) reindeer hat w/ ear flaps. It didn’t look too bad on me; but it was 498 kroner ($100). I could have gotten a REAL reindeer throw for that much. Melita tried on this funny hat that had points on it like a jester hat. 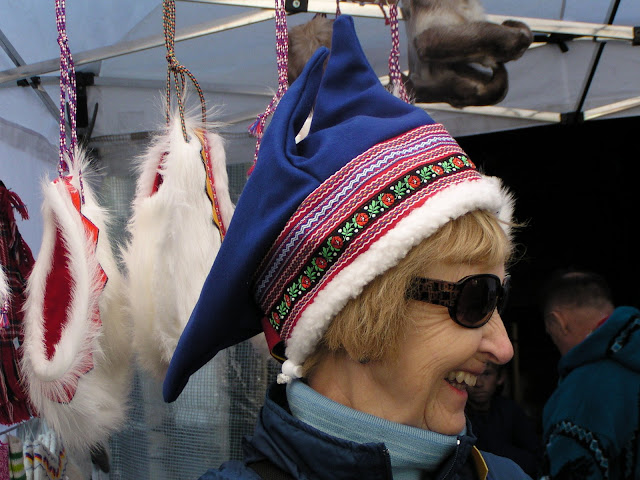 We dropped off our stuff; & went up to the Lido buffet. The ginger almond & garlic broccoli salad; sounded good, but wasn’t. I had a cucumber boat w/ spinach & baby shrimp in it. I tasted the meat loaf (flavorful but needed ketchup or something). I made a big salad & had a bowl of delicious Thai chicken soup (real spicy). Since the weather had warmed up more than predicted, we all decided to shell out of some of our layers of clothing before going back out. I was to meet Melita & Bill out on the pier at 2:20 for the tour; & I couldn’t find the gangway. I knew what deck it was on; but when I got down there & all the way aft, it wasn’t there. I run back up the stairs, looking for a house phone. I had to ask 3 people before someone knew that it was all the way forward & down. I could barely catch my breath when I went down the gangway. We were the last ones on the bus. 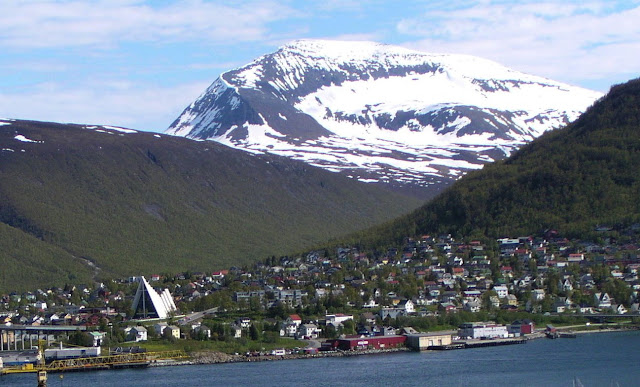 Our guide, Tatiana, is Russian who went to college in Norway; & she did a pitiful job speaking the English language. Everything she tried to say, she hesitated & struggled to think of the right English word. Getting commentary out of her was like pulling teeth; it was painful. Melita & I were getting so tickled, Bill threatened to move. Our first stop was at the Tromso Military School for a photo op overview of the city. She said we had 30 mins. This hardly warranted 10 mins.; & we did leave a little early since everyone got bored & reboarded the bus quickly. Then we traveled over the bridge to the mainland (town of Tromso is on a large island) to visit the Arctic Cathedral. 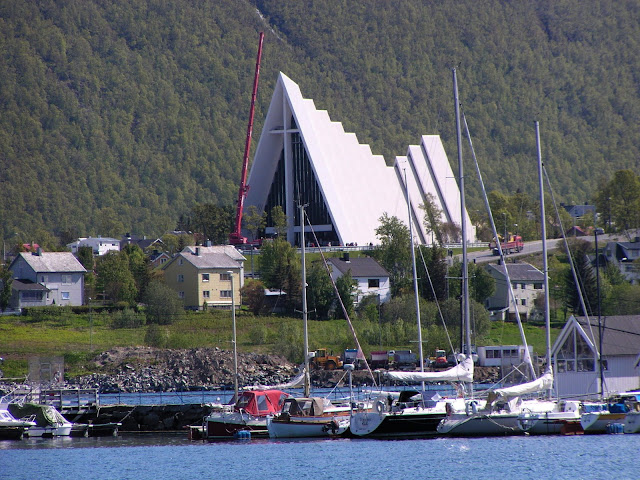 A pointy triangular glass structure that houses a huge pipe organ shaped like a boat & the largest stained glass window in Europe. The altar was very simple w/ only a small brass cross sitting on it. The stained glass has Christ w/ his arms outstretched, almost in the shape of a cross. It was quite beautiful & moving at the same time. 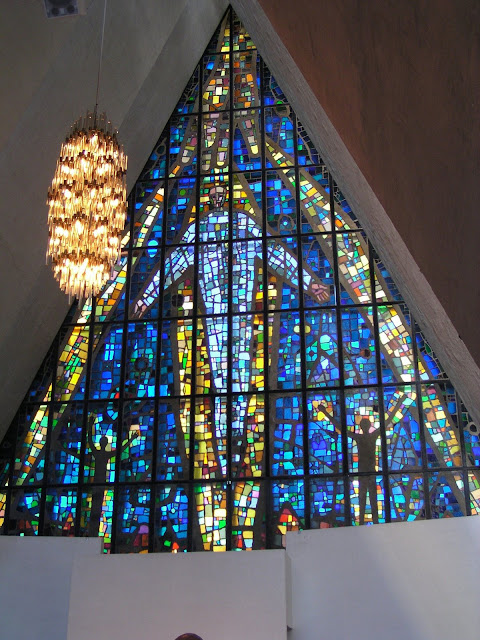 From there we proceeded to the Polaria Museum. There is a small 5 screen IMAX theatre where they followed the life & migration of many Arctic birds & mammals throughout the 4 seasons. It was thrilling at times “flying” close to the ground, turning corners into glaciers & mountain crevasses. We even saw sea butterflies, which are butterflies that live under water. The scenery was from Spitsbergen, a large island north west (& part of) Norway where wildlife is prominent. After the film, we stepped into the polar museum which was room after room of “stuffed” animals & birds. There was a sleeping white polar bear, nesting birds; & then a glass tunnel that ran through & under the seal tank. Three females swam back & forth; & all around us. It was pretty interesting, just on a small scale. The outside of the museum is interesting in the respect that from the side it looks like large square blocks of ice that are falling over on top of each other. 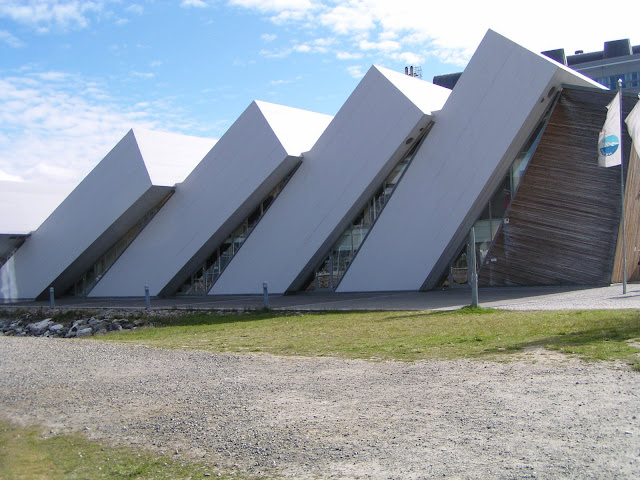 Next door under an arched glass roof is the Polar Star, the oldest wooden seal hunting vessel. We would have loved to have seen the Botanical Gardens which is close to where the ship docked. But this morning it was too cold for walking through gardens; & there wasn’t sufficient time this afternoon. Another thing I would love to have done was to take the cable car up to the mountain top for views of the city. But we managed to cram a lot into this day; & we were ready to go “home”.

We returned to the ship at 5:15; & when I came to my cabin, my cabin key wouldn’t unlock my door (again). Wish I could figure out what it is that’s demagnetizing my key card. So, back to the purser’s office to reset the card. When I get into my cabin there is a pungent fume-like smell. Kind of like something electrical is burning (only it was not). I step back in the hall; but it doesn’t smell out there. The smell was getting heavier; so I called the front desk. They sent a purser down right away; & she had no idea where it was coming from (my guess, it had to be coming in through the A/C vent; but what was it?). She asked if I was going to be going to dinner; & if so, she would have a machine brought in to suck the smell out. So, I told my cabin steward when I was leaving; & he set up this machine. When I came back 2 ½ hrs. later the fume smell was gone; but replaced w/ a cleaning solution smell. As I said, it’s been a day of adventures.

Tonight there was a special “Master Chef’s Dinner” in the D.R. They referred to it as “dinner theatre” w/ the stewards singing, dancing & juggling (vegetables) tableside. Preferring a quieter, more casual & civilized dinner setting; I chose to eat up in the Lido. Melita & Bill went though; & they said it was fun in a hokey kinda way. They sat w/ a nice group of people. After dinner, Melita continued her winning streak in the casino. Tonight, in addition to some small payouts, she won $76 on a 5 penny bet on the penny machine. She was giddy w/ excitement; & she said the casino people came over immediately & “adjusted” the machine. While they were doing that I was upstairs enjoying the fabulous scenery on the way out of the fjords. There was mountainous terrain on both sides of the ship. There was snow on the east sides; but it had melted off of the west where it faces the afternoon/evening sun. I sat & talked w/ a lady from SFO (that I had talked w/ before) for a couple of hours while I ate. Which, by the way, as a delicious meal of a “puff ball” shaped appetizer of pickled & chipotle hot smoked salmon tartar w/ lime/avocado/tomato salsa. There was a delicious “purse shape” of phyllo pastry that held baked brie sitting on a cinnamon-spiced apple cranberry relish. Also a tiny little phyllo cup that held mushroom & asparagus mousse. My main course was beef tenderloin w/ asparagus.

I came back to the cabin to finish typing the journal; then headed up to the Explorer’s Lounge to log onto the internet & upload it to my AOL webpage. This is one night I wish I could stay awake all night. Tonight we experience the true polar night. Sunset is 12:00 am; & sunrise is 12:00 am. In other words, the sun does not dip below the horizon. We should experience the same tomorrow night. This happens between mid May to early July in this part of the world. It is a very strange feeling, disorienting in a way. A magical experience for sure!
Posted by Unknown at 6:39 PM