6/22 Stavanger, Norway
Slept well; but again, up earlier than I needed to be (7:45). I think the anticipation of each day’s adventures is like a burst of adrenaline that just propels me out of bed as soon as my eyes open. The view from the bridge camera looks dismal. Dark grey skies & everything shoreside looks wet. Not the greatest day for a cruise tour in the fjords. I piddled & played w/ my photos on the compt. for over an hr. before room service brought breakfast. A cup of mixed fruit, raisin granola & peach yogurt. I’ve finally figured it out….the reason I can’t get strawberry yogurt is because all the cups of yogurt have the same picture on it. And if you don’t happen to read Norwegian, you can’t tell raspberry from pineapple.

I went out on deck to take some photos; but there’s not a whole lot to see from this vantage point. The first thing I saw on the starboard side was what appeared to be metal scaffolding about 100 yds. from the side of the ship. It wasn’t until I got way up on top & looked down into the middle of this wall of steel that I figured out it was a sandy volleyball court & bleachers on all 4 sides. There is an int’l tournament here the next few days. I still had half an hr. to kill before I was to meet w/ my tour on the pier, so I went to the Lido Café for a cup of hot chocolate. They were opening the buffet line early, so I snuck a little snack. A tiny bit each of Thai beef salad w/ onion & snow peas & a sweet corn salad w/ roasted chicken, bell pepper & hearts of palm. Both were delicious. I got a thin sliver of leg of lamb. I was off the ship (still raining) at 11:40.


We only had to walk a short distance to a waiting high speed catamaran that was to take us on a cruise through the Lysefjord (pronounced LOSA fjord). (Lyse means “light”, called this because of the light stone walls on the sides of the mountains.) The main cabin was huge w/ airline type seats of 3-3-3-3, w/ an aisle in between. The windows were spotted w/ rain; & I thought I’d step up on the open top deck & see if I could stand the cold. There were a few brave souls up there; so I decided to tough it out. I offered my inside front row seats to Mary & Angela (Barbados/Toronto); & they took them. I had on a blouse, my fleece hooded sweatshirt & my rain poncho w/ hood & gloves. That provided enough insulation; but they were flapping wildy in the wind. I could tell some of the people standing behind me were fighting off the plastic. They had stackable chairs; & I took one & put it facing aft behind a pillar to protect me from the blowing wind & rain. It wasn’t too bad. Once we left the harbour area, the rain was more intermittent than constant; & there were even some sunny spots. 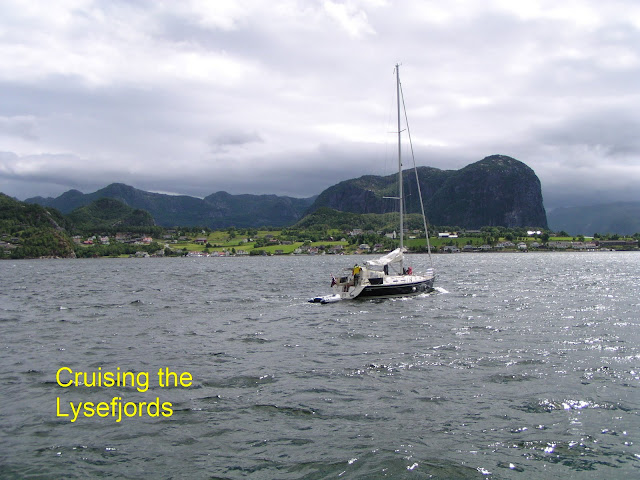 We passed many tiny islands & a lot of small settlements w/ brightly colored houses next to the shoreline. You’d see resort areas along the way w/ the cutest cabins. There were abandoned settlements where the copper mines used to be. I saw several fish farms w/ large areas of nets marked by circles of buoys. We made a stop at a small marina at (a very rocky) Helleren Beach w/ a glass enclosed restaurant w/ beautiful views into the fjord. Here we were treated to huge waffles w/ whipped cream & the most awesome strawberry jam. The waffles must have been at least 10” around & were in the shape of 6 small hearts joined at the point. Unlike the waffles we had in Flam, these were perfection. That jam was to die for. I had the pleasure of sharing the table w/ Viviana Guzman, the Chilean flautist that is a featured entertainer on this cruise. She’s a lovely lady; & she had a good friend of hers traveling w/ her. 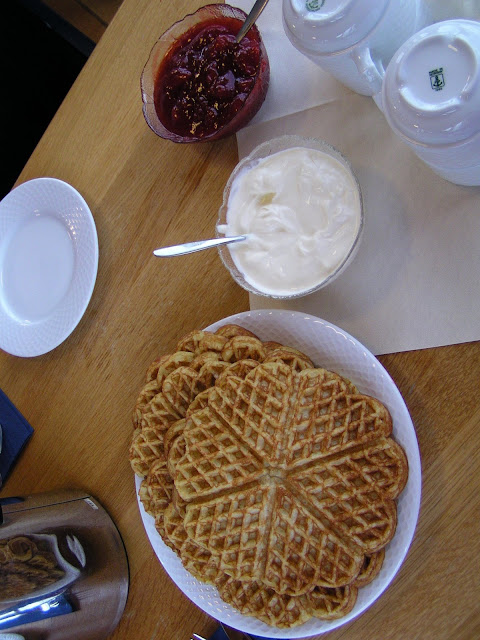 While we were eating, it poured rain; but when it was time to go, the sun had come out. This brought a lot of the “downstairs people” up to the open deck. I went all the way forward beside the bridge; & the Capt. opened the door & invited us to come into the bridge. We then headed deeper into the Lysefjord. Shortly the boat began to slow down; & I could see he was heading into a dead end gorge. He aimed the bow of the boat into this dark corner; & it was quite spooky in there. This spot is called “Vagabond Cove” (Fantehola), where in ancient times a group of vagabonds were trying to avoid paying taxes; & they escaped by climbing up this crevasse. When the sheriff tried to follow them up, they threw huge rocks down on him & scared him away. We backed out of the tight opening; & proceeded further up into the fjord to “Pulpit Rock” (Preikestolen). This perfectly flat (82’ x 82’) platform 2,000’ up looks like a high diving platform. Legend hasit that Pulpit Rock will fall down when 7 brothers marry 7 sisters from the same district. Hmmmmmm… 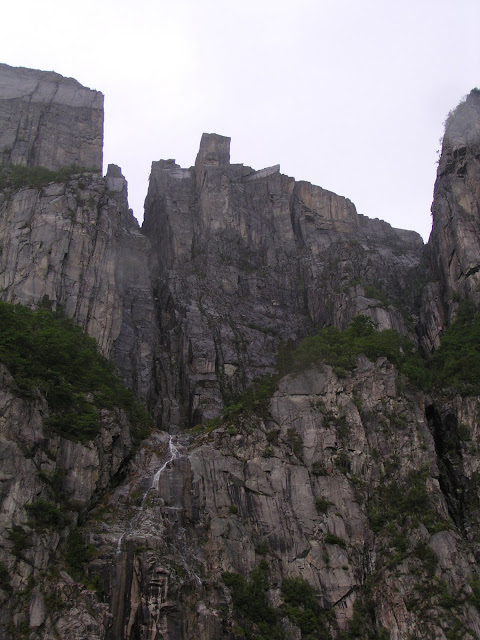 A little further down, a humongous waterfall appears. Just as we approached it, one of those jet boats made a banking turn right up next to it. The people onboard were dressed in wet suits; & I’m sure they got a cold drenching. We could feel the spray onboard even though we didn’t get that close to it. These falls are called “Whiskey Falls” (Hengjane foss). It got it’s name from a German bootlegger named Heinrich. We passed a goat farm about this time; & we could see some that had separated from the flock & were clinging to the side of the mountain. We were supposed to pass a sea lion colony; but they must have been “out of town” since no one sighted them. We soon reached the turn around point of this cruise. The skies were partly cloudy as we sped back to Stavanger. But just before we reached “town” it started drizzling again. Such a shame, as this town probably looks lovely in the sunshine. Melita & Bill got off for about 45 mins. (rain drove them back in); & they said that the houses all had pretty flower gardens. 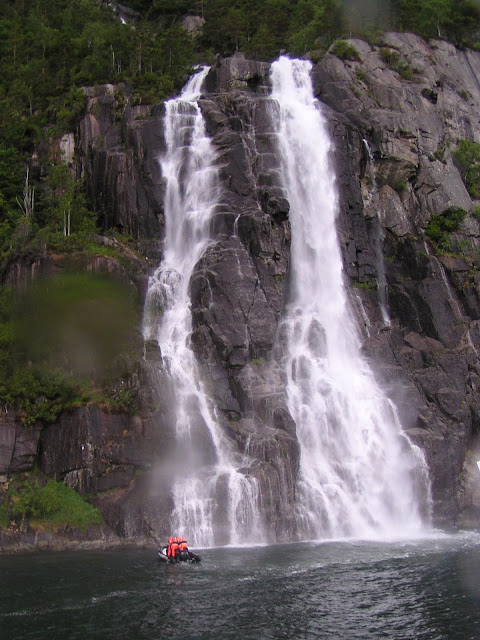 We got back to the ship at 3:30 just before the gangway was removed. I went back to the cabin & started work on the pictures. As we sailed at 4 pm, the Captain announced that we would sail into the Lysefjord & view “Pulpit Rock” & “Whiskey Falls”. Had I known this I would have saved the $100& stayed onboard for the “free show”. Of course, then I would have missed out on those fabulous waffles. I figured Melita & Bill were up in the Crow’s Nest to watch the scenery; so I went up there to give them the fjord map we had received on the tour. I looked everywhere for them; no luck. I came back & left them a phone message. In a little while I realized that the final bingo game was going on; & I knew right away that’s where they were. Melita stopped by the cabin about an hr. later; & sure enough they were playing bingo. She said a couple did win the free 7-day cruise; & then the husband later won the big jackpot. Sounds fishy to me! She also had a little trinket that Bill bought for her, a lovely pave’ diamond necklace. Nice souvenir. From the bridge camera I could see we were approaching the “rock’ & the “falls”, so I ran up to the promenade deck to take more photos (as if 224 were not enough). 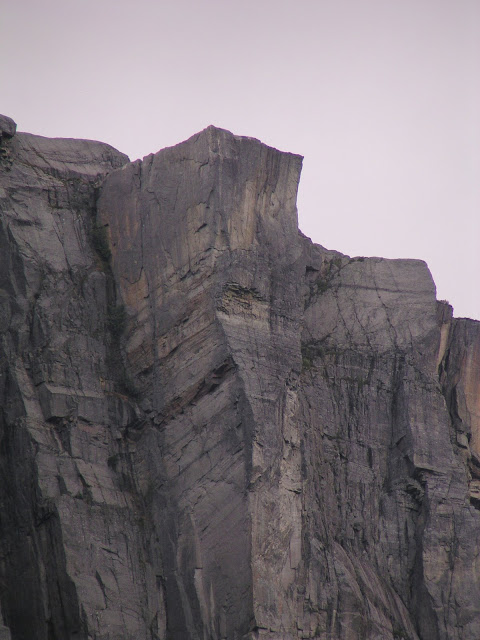 I met Melita & Bill in the Lido Café for dinner at 7:30. We felt like doing casual again. I had lunch so late, I wasn’t too hungry. So, I had an appetizer of small eggplant medallions in a garlic, tomato, basil topped w/ crumbled feta cheese. I tasted Bill’s bean & ham soup; & it was fabulous. I couldn’t decide between the herb crusted baby lamb chops & the broiled snapper; so I had a little of both w/o the side vegetables. I know, I should have just had the vegetables. The snapper was mushy, funny tasting & therefore, inedible. But the lamb chops were pretty good. I made a salad which I brought back to the cabin to have as a midnight snack. Melita & Bill went off to feed the slots & then attend the late show. I came back to do a little “work”. Got up to Explorer’s Lounge about 10:30 to upload the journal to AOL. It had to be an early night because my tour is early in the morning. I refuse to start packing tonight cause it’s so depressing. There’s plenty of time for “depressing” tomorrow.
Posted by Unknown at 4:29 PM