I was up a few times in the night; maybe slept 5 hrs. I woke at 6 to go the bathroom; & when I settled back in bed this damned high pitched whining noise started. It went on & off for about 20 mins. It was like the sound of the winches lowering the lifeboats (which we were going to use for tendering today in Edinburgh). The only thing is that I’m not anywhere near the deck where the lifeboats are lowered from. Pretty soon there were the sounds of room service knocking on doors up & down the hall delivering early breakfasts. So, I was up to stay. I had room service deliver a fluffy ham & cheese omelet, strawberry yogurt & muesli (which I intended to mix in w/ my yogurt, except that they had mixed it with warm milk). I learned later that Melita & Bill also didn’t sleep well (what are we to do???). They were scheduled for a different tour than I; but found that the time of the tour had changed til (too) early in the morning. So Bill canceled their tour; & decided that they would just get around on their own. I was signed up for a trip to the Edinburgh Castle. We were to go to the Queen’s Lounge & get a tender ticket; & I was on it at 9:15. We have lucked out once again w/ the weather. The skies went back & forth from partly to mostly cloudy; & temps made it up into the mid 60’s. 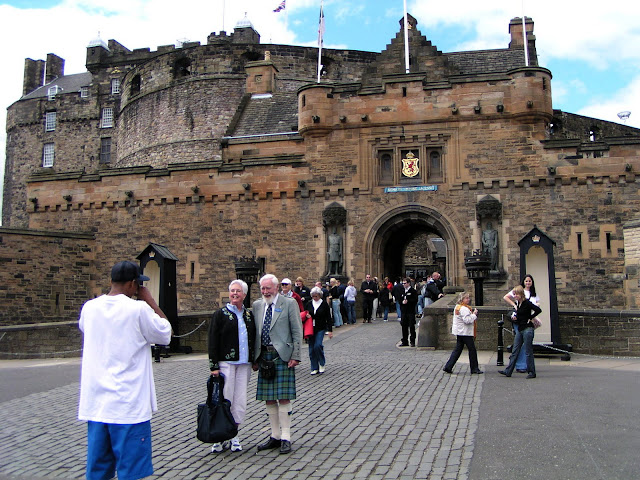 Our Guide, Fiona & bus driver, Richard (dressed in their tartan plaids) pointed out some of the local highlights on our way there. We passed Hollyrood Palace, the Royal Mile (main shopping/entertainment street), the Scottish War Memorial & past the Parish Church of Hollyrood (which is the “Queen’s Church” when she is in Edinburgh). We finally made our way up to Edinburgh Castle, which sits up on a hilltop 445’ above the city. The bus let us off in the parade grounds in front, which had already been deck out w/ sets of bleachers. The annual Scottish Tattoo (bagpipes & military marching spectacle held each Aug.) is months away; but they set up the bleachers early & throw a few rock concerts to test whether the bleachers are strong enough. As in, let’s take a chance on losing a few music fanatics just to make sure the more civilized Tattoo attendees won’t fall to their deaths!

Fiona said we could follow her for some narration, although she is not licensed to “guide” people through. I chose to follow her, which was a mistake. Lovely as she is, she rattles a bit too long on less important (at least to me) subjects. This 1,000 year old castle is actually an enclosed village made up of museum towers, shops & the palace. There is military memorabilia in one, the crown jewels in another (which I couldn’t get in to see because the line was too long) & an apartment where Mary, Queen of Scots gave birth to King James. Our time was much too short; but at least I can say I was there. The plan was to take us back to the ship; but I asked Fiona if they could drop me off somewhere along the Royal Mile so I could meet up w/ Melita & Bill. Fiona suggested the Art Gallery, since there is a nice restaurant below it where we could have lunch. I called their cell phone; & found that they were on (& about to finish) their circle city double decker bus tour. When they dropped me off, it took one more phone call for us to find each other (we were across the street from each other & lost in the crowded sidewalk scene).
Bill had inquired about a nice lunch spot; & we found the LeMonde Hotel right away. They have an elegant restaurant upstairs called “Paris”. In my opinion, the red & black ornate décor reminded me of a bordello; but the food was outstanding. They classify their food as “French cuisine w/ a modern twist”. We shared an assortment of appetizers: asparagus wrapped in prosciutto w/ a red pepper mayo dip; the most orgasmic grilled Portobello mushrooms stuffed w/ goat cheese; & small deep fried shredded sweet potato fritters w/ an herbed crème fraiche (unfortunately they were overdone & tough). Melita had the most awesome version of macaroni & cheese made w/ Isle of Mull cheddar & a pungent strathdon bleu cheese w/ chestnut mushrooms. Bill ordered a burger made from lamb mixed w/ fresh mint, garlic & ground spices served on a bun w/ yogurt dip type spread. I tasted it & found it repulsive; but he seemed to enjoy it. I had grilled scallops (so Melita is on a mushroom binge; & mine’s scallops) on a bed of pureed cauliflower w/ little crisps of fried parma ham & light truffle oil. Simply divine!
I was having trouble w/ one of my 2 sets of rechargeable camera batteries. On a full charge, you can take a few photos & then they’re spent. So, they’ve seen their last days. We lucked upon a Fuji camera shop down the street; & I was able to get another set of batteries. (I can easily run through 2 sets of batteries a day.) Bill & I were both anxious to see the Royal Yacht Brittania (Queen Elizabeth’s yacht that has been decommissioned & is now a floating museum). 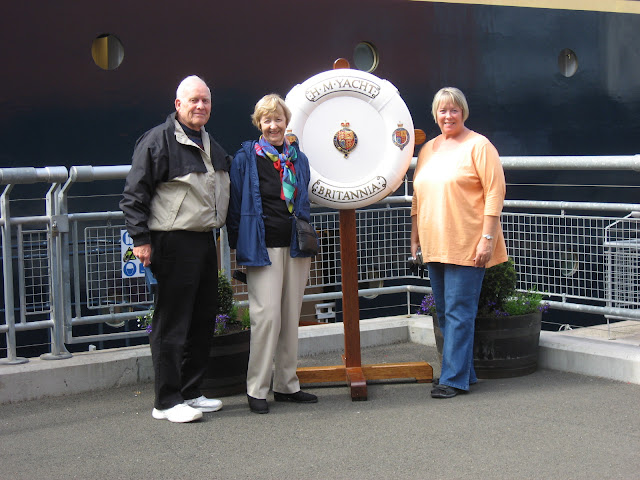 We took the double decker tourist bus to the town of Leith where she is docked. Much to my surprise it was not as “grand” as I’d expected. I guess you could call it more “homey”. We visited the blue & white beachy/nautical themed sun room where the Queen always read her newspaper. This lead to a hallway of staterooms, all of which were smaller than I expected. The Queen’s twin size bed was covered w/ a small floral print spread & had floral embroidered panels on the walls. 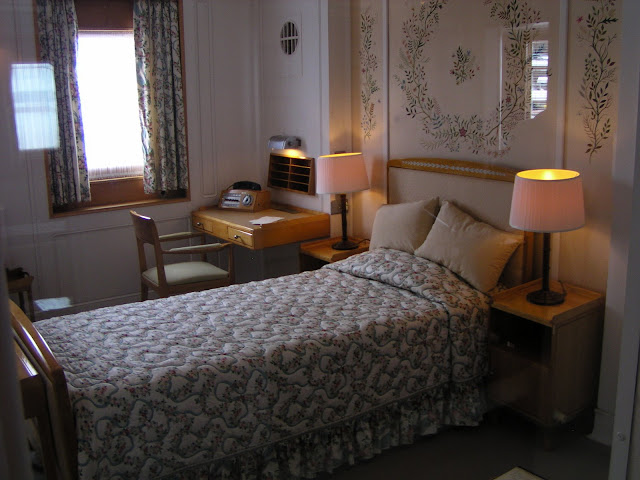 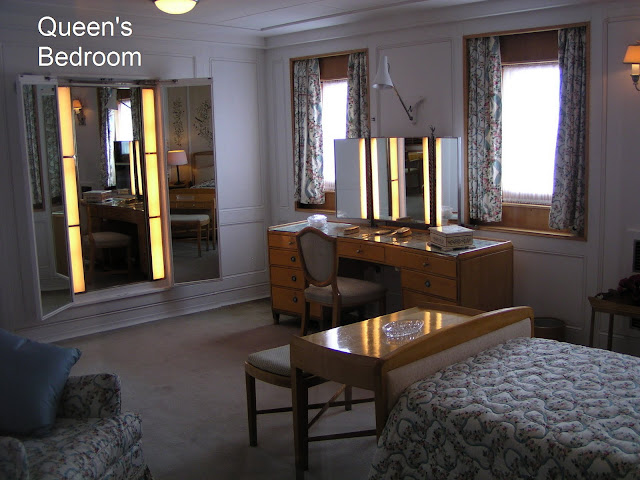 Prince Philip’s (across the hall) was nautical red/white/blue. For some reason the beds looked awfully short; & I know the Prince is a tall man. Then there’s the infamous honeymoon suite w/ a double bed covered w/ a white/gold pheasant print spread. Princess Ann, Prince Andrew, Prince Charles all spent their honeymoons there. Do you know what they all have in common other than their blood relation? They’re all divorced! We were told that the Clinton’s also slept in that suite. I thought they had a great idea…..they have cut large square openings in the walls of the bedrooms & inserted panes of glass. That way you could see all through the room w/o having to go in the room & disturbing anything. Out on one deck enclosed is a glass room was the Queen’s black Rolls Royce Phantom V. We visited the officer’s ward room, officer’s dining room; the not so ornate state D.R. The Queen & Prince Philip each had their own sitting room. 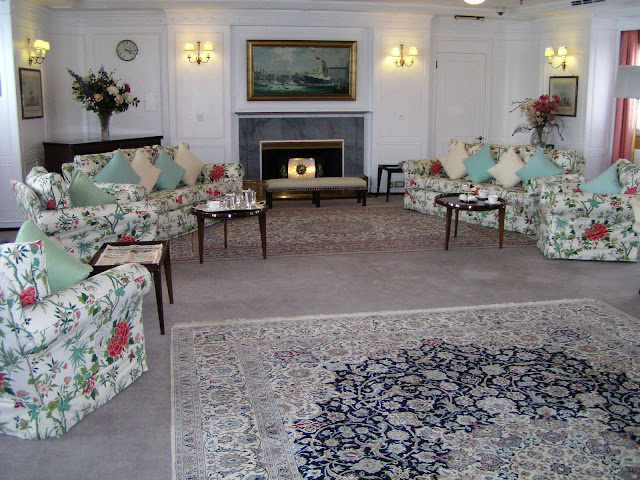 The large drawing room was full of upholstered white & floral print sofas & oriental carpets. Very pretty & “normal”. We also got to see the petty officer’s mess & tiny barracks, the Royal Mariner’s (as in the marine band that accompanied her & guarded her safety) barracks, the Chief Officer’s mess & bar. 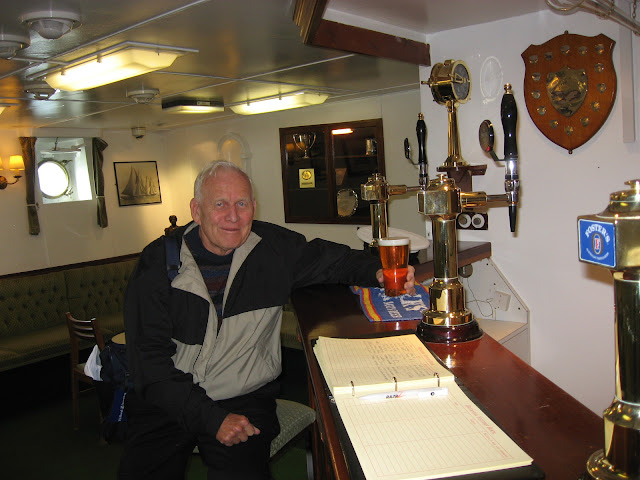 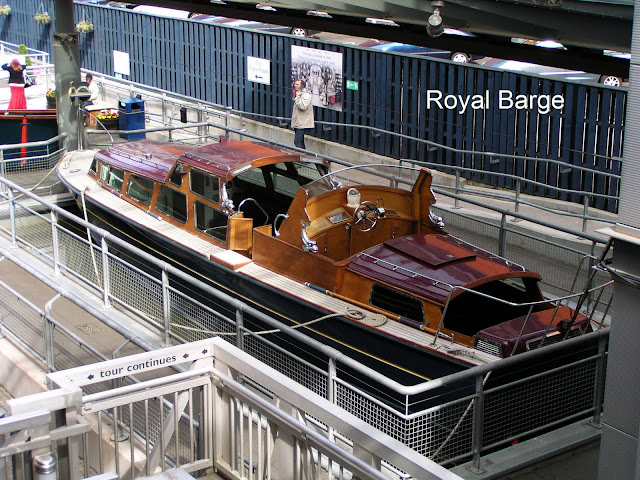 On the way out was passed through the laundry facilities & the engine room. On the dock to the side of Brittania was the Queen’s barge (actually a rich teak wood & silver ornamented motor boat). We had the use of audio phones so we could listen to narration in each of the rooms we visited. It was an outstanding tour; Bill & I were both grinning from ear to ear when we left.
We got back to the ship about 6; & rested a while before going up to the Lido Rest. for dinner. Since we weren’t scheduled to leave Edinburgh (pronounced EDIN-burro, by the way) until midnight, the ship seemed quite empty. I suppose some chose to eat in town. We had another outstanding meal. Since I’m writing this days later, I can’t remember what everybody else ate. As for me, I enjoyed an appetizer of lychees (how I adore these), watermelon, kiwi w/ chopped mint & a mango raspberry sauce. Then I ordered lime marinated grilled scallops (did, somebody say scallops?) w/ garlic, cilantro, hearts of palm & chipotle dressing. Simply fabulous! I also had a small taste of the made to order ziti w/ eggplant, tomato, garlic, basil, shallots & melted mozzarella.
We’d had a big day; but Melita & Bill wanted to stick their head in the show. I went back to the cabin to transfer pictures from the camera & to write some more journal entries. So far, I’ve only managed to upload Day 1 to my AOL Journal. I worked til 10:30. I found my earplugs; & took a sleeping pill. A surefire recipe for a good night’s sleep!
Posted by Unknown at 4:29 PM