6/11 Newcastle Upon Tyne, England
Well, I got practically no sleep; & I learned later that Melita & Bill didn’t either. I couldn’t seem to block out the snoring sound coming from next door, nor the assorted rubbing & creaking noises that go along w/ ship movement at sea. I know I have earplugs somewhere; but where??? Too late for breakfast anywhere; so I ate a banana from my fruit basket. Although it there was a chilly start to the morning, the temps climbed up to the mid 60’s in the afternoon. I met Melita & Bill in the Lido café for an early lunch before our tour. I had some tomato/coppa salad, fixed a taco salad & an unnamed creation from the fixin’s at the taco bar. I took a sundried tomato soft flour tortilla, added taco beef, guacamole, sour cream, onion & cheese. Quite good, if I do say so myself. 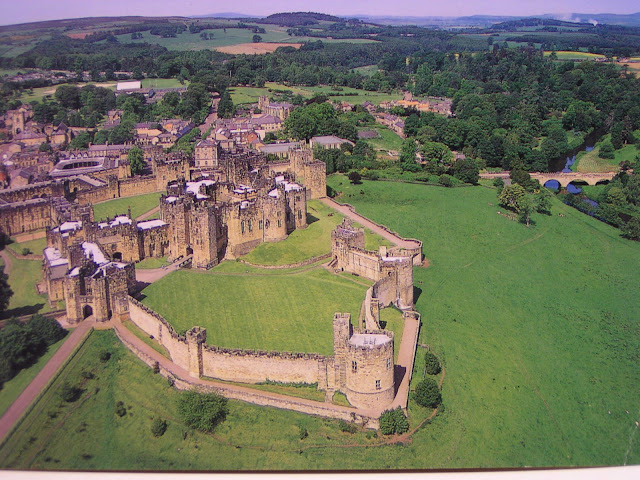 We assembled outside on the pier at 12:20 for our excursion to Alnwick Castle & Botanical Gardens in Northumberland. (And just so you’ll know…..it’s pronounced ANN-ick. Go figure!) Our guide, Claire & driver, David took us through the countryside for a 35 mile (1 hr.) ride. Along the way we saw lots of beef cattle & sheep farms, fields of wheat & barley, & fields of yellow flowers. Claire explained that this was oil seed rape (yes, that’s what she said) from which you make canola oil. She said the ground is like quicksand; & it is possible to drown standing in it. Just so you’ll know why I chose Alnwick Castle to visit…..it has been the set for many a Hollywood movie. Most notably, The Prince of Tides, Beckett & all the Harry Potter movies. At the foot of the long drive into the castle grounds, there is a concrete bridge on top of which is a large white stone lion who’s tail sticks straight out, pointing toward the castle. Once we arrived & entered through an arched gate, the area opened up into a series of towers, turrets & cobbled streets. You walk first into a huge open yard area, called the Outer Bailey. The scene where they were teaching Harry Potter to fly was filmed here. Surrounding most of this area is a high wall w/ a walkway that runs the full length. It is called the “whispering wall”; & Claire said that if you stand on one side of the yard & whisper that it can be heard up on the wall on the other side. This is still a private home of the Percy family (that’s Duke & Duchess, to you & me); & a lot of it was off limits. There was no photography allowed; for those you have to buy the commemorative photo book kindly sold in the gift shop on your way out).
We did get to see an extensive coalport china collection; the library w/ two of their former dogs stuffed & sleeping on the chairs (eerie); a formal dining room & a drawing room filled w/ many antiques, several gorgeous wood inlay desks & 2 huge carved, lacquered Louis XIV chests that are ones of a kind.. We passed through the salon where men were up on scaffolding meticulously applying gold leaf to the ornate ceiling & on humongous mirror frames. You needed to look up constantly as the ceilings in every room were coffered, carved, gilt w/ gold, or frescoed. Such beautifully & painstakingly restored work. We also got to see the small chapel (also seen in the H.P. movies). It was not greatly ornate; but there were well worn tapestries floor to ceiling lining the walls & 2 flags hanging that were so threadbare they had to be ancient. We had about an hour to walk around. Then we reboarded the bus & were driven a few miles to the (contemporary) formal gardens. 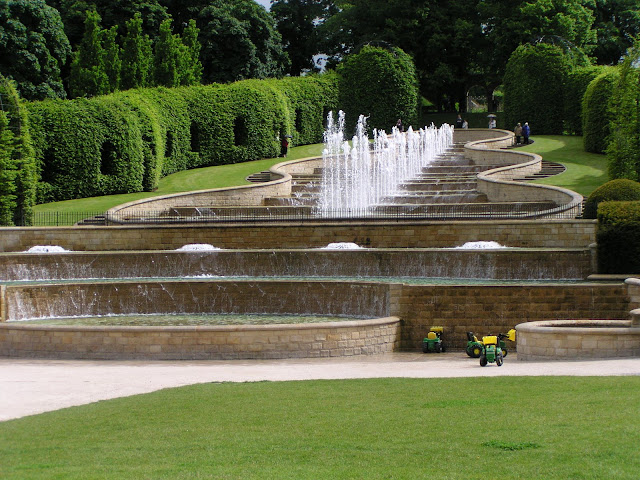 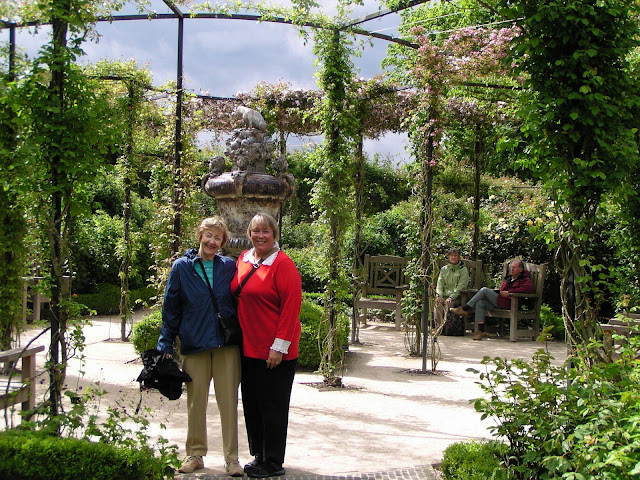 Before we left the bus, Claire told us we must visit the bathrooms, as they have textured glass sinks w/ LED lights. They slowly change colors, from green to blue, to yellow to aqua. Of course, we visited; & of course, I had Melita take my picture in front of them. We had just over an hr. to explore the gardens. When you walk in you’re looking straight up a slight hill & a fountain, called the Cascade. Every half hr. the waters “dance”. She suggested that we follow a certain path that would take us first to through the “interactive” water feature garden (various shapes & sizes of stainless steel fountains that cycle through “water tricks”). Quite amusing. We chose to bypass the bamboo labyrinth; couldn’t take the chance of getting lost in there & missing the rest of the gardens. Then on to the ornamental garden w/ over 16,000 flowering plants such as clematis, hydrangeas, irises, & peonies planted in interesting shaped beds. Climbing a little higher we found the rose garden w/ over 3,000 varities. We are early in the season, so not much was in bloom in either of these gardens. But the few roses that were there had the most intoxicating scents. They smelled like roses used to smell. Once we’d reached the highest point (where we were then looking back down on the cascading waterfall), we were in the tree forest. It was so shady; & the temps seemed to drop at least 10 degrees up in there. We walked fast. As we worked our way back down the left hand side, we came upon the poison garden (full of poisonous plants). I would like to have visited in there as the plants were positioned in unique ways; but time was running close. 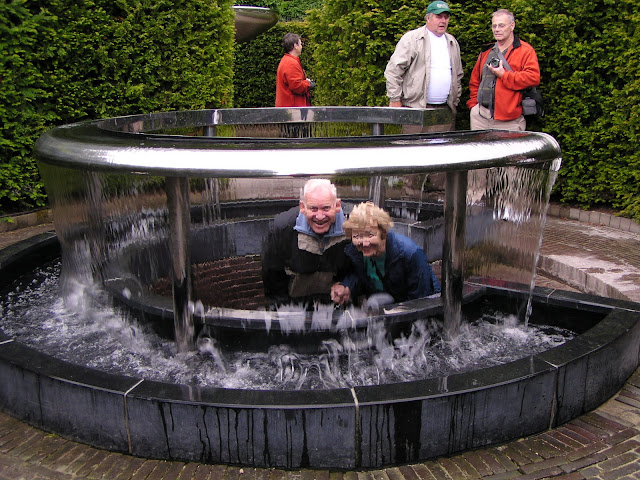 Bill had mentioned seeing an ice cream stand on the way in that sold Newcastle brown ale ice cream (sounds disgusting, doesn’t it). Well, Newcastle is the home of this famous beer; & he happens to be a fan. So, I snuck off to get him a cone. I tasted it; & it had a funny flavor w/ a hint of brown sugar. I don’t think he was impressed; but at least he has bragging rights for having tried it. (This is a man on the quest of patronizing as many pubs as time will allow.) 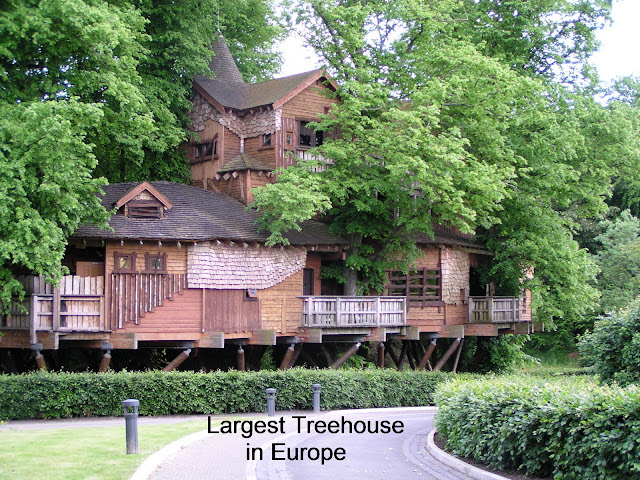 On the way back to the bus we passed through the “largest tree house in Europe”. Actually it is a platform on timber “stilts” that rests in the branches of several huge trees. This platform holds a series of small shops & cafes. We were chilly; so we all picked up cappuccinos to go. The bus had us back to the ship at 6 pm. My DVD was supposed to be returned by 5 pm. I was armed for bear if they gave me a hard time. To think I paid $3 for a movie I never got to watch. But they were nice about it; & said I could take it out for one more night at no charge. Nice try; but there just wouldn’t be enough time.
As soon as we dropped off our bags, we headed to the Lido Rest. for dinner. One good thing about this ship is that they offer the same menu in the Lido as they have in the main D.R. I’m falling in love w/ this meat item called, “coppa”. Not sure what it is (looks like mortadella or pastrami; but usually julienned in these salads); but I must look it up whenever I find enough time to surf the internet. So, I had another coppa salad tonight, this time w/ marinated mushrooms & shaved parmesan. Fabulous! I had an appetizer portion of smoked salmon which had been cured w/ gin, kosher salt, dill & crushed peppercorns served w/ a honey mustard dill dressing. Also a small taste of a roasted baby beet & chile quesadilla w/ jalapeno & poblamo peppers. I also got to taste Melita’s entrée, grilled dill fillet of unicorn (which we learned was a type of fish) w/ orzo pasta salad. Bill & I had the same, lamb shanks w/ a red wine reduction served w/ sautéed greens & mashed potatoes. We had a lovely table right by the window & could watch all the goings on in the port area. We set sail at 8 pm; sunset tonight came about 10:15 pm. I went back to the cabin & transferred the photos from the camera to the computer so I could edit them. I sat there til about midnight; & finally got a shower. I had intended to write in the journal; but felt so tired. I thought I’d fall right asleep; but alas it didn’t come easy. I was determined not to take a sleeping pill again;so I just toughed it out til about 2:30. Note to self: I MUST FIND THOSE DAMN EARPLUGS!!!

with this awesome new &improved hairstyle... u need to update ur all about me pic :)

Looks like ur havn a blast!  Wish I was there :)