I was snoozing soundly when there was a knock on the door at 7:15. Room service, 30 mins. early. My regular guy, Abdul, apologized profusely for waking me up so early; but everyone wanted their breakfast delivered at the same time this morning. I had my regular yogurt & granola & some orange segments. As usual, the yogurt was room temperature (I would think this would be a health dept. infraction). I just stuck it in the ice bucket for a while. The Capt. had told us yesterday that there was a 70% chance of rain, highs in the low 60’s. I was pleasantly surprised when I turned on the TV & saw the sun shining. How can we continue to be so lucky? We were a little late tying up at the pier. Bill was noticing that there is such a small finger of a pier that they were moving from side to side working the bow thrusters trying to get wedged in there just right. We were all touring together (for the last time) this morning; & we were to be in the lounge at 8:50. For once I was ready & waiting. When they called our bus #, we trooped down 4 flights of stairs only to come to a bottleneck at the bottom. This took forever; & made us even later (which will come back to haunt us later). It was so pleasant in the sunshine, I shed my sweatshirt on the way to the bus. I would guess that it eventually got into the mid to upper 60’s before the clouds rolled in this afternoon.


Our local guide, (Mrs.) Bodil, was very good; told great stories & pointed out all the famous (& not so famous) sites along the way. The plan was to go into the city center & catch a tram that would take us into the neighborhoods & up into the higher country for city views. We pulled up next to the tram; & before we could get the bus doors opened, he pulled away (empty). This infuriated Bodil to the point that we heard her say “shit”. She’d forgotten that her mike was on. She gets on her cell phone; & learns that the tram driver was angry because we were late; so he just left us. She & the bus driver were speaking Norwegian rapidly back & forth trying to come up w/ another plan of action. She decided that the bus would take us up & around; & we’d try to pick up the tram on the way back down. 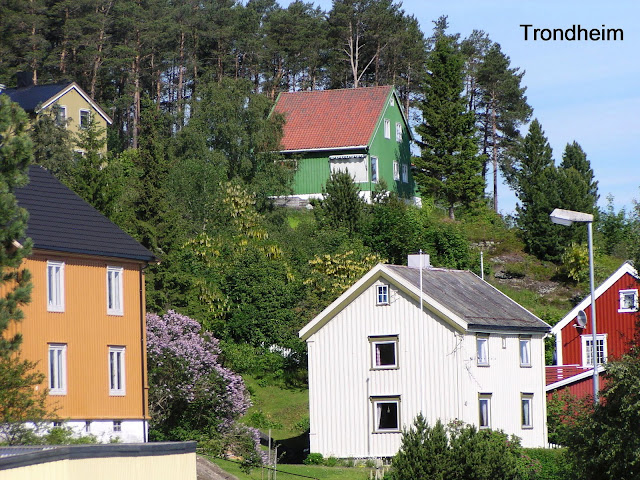 We wound our way through residential areas. Houses brightly painted. She mentioned all the red houses; & how they got that way. Back in the day, when paint was so expensive, some people went to the copper mines & gathered the leftover “crumbs” & mixed it w/ oil to paint their houses. So many did this, that red because the “signature color” of Norwegian houses. You still see the ladders that are attached to the roofs; & she explained that this was to make the chimney sweep’s job easier. There are also some ladder like railings that are attached horizontally on most roofs. As explained to us before, this helps you keep your footing when you get up there to shovel snow off the roof.
We crossed the River Nid that creates a kind of moat around the city center on our way to a high point southwest of the city center. We pass a lot of lovely homes, “golden rain” trees, huge lilac bushes & forested areas. The bus stopped so we could take photos of the city & harbour below. We could see the ship; & just off shore, Munkholmen (Monk Island). This was originally an execution ground, later a Benedictine Monastery, & today a popular beach & restaurant area. We drove a little further up, where our wayward tram was waiting for us. The trip back down was rather lackluster as it sped past everything. I would imagine that the pace would have been more relaxed & photogenic on the way up the mountain.

Oh, well. Back in the city, we reboarded the bus heading back to the ship. The bus stopped briefly in front of the Nidaros Cathedral; & a few people got off. Bill had told the guide we wanted to visit a special pub that’s written up in the travel guides; & she promised to warn us when it was coming up. As the bus pulled away from the Cathedral & rounded a curve in the road, I looked down by the river & saw the pub. I hollered to Bill from the back of the bus; & told him that we’d just passed it. He asked the guide to stop; but they couldn’t until we reached the next bus stop. We got off in front of the Radisson Hotel; & we thought we should take advantage of their facilities before we took off on foot. We retraced our route on a sidewalk up above the wharf area that had colorful businesses on each bank of the river below. 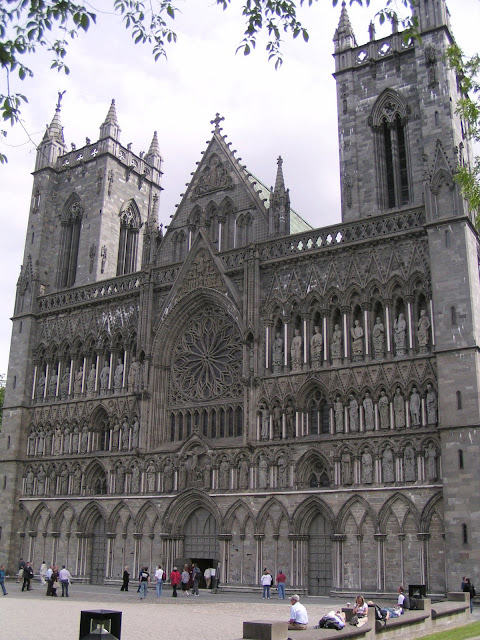 We made our way back to the Cathedral to get a closer look. It is a huge building, made of soapstone in the 11th & 12th centuries. The soft soapstone crumbles; & from the looks of the scaffolding, they must be constantly trying to restore it. The front is beautiful; but the south side is the most impressive. A huge arched doorway, topped by a very large rosette shaped stained glass window, flanked on both sides by square bell towers. There is a courtyard area here where everyone seemed to sit & ponder & people watch. We rested & took photos. The Archbishop’s house, a military museum/academy & a museum all surround this courtyard. As the clouds started rolling in, we continued our walk back to the wharf area in search of “Bill’s pub”. 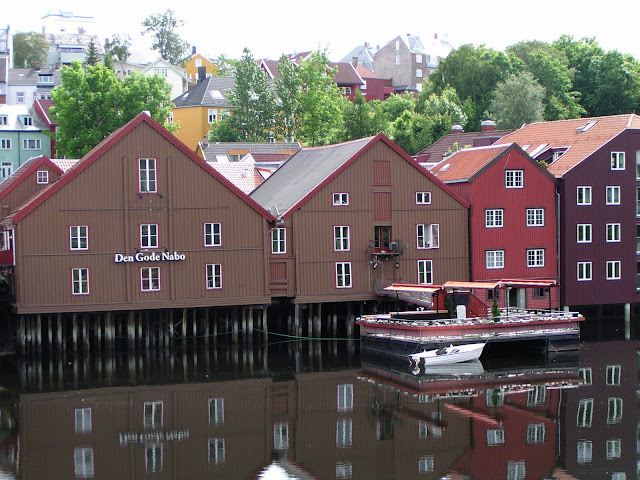 We had both read about “Den Gode Nabo” (The Good Neighbor Pub); & Bill had it on his list of “must sees”. They didn’t open til 1pm, so we wandered around photographing the historic area known as “Bakklandet”. You cross an old red wooden bridge to reach the area. The view from the middle of the bridge on both sides is charming. There was still enough sunshine so that the reflection of the brightly colored building on the water made great photos. There was the sweet smell of lilac from the many bushes along the sidewalk. We pulled off a stem to bring back w/ us. We wandered around reading restaurant menus & watching the people. Bill noticed a bicycle lift across the street. I had never seen one in person; & we were anxious for someone to come up & actually try to use it. This one happens to be the first one built in the world. You put your foot on this metal “holder”, put in your tokens or pass card, & the track moves you & your bike up this steep hill. One guy was attempting to use it; but his card wouldn’t work. Bill & I stand there, camera ready, while he went to get another card. He came back shortly; & tried again. Still wouldn’t work, coming to the assumption that it was “out of order”. That was as close as I was to get to seeing this contraption in operation. By this time it was 1; & the pub was finally opened. 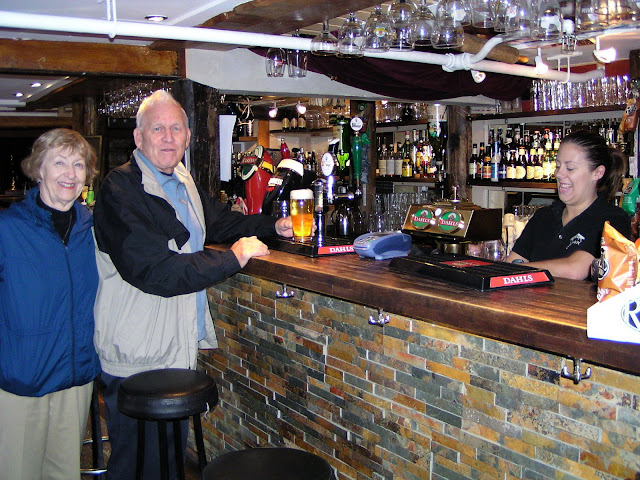 You enter this pub below street level. To say it’s rustic is putting it mildly. The tattered wooden floors have little steps up & steps down all the way into the back where the ceiling & walls look to be made of raw tree trunks. Mismatched tables & chairs; 2 bright neon Wurlitzer juke boxes. There is a ramp that goes out the back door to a floating “beer garden” platform on pontoons right on the Nid River. It reeked of neighborhood charm. We were the first customers of the day; & the bar mistress was really sweet. Bill inquired about all the different types of beer that she had on tap. He chose a local beer called “Dahl’s”. Melita & I both tasted it; loved it & had to have some ourselves. Bill nearly fainted & fell out. 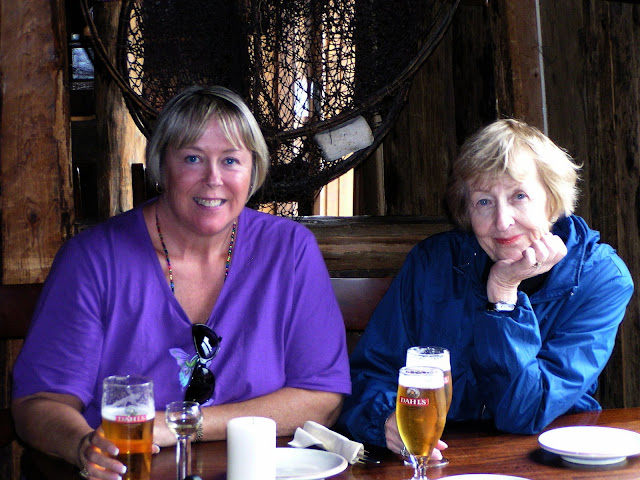 The menu selection was very limited (& expensive). We chose a “create your own” pizza & nachos to go w/ our beer. There was a salad/pizza bar to make your selections from. She handed us a pizza crust partially baked w/ tomato sauce spread over it. Melita & I went over & added our own toppings: a shaved (almost proscuitto type) ham, onion, mushroom, red/yellow peppers, jalapenos & lots of cheese. We handed it back to her to be put under the broiler. Soon she came out w/ this delicious smelling pizza & a tray of nachos w/ melted cheese, sour cream & salsa. It was delicious; & we scarfed it down. When in Rome…..Bill ordered a glass of that killer Aquavit; & tried an Oslo brewed lager. We left there stuffed & happy. The bar mistress called us a cab which picked us up at the coffee shop across the street. Melita had heard about this “chile” coffee that she was dying to try. She let us taste it during the cab ride. It was good; tasted nothing of chili or chile. Bill & I decided it was just a plain extra mocha coffee; but who knows. We got back to the ship at 2:30 (sailaway at 4 pm).
We each went back to our cabins; completely sated w/ food & drink & everyone fell asleep. I slept 3 hrs. Bill’s decided that instead of Ambien to get to sleep, he should buy a bottle of Aquavit for the cabin. Melita’s take on it was all the carbs we’d had at lunch. Whatever it was, we all took really nice, long naps. Bill said it rained lightly while we were sleeping. Melita called at 6 to say we’d eat up in the Lido restaurant again; & to meet there at 7:15. I cranked up the computer & started on the journal & photos until time to go up.
Melita had already lectured me that since I had been so “bad” at lunch w/ the pizza & beer, I HAD to be careful tonight. She wouldn’t let me have any beef or pork; & I didn’t want wahoo. So, I had a stuffed bell pepper (ate more pepper than rice); a few spoons full of 5 onion soup (Vidalia, Spanish, shallots, red & white onions in a cream base); & a big salad from the salad bar. This seemed to make her happy w/ me again; & I was full. They went to the 8:30 “Liar’s Club” show, played in the casino awhile & then visited the Chocolate Extravaganza buffet by the Lido pool at 10. I went back to the cabin to “work”; & then up to photograph (but not partake of) the chocolate. Long tables laden w/ chocolate confections & ice carvings completely surrounded the Lido pool. I got my pictures & quickly left to avoid the temptation. Then I took my normal seat in Explorer’s Lounge to upload my journal entries. Went back downstairs about 1 am. Still need to shower; have another early morning tour tomorrow.
Posted by Unknown at 6:13 PM