6/20 Geiranger, Norway
Woke up at 6:45 to the sound of the winches lowering the tenders. We were making a 1 hr. service call at the town of Hellesylt to let some passengers off who were taking full day tours. I wanted to but couldn’t go back to sleep. I turned on the TV to look at the view from the bridge. It looked mostly sunny. Could the Capt’s forecast be wrong again? Room service came at 8:10; the usual breakfast, only this morning I got pineapple/orange yogurt (that’s a new one on me). Melita & Bill have been getting these exotic flavored yogurts; & so far they kept bringing me raspberry.
I rushed to get up to the Queen’s Lounge by 8:50 for our tour’s departure. We waited & waited….. Seems they were having trouble w/ the gangway platform; we are tendering this morning into the town of Geiranger. The tour left 35 mins. late. When we boarded the bus it was 9:50. Our driver, Jesper & lovely guide, Kristina were delightful. Kristina is Italian; but spoke perfect English (& very good Norwegian, at least well enough to converse w/ Jesper). She was funny, informative, & didn’t babble any boring nonsense as some of them have. 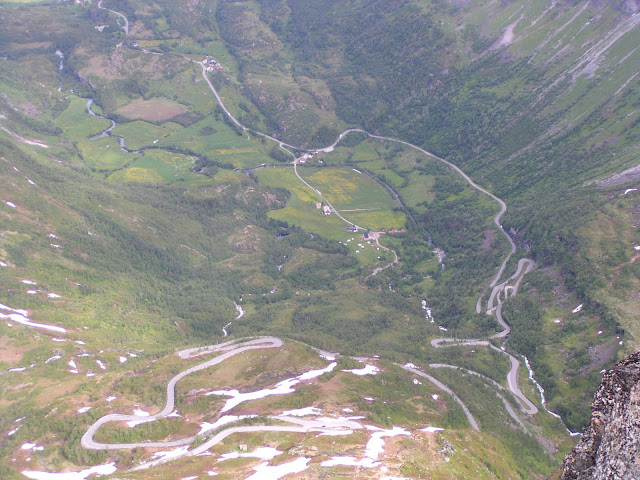 Our drive up to Mt. Dalsnibba is 19 miles; 70 (180 degree) hairpin turns. Melita would have fainted, I’m sure. It was partly to mostly cloudy, mid 50’s, w/ an occasional mist of rain. There are waterfalls everywhere you turn. The higher we went the snow got deeper & deeper & the lovely spring flowers & green grass became very sparse. She told us that some of it was fresh snow from last week. About halfway up we passed a resort area on a huge lake (called Deep Lake), that stays frozen 10 months of the year. When it does thaw, the water is a pale electric blue. We could see the beginnings of some melting around the edges. 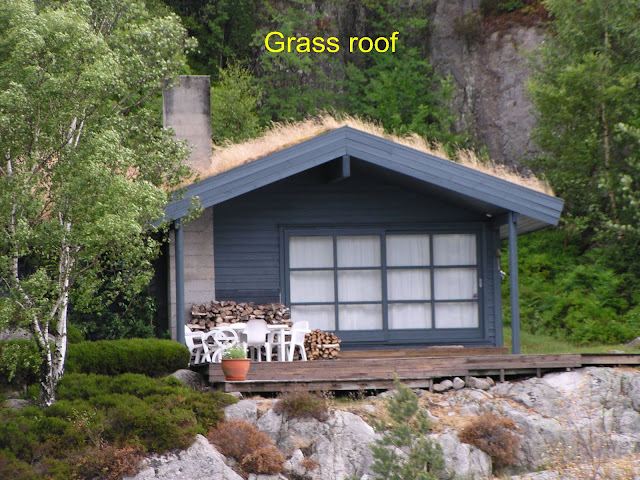 We spotted quite a few houses that had grass growing on their roofs. I inquired how & why this is done. She says that they build a wood roof, cover it w/ dried birch wood, some soil & then squares of grass “plugs”. This provides good insulation all year round. Eureka! Another ingenious idea. Kristina kept asking us if we were nervous on the road; & some said they were. Then Jesper got on the mike & said, “Do, what I do…..close your eyes”! They were quite a pair.
We spent about 15 mins. up on the top of the mountain. The views are spectacular. And stupid me on this day decided I didn’t need my heavy jacket & gloves since I didn’t need it up on the top of the North Cape. How cold could it get on a mountain this much further south??? A LOT. I had on long sleeves, & my long hooded sweatshirt. After 5 mins. of taking photos, my fingers were frozen. I know w/ the wind it had to be well below freezing up there. Just before we got back on the bus, a few snow flakes flurried about. 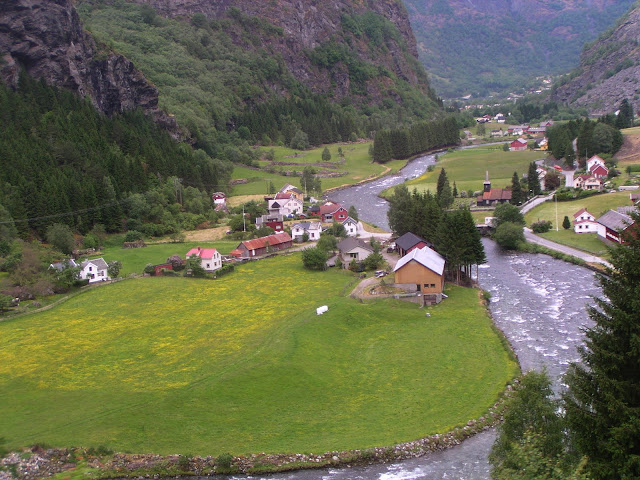 One thing I noticed on the way back down (or rather didn’t notice), wildlife. We passed a goat (cheese) farm w/ a lot of goats; but nothing wild. We made a photo stop at an area called Flydalsyjuvet. How do you pronounce that, you ask? I have no idea. Kristina did tell us that Flydal is a family name; & that syjuvet means gorge. But this is the spot where the photos that you see in all the cruise & travel brochures of the ships at anchor down deep in the gorge are taken. 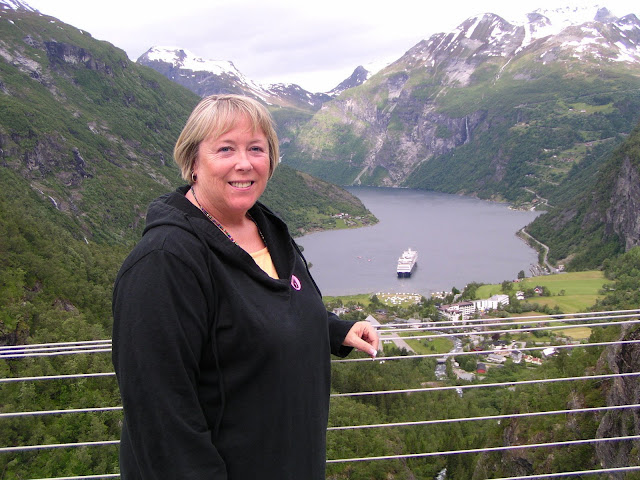 On the return trip Kristina walked through the bus, personally speaking to everyone & asking if anyone had any questions. In all my travels, I’ve never encountered anybody as good at their job as she is. When we reached the port area, I was surprised that the bus kept going. We were continuing a little further along the scenic Eagle Rd. More hairpin turns (no guard rails) passing some small farms. The purpose of this leg of the journey was to take us to another photo spot to get a (sort of side angle) view of the Seven Sisters Waterfall. It is THE waterfall in this area. Called 7 sisters because the flow branches off into 7 smaller waterfalls. Not sure this stop was worth the trip as the angle was awkward; & we’re going to sail right under it on our way out of the fjord this afternoon. 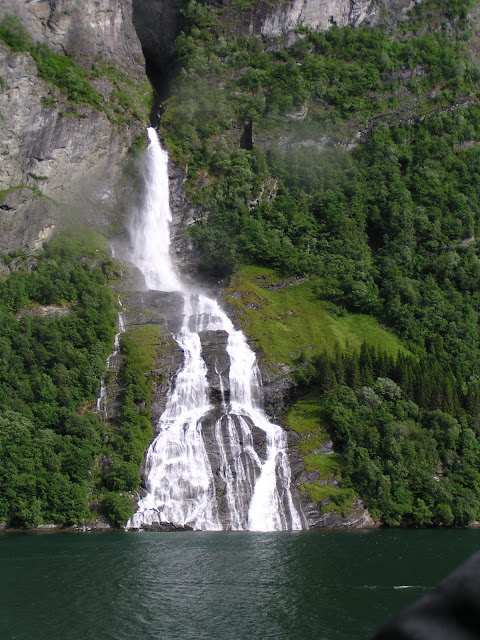 When our tour ended, I walked around the small “town” area. Even though the temps were cool, the sunshine was warm & there was no wind to speak of. I watched ferries load cars, walked up the hill a ways taking pictures of the beautiful, unusual flowers, looked in the shops & lusted after their special ice cream made w/ triple cream!
I boarded a tender back to the ship about 1:45. I called Melita & Bill’s cabin when I got back; but got no answer. I had called them to say goodbye this morning; & a sleeping Melita answered & said she wasn’t able to go to sleep til nearly 6 this morning. So, I didn’t know if she was still sleeping now or if they were off the ship. I went to lunch in the Lido & had a taste of several of the salads: penne pasta w/ roast chicken; carrot raisin & walnut; ham cheese & onion; & a little “boat” made from an orange filled w/ the most delicious spicy Thai beef salad. I was bad……had a pork chop & a tiny bit of mashed potatoes. See what happens when Melita’s not there to hold my hand???

I stepped out on the aft deck to take some more photos (I shot 295 today); & it was spitting rain. So, I came in & took a 1½ nap. Melita had called & left voice mail that they hadn’t gotten off the ship at all; & that she was about to lay down & take a nap. I woke up just before 5 when the Capt. made the announcement that we were about to lift anchor. (By the way, this is the first time that we’ve actually anchored. The other ports where we couldn’t tie up were so deep that an anchor was useless; & we just had to drift (have I already told you this?). I put on my warmest everything & went up to take photos as we sailed out of Geirangerfjord & then out of Sunnylvsfjord. (It will take 6 hours before we are out of the fjords & back into the open Norwegian Sea.) There was still a light rain & a few spots of sun. At one point there was a small rainbow behind the ship that stretched from one side of the mountain to the other. 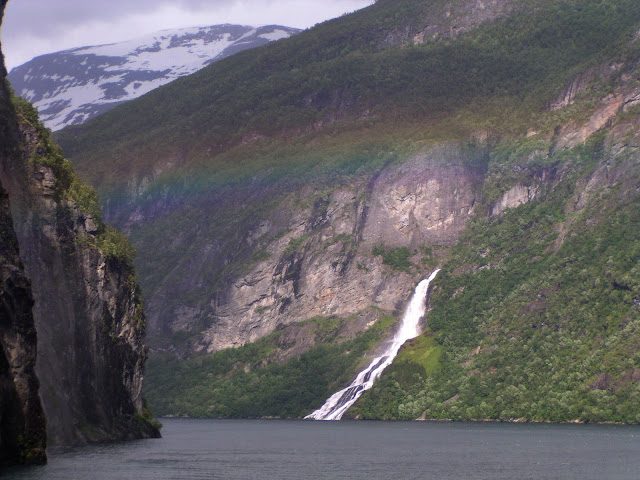 We passed in front of Seven Sisters waterfall, Bridal Veil falls & the Suitor waterfall (can you tell there’s a mythological story forming here?). I went all around looking for Melita & Bill; all the while they were walking around looking for me. Funny how you run into the same people over & over; yet when you’re looking for someone it’s like a needle in a haystack. So, I went to their cabin when I came back down; & they were there thinking about getting ready for dinner. We shared the stories from our day; & made plans to meet at the dining room at 8.
Bill asked for a big table; hoping some interesting people would join us. We’d given up hope; when finally at 8:20, these 2 really interesting ladies joined our table. Mary & Angela from Barbados, now from Toronto. They’ve traveled a lot too; & we talked & laughed for hours. Tonight’s dinner was smoked salmon rolled into cornets & filled w/ salmon, chive & caper tartar. Bill let me taste his Dutch bacon & cabbage soup (fabulous); & I had an outstanding cauliflower & roasted almond soup. Melita & I had the Wiener schnitzel w/ green beans & lyonaise potatoes. Bill had the wild Norwegian salmon w/ roasted vegetables & potatoes. For dessert I had sugar free triple chocolate ice cream; & Melita let me taste her pear William flambé (sliced pears sautéed in coffee sauce w/ pear William liquor) & vanilla ice cream. Neither of us were impressed.
We went up to wander around the shops & look in the photo gallery. We parted ways at 10:30. Bill was in the sports bar watching soccer; & Melita headed to the slot machines. I came back to the cabin & spent 2 hrs. working on the journal. Too tired to edit today’s photos; so I’ll wait another day before uploading this to AOL. We actually did have a sunset tonight at 11:20, yet I notice on the bridge camera that it doesn’t get totally dark outside. Sunrise in the morning is at 4:10 (my, the nights are getting so long).
Posted by Unknown at 10:45 AM