What little sleep I got was pretty good; there just wasn’t enough of it. I woke up when I heard that “winch sound” about 7 am; but fell back asleep. Then I woke up at 8 to go to the bathroom. I knew we were making a short stop at Vik from 7-8 am to let some passengers off that were taking full day tours. I made the mistake of turning on the TV & looking at the view from the bridge camera. It was sunny; & I had this funny feeling. I said to myself, “Self, you better get out on deck to watch us sail deeper into the fjords because it could well be raining when we sail back out tonight”. So, I cancelled my room service order; dressed snug & warm; & headed up to the Lido buffet. At this time of the morning it was about 50 degrees; considered warm for this neck of the woods. As long as the sun wasn’t behind a cloud, it was tolerable. 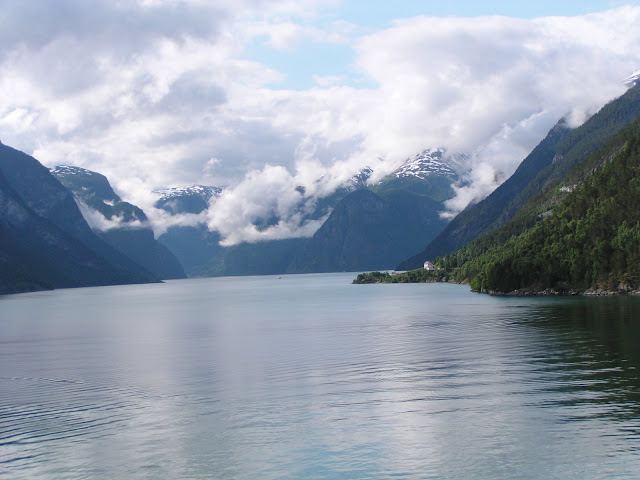 People were out everywhere, running from one side of the ship to the other taking photos. This is considered some of the most magnificent scenery in the world. I managed to get some breakfast between all the “running & shooting”. This morning I had Swiss muslix. What make it Swiss, you ask? Finely diced canteloupe, watermelon & raisons. I know, it didn’t make sense to me either. I had some smoked salmon & an onion & cheese omelet. Since Melita wasn’t here to rein me in, I had ¼ piece of banana nut bread French toast. And it was soo goooood! 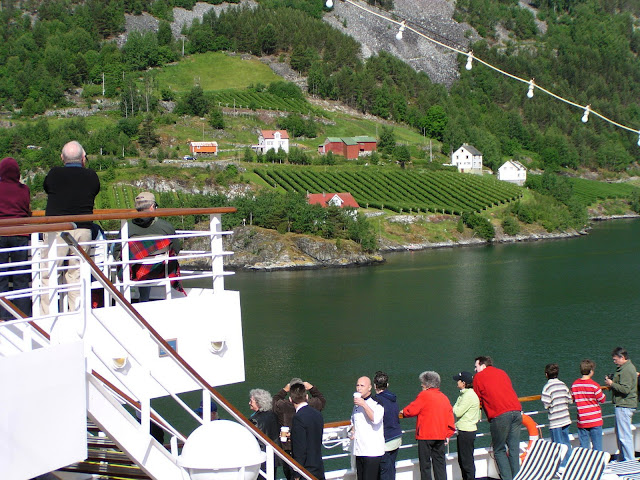 Back outside to the scenery. Sailing into the Sognefjord (which for those who might not know; fjords are very deep water channels that twist & turn w/ high mountains on each side), you can’t take your eyes off the scenery for a second. Sognefjord is the deepest & longest (over 100 miles) in Norway; & it takes you deep into the some of the country’s most charming towns/villages. About 9:30, this idiot passenger stepped into the outdoor aft pool & started swimming laps. This pool is filled w/ sea water, mind you. I shudder to think how cold it was. Anyway, we made sharp left turns & then sharp right turns. All along the way there were small clusters of houses (not big enough to even be considered a village) hugging the shoreline at the base of these mountains. In this respect, this is very reminiscent of when Katie & I sailed into the “fjords” of Montenegro several years ago. And that time, I speculated that that must be what it’s like in the Norwegian fjords. And every so often you could look up, maybe half way up the mountain; & there would sit this lone house. There were no apparent roads to it. We learned later that people who live that high up will take their boats into “town” buy their supplies; & then they hike up the mountain w/ their “stuff”. Can you imagine making these infrequent trips for supplies; & coming home loaded w/ stuff? Knowing that you had to schlep it to the top???
We all ate an early lunch at the buffet before our 12:40 tour. I had some sushi, prosciutto, a small taste each of greek salad, a chopped apple & bleu cheese salad & a cup of the pasta fagioli. While we were sitting there we made the right turn into the much narrower Aurlandfjord on our way into Flam (which is pronounced FLOAM). We were running a little ahead of schedule, so the Capt. & the local pilot decided to take another right turn into an even narrower fjord called Naeroy. We could only go in a little way before it got too narrow for them to turn the ship around. But making this little side trip, cost us. We were late arriving in Flam; & this made us late getting on our tours. We had to tender in since there was another ship at the only berth in town. They couldn’t tender the passengers fast enough; & our tour started an hour late (which you will learn later caused a nightmare of a problem).

Flam is just barely a town; w/ a short street w/ a few restaurants & shops. We only had to walk about a hundred paces to step aboard the Flam railway train. This train is over 60 years old & travels tracks that have been laid through blasted mountains of rock & wilderness. An amazing feat; & the scenery is truly breathtaking. Brightly painted houses, farms & fields of sheep dot the route. With all the snow up in the mountains, there are hundreds of waterfalls cascading hundred of feet down the sides of the mountain. These run into wide streams of rushing water that meanders through or alongside most of these towns. They’ve managed to harness this water power; & put it to good use. Melita wasn’t too excited about making this tour because she’s not fond of steep inclines. But this was so gradual, due to all the serpentine twists. In fact, she ended up having a great time. It began to get more cloudy as the morning went on. 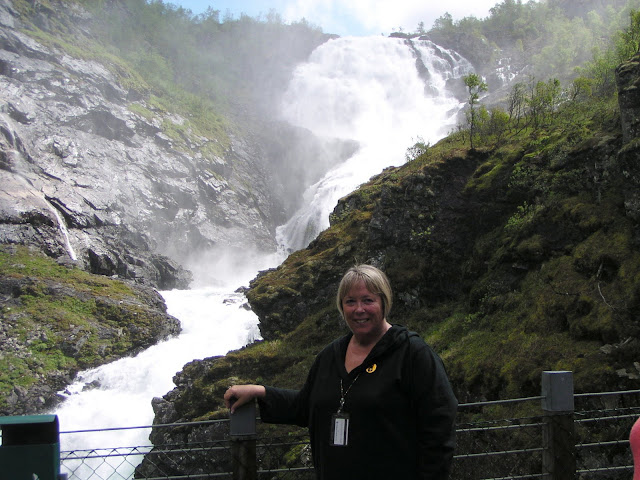 About half way up to our destination, the train makes a stop at the magnificent Kjosfossen Falls (no, I do not know how to pronounce it). There is a platform that you can walk out on to take photos. You are close enough that the mist rains down on you. All of a sudden this kind of eery flute music starts to play & two women in flowing costumes appear on rock formations that jut out & in front of the falls. They wave their arms as if to dance & slowly step down & out of sight; only to pop up several yards away. There is local legend to these fairy waifs; but unfortunately I don’t know that either. (I’m sleep deprived, remember?). Back on the train we proceed to the stop at Vatnahalsen (which I learned: vat means water & halsen means neck/throat). It is literally at the upper most head of the gorge.

The Vatnahalsen Hotel was our destination for heart shaped pancakes w/ a slight vanilla flavor, accompanied by raspberry jam & a cross between sour cream & English clotted cream. While we were seated in their various dining rooms enjoying the scenery, it started to rain (heavily). I thought, oh no, our luck w/ the weather has finally run out. We had to put on our rain ponchos & umbrellas out to walk next door to the obligatory souvenir shop. We had about an hr. until we were to catch the train on the way back down. Just before our 4 pm departure the rain stopped. As we stepped out to the platform & looked up, we realized that while we were seeing the rain just a few hundred feet up on the mountain top there was new fallen snow. We learned later that some other passengers were at elevations where they experienced sleet. It was quite cool up there; but once the sun came back out after the rain, it was tolerable (probably low 50’s).

When we got back down to sea level in Flam, the Rotterdam had been able to tie up at the dock. We had just a few mins. to look in the shops; & pretty soon the ship’s whistle started blowing incessantly. As in, “get the hell back; I want to leave”. We heard that another tour (a combo boat & train tour) wasn’t back yet; so we waited another half hour. Then we pushed away. I assumed that everyone was back onboard. In a little while the Capt. makes an announcement that the missing passengers were on their way to the ship. He was to stop in the middle of the fjord & wait for the tour boat to bring the Pax. I can’t believe he actually left w/o them. We waited & waited; you could hear people on deck bitchin’ & moanin’. Finally this boat pulls up to the lowest deck used for tendering; but they were having trouble maneuvering the boat alongside close enough for the Pax. to make their way over. They’d tried & tried for almost an hour. Finally the Capt. decided to lower one of our lifeboats & transfer them over. After a 2 hr. delay, we were finally under way again.

Melita & Bill went back to rest a little & shower for dinner. I bundled up again & went out to the back deck to watch the scenery on our way back out of the fjords. By now (6 pm) the sun is out brightly, but it’s quite windy. And I’m out there bundled up in a fleece hoodie, a jacket w/ hood over my head & gloves. The scenery just goes on forever. Some of it I hadn’t seen this morning because it took place before I got up on deck. Melita & Bill found me outside; & we ate at the Lido buffet so we could enjoy the passing scenery from the big picture windows. Tonight I had some prosciutto & melon (guess I can now add prosciutto to “my obsession list”); a small cup of bacon cedar cheese soup (very, very good); a skewer of grilled scallops (here I go again) & a thick slab or rare prime rib. I thought Melita was going to have a cow. She looked at me like “you shouldn’t be doing that”. So, I ate only a little bit of it & wrapped the rest for my breakfast tomorrow (I shouldn’t be doing it then either). 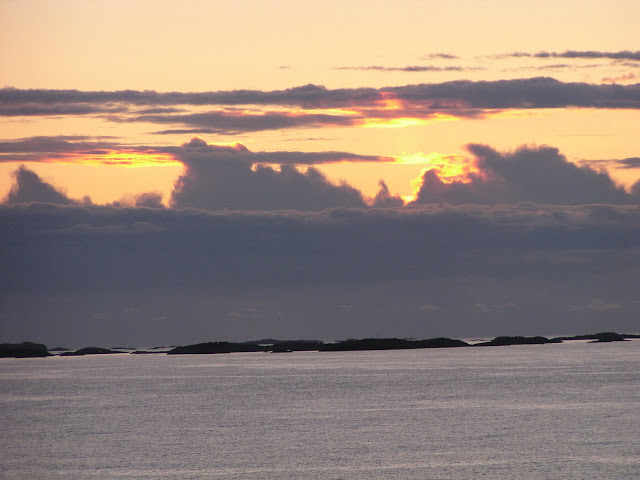 At 9, they went to the show; a singer who looks & sounds like Neil Diamond. They said it was a great show. I changed into even warmer clothes, found a table by an electrical outlet in the Lido Café where I sat for the next 4hours typing this journal & transferring today’s (176) pictures from the camera to the computer. When I went to my cabin at 1 am, it was just about totally dark. I took a nice sunset photo about 11:45 pm. Sunrise tomorrow morning is supposed to be 4:10 am. There’s definitely a sleeping pill in my future tonight. Sea day tomorrow; & I’m staying in bed until my cabin steward kicks me out to clean!
Posted by Unknown at 4:35 PM

Wow, you look at least 20 years younger in the new "all about me" picture!!!