I wondered if the day would ever come.  Even though my luggage started vacation 2 weeks before I did, I was barely functioning at home with a sinus infection.  Two doctor visits, 2 rounds of antibiotics; nothing short of death was going to squash this voyage!

No, I wasn’t looking forward to getting up at 0 dark 30; or feeling like a voodoo doll with needles penetrating my sinus cavities in a pressurized aircraft cabin.  But I lived to tell the tale.  Sorry, I’ve gotten a little ahead of myself.


I didn’t realize that Continental was going to call me 3 hrs. (3 am) before departure, just to tell me my plane was on schedule.  But it made for a nice wakeup call (even if it was a half hour earlier than my set alarm).  Normally, I’m just getting to sleep real good about this time of morning.  But sometimes, you just gotta bite the bullet! 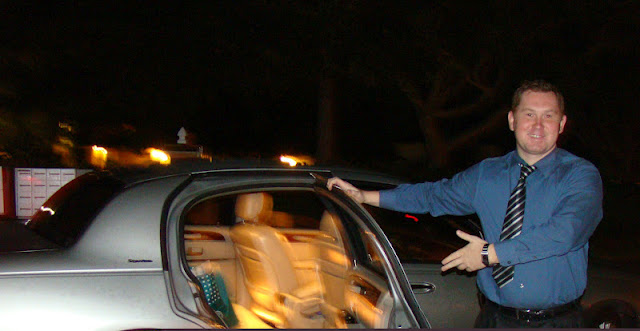 At 4:30 my driver, Vitaliy, (complements of Preferred Travel Services) arrived in a lovely silver town car. Nobody awake in my neighborhood, so I had to take the photo myself. He delivered me to the airport a little after 5. 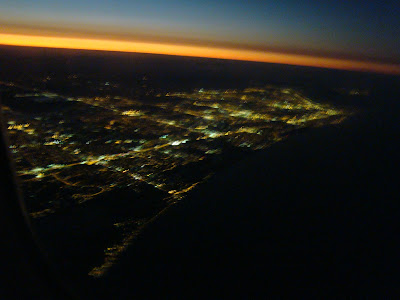 A pitifully poor picture of this morning's FL sunrise.  Something that I never see.


I dozed a few times on the first leg of my flight.  It was stormy on the descent into Houston; & at that point I could no longer hear out of my left ear.  I yawned, I chewed, I tried pinching my nose & blowing.  Have you ever done that until you get this little gush of air that shoots out of the little hole on the inside corner of your eye?  TMI??? 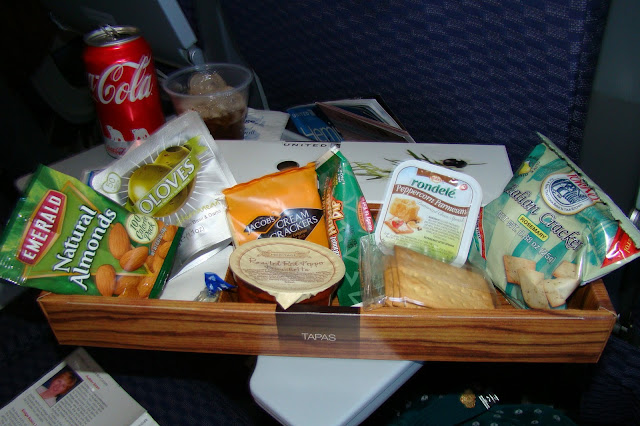 Anyway, I was able to get a whole row to myself between Houston & LA.  Was hungry enough to spend $8.49 for a real fancy ‘tapas box’.  It was presented in a faux (i.e. cardboard) wooden-look box (sort of like the Nobu Box in Silk Road).  It had a really nice assortment of things: roasted red pepper bruschetta to go on rosemary flavored crackers; peppercorn parmesan cheese spread to go on something called ‘cream’ crackers; hummus to spread on olive oil & sea salt crackers; a bag of olives in basil & garlic; bag of almonds; & an ouzo flavored mint! 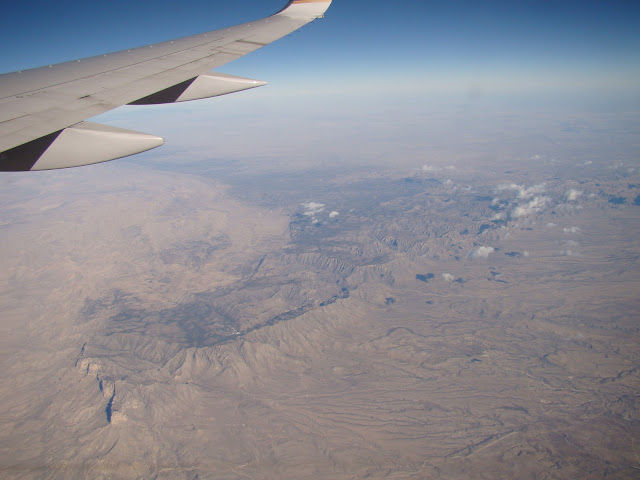 By now, I was just beginning to really wake up, so I pulled out my Bridge Basics handbook; & began studying for my upcoming onboard bridge lessons.  I pulled out the camera as the scenery outside the plane window was becoming interesting.  After flying over all that flat land the entire width of the state of Texas; the minute we flew over the border of New Mexico....instant mountains.  Our route took us directly over Phoenix, which from the sky looks like a grid system. 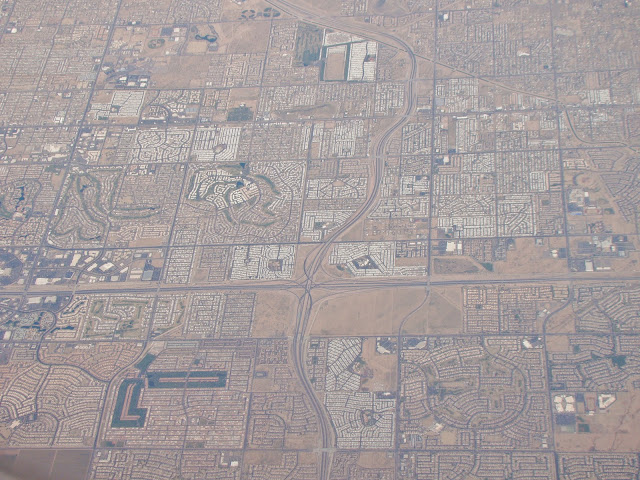 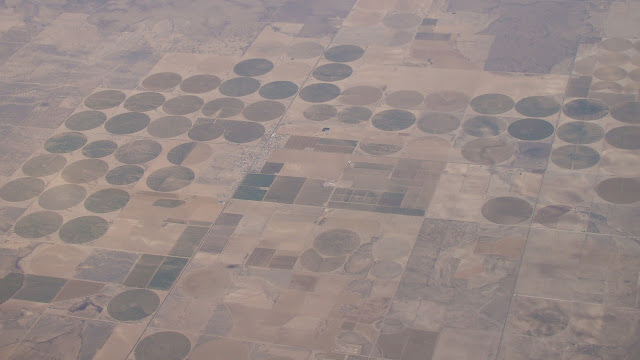 I remembered flying out of LA at midnight one night on the way to Tahiti.  I couldn't believe that the lights spread as far as the eye could see in all directions.  Although not as shocking in the daytime; but still one ginormous city! 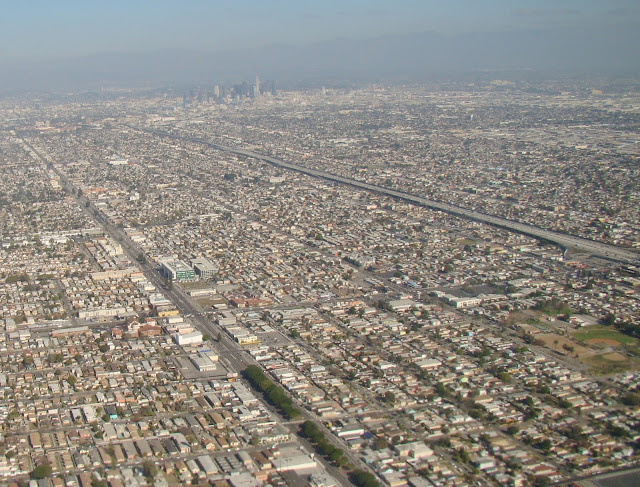 There was a lull in the traffic; but I still found 14 lanes very confusing.  How do these people do this day after day? 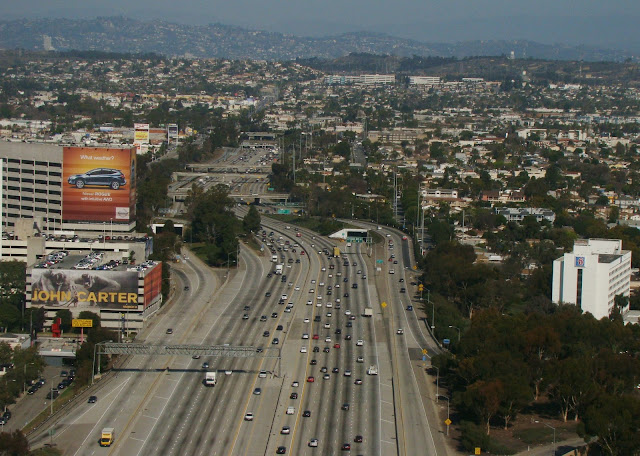 We landed just before noon; & the walk to ground transportation was soooooo far, I had to stop & rest several times.  Even on wheels, my carryon bag (which is weighted down with TONS of electronic gadgets, the companion power cords, etc.) is burdensome.   I will definitely reassess this on my return. 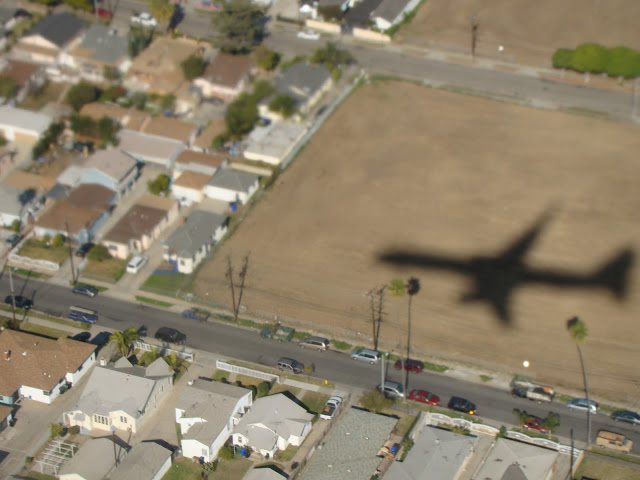 It's a little creepy watching the shadow of your plane about to crash into some houses! 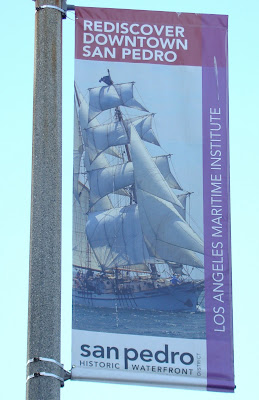 I found the Super Shuttle stand right away; & only had to wait about 5 mins.  Good thing cause it was frigid-ass cold in LA today (upper 50’s).  I was the last one to get on the mini bus; & the first one off at the Crowne Plaza in San Pedro (PEE-dro).  It’s within spitting distance of the cruise terminal; & a really neat suburban area. 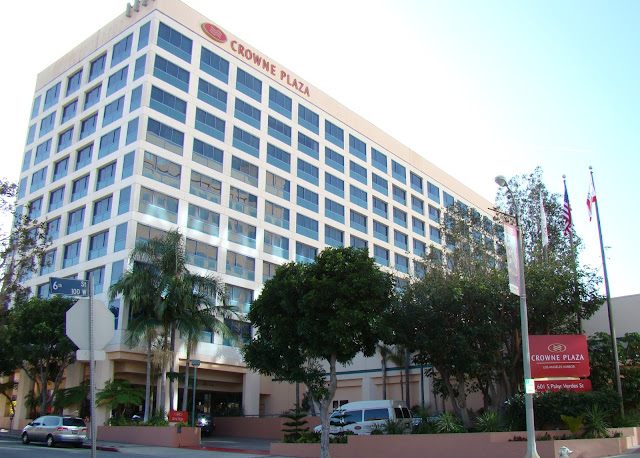 They had a room ready when I arrived about 12:30; & I was relieved to lighten my load.  The hotel is really nice; with a very helpful reception desk staff.  My room was quite spacious; but the air felt a little damp & musty.  Even after several hours with the A/C running, it still seemed a little ‘off’. 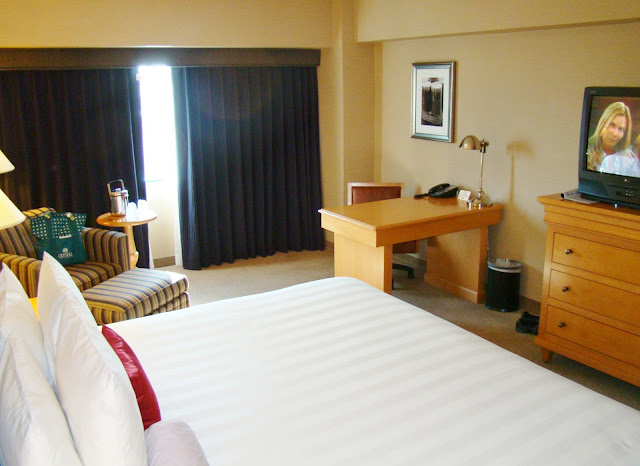 I asked Angie at the desk; & she said San Pedro is perfectly safe to walk around.  It was sunny, but brisk; & their streets have a little incline to them.  Something this out of shape body found challenging.  I started walking toward the water (which was downhill) to look at the Maritime Museum & some lovely fountains & monuments right along Harbor Blvd. 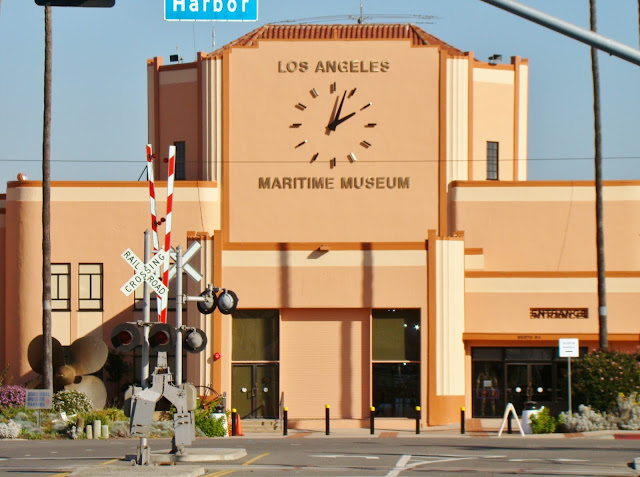 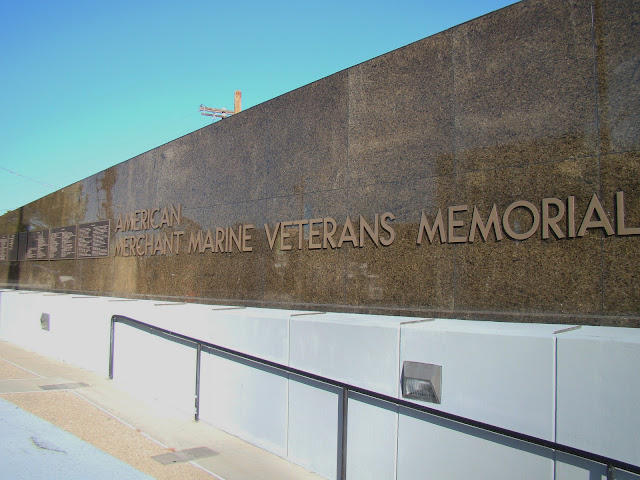 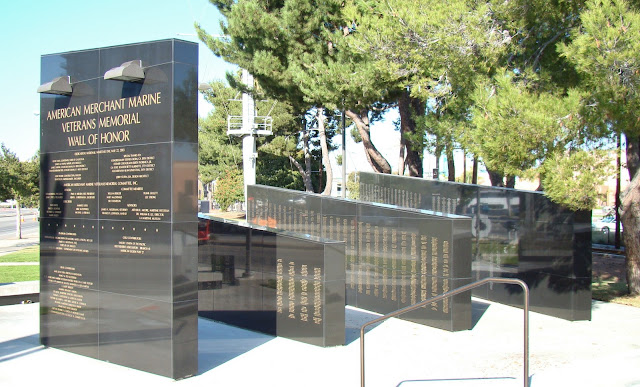 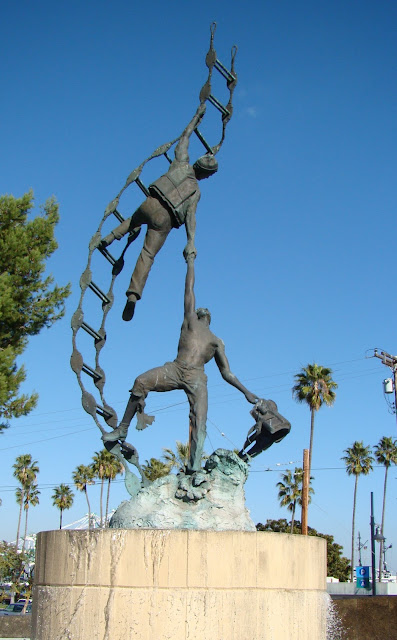 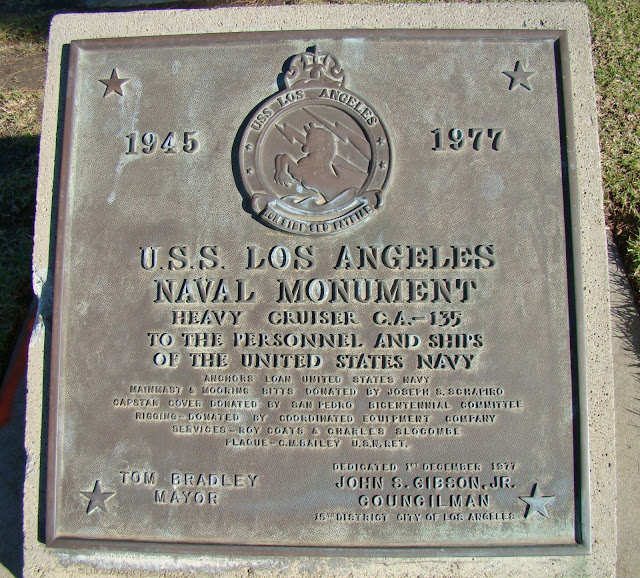 I stopped at Grinder’s a few blocks away (sort of like a Denny's) for a sandwich.  And then on my way back to the hotel, I stopped at The Green Onion for a carry out burrito for dinner.  It was the hike back ‘uphill’ that got me. 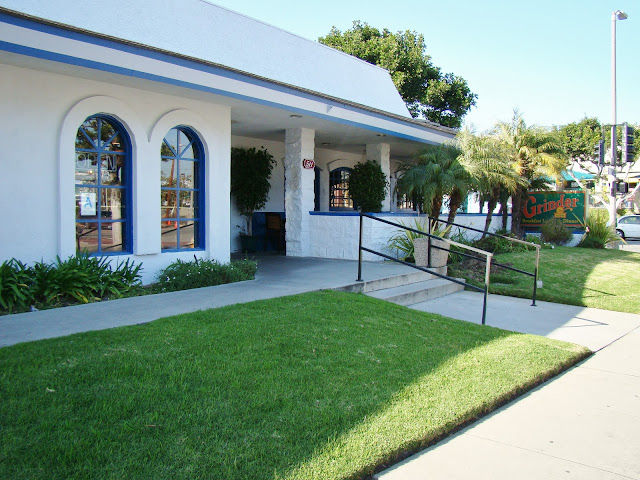 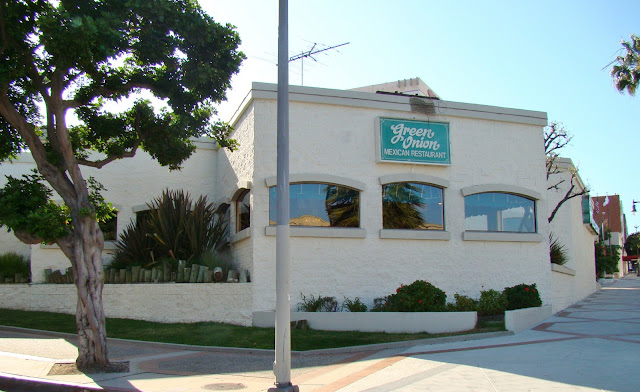 By this time, the wind felt quite chilly.  I came to the room; & got under the covers to warm up.  I tried to take a nap; but I hadn’t been on the internet in nearly 24 hrs.  I needed a fix.  Especially land based internet; which for $10 a day is relatively cheap & lightning fast compared to what I’ll be using the next 8 weeks onboard Serenity.

So, here I sit at 9:30 pm (PST), barely able to keep my eyes open.  My friend, Sandra in TN, has a saying…..”only one more ‘sleep’ until vacation”.  One more sleep; & I’ll be back onboard my beloved Crystal Serenity.  My mind will once again be at PEACE!!!

Loving it already and you aren't even onboard yet!!! Hope you manage to get some sleep before your big day tomorrow...Bon Voyage and Safe Travels...xx

Bon Voyage! GREAT aerial shots!!! Love your blog and really looking forward to following your trip--especially SIN-HKG. I was originally booked on that segment but opted to do it more economically in 2013 so I could also do Angkor Wat (and hopefully Antarctica Holiday and perhaps the B2B that includes Easter Island).

Hey Becky - So pumped about your trip, waiting for you to board, unpack, get computer set up and tell us everything!!! Sorry you were sick but maybe better before the cruise than during as last year.
Loved the picture of your planes shadow approaching L.A....to me a LOL moment. And...what ARE those circles?? We have seen them when flying to Las Vegas or Phoenix.
Have a safe and fun trip, I will be with you every inch of the way.

Wow, what great narration! I feel like I'm in our pocket! Does air really come out of your tear ducts? Lindsay

Em: This was the 1st time I've seen a picture of my Phoenix house taken from 33k feet. Thanks. HOWEVER! Let's hope that Sherriff Joe (Arpaio) doesn't find out that you also took a picture of Area 51! You'll do 3 to 5 in tent city wearing pink boxers!!!!!

Dave,I'm getting too old to wear pink. Do you think I can get them in purple???

Sitting in Dburg freezing our buns off! Great blog! the food is making us hungry! Guess we will settle for Taco soup!Have a wonderful time!