January 22nd
Nothing but deep blue water, no land in sight………yet! 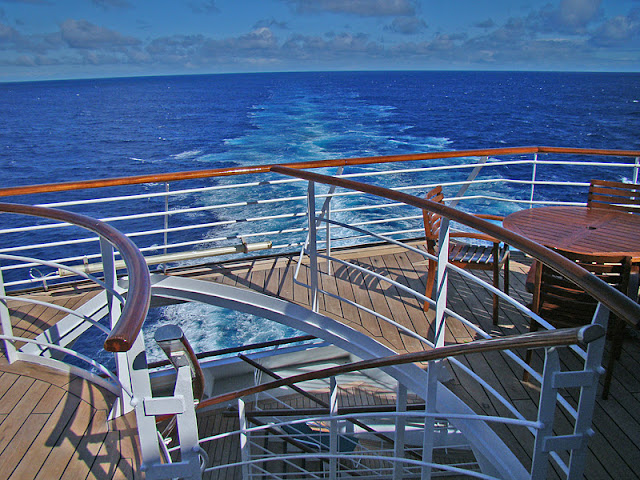 Well, so much for the sleeping in the starboard/port position.  That didn’t work well either.  Maybe the antibiotics that I’m still taking are impacting my sleep.  I’m no worse for the wear.  But I will use lack of sleep as the excuse for my mental deficiencies in the bridge class this morning.


I was awake at 7.  My first thought was that Keith (my Cruise Critic friend who is also onboard), has already been up several hours; finished his workout, probably done some laundry & will soon be having breakfast!  Some people I’ll just never understand.  One positive thing about being awake this early is that for the first time I got to watch the “Morning Show” live.  Every morning at 8 am, the Cruise Director & the W.C. Hostess do a live TV show.  They talk about such things as how the shows were last night, what’ll be happening today, show video highlights of the onboard happenings yesterday, have contests & call-ins.


The contests vary from day to day; & there were 3 today.  Fortunately, I was able to identify a slowly unscrambling  photo from a TV show.  ‘Dukes of Hazzard’, my TN friends should be proud.  (Where else would a photo of an orange car with the number 01 on it come from?)  I miss guessed the last one, which was a scrambled photo of Barbara Stanwyck.  I thought it was June Allyson.  Not that they look anything alike; but when they start out highly pixelated, it could have been a horse for all I knew!  I claimed my prize this afternoon in the library.......a lovely wood pen set (better than another baseball cap).


In Capt. Glenn’s report this morning, he advised that it would be mostly sunny today. There were swells of 6-7’, so they closed the pool for a while so that no one would be tossed around in the sloshing. They were open again & very busy this afternoon. We’ve cut our speed back to 18.2 knots. Out nearest point of land at 9 am was Oahu, HI (490 land miles). His quote for the day: “Everything that is difficult, is possible. Everything that is impossible, is just a challenge.”


Before bridge class, I ran down to the Reception desk to get another key card since I accidentally de-magnetized mine yesterday; & couldn’t get back into my cabin.  I talked briefly with Keith, Anne Marie & Capt. Glenn.  I got my capp & grabbed a bagel with cream cheese to eat on the way upstairs.  Bridge class is getting more serious now.  And I admit to getting lost today (but I wasn’t alone).  I need to study tonight so that I won’t be hopelessly lost from this point on.


Football playoffs were a hot topic onboard today.  The ship’s satellite was able to ‘capture’ both games (at great expense); they were being broadcast on large screens in several public areas on the ship (starting at 10 am), along with hot dogs & popcorn.  They were going to record it so it could be shown again tonight in our cabins. 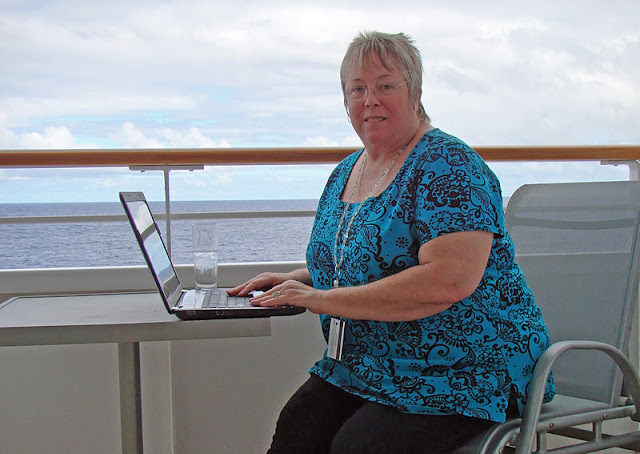 After bridge class, I went back to the cabin to upload the blog.  Internet was very cooperative today.  About 1 pm, I went up to the Lido buffet for lunch.  I filled my plate with little samplings of many things that tickled my fancy.  I had a half grilled ham & mozzarella sandwich on Italian bread with caramelized red onions.  It was to die for!  Had a small portion of the freshly made farfalle pasta with tomato sauce, Italian sausage & ricotta (very good).  The Szechuan eggplant & shrimp stir fry over rice was very tasty; but could have been a little spicier.  Also thrown into the mix was some baby shrimp cocktail & cute little ham cornets that were stuffed with herbed cream cheese (delish).  Ed  scurried around; & found one of those elusive Dr. Pepper’s.   It wasn’t very busy, so I had a chance to chat with Libert, Demi, Max & Ed. 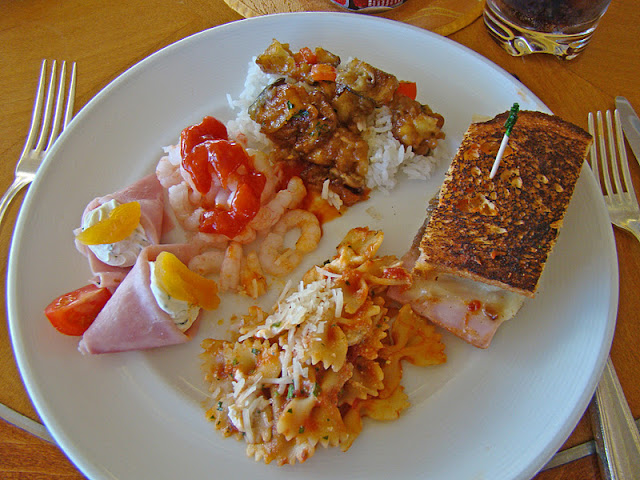 Since I can’t pass up anything caramel, I had one of the caramel cheesecake tartlets & some fruit & cheese.  The cheesecake was awesome. 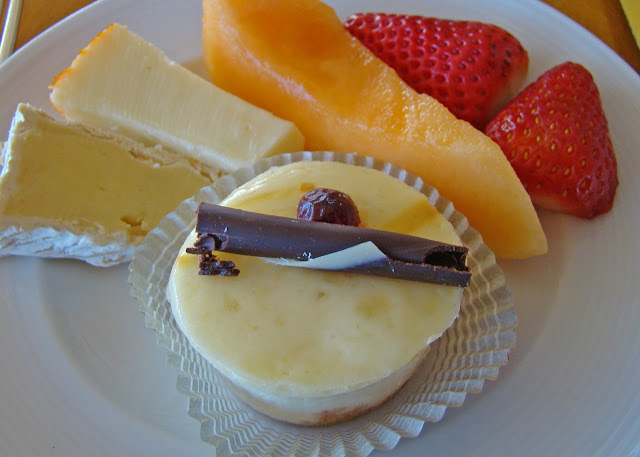 It’s finally warmed enough so that everyone seemed to be outside today.  I took a few shots of the sunny blue skies & deep blue ocean for all y’all who are either freezing your butts off or picking up after storm damage.  Hope everyone is staying safe. 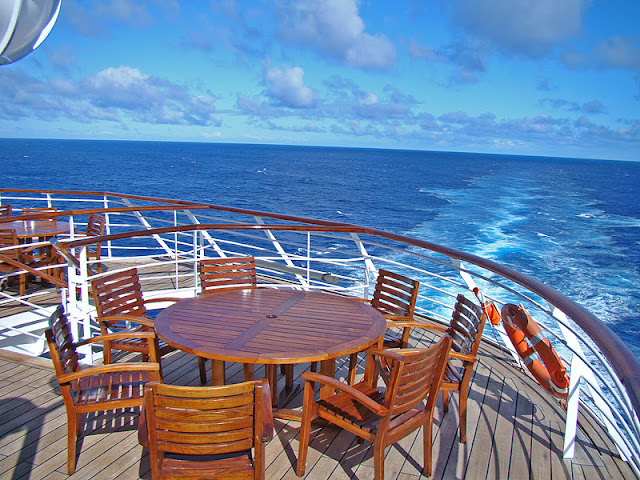 About this time each day the hip & knee start aching, so I headed back to the cabin to lay down & watch the Ocean Views panel discussion that I had to miss this morning.  This was the first time Crystal has given the audience electronic devices to provide feedback as the celebrity panel discussed world affairs before a live audience.  The panel consisted of Wendy Chamberlin (who represented the foreign affairs/Middle East point of view); Rob Warne (the economic perspective); & Pat Brady (giving the military point of view).  Dr. Harm de Blij acted as moderator.  Discussions ranged from the upcoming election, global economy, trouble with the E.U., how long we will have to wait for our own economic recovery, trade with China, & current military strategy.  This event seemed to please the very large group in attendance; & may become a more permanent feature on certain future voyages. 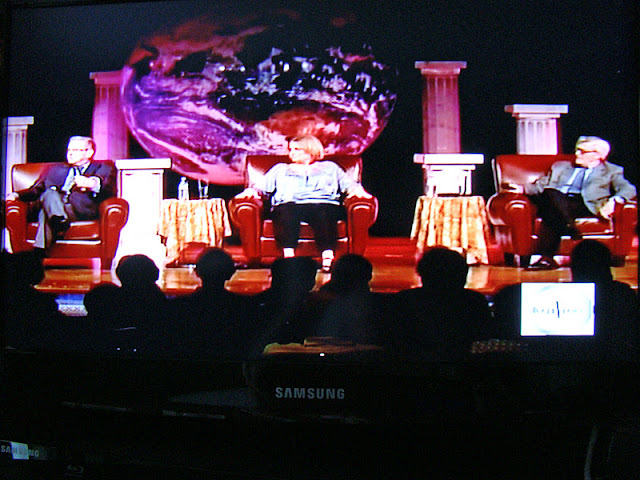 I did some reading & probably dozed off a time or two.  I set the alarm for 5, just in case.  I had been invited out for dinner.  Yes, I said OUT.  My travel agent’s consortium has a host couple onboard the full WC who try to socialize with all passengers that were booked through their franchise agencies.  They had invited another couple, a single gentleman & myself for dinner in the main D.R. at 6:15; an international mix, if you will.  The dress code for tonight was informal (meaning semi-formal by Crystal’s terminology); which meant a little more preparation time was needed before stepping out for the evening.  The Maître ‘d had a look of shock on his face when I walked into the D.R. It only took me 4 days to come out of seclusion. 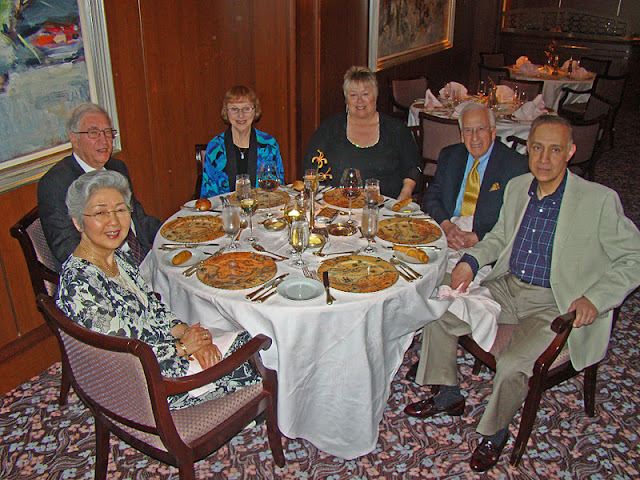 Our hosts, Stewart & Sharna Blumenfeld are a charming couple who shared great stories of their family, travels & tales of living in various part of the world (most notably in Guyana).  The other couple, Nick & Kazuko currently call Las Vegas home, although they have lived in various part of the world as well.  Nick is German & Kazuko is Japanese.  We enjoyed a very inspiring conversation about Buddhism (very apropos considering how prevalent this religion is in the parts of the world we will be visiting).  They are just an adorable couple.   The other dinner companion was Jamshed, who hails from Cupertino, CA.  He works for Oracle; & we chatted a good bit about Larry Ellison bringing the American's cup back to the U.S. & the technology industry. The meal & the company were excellent tonight.  I started off with an appetizer of veal Carpaccio with tiny cubes of apple & feta cheese drizzled with white truffle honey.  Subtle in flavor, but a nice blend of tastes. 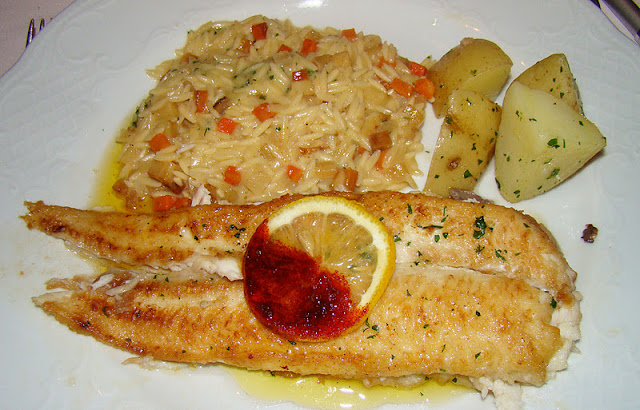 I wanted a more simple salad than what was offered on the menu; so I asked if I could have bibb lettuce with tomatoes.  Absolutely, with their delicious bleu cheese dressing.  I had come into the D.R. expecting to have the prime rib; but I was persuaded by the waiter’s recommendation of the Dover sole.  It turned out to be an excellent choice, not just because it was pan fried in butter.  It was extremely fresh, delicately mild in flavor & cooked to perfection.  It came with new potatoes; but I substituted the other veggie with the roasted vegetable orzo.  I LOVE this orzo recipe.  The entire main course was a huge hit with me. 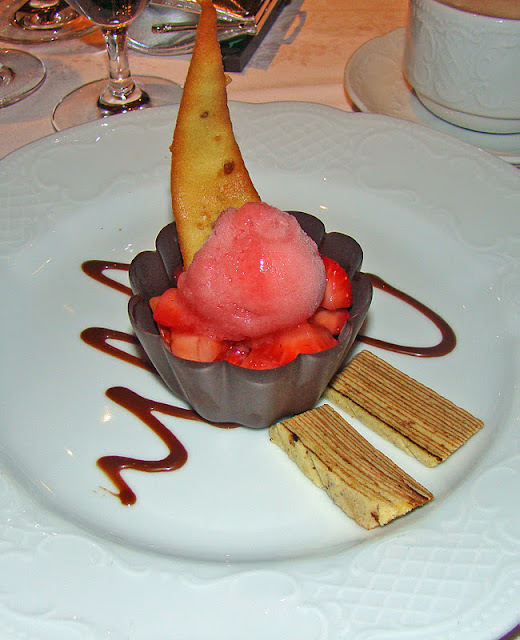 I was also tempted by the bananas foster that was being prepared tableside, but I took a chance on an interesting sounding dessert called ‘strawberry garden’.  A tulip-shaped ‘cup’ made out of chocolate was filled with marinated strawberries & topped with a tiny scoop of strawberry Bellini sherbet.  Along with some decaf cappuccino, it was the perfect ending to a superb meal.  This evening was definitely worth getting gussied up & stepping out for. 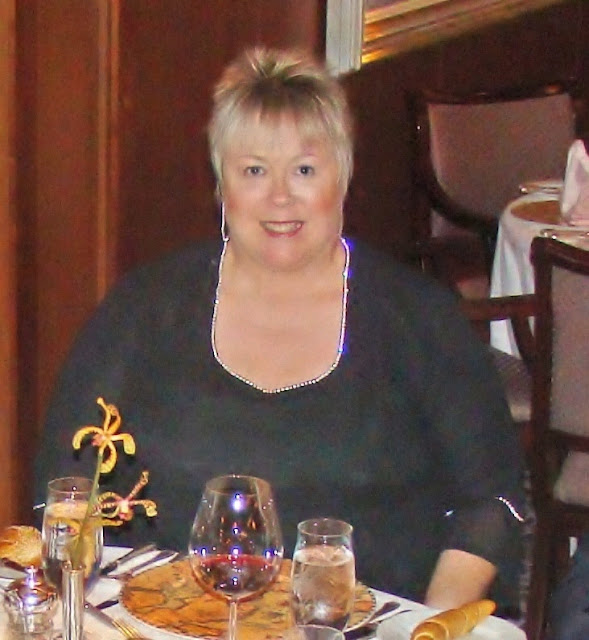 Just as I’d done when I headed toward the D.R., I made the walk home in bare feet.  Nobody seemed to pay any attention to the fact that I was carrying my shoes.  With the hip & knee acting up, I wasn’t about to make a miss-step in public wearing semi-formal attire.  How embarrassing would that be on my first night out???

I’m going to try to stay awake to finishing typing & editing the photos for the blog.  And if the internet is halfway decent tonight, I may even get it uploaded.  I’ve gotten days behind with the blog on past trips; & it’s very hard playing catch up.  Hopefully, sweet dreams & deep REM sleep will follow…….please!

Like the new hairdo, and glad you got your balloon drop that first night.

You're killing me with the food--started Weight Watchers on Jan. 2.

Ditto (drtee) on the food ... I started Nutrisystem again on Dec. 21st. I want 2 of everything you are eating.

drtee, who says 60 can't do punk? Good for you going back to WW. Looking at all these photos of myself is rather disgusting; but I'm not gonna stress about this now.

Been thinking about you today, after last night's dinner conversation. So, this morning I started reading the first of a series of 3 books entitled 'Modern Buddhism'. Hopefully, something will rub off. Wish you were here to guide me, oh wise one!

Sandra, I'm proud of you for recommitting. Something's gotta give when I get back home. I'm being adventurous; but not going hog wild. Eight weeks is a long time to (try to) be good. Hang in there, girl!