After 5 relaxing sea days, this afternoon we reached our first port of call, Honolulu, HI.  You could see the anticipation & excitement on everyone’s face.  And with the Serenity making her approach from the eastern side of Oahu rounding Diamond Head, the vista looking down Waikiki Beach was spectacular in the late afternoon sun.  But there was nearly a full sea day of activities that kept everyone busy….
I barely got 5 hrs of sleep; had crazy dreams.  Who knows where this stuff comes from?  I was awake before 7:30; & was actually waiting for the morning show to start at 8.  I’ve been enjoying the easy banter between Rick & Elise (a la Regis & Kelly).  They do interviews with some of the celebrity guests & show fun video clips of all the things that go on around the ship the day before.  (FYI, in addition to still photos, there is a videographer who's taping the passengers going about their daily activities, going ashore, etc.  They put all this on a WC DVD.)

Rather than study this morning, I decided to get out the Kindle & start a book.  And after last night’s dinner conversation with Kazuko, I decided to start book one of a series of three entitled “Modern Buddhism”.  I could certainly use some spiritual enlightenment.  Maybe I can find a way to further un-clutter my mind; & as a result, find a restful night’s sleep. 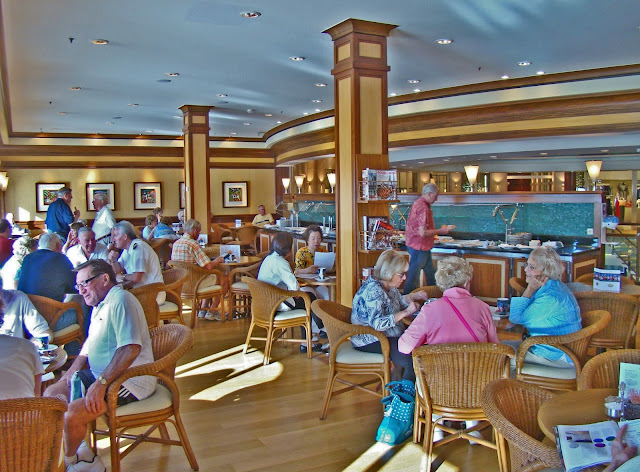 I was out the door at 8:45; and found myself waiting with quite a few others for the Bistro to open at 9.  (Waiting for something/some place to open is a totally new concept for me.)  I had some fruit, cheese, cold cuts & a pastry with my capp.  Capt. Glenn reported at 9 am that we were 48 land miles from the island of Molokai.  We’ve slowed down to 19 knots (22 mph) since we’re a little ahead of schedule.  He told us to be on the lookout for Molokai on our port side.  And soon afterwards, we would see the island of Oahu coming up just off our starboard bow.  He predicted a partly cloudy day with high temps in the upper 70’s.  The quote for today…..”If you don’t know where you’re going, you’ll end up somewhere else.” 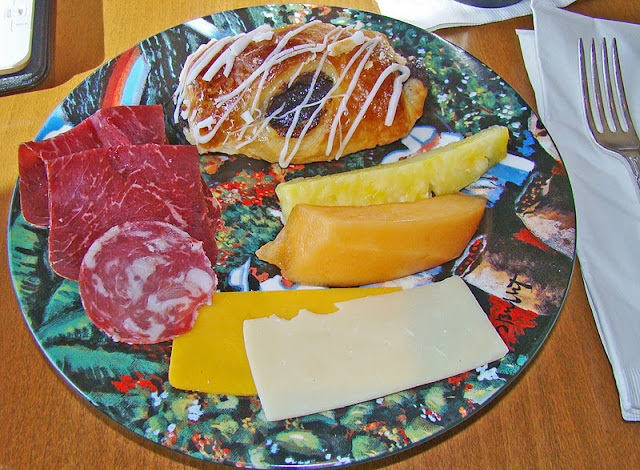 In bridge class today we played hands of ‘mini’ bridge; but we’re now adding in honor points, bonus points in anticipation of the big lesson on the subject of ‘bidding’ on our next sea day.  Just like yesterday, I left there in a state of confusion.  I would be perfectly happy to find someone who’s willing to just play hands for the purpose of winning tricks; forget the bragging rights of having 3,000 points!  As class ended, we were all saying a ‘short’ goodbye to our bridge partner, Louise.  As I mentioned before, she lives in Honolulu; & was going home to see her cats & pick up more luggage.  But what I didn’t realize, she was going to actually spend the night at her home & return to the ship tomorrow.  How strange that must feel? 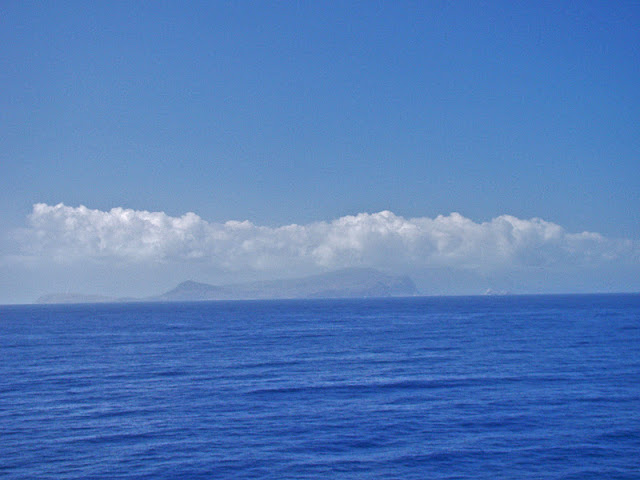 To kill time before lunch, I decided to go up to the Palm Court to be one of the first to sight land (ho).  I was surprised that absolutely nobody was up there but the bar staff.  By 11:15, Molokai was to our left; 90 mins. later, the much larger Oahu became visible.  There was some haze; so the photos aren’t perfectly clear.  If I had had a few more Photoshop lessons under my belt, I probably would know how to fix that. 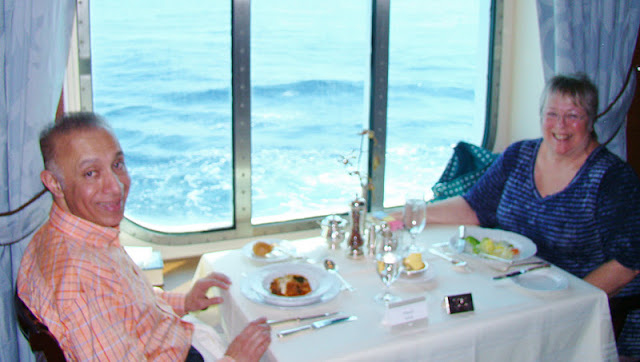 A few other passengers began to file in for the team trivia game at noon.  And about the same time, up walks Jamshed (table companion from last night).  He sat; & we talked for a good while.  I was contemplating eating lunch at the Lido buffet; but he talked me into going to the D.R. instead.  We had a nice window table, enjoyed a great meal & some more thought provoking conversation.  I was facing the back of the room; & I noticed the waiter kept looking over at us.  Then I realized it was kind of quiet in the D.R.  I asked Jamshed, ‘is anybody else in here besides us’.  ‘No’.  I felt so sorry for the waiters.  It was way after 2 o’clock when we left there. 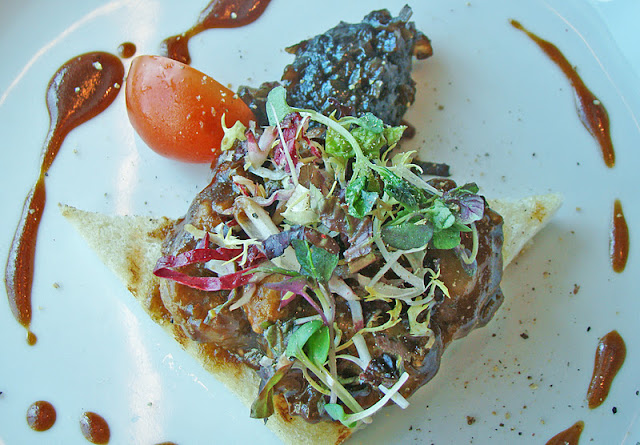 Oh, BTW, lunch was very good today.  He ordered an interesting looking appetizer, which I thought was worthy of a photo.  It was Madeira wine glazed chicken liver on toast points garnished with balsamic onion marmalade.


I started with a Boston lettuce salad with tomatoes, grapes & crumbled bleu cheese.  Followed by, another delicious soup…….cream of cauliflower with pumpernickel croutons.


We both had the grilled hot pastrami sandwich on rye, which came with French fries & coleslaw.  The sandwich was piled high with tender, juicy meat; excellent! 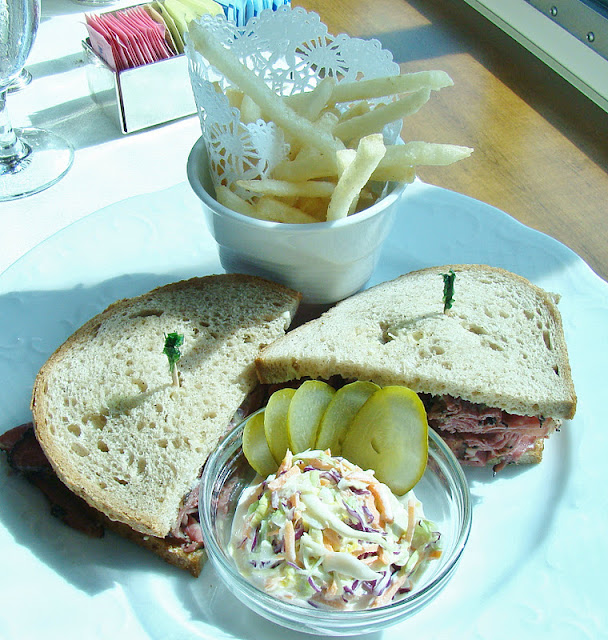 As we were leaving the D.R. you could see we were approaching Diamond Head.  We obviously were arriving earlier than the expected 4 pm.  We parted ways there.  I was lucky that my cabin’s verandah was on the ‘good’ side of the ship for the sail in.  I shot most of my photos from there. 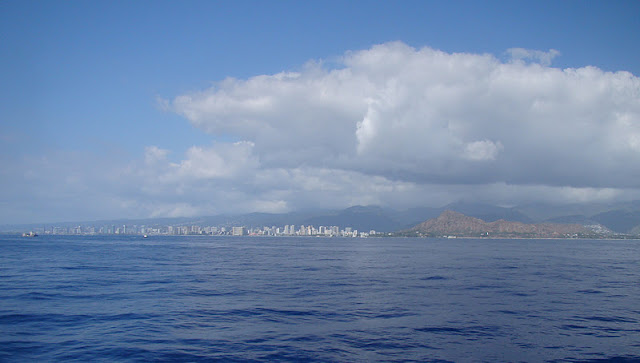 I was a little surprised when we actually docked at Pier 2 at the big terminal.  In the past, when I’ve sailed in & out of Honolulu, my ships were always docked right at the base of the Aloha Tower.  You could easily walk on & off with shopping & dining right there at your feet. 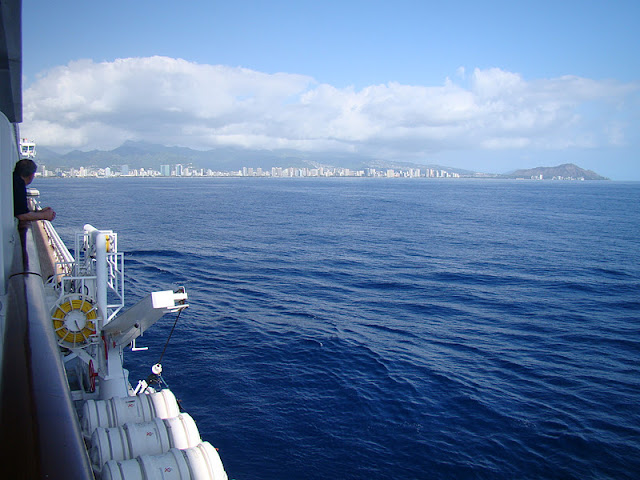 Since we will be at the big pier, Crystal is providing a shuttle every 30 mins. between the ship & the Ala Moana shopping center.  It’s a fairly good jumping off spot for those who want to sightsee on their own.  And I expect tomorrow that I’ll go over there just to pick up a free w-ifi signal. 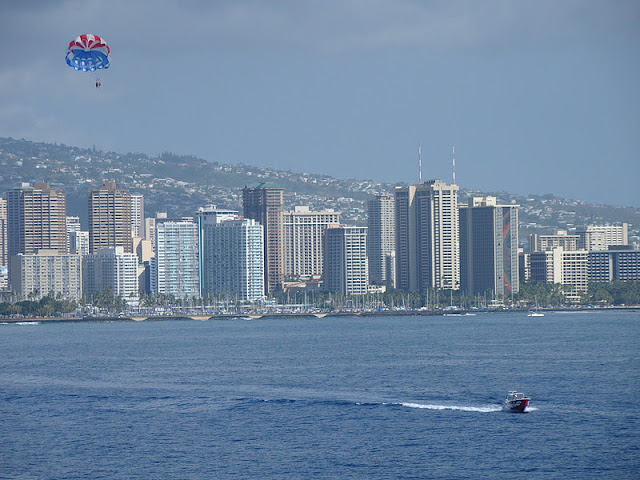 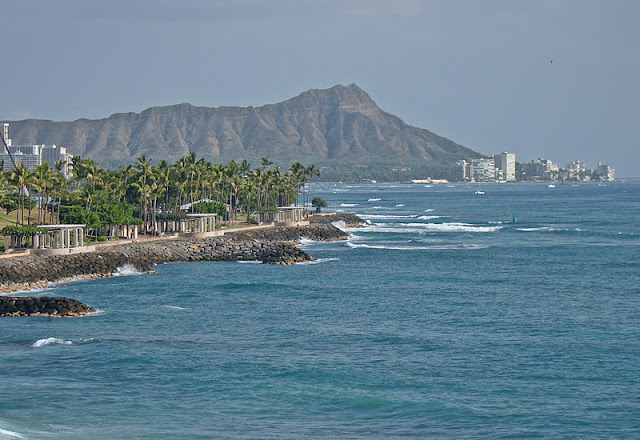 I never got around to a nap today.  I did watch 2 lectures replayed on TV that I was unable to attend in person.  Rob Warne’s talk this morning was on the strategy & logistics of the capture of bin Laden.  He did divulge a few tidbits about their ‘intel’ that was not reported at the time on our newscasts. 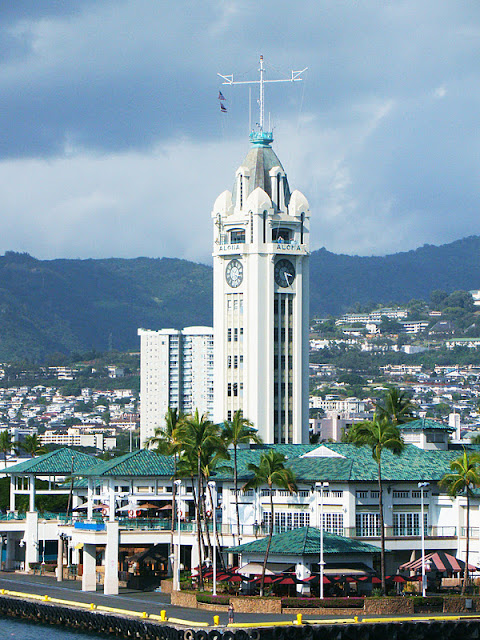 The second talk I watched was by ‘character’ actor, Bruce McGill.  And you may be wondering, who’s that?  I was not aware that he was going to be one of our celebrity lecturers.  A few days ago I spotted this man out on the pool deck; & the next day in the Lido buffet line.  Both times, I thought there was something familiar about him; but I wasn’t sure what it was.  And he mentioned just that, at the beginning of his talk today.  People know his face & his work; but nobody knows what his real name is.  I first knew him as Capt, Jack on the TV series, MacGyver.  Recently he plays a cop that works with Rizzoli (& Isles).  He’s done WELL over 100 movies, plays & TV series.  Today’s presentation was mostly slides, clips & anecdotes from his 45 year career.  He will speak again later in the cruise. 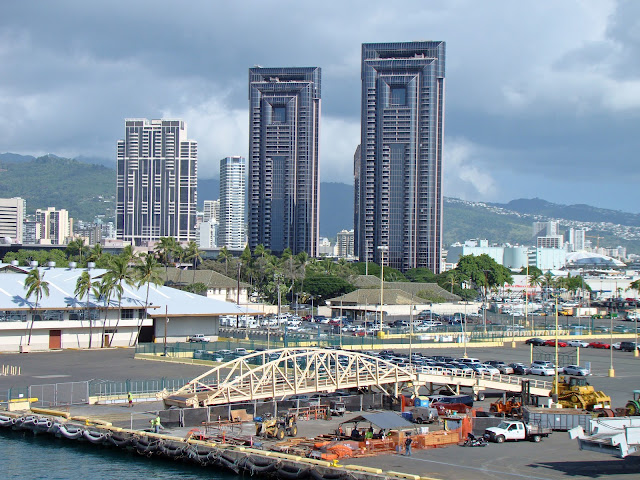 I ordered dinner a little earlier tonight.  While I waited for Liz to bring it, I stepped out on our little ‘private’ aft deck to take some night shots of the city lights.  One thing will be most notably different about tonight……..the sounds of sirens, as the stern of the ship backs right up to a major highway.  I may have to turn the volume up on my sound machine tonight. 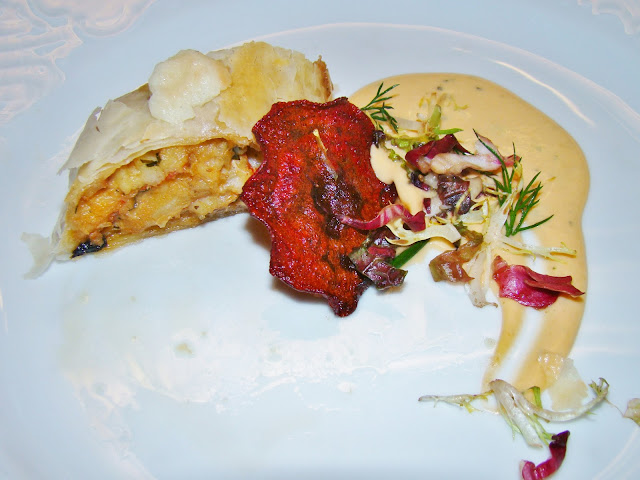 Liz returned about 7:30 with dinner.  It was another outstanding meal that was delivered hot & as beautifully plated as it would be in the Crystal Dining Room.  For my appetizer, I had a slice of lobster strudel, with something called a sauce choron.  Don’t know what it’s supposed to be; but it was pink, ‘fishy’ (in a very good way) & had a little kick to it. 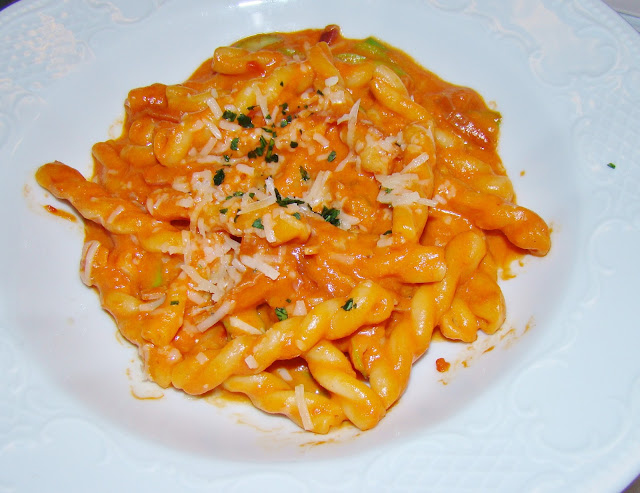 I got an appetizer portion of the pasta special because it just sounded so good.  It was gemelli pasta with tomato sauce, cream, asparagus, prosciutto & parmesan cheese.  It was….. the “O” word! 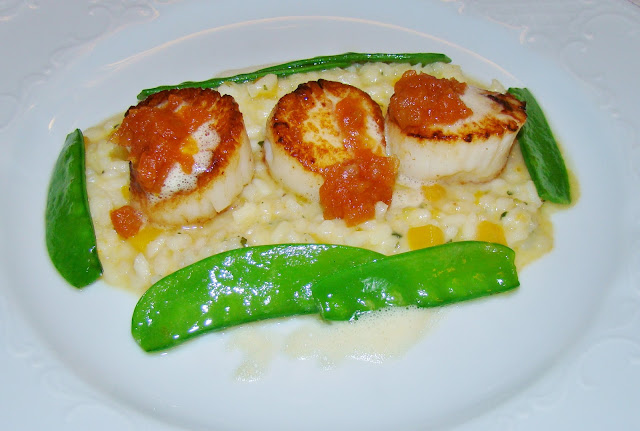 For my main course, I had the pan seared scallops on a bed of butternut squash risotto.  The large, succulently tender & perfectly cooked scallops were topped with a dollop of chili-tomato marmalade.  Snow peas were laid end to end to form a ‘frame’ around the bed of risotto.  It was almost too pretty to eat.  And it tasted every bit as good as it looked. 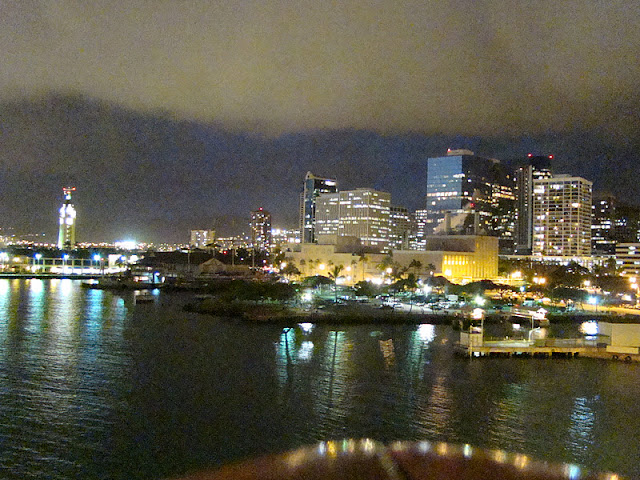 The good thing is, I won’t need to set an alarm for in the morning.  No classes; just get up & get on the shuttle to the shopping center when I feel like it.  But the bad thing is, there will be no vibration, pitching or rolling to help lull me to sleep.  Not that any of the afore mentioned things have helped the cause thus far.  A few more chapters of ‘Modern Buddhism’ & maybe things will be different.  I’ll let ya know how that works out for me tomorrow……………..

Hi Becky. I am really enjoying your blog. Your funny comments about receiving the hat cracked me up. A few years ago I also did a few segments at the beginning of the world cruise. All the world cruisers were given black hats and black jackets. Those of us who were doing segments received only a green hat. From then on it was obvious who was who and we started referring to people as "black hats" or "green hats". Love your photos too. Did not know that Clarke and Jackie were a couple.

I should clarify what I do know about 'our couple'. Eighteen months ago, I saw the both of them in the CU late one night skyping with 'their daughter'. I had no idea at the time.

Fast forward to a week ago, I asked Jackie how the little girls was. She said 'great, she's 3 now'. She's been so busy the past week, that I haven't had a chance to talk to her again. And since Clarke doesn't join the ship until Singapore, I have no idea what the status is now. I hope to get to talk with her more & see updated pictures. She was a beautiful baby girl at the time.

Becky, My favorite book on Buddhism for the novice is The Accidental Buddhist by Dinty Moore (and yes, that's his real name). He goes to three different types of Buddhist retreats. It's informative and amusing at the same time. You might download it on your Kindle.

Hi Becky: Thanks for the clarification on "our couple". I have so enjoyed reading your blog that I went back and read all your previous blogs from your previous cruises. So much fun to see photos of all the Lido guys! And, although I love seeing Keith's food photos, your food photos appeal to me so much more since I LOVE the Bistro (those tarts!) and all the desserts. Seriously, who counts calories on a cruise? Have some wonderful days at sea. By the way, you looked SO pretty in the dining room!