January 27th
Somewhere in the middle of the Pacific

I enjoyed another wonderful night’s sleep.  Thank you to which ever divine influence allowed that to happen.  The restful sleep & finally being off all those antibiotics have made all the difference in the world.  I’m enjoying getting out &  chatting with friends, both old & new.  I continue to run into more familiar crewmembers that bring smiles & revive good memories of cruises past.

You hear this said all the time on Cruise Critic & in the various blogs I follow, THESE PEOPLE ARE CRYSTAL.  Sure, the surroundings are fabulous & the food is outstanding.  But the heart & soul of Crystal is their staff.  Every time I return & see crewmembers that have gradually worked their way through several different departments as they move ‘up the ladder’, I feel so proud for them.  Their hard work & devotion to the company is greatly rewarded.  They promote from within if at all possible; & rarely does a crewmember choose to leave the company until they decide to retire from ship life altogether.  This speaks volumes in the area of customer service.  Other companies should take note; & try to follow these same principles.  You are only as good as your weakest link!

I was awake about 7:45; & made a list of a few things I wanted to attend to today.  After watching the morning show, I went up to the Bistro for breakfast.  I stuck with the usual; except this morning prosciutto was on the buffet.  I do love prosciutto; & this was extremely sweet & not too salty (which is hard to find in the U.S.)  Capt. Glenn’s report from the bridge stated that we had traveled 951 (land) miles since leaving Lahaina day before yesterday.  He says we’ll be crossing the equator sometimes tomorrow evening (which is celebrated with great fanfare at sea).  Today’s weather is looking great, 80 degrees, calmer seas.  He says now that we’ve “got a little in the pocket”, he’s going to slow our speed down a tad.  His thought for today…..”The past is knowledge; today is an opportunity; & the future is possibilities.”

When I left the Bistro, I ran into Bruce McGill & his lovely wife by the elevator.  I just had to introduce myself & tell him that I was one of the guilty ones……someone who had spotted him on day one; knew he looked familiar for some reason; but didn’t know why.  I told him that if I had heard him speak, I would have recognized the voice & put it with a name right away.  He got a laugh out of that.  We talked about the upcoming season of Rizzoli & Isles, which he will begin filming after he disembarks.  He’s very excited about the emphasis that was put on his character toward the end of this current season; & that this will allow him to ‘stretch’ himself a bit when the new season returns during the summer.  I was really tempted; but opted not to ask him to pose for a photo.  It was pleasure enough just to speak to him; & commend him for always finding work during his long standing career.  Lots of bigger stars will admit that’s not an easy thing to do.

I then went up to the Computer University to inquire about photoshop classes during the next segment.  They will indeed conduct the same schedule of classes; so I chose to drop out of the current class & enroll in the next series.  I shouldn’t have tried to do both during this voyage.  I will benefit more from sticking with the bridge for now.  Then it was on to bridge class, where Eddie taught by himself today.  After rehashing what we learned yesterday, we played a few hands of mini-bridge so that we could learn the consequences of leading off with the right & the wrong cards.  It made some sense of yesterday’s confusion; & taught us that the first card that’s laid on the table can determine the outcome of the whole game.  No pressure there??? 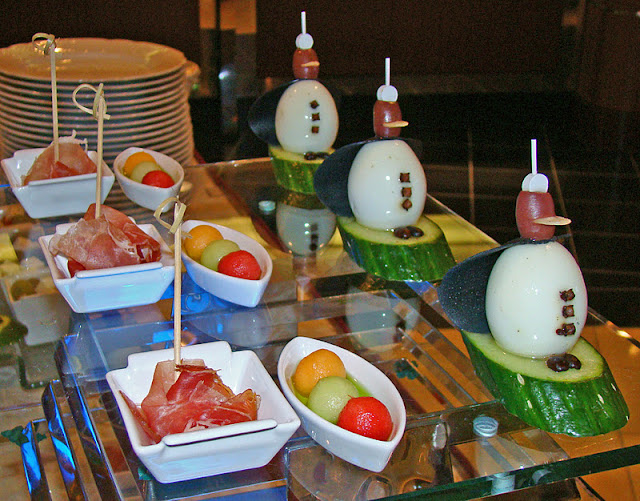 I next went down to see Paula Jean (the onboard sales consultant) to create an ‘open booking’ for a future cruise.  Doing so while still onboard, guarantees that I will get double the amount of past passenger discounts.  A simple $100 deposit; & I will be given 6 months in which to decide what my next voyage will be.  We chatted for a little while, as there was a flurry of activity going on in the Crystal Cove as they were setting up for the Gala Luncheon Buffet (which is held once during every voyage).  I NEVER get tired of viewing this spectacular display of culinary artwork.  No matter how many photos I’ve taken at various grand/gala buffets, you have to sit & marvel at the artistry each & every time.  Funny thing is, quite a few of these little ‘tricks’ require very little skill.  With some imagination, we could even garnish a simple plate of fruit & cheese like this at home. 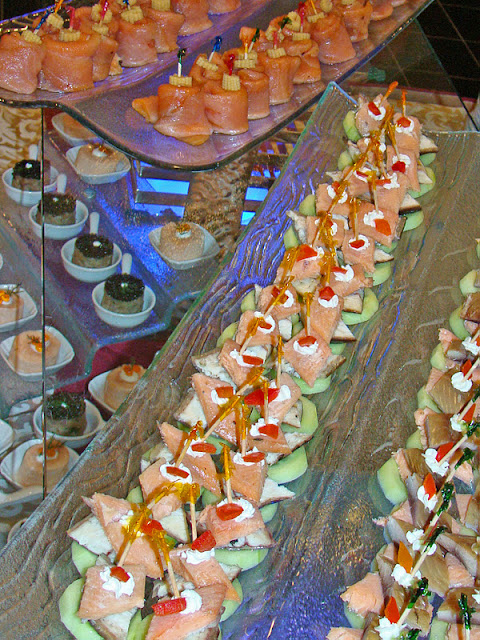 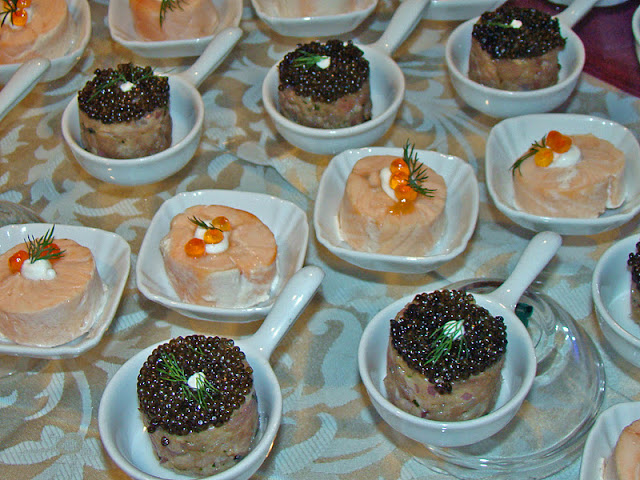 At 11:30 they open the buffet for photographs & to introduce the chefs that made this gastronomic extravaganza happen.  I noticed a LOT of new iPad owners trying out their camera feature at the buffet.  It must feel awkward holding this large tablet in front of your face & using it as a camera.  That would take some getting used to. 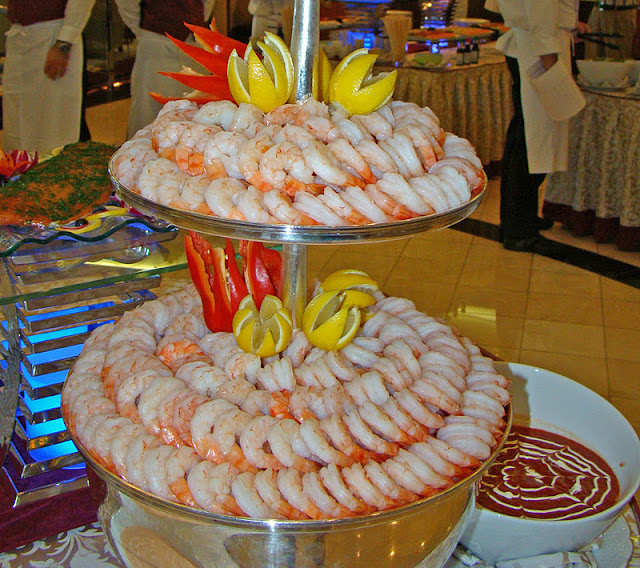 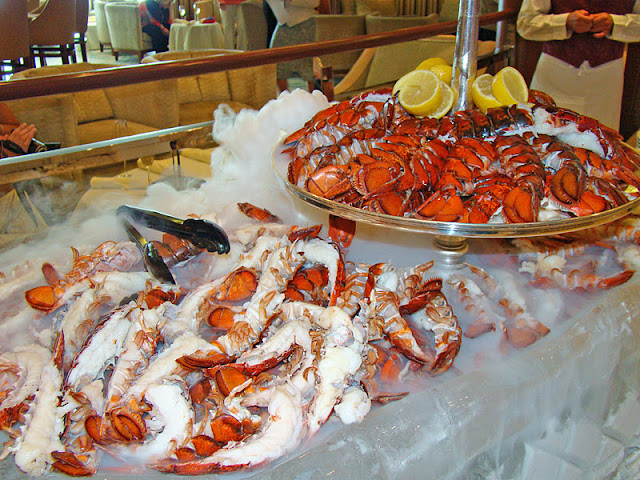 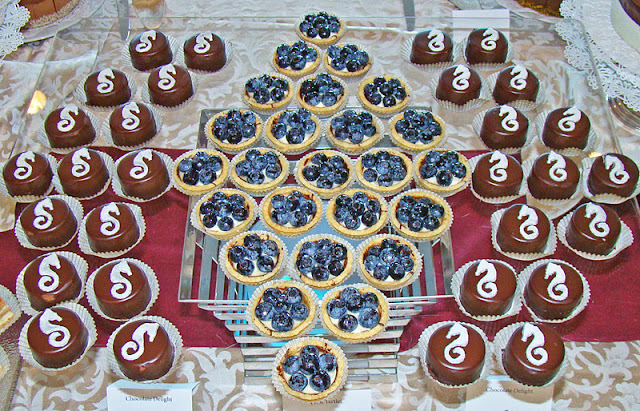 I had a chance to chat with Kamel (my Turkish waiter friend).  He was manning the dessert table, which didn’t require any work on his part.  He said he’s leaving the ship in Singapore; & going to Istanbul for a much deserved vacation.  I told him how envious I was that he was going to be back in my favorite city. 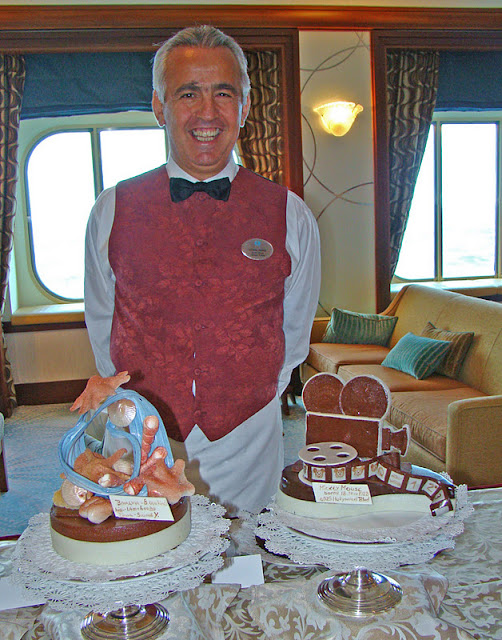 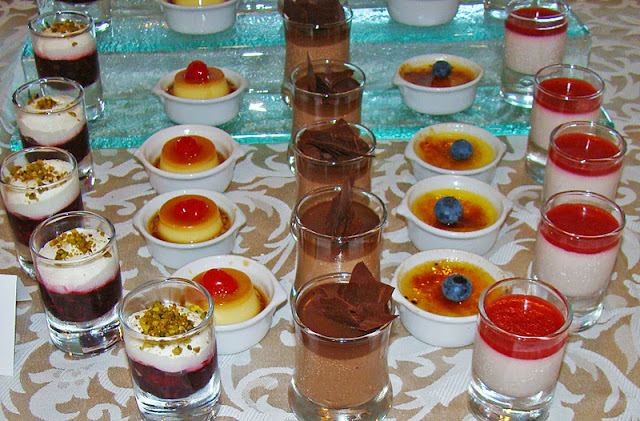 I gathered up a few of the ‘big ticket’ items & had a pre-lunch snack.  I couldn’t let those little lobster tails & all those jumbo prawns go to waste.  I tried the mini crab cake for the first time; & it was excellent.  The mini eggplant parmigiana was also very good.  And I had another bite of prosciutto.  And all the while, the stringed quartet played relaxing classical music while we grazed. 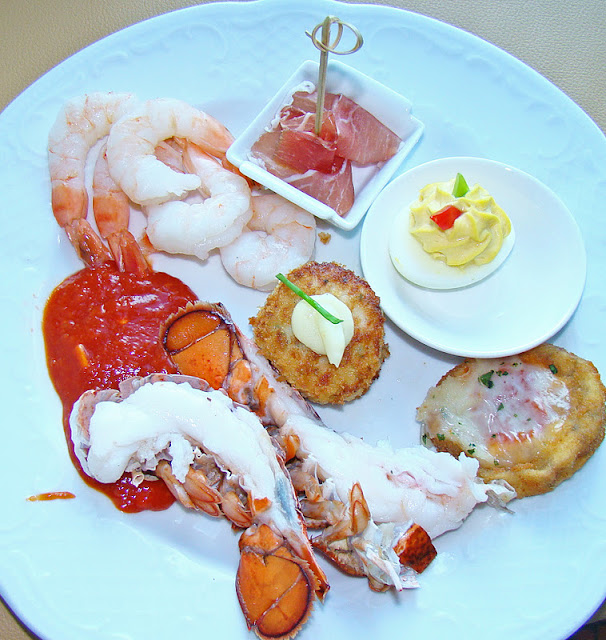 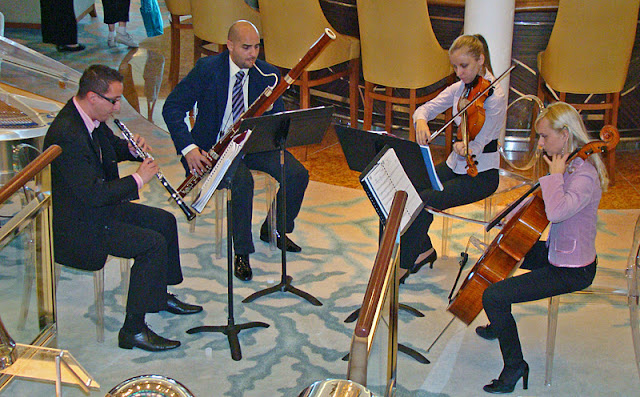 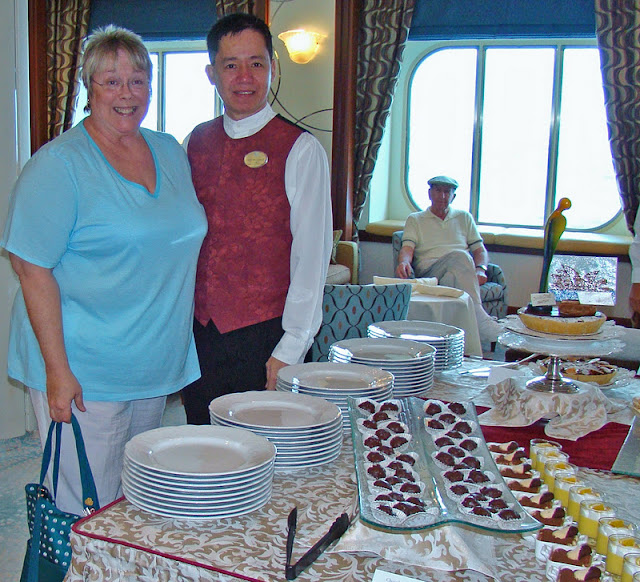 Then I trekked up to the salon to see if they had a stylist that was especially talented with razor cuts.  They introduced me to Rachael; & she made appointments to cut my hair in 2 weeks; & then again in 6 weeks.  Thought I’d go down to Tastes to see what might be on their dinner menu tonight (just in case the main D.R. menu turns out to be a bust).  Tastes is not open every evening; but it is an excellent option if you want to remain in ‘day clothes’ during your evening meal.  It was pretty quiet down there; so I decided to find a shady spot where I could catch a bit of a/c & read a while.  I read for a long time.  Pat (SnoBird Cruiser from C.C.) sat down & talked with me a while. 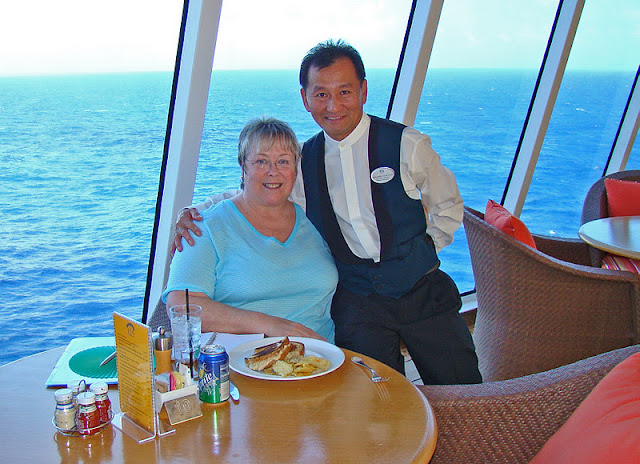 Benjamin, who usually moves at break neck speeds, was in ‘slo-mo’ today.  He actually had time to stand & talk a little while.  He’s expecting an email from his wife with their latest family photos.  He will print them out & share them with us.  Benjamin’s practically a staple around here; & his family is like part of our family.  I look forward to getting to ‘meet’ them.

I’ve been enjoying the mindless reading of the new book I started yesterday; so I found a cozy spot in our little secluded area aft on deck 8.  Throughout the late afternoon various people would venture out there to play shuffleboard.  I had no idea if it was ever used; but it obviously is.  As 4 sets of couples came & went, I noticed that all but one spoke with British accents.  Guess the average American has given up on this sport that used to rule during the days of grand ocean voyages.


As the sun got lower in the sky, I began to feel cool & crusty from the salt air.  But it was so beautiful out there; that I didn’t want to give it up.  I found a locker of clean pool towels; & wrapped up.  The ship has been rolling all day long; & it was almost hypnotic watching the railing raise & fall against the horizon.  I think I may have even dozed off a time or two.  Once the sun set around 7:15, it got pretty cool; so I came in.


Comparing the dinner menus between Tastes & the main dining room, I decided I’d go with the D.R.  Even though it’s a casual night, I didn’t want to shower & get redressed at 7:45.  So, I wrote up my dinner order & left it outside for Liz.  By the time I got out of the shower & all cozy in my PJ’s, Liz was knocking on the door.  (BTW, since I told her how the sound of the newly installed doorbell nearly makes me jump out of my skin, she knocks instead.  And she never forgets either.) 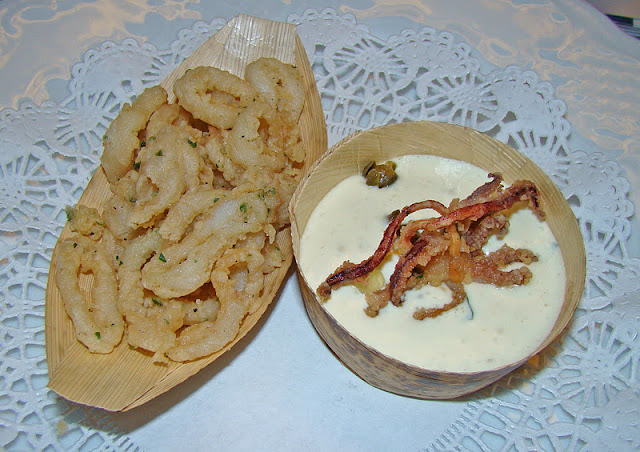 Tonight’s dinner more than made up for last night’s flop.  I started with an appetizer of fried calamari with a citrus caper remoulade dipping sauce. 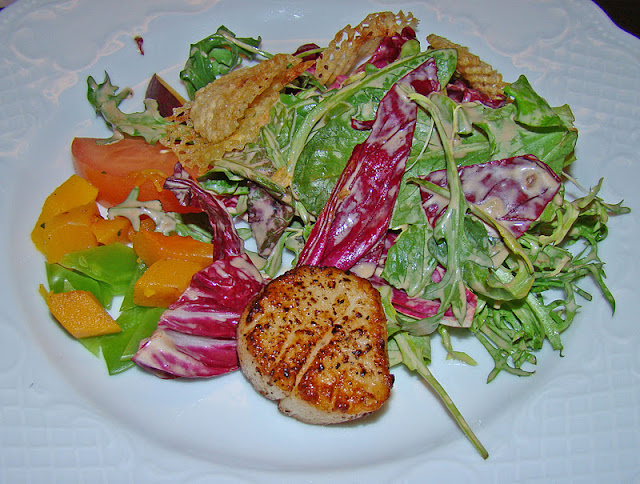 I asked for an appetizer portion of what was designated the salad entrée; a grilled scallop sitting on a bed of garden greens tossed with creamy Italian dressing.  It was garnished with cubes of roasted butternut squash, wedge of tomato, snow peas & crispy fried waffle cut potato wafers.  Excellent salad; I may try it again later in the cruise as an entrée. 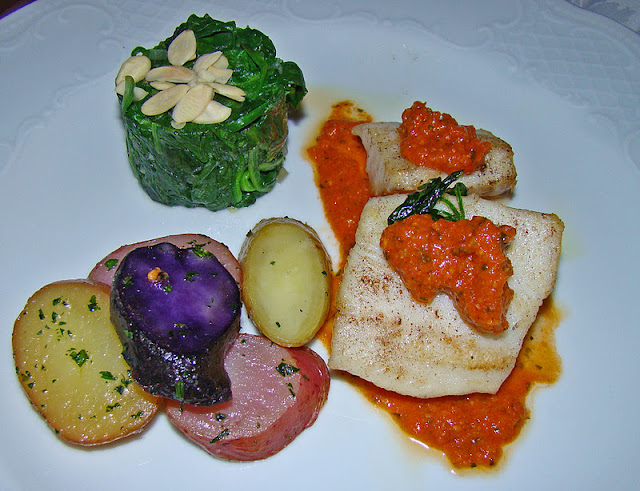 For my main course I had baked black bass which sat on a bed of tomato & almond pesto.  It came with sautéed spinach & heirloom potatoes (I didn’t know what those would be either; but they turned out to be roasted multicolored potatoes).  I’m truly amazed at how perfectly cooked all the fish courses have been; & especially how they can deliver it to the cabin still warm & succulent.  This was an outstanding meal.


During dinner I watched a replay of the lecture given today by Harm de Blij.  Today he gave his suggestions on how the U.S. should change foreign policy & reset our priorities on the domestic level during this time of (so called) ‘recession’.  I have found his talks to be very easy to follow; & I come away with a better understanding of news topics that would otherwise go right over my head.


After dinner, I started watching a movie on TV, “The Resident” with Hilary Swank & Jeffrey Dean Morgan.  I like them both; & little did I know it was going to turn into stuff that bad dreams are made of.  Let’s just say I no longer have a crush on Jeffrey Dean Morgan.

We are moving into another time zone; & therefore we’re turning our clocks back another hour tonight.  It’s nice to keep picking up a extra hours of sleep; but I still think I’m getting the raw end of the deal.  When we cross the International Date Line next Monday, I’m gonna end up losing a whole day!  That’s just not fair!!!


So, I’m going to try to stay awake long enough to read some of my romance novel; & hopefully put remnants of that scary movie out of my mind.  Signing off from somewhere way out yonder………..
Posted by Unknown at 10:03 PM

Enjoying your blog and photos so much! Love seeing the photos of Raymond and Benjamin too. It was interesting to see the Grand Gala buffet photos. For some reason on my last two cruises in August 2011 and November 2010 there was no GG buffet. I don't know why and I wish I had asked at the time instead of assuming they had stopped doing them. Have u ever heard anything about why some cruises have them and some don't?

Thanks for all the effort and sharing your adventure. I am enjoying following you and thinking about what's coming next. I love you, girl. Kathy Clements