Another blissful day at sea…….

I think I miss my bed at home.  Not that Crystal doesn’t have fabulous bedding; but I’m a bad sleeper anyway.  I think I’ve discovered during this afternoon’s nap, that this mattress is more comfy if I rotate myself 90 degrees.  That way you’re not lying in the same ‘channel’ as everyone else has.  At least that’s what I’m gonna try tonight.  I first woke about 8:30 when I could feel some pitching motion.  Imagine my surprise when I turned on the TV to the bridge camera to see the flattest, bluest sea.  And then I had to open the drapes to confirm this.  I suppose the 24 knot head wind produced that feeling. 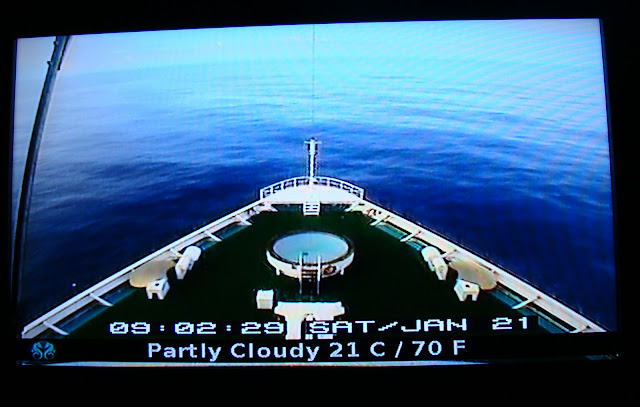 When Capt. Glenn came on the PA at 9 am, he noted that we were still maintaining around 20 knots on the 4 engines.  Temps are still in low 70’s with partly cloudy skies.  His quote for today…."Pretending takes practice; being you, comes natural.” 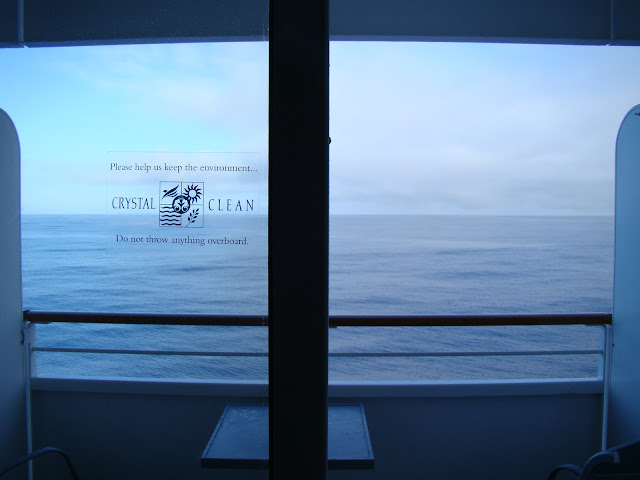 I ate last night’s chocolate dove cake for breakfast.  Then a quick stop for a capp; & then on to Silk Road Restaurant for the bridge class.  We picked up even more people today.  I stayed at the table with Kim, Elaine & Louise.  Today’s focus was identifying the honor sequence & deciding which card to lead with.  Also we’re beginning to figure out what cards our partner might have by how he/she responds to the first card played.  Yes……it’s starting to get deep.  But so far, I’m hangin’ in there. 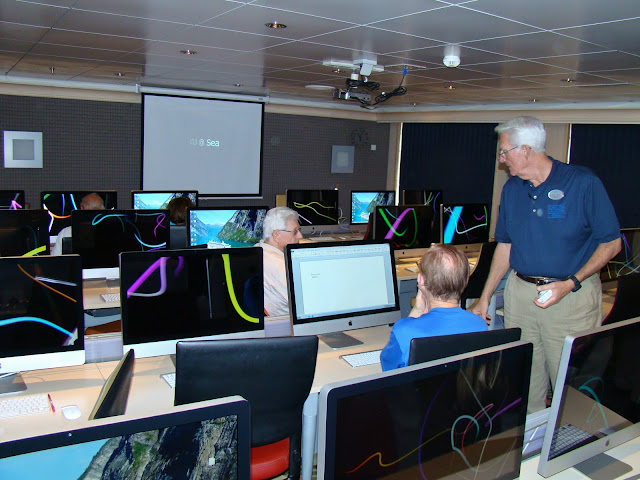 I had to move quickly to the computer classroom for an Adobe Photoshop Elements 9 class that I had pre-registered for online.  Husband & wife team, Mike & Judy Newell, are the teachers.  My newest HP laptop came with this software; & I'd piddled with it at home.  But I basically had no idea what I was doing.  Today’s lesson was just a quick overview in which we did elementary editing to five photos.  Little did I know that this was the first of a series of Photoshop classes?  There is a waitlist for each of the 3 remaining classes.  I asked to be put on the list; but later found out that they will be held on sea days at the same time as my bridge classes.  What to do??? 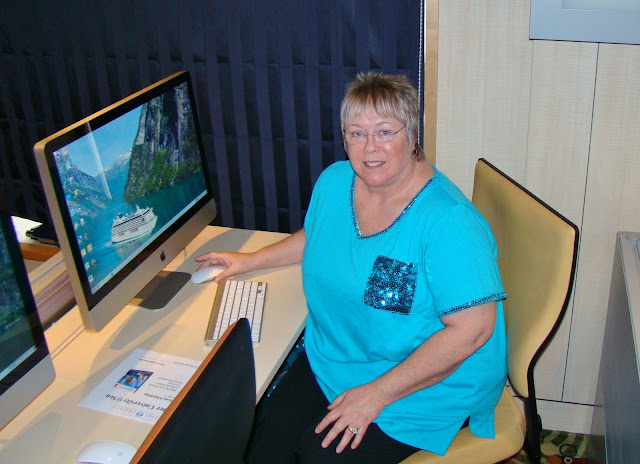 The Latin Buffet was taking place up on the Lido deck.  Since I’ve taken & posted dozens of photos of this festive display of Mexican food, I chose to eat in the main D.R. again since a few things on the menu looked promising.  Enjoying a table in the sun by the window, I started with the ceviche tasting appetizer.  This trio sampler consisted of a scallop with a wedge of blackened tomatillo topped with finely diced onion; shrimp sitting atop a cucumber slice with diced roasted red peppers, topped with 2 kernels of popcorn (?); and tuna/coconut milk salad over fried plantain chips.  It made a beautiful presentation; & all three were very good.  (As you can tell, I like to try ‘pretty’ foods.) 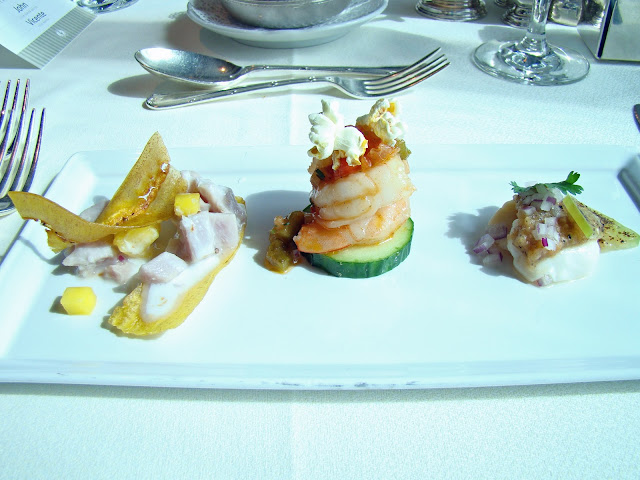 Next I had another awesome cream soup.  This time it was a spicy corn & tortilla soup.  Just the right amount of spiciness for my palette. 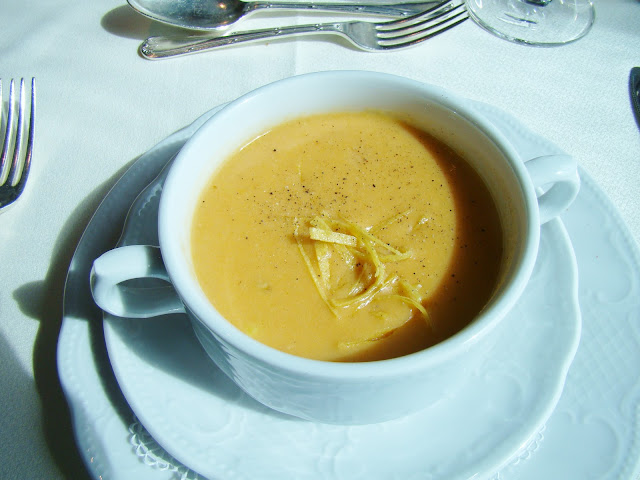 My entrée was chicken enchiladas with a spicy cream sauce, guacamole & refried beans.  The enchiladas were pretty good.  The beans were a bust IMO; & they didn’t look very appetizing on the plate either.  I guess you can’t knock it outta the park all the time. 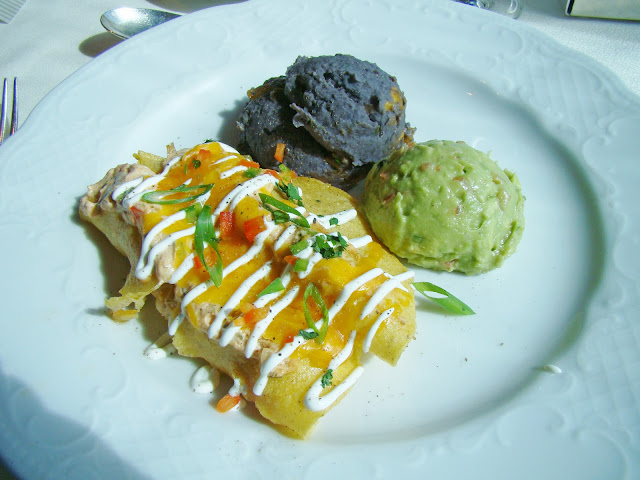 After lunch I took a stroll through the onboard shops.  This area of the ship was renovated during the recent refit.  It does look striking; but it appears to me that there is less merchandise in a fancier, more open space.  The jewelry shop (Facets) is beautiful; minor cosmetic changes there.  And the Captain’s Choice (hiding on the corridor heading toward the casino) looks unchanged.  I was hoping to find some kind of world cruise paraphernalia; maybe a windbreaker.  Unfortunately, they only had some baseball caps & polos.  I suppose it wouldn’t be quite fair to sell a WC jacket to everybody, as that was another one of those special gifts that were given to the full WC passengers. 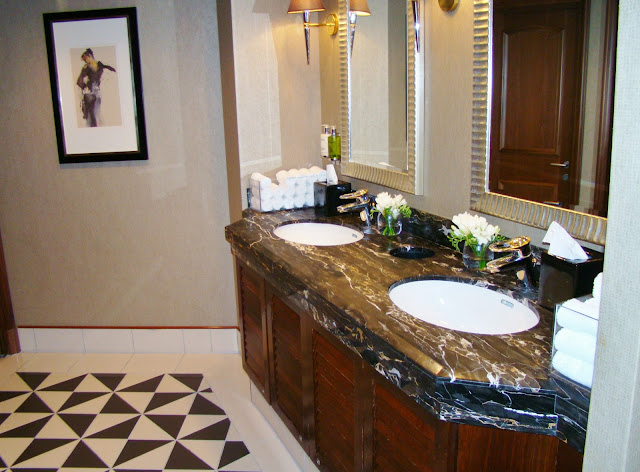 I made a pit stop in the restroom near the lobby area.  I’ve posted photos of the restrooms on the blog in the past; but it deserves repeating.  It’s not one of those ‘if you’ve seen one, you’ve seen them all’.  Even the restroom next to the pool is this ‘nice’.  Notice the bottles of soap & hand lotions beside the sink & the neatly rolled wash cloths with which to dry your hands.  And to maintain the utmost in cleanliness, there’s a dispenser by the door with little paper napkins so you don’t have to touch the door handle.  My point is....I want everyone who might be interested in trying a Crystal cruise to know that it is indeed first class out here; but never prententious (as some may think). 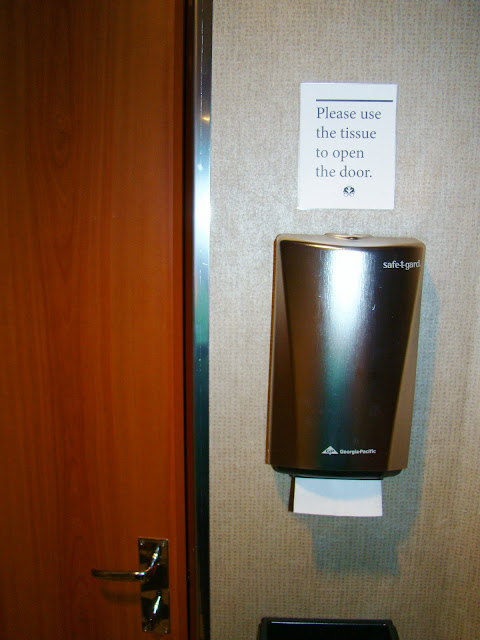 Can’t seem to do a lot of walking; the right hip & knee start hurting within half an hour or so (not a good sign for all those long tours I have booked down the road).  So, I headed back to the cabin; & watched another celebrity lecture by Wendy Chamberlin entitled “our troubled relationship with Pakistan”.  Wendy was a former Ambassador to Laos & Pakistan, as well as the former head of the National Security Council.  As I said yesterday, I don’t give a lot of thought to world politics at home; basically because there’s nothing I can do to change it.  But Wendy’s talk made me at least understand why it is what it is.  Did you know that in the history of Pakistan, their democratic ruling parties continually fail due to corruption?  (That parts not so unusual.)  The people then BEG their Army to come in take back control so that everyone will be treated fairly.  When things get better, they elect new officials; & the process starts all over again.  Their Army is the one & only thing that holds the country together.  Her talk was great; but the Q&A afterward was even more interesting.  Too bad there wasn’t time for more questions.  Sea days are always packed full of activities; and especially so with the added celebrities/dignitaries that speak during a world cruise.  You give someone an hour in the Galaxy Lounge; & they better be out on time, because another event is sure to be taking place in that same room within minutes. 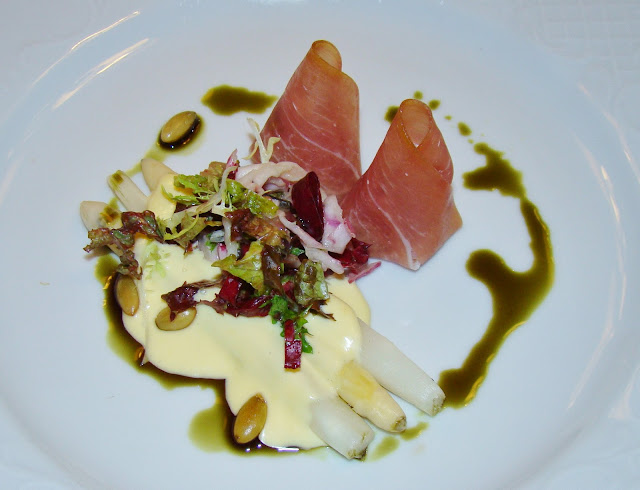 As I mentioned earlier, I laid across the bed for a short nap.  I worked on the computer for a few hours; & then paged Elizabeth with my dinner order.  She returned shortly with lots of goodies.  I had a fabulous appetizer of poached white asparagus with little rosettes of San Daniele ham (prosciutto) drizzled with pumpkin seed hollandaise sauce.  The ham was succulently sweet in contrast with the tartness of the sauce. 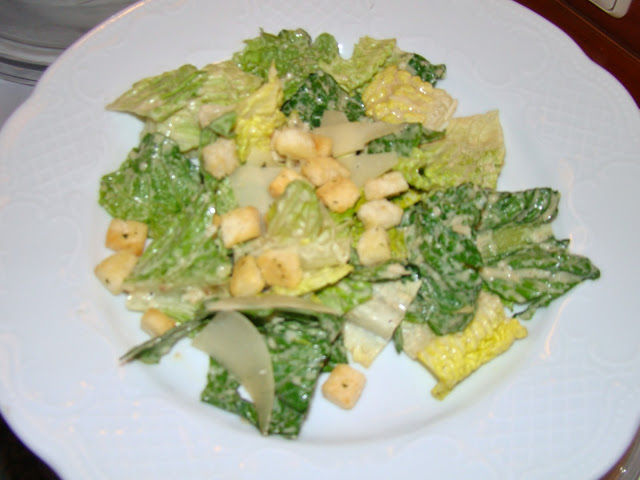 I had some Caesar salad followed by a pork sampler.  There were 2 small pork chops that still had the skin on from a roasted sucking pig.  There were 2 small slices of roasted pork loin & two of the cutest little honey glazed boneless baby back ribs.  The pork was outstanding.  This dinner was supposed to come with turnip hash (not really sure what that would consist of) & brioche bread pudding.  After sampling the brioche bread pudding on the dessert buffet a few days ago, I did not wish to have that again.  Instead, I substituted creamed spinach & burgundy braised vegetables.  Both were divine! 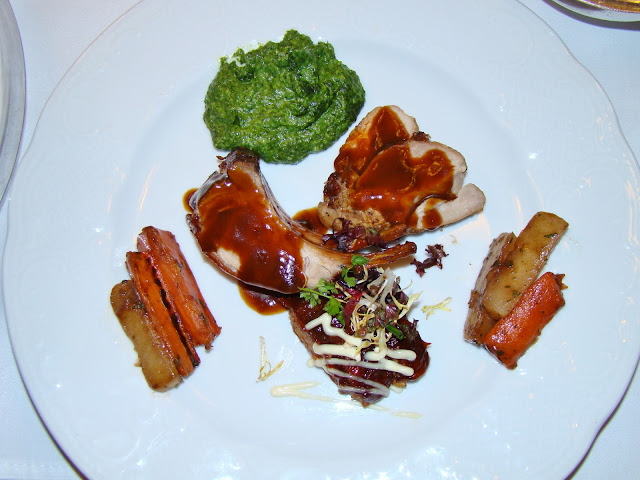 For dessert I thought I’d give the sugar-free chocolate cream (puff pastry) swan a try.  It was plated very prettily; & was quite good.  It’s now 1:30 am; & I’m pooped.  Fortunately, we get to run the clocks back another hour tonight (which should put us on Honolulu time).  So, let’s see how sleeping in the starboard to port direction works out…… 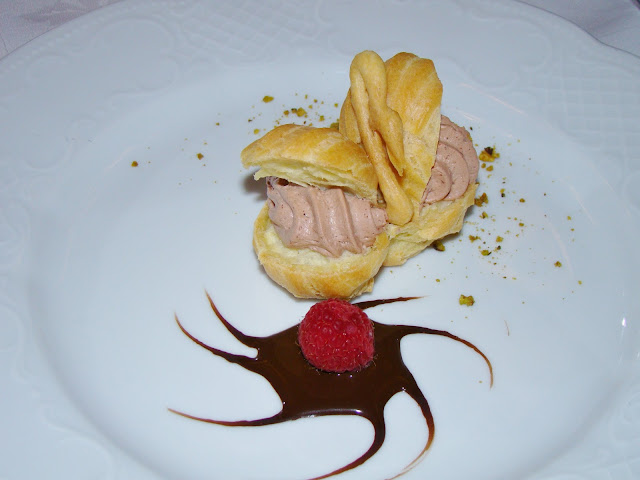