Thanks to continually rolling seas throughout the night, I slept like a baby.  I was awake at 7:45; watched the morning show on TV.  I logged on to the internet & attempted to upload blog photos; but it was moving at a snail’s pace.  Try again a little later.


I had a few errands to run before breakfast.  We have been given 2 forms to fill out prior to our arrival in Australia:  an incoming passenger card & an outgoing passenger card.  The usual paperwork when traveling internationally: Are you carrying tons of money?  Have you visited a farm in the last 30 days?  Are you transporting any seeds, plants, animals, or parts of animals??  Why are you here?  Who can we call if something bad happens to you while you’re here?????  I’m sure this is the beginning of many such forms to be filled out during this voyage.  Even though the deadline isn’t until Monday, I turned mine in this morning or else I might forget.  I also stopped by Reception to pick up the Guest List booklet for this voyage.  Since not everyone enjoys having such a memento, one must request one (rather than to kill an extra tree & discard them later). 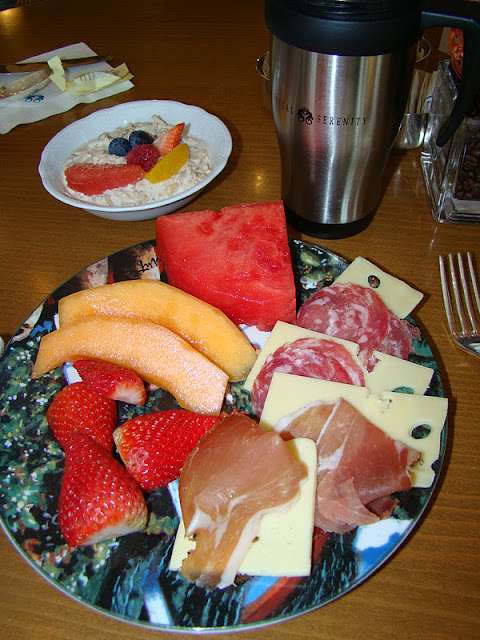 I still made it to the Bistro before it opened (this early morning stuff has got to stop).  There was enough time for 2 capp’s today.  I had the usual assortment of fruit, cheese, meats & muesli for breakfast.


While enjoying breakfast, Capt. Glenn gave his morning report from the bridge.  We’re cruising at 18.3 knots; & with a strong tail wind pushing us along, we’re only running on 3 of our 6 engines (should greatly improve our gas mileage).  He expected nice weather today.  And he wanted to remind us that we will be crossing the equator a little after 9 pm tonight.  He said, “You’ll know when, cause you will feel it”.  Ahhh,huhhh.  His quote for the day….”A good heart is better than all the heads in the world!”


I stopped to chat with Celeste & Bill in the Crystal Cove about tours that we had prebooked.  And I lost track of time; & was little late for bridge class.  I sat at the usual table with Kim, Elaine & Louise.  Nothing new to learn today; we reviewed yesterday’s lesson; & played several hands that Eddie had pre-dealt & ‘stacked’ to test our strategy skills. 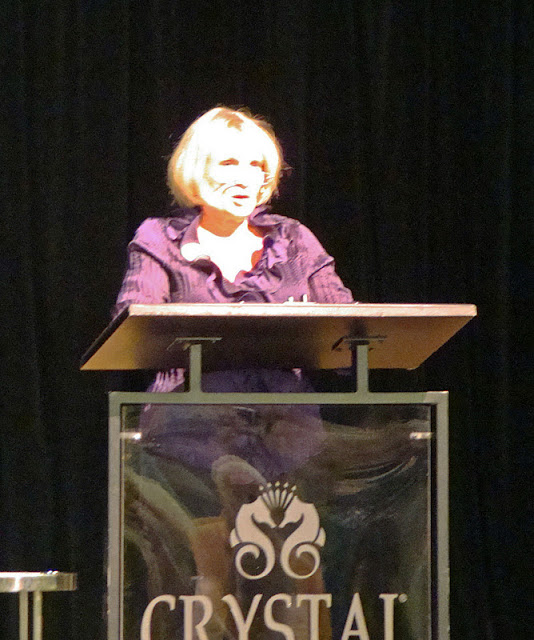 From class, I went to the Galaxy Lounge to hear Ambassador Wendy Chamberlin’s talk on the “Arab Awakening”.  (Yes, I actually made it to a lecture LIVE.)  She summarized the events that have lead up to their ‘spring awakening’.  In the last 20 years, the population of 20-30 year olds, has tripled.  Through the social media, western ideas are spreading throughout the Arab countries.  Though unemployment is high, they see the great wealth all around them in the regions of the Gulf.  They expect to have that standard of living through the Middle East; & they are becoming organized & quite vocal.  They still respect their morals & standards; detest the violence preached by bin Laden; & are using peaceful measures to fight for equality.  She warned that we should not confuse anti-Jihadism with ‘westernization’.


About 12:45 I was ready for some lunch; & I took a look at the D.R. menu before I made the decision to go upstairs & eat at the Lido.  The string quartet was playing in the Crystal Cove; & with the sound of the waterfall, it made for a very serene setting.  I thought about going back down there after lunch to do some reading.  The partly sunny skies had now turned dark; & rain was beating on the windows.  Reading & a nap would be a perfect way to spend the afternoon.


I found a free table all the way aft; & got up to peruse the selections.  Liebert came over to show me that he was starting to hoard Dr. Pepper’s up there for me.  I’m telling ya…..the Lido guys rule!  I saw several meat dishes I wanted to taste; but I was also craving salad. 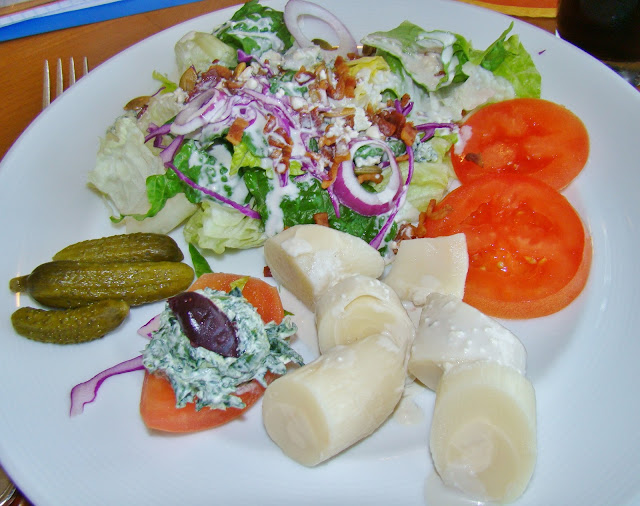 I started with a custom made salad from the salad bar, lots of hearts of palm, an appetizer of spinach & cream cheese on a tomato ‘petal’. 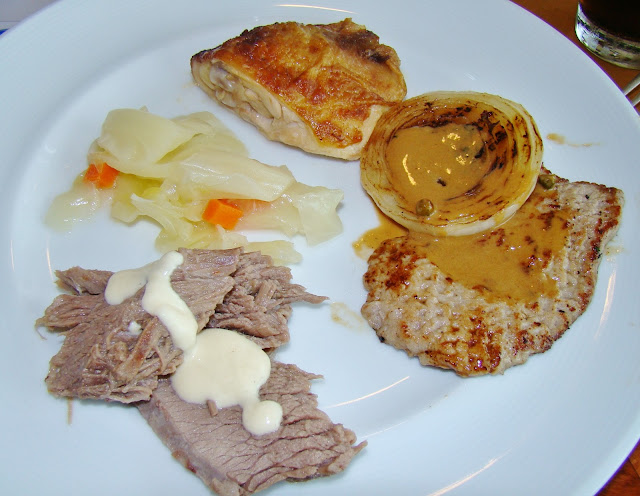 Then this carnivore went in for the kill…..I had some veal scallopini with grilled onions & creamy peppercorn sauce; some teriyaki glazed grilled chicken; & broiled beef brisket with horseradish mustard sauce served with cabbage.  Not massive amounts; just a nice sampling of each.  Everything I had was excellent; & really hit the spot.


As I was leaving the Lido, I saw Peggy & Elaine sitting off to the side.  So, I went over, sat down; & I got to pick her brain about her comparison of world cruising on Regent & now on Crystal.  Those 2 have been to a lot of places on a lot of different lines; & I greatly enjoyed listening to their stories. 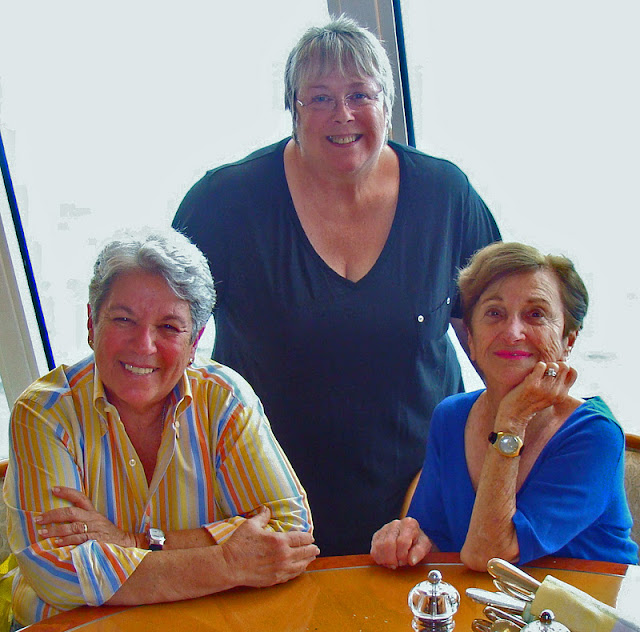 I thought I’d test the speed of the internet again; & it was acceptable enough.  Was able to get the blog & all of yesterday’s photos uploaded.  AOL, however, was painfully slow; & retrieving my email seemed to take forever.  (BTW, Capt. Glenn, it’s still pouring down rain outside.) 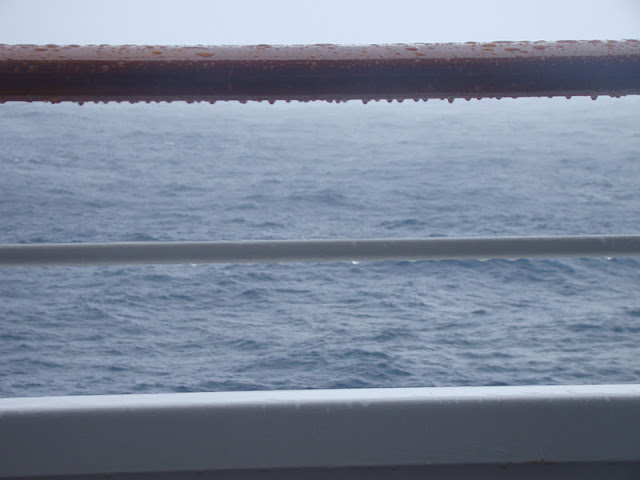 Tonight was the Crystal Society (past passenger club) cocktail party up in the Palm Court Observation Lounge.  They had a party for the early seating at 5:15; 7:45 for the late.  I figured if I was going to go, it had better be at 5:15.  So, I had just enough time to primp & dress in formal attire.  Everyone looked so festive.  My bridge partner, Elaine & her SO (Victor) showed up wearing the family tartan plaid; he in his kilt & her in a matching long skirt.  They looked so cute. 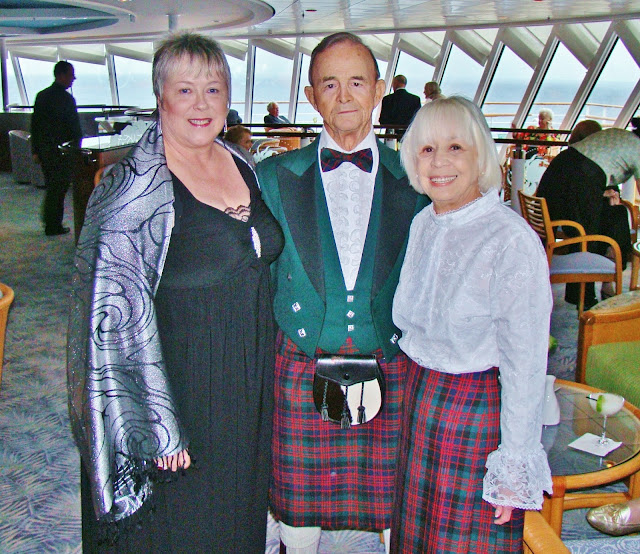 Peggy & Elaine also looked lovely; & we joked that we CAN clean up pretty good if we try hard. 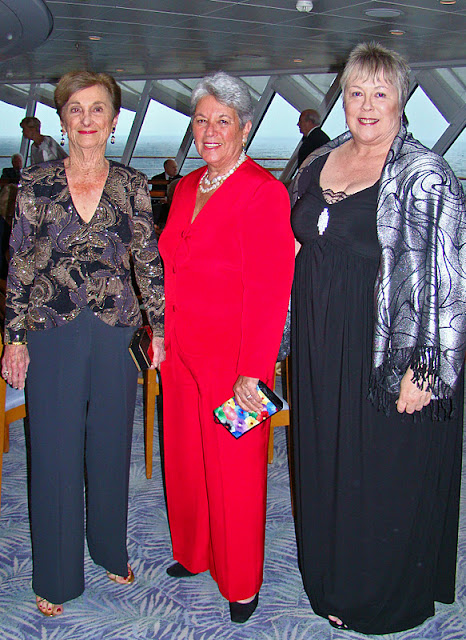 Keith & Anne Marie were tripping the light fantastic on the dance floor.  They were recognized at this party for having passed another Crystal milestone (40 cruises). 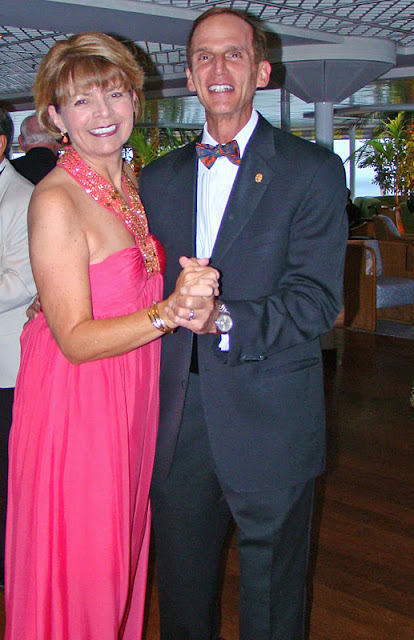 During the Crystal Society party, they acknowledge those who have sailed with Crystal a ton of times.  In addition to Keith & Anne Marie, there were many whose names were read for having sailed 40, 50 or more times.  The infamous “Mama Lee” was mentioned for her 90th Crystal cruise.  [Knowing that Mama Lee ‘lives’ onboard; & has for several years, I thought that number sounded low.  But after pulling Jaque Brown (Crystal Society Hostess) aside, she confirmed that the number is correct; Mama Lee (who is from FL) has been onboard this ship for about 3 years.]  There was one couple who were on their 142nd; & Mr. & Mrs. “T” from Japan who were on their 197th Crystal cruise.  They are my heroes!


For most of the evening, I sat close to the dance floor; & lots of people stopped by or sat down to chat.  I met Janice & Joanna (both from CA).  Rabbi Maury (who I had heard so much about through Keith & Anne Marie’s blog) sat with us a while.  World Cruise Hostess, Elise, also stopped by & chatted with our group.  It was a good night to be out.


Since I made the effort to dress up, I thought I’d stick my head in Silk Road & maybe have some sushi appetizers if there was an empty seat at the sushi bar.  Most nights one has to make advance reservations to get a table in this Asian restaurant (run by world famous chef, Nobu Matsuhisa). There is limited seating at the sushi bar; first come first served.  Formal nights are the least crowded in the specialty restaurants; & I got lucky.  There were several empty seats; & even Nick & Kazuko (that I sat with in the D.R. last Sun. night) were seated next to me. 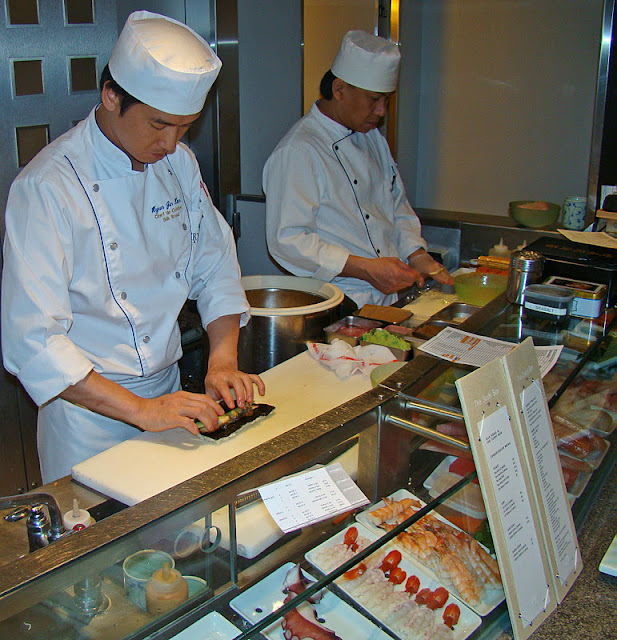 It is so entertaining to sit right across the bar from the chefs as they prepare these elaborate platters of sushi & sashimi.  They welcome questions, comments & the oohs & aahhs.  It’s truly an interactive experience.  I ordered the house special roll, which is filled with 5 different types of raw fish.  It was outstanding. 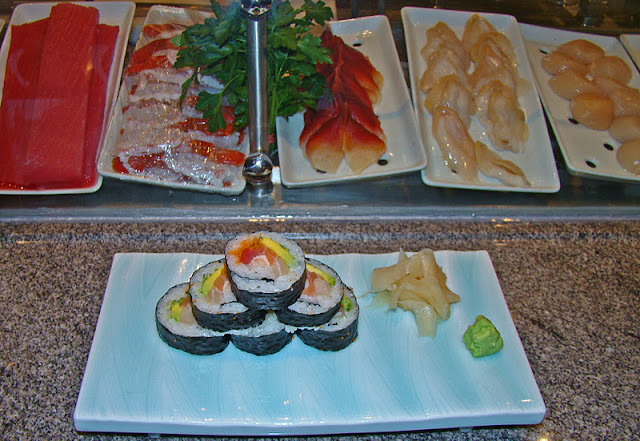 After 2 hours, I’d had enough of playing dress up; & I headed home.  The ship is really rolling & pitching tonight.  Every now & then you hear a thump & feel a little ‘shimmy’.  This sound usually means that the stern has been raised up out of the water while going over a swell.  The thump & shimmy comes when the tail comes back down & hits the surface of the water.  So, unless someone tells me otherwise, I’m not going to concern myself with this ‘sensation’.  It makes things a little more fun when moving about in the cabin; & settling into sleep mode that much more relaxing.  (Or on 2nd thought………..could this be what Capt. Glenn meant when he said we would ‘feel’ it when we crossed the equator?)


The French menu is one of my favorites; so I already knew what I wanted for my main dinner.  I gave my order to Liz; & got in my PJ’s.  About 9:15 she knocked & brought my order.  One must have the escargot on French night.  Amazingly, mine was still very warm (not hot) when it arrived.  I think someone forgot to put the garlic seasoning in the butter; because I could taste none.  It was still very good. 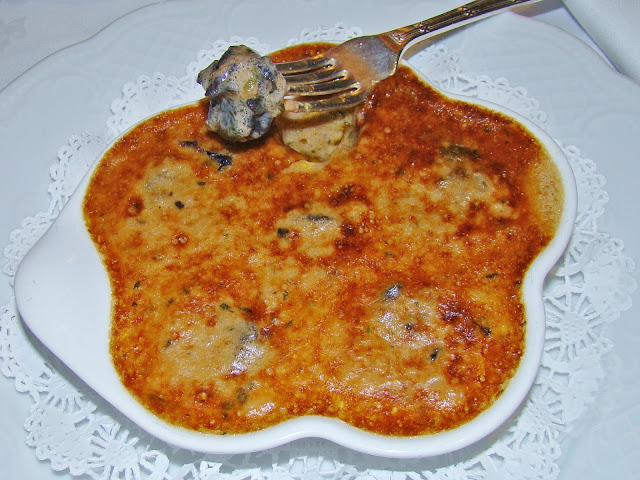 I had another appetizer sampler, called the ‘seafood rendezvous’.  It consisted of 3 bite size samplings:  a poached scallop with lemon oil; a lobster medallion with a dollop of roulade; & a tiny crab & squash tartlet.  Beautiful; & delicious. 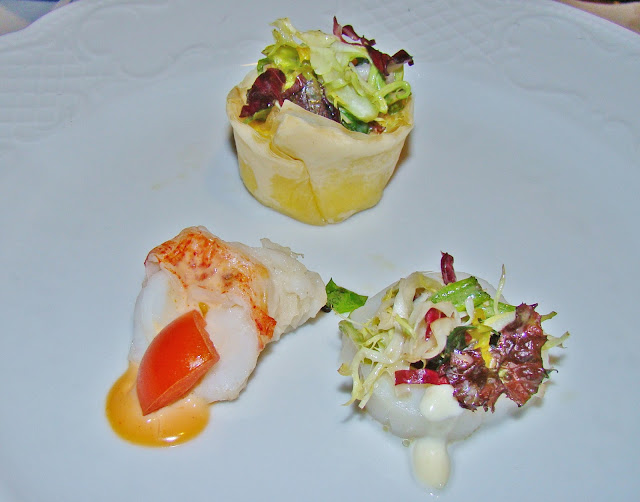 For my main course, I had an appetizer portion of tonight’s pasta special.  Fusilli (corkscrew) pasta with pancetta, mushrooms, onions, tomatoes, cream & drizzled with white truffle oil.  Yes, I had Italian on French night; but it was excellent. 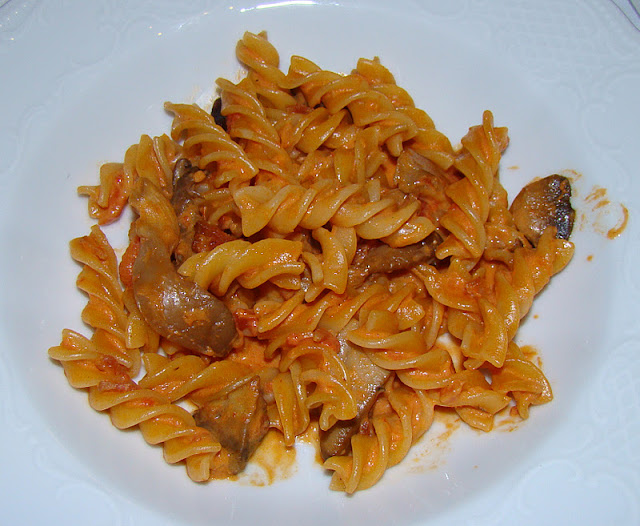 I’ll probably wait till in the morning to try to upload the blog.  I’m pleasantly tired; & would like to just lie in bed & enjoy the rocking until I fall asleep (which hopefully will be soon).

Love your blog! Thank you for giving me something to look forward to every day.

Becky, The best Italian meal I ever ate was in Paris (the best Chinese food as well, and the best pizza until Santiago)!

I have to say the food looks way better than HALs. Way better.

I'm having my kitchen torn up right now, though, so tonight is takeout. I wonder if your stewardess would drop by my cabin....

drtee, I'm sure Liz would be happy to oblige. Better yet....you should be in the cabin next door. What fun, huh?

I'm playing catch up on your blog now. I get a few days behind and have to read several. Love the dress! You look fabulous. I wish I could find someone to do those razor cuts. Nobody here wants to cut with razor anymore. Also the lady in red ... that is her color! Her red just popped. But all of you all look great!!!