January 29th
Somewhere on the southern side of the equator…..deep in the Pacific

The movement & sounds of the ship during the night were interesting in a strange way.  When I woke up I was still contemplating that ‘crossing the equator’ sensation we were supposed to ‘feel’.  Since my internal alarm clock now wakes me up just before the morning show starts at 8, I was hoping maybe the Cruise Director would mention what (if anything) went on during the night.  He did not.  So, I went on with my usual morning routine.   Got to the Bistro just before it opened at 9.  I can hardly wait to get to the luscious muesli every morning. 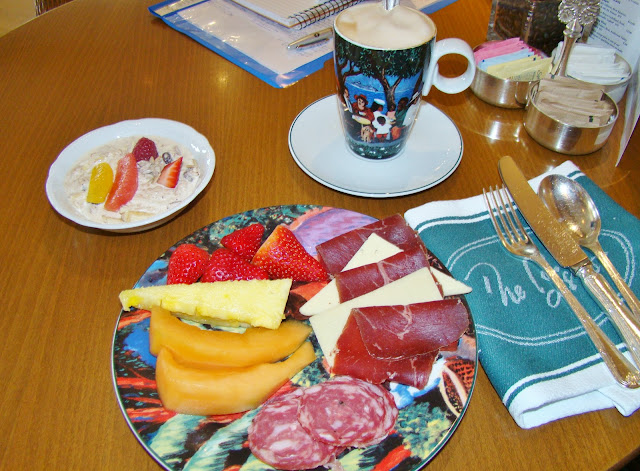 Capt. Glenn started his morning report from the bridge with a partial explanation of the ‘ride’ last night.  At some point in the early evening, they slowed down to do some sort of ‘service work’.  There were strong head winds (possibly why the stern was rising & plopping back down in the water).  When the work was done, they made a course change to work around the head winds; & accelerated to 23.8 knots (26 land mph) on 5 of the 6 engines in order to make up the time we had lost during this ‘service’.  Even though the ship has stabilizers to lessen the effects of rolling seas, they are not often used when distance & speed are a factor.  Doing so slows the ship’s speed.  So we didn’t actually cross the equator until sometime between 3-4 am this morning.  And, no, there was no noticeable difference! 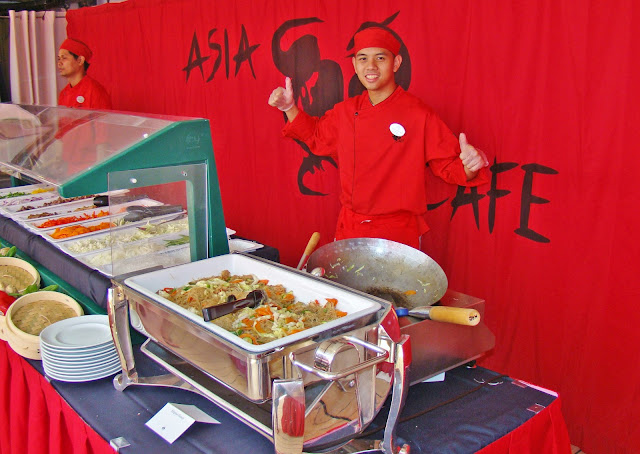 Bridge class was kind of a repeat of yesterday.  We dealt hands that we laid out (face up on the table) so that all 4 of us could see each other’s hands.  Eddie walked us through possible scenarios…..what would happen if we played this card first or that card first.  And then he coached us on how we should respond.  Play it through & then learn from the mistakes we inevitably made.  It’s a good way to learn; but all those cards staring back at me are confusing my poor little brain.  But his reasoning is to teach us more ‘what not to do’ than ‘what to do’.  I was relieved to hear that we won’t get into lessons on bidding until after Sydney.  It’ll give me enough time to reinforce what I think I’ve already grasped.

The big Asian Café themed buffet was held at lunch today around the Neptune pool.  And I went up to sit in the quiet of the Lido Restaurant so I could read until they opened the buffet.  About 11:30 the wait staff poured into the restaurant; everyone talking loudly & joking around.  The head waiter was giving them instructions of who would be stationed where; & then they proceeded to break up into tables of 3-4 & started an assembly line of folding napkins & inserting the silverware.  It never dawned on me who did this job; or when it was done.  But here I was surrounded by men & women, speaking every possible language amongst themselves.  They were ribbing each other about their napkin folding technique; & the head waiter would clap his hands to get them to focus & keep them on task (all the time with a grin on his face).  It reminded me of a scene from my favorite movie, Dirty Dancing, where the waiters at the mountain lodge were setting up for the dinner service & they were cutting up. 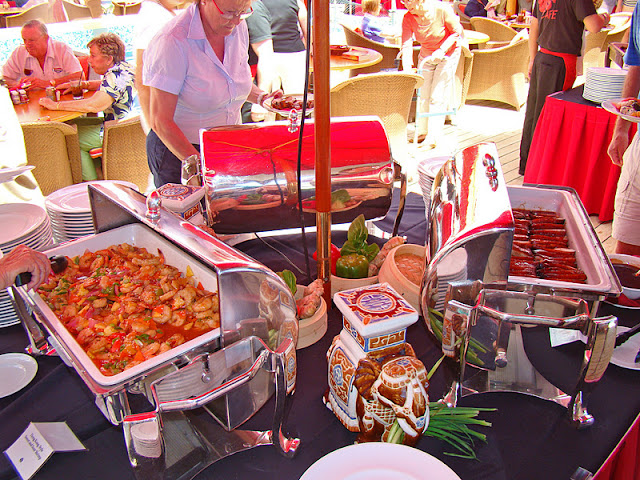 My point is….it was a rare moment for this guest to see these highly trained professionals, just being themselves.  They even asked me if I wanted to fold or bundle the silver.  It was all great fun to watch. 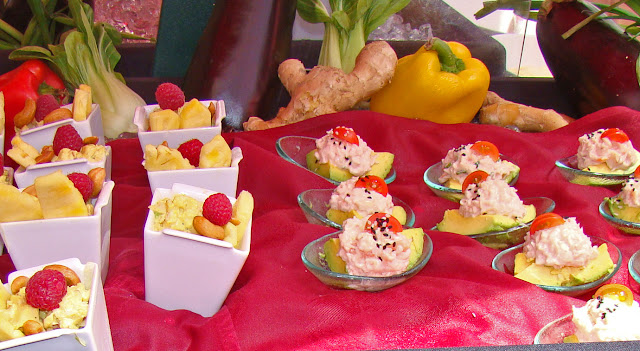 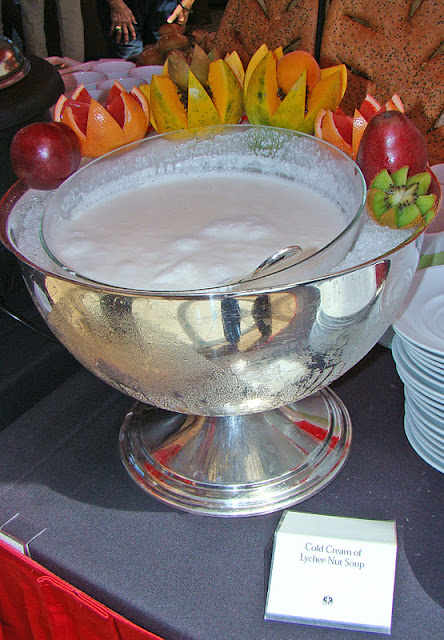 I took photos; & at the same time made my game plan.  The Asian buffet is one of my favorites after all.  I spotted something that I’d never seen before…..cream of lychee soup.  As crazy as I am for lychees, this will not be on my favorite list.  It reminded me of melting lychee sorbet; only not in a good way. 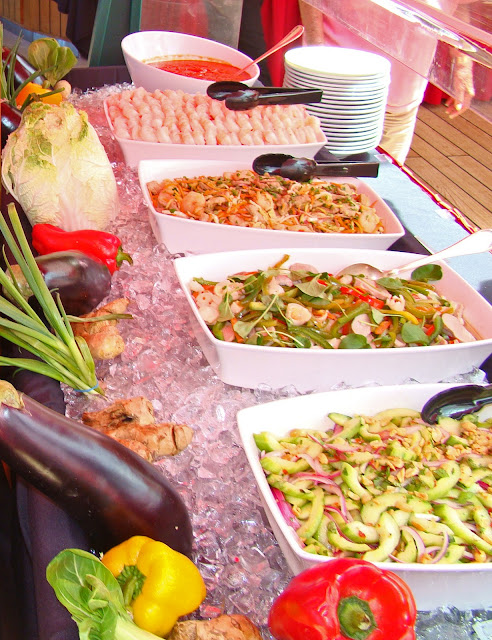 From the appetizer section, I chose a delicious crab salad served on a little avocado ‘boat’, rice paper roll with sweet chili sauce, a few prawns with cocktail sauce, Vietnamese pork & prawn salad, & lots of hearts of palm.  Everything I tried was delicious. 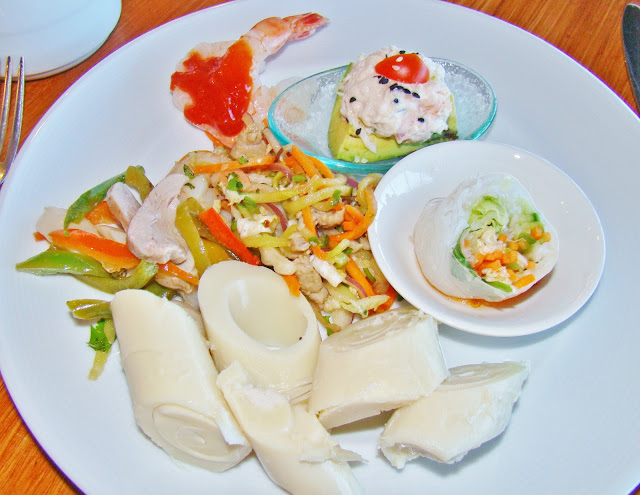 From the entrée selections, it was hard to narrow it down to just my favorites.  I had spicy orange chicken (flavor was great; but the chick was a little tough), Char Sui pork belly (always a winner), sweet & sour shrimp with lychees, Philippine rice noodles with chicken & veggies.  But the big winner, as always, is the eggplant stirfry.  I could eat a plateful of that stuff. 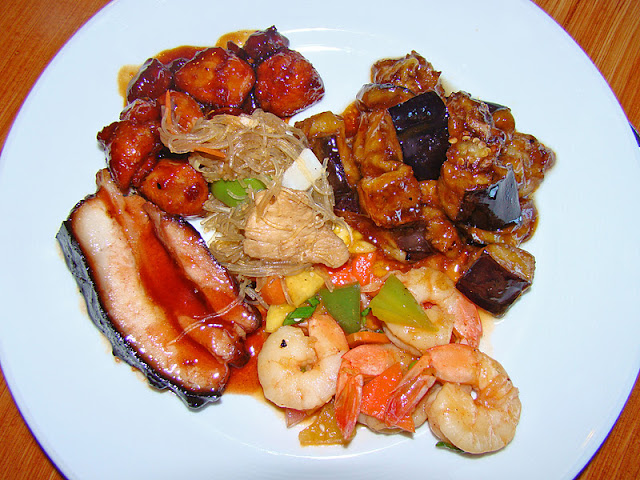 I was nearly half finished, when Jamshed joined me.  I hadn’t seen him in a few days; & we caught up on our comings & goings.  He told me that our friend, Pauline Hoff, was recognized at the 2nd seating Crystal Society party last night for having completed 266 Crystal cruises.  That beat ‘our Mr & Mrs T’ with their 197.  Makes me wonder……who is the all-time record holder?  I shall ask Jacque Brown that very question next time I run into her.


I intended to go back to Silk Road & maybe play some social bridge with other beginners this afternoon; but I was wiped out for some reason.  As often happens to a lot of us when we cruise, my feet & lower legs have been swelling a lot.  And it feels good to lie on the bed & put your feet up on the wall until the swelling comes back down.  I laid that way & read for quite a while.  But I guess at some point, got into a fully reclining position & fell asleep.  I woke up 2 hours later wondering how that happened.  It has been a beautiful warm day.  I sat out on the verandah & read a little more until about sunset.

Tonight’s D.R. menu didn’t necessarily appeal to me, especially after such a big lunch.  I got comfy very early.  I hadn’t even turned on the computer today; & had some catching up to do.  About 8, I called Liz & requested a patty melt & a hot dog (for later).  We chatted a little when she brought that about 8:30. 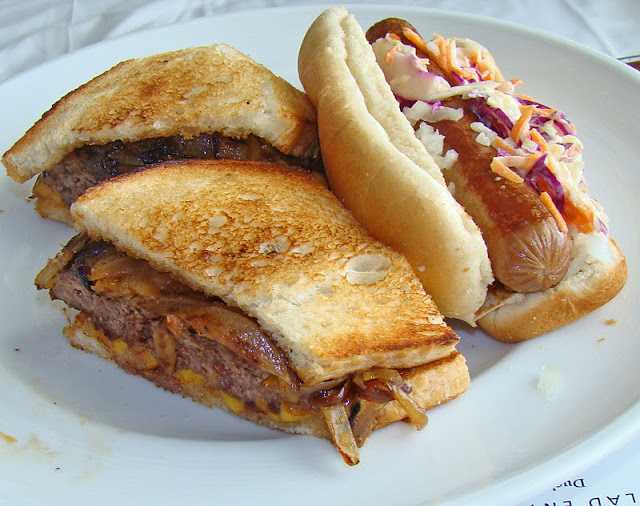 So, I’ve been typing a little, grabbing a bite, editing a photo or two, grabbing a bite, etc. for the past 3 hours.  The seas feel very calm tonight in comparison to the last two.  I hope that & the nap I took this afternoon doesn’t interfere with my sleep.  I’ve been on a roll; & I’d hate to break it now.