The last thing I remember reading…….. Buddha was telling me to let things go.  Don’t say “I’m not going to die today”.  Instead, think of it as, “I may die today”.  “Nothing matters except this moment.”  That philosophy may have some profound meaning at some point in the future.  But I did somehow fall into a deep, dreamless sleep; which might have gone on longer had I not been jolted out of bed at 6 with a (thigh) muscle cramp from hell.  The kind where it only takes a nanosecond for your feet to hit the floor.  Neither walking, stretching, nor a few profane words were working.  I tried rubbing alcohol, which fortunately helped (not sure why, but I’d read it somewhere).  Not being able to go back to sleep, I laid there thinking that Buddha would have been very unhappy with my reaction to this ‘inconvenience in life’. 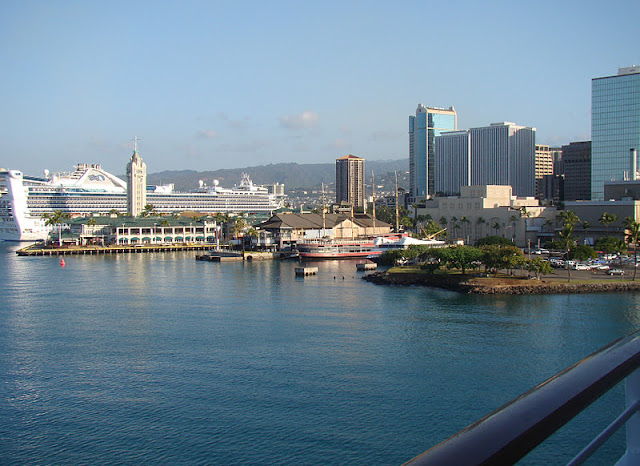 When I stepped out on the verandah to see the beautiful Honolulu skyline, I realized that the ginormous Golden Princess had arrived & was taking up all the space at the Aloha Tower.  The air was already very muggy; & I knew it was best to leave the ship earlier rather than later.  So, I did not make a stop for coffee or breakfast.  I was on the pier in time for the 10 am shuttle provided by Crystal to the Ala Moana Shopping Ctr.  I vividly remember visiting here twice before; having my very first ‘orange julius’ in the mid 80’s & again in the early 90’s.  The driver dropped us off at an underground terminal outside of the Nordstrom store.  He told us to return to this spot when ready to go back to the ship; scheduled for the top & the bottom of every hour.  I looked around & recognized NOTHING.


I found a map showing the layout; when did this place get so HUGE?  There were numerous transportation terminals all around this place.  One long strip center had suddenly turned into 3 separate, 3 & 4 story buildings!  After a moment of panic, I headed into Nordstrom’s; asking directions often.  I was marking my map showing every twist & turn, praying that I would be able to find my way back to the starting point.  I was in search of one of the several food courts & (hopefully) wi-fi.  Once I found the Makai Market Food Court, I spotted someone with their laptop open; & I thought I had hit pay dirt.  Not meant to be.  There were lots of signals, all secured.  So, I settled in with a strawberry shave ice; & people watched.

Very shortly, 2 Hawaiian ladies walked up; & asked if they could sit for lunch at the other end of my table.  We began a lively conversation about how much has changed since I was here last.  Karen (in her mid 60’s) & her friend, Betty (91 years young) told fun stories of spending their entire lives here on Oahu.  Betty is as sharp as they come & funny as hell.  Like lots of elders do all over the U.S., they come to the mall every day to congregate over lunch.  They were there today to pick up some See’s candy to take home to some friends visiting from (are you ready for this) Covington, TN???  I nearly fell off the chair.  We talked for at least an hour; and it turned out to be the highlight of my day.  As more of their friends started to arrive, I excused myself & went in search of Hilo Hattie’s (always on the lookout for some cute muumuu type thing to wear around the house).  And where do you think I found Hilo Hattie’s……a few doors down from Orange Julius (the exact same location where I had my first O.J. over 20 years ago).  Having had enough of the mall scene & empty handed, I was able to navigate my way back to point ‘A’. 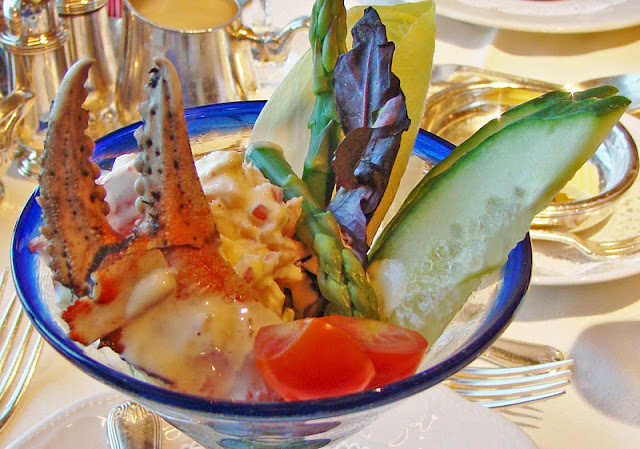 I made it back to the ship about 1; just enough time to have lunch in the main D.R. before they closed.  Dwight had just sat down & invited me to join him.  We hadn’t had a chance to really chat about much during bridge class or at the C.C. party; so I had no idea he was on for the full W.C.  He’s from Huntsville, AL; & we shared an enjoyable lunch.  Surprisingly, we chose the exact same things off the menu. 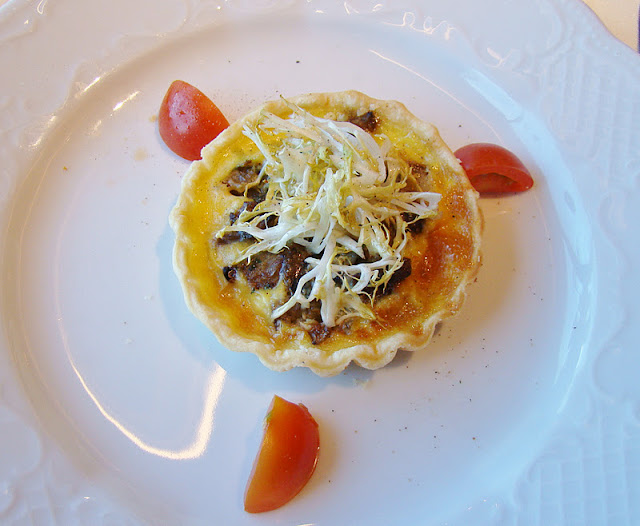 I couldn’t decide between, & therefore had 2, appetizers.  First was a crabmeat & asparagus cocktail over a bed of shredded greens, topped with an orange aioli sauce.  Very tasty & pretty!  Next, we had a caramelized onion, eggplant & gorgonzola tartlet.  This was excellent. 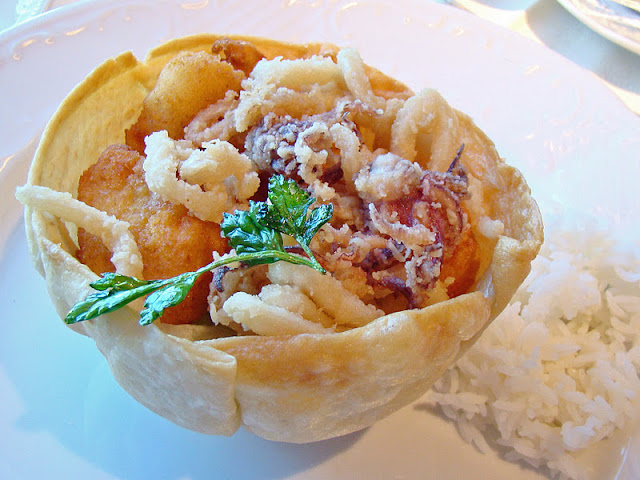 For our main course, we had the Captain’s Seafood Basket, which was a tortilla basket filled with fried calamari, jumbo shrimp, scallops & chunks of cod.  It was served with a garlicky type tartar sauce & a creamy cucumber salad.  One has to wonder…..what do they do with those uneaten baskets?  Such a waste.

Dwight had some frozen yogurt for dessert, while I had my one & only cup of cappuccino for the day.  I have to admit that the capp. in the D.R. is now on par with what they serve in the Bistro.  IMO, this has not always been the case. 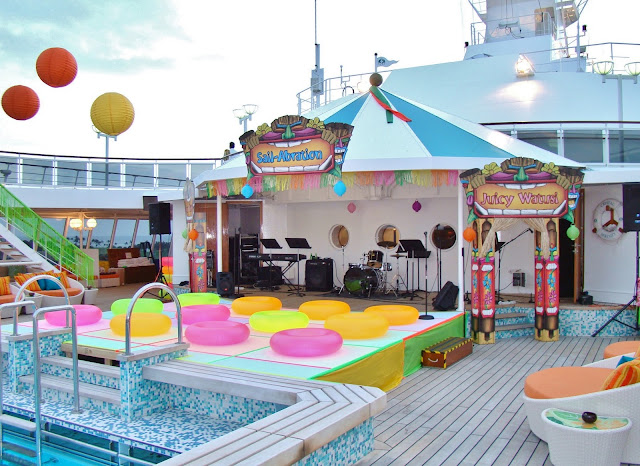 The walking & the humidity had sapped my energy; & I laid down for a long nap.  When I woke up I went up to the Lido deck to watch them set up for the big Hawaiian dinner buffet & ‘Juicy Watusi sail-abration’.  The Lido crew moves swiftly, like a carefully choreographed ballet.  They’re constantly consulting their notes which showed where each tray or decoration is to be placed on the buffet tables.  They do a miraculous job setting up & taking down these buffet extravaganzas so quickly many times during each voyage.  And the ship’s carpenters had constructed an extension to the stage by the Seahorse Pool for a local group (Germaine’s Luau Productions) who were coming onboard tonight. 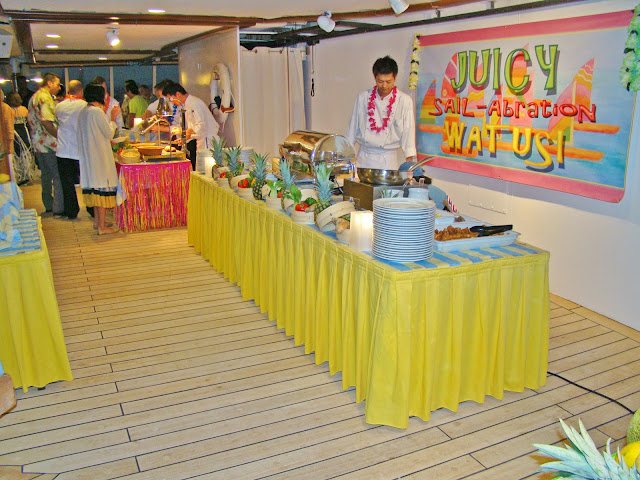 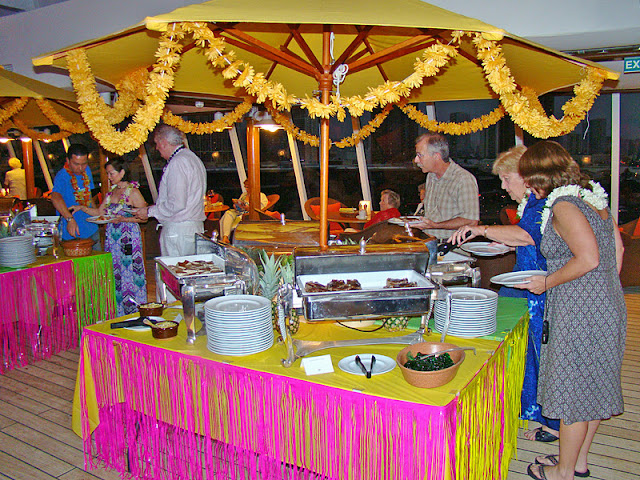 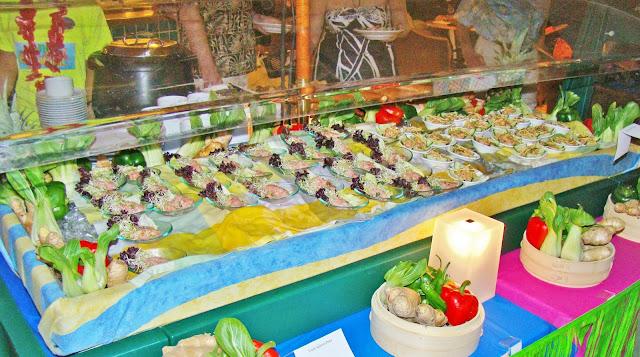 After taking photos, I fixed a plate & brought it back to the cabin.  I had not changed into my Hawaiian attire yet; & you never know what if anything will be left on the buffet after that first hour. There were some outstanding things on the buffet tonight.  I had baby back ribs, lobster tail, fried tiger tail shrimp tossed in a spicy/sweet chili sauce & honey roasted macadamia nuts (this was to die for), slices of grilled sweet Maui onion, a seafood & spinach tartlet with caviar mayonnaise, pickled beet salad, hearts of palm & shrimp cocktail.  IMO, it was an excellent meal that showcased all the best flavors of Hawaii. 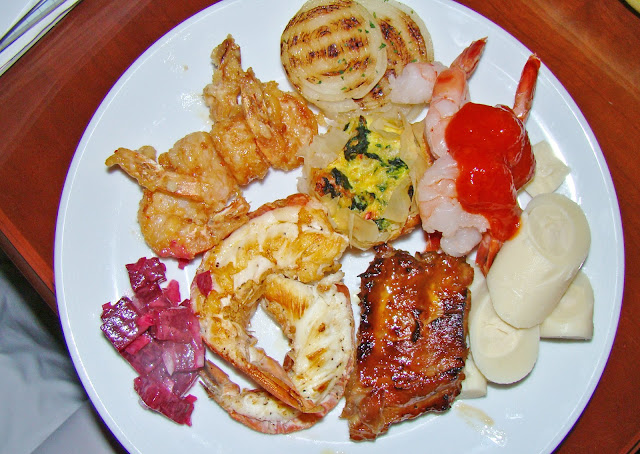 I worked on the blog a while & talked with Liz.  After changing into brighter tropical clothing, I sought a spot on deck 13 above the pool to watch the show.  Unfortunately, there is nowhere to sit up there; but you could catch a tiny breeze every now & then.  I was amazed to see everyone that was stretched out around the pool below, had towels or throws over them.  Certainly they couldn’t have been chilly, while my hair was wringing wet? 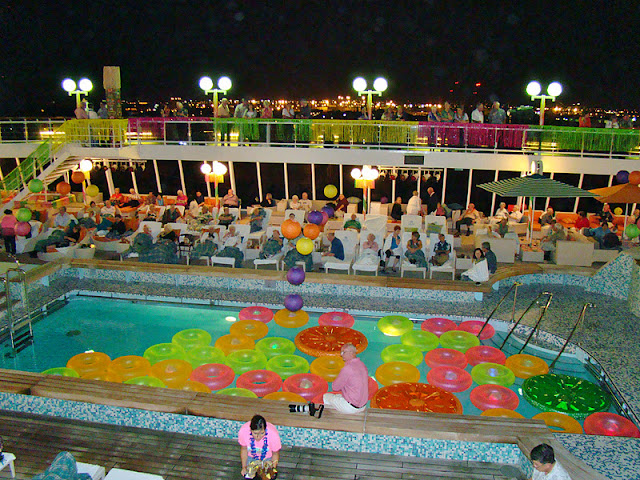 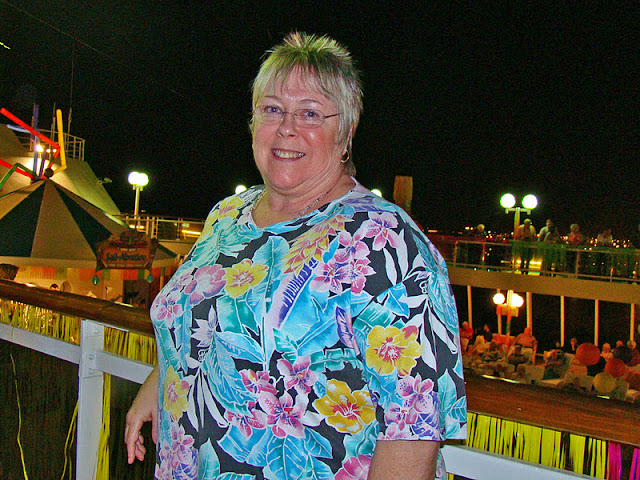 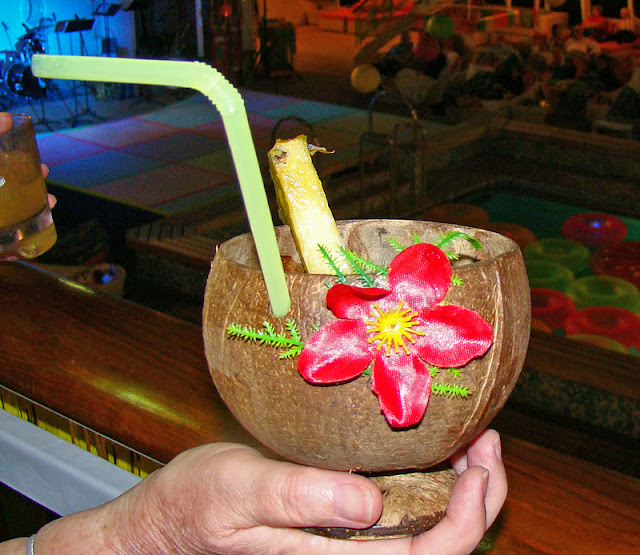 I took tons of photos & even some video (gonna have to take some kind of class onboard to learn what to do with those video clips) of the Hawaiian show.  It was a great show, very high energy.  The local performers started & ended the nearly 90 min. show. 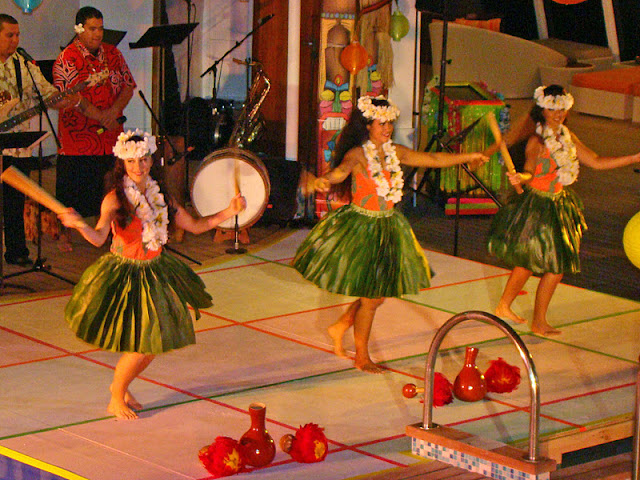 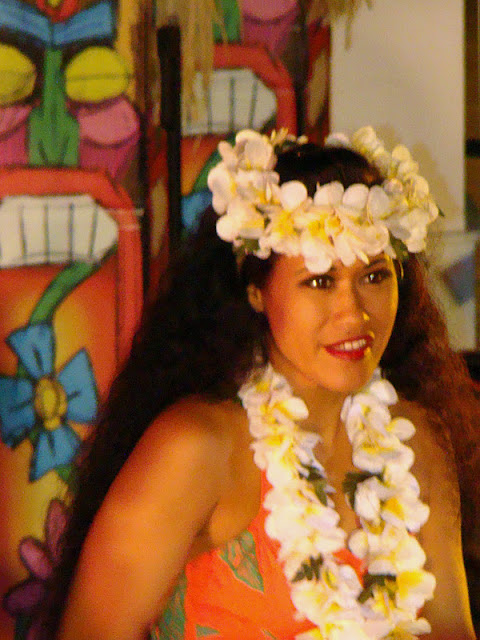 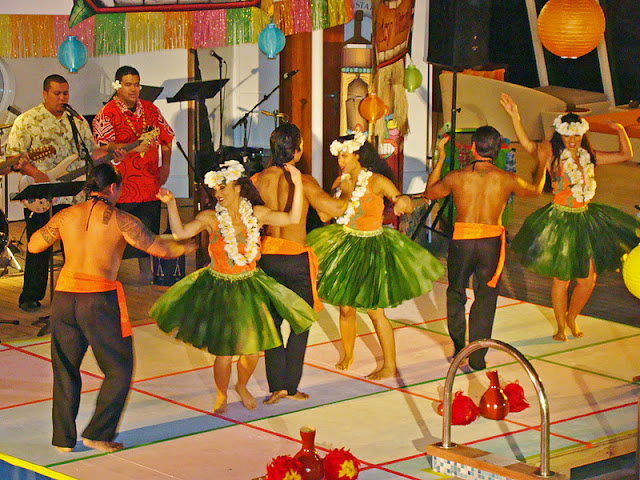 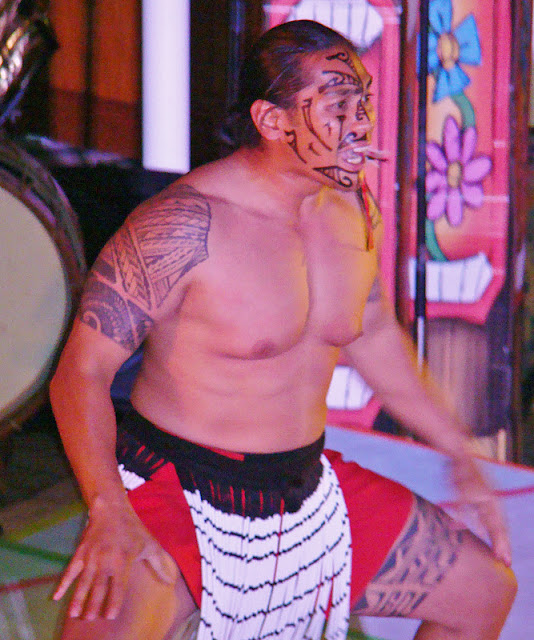 The ship’s entertainment staff provided the ‘juicy watusi’ segment in the middle.  There was complimentary ‘umbrella’ drinks.  I enjoyed a chi-chi in a faux coconut. 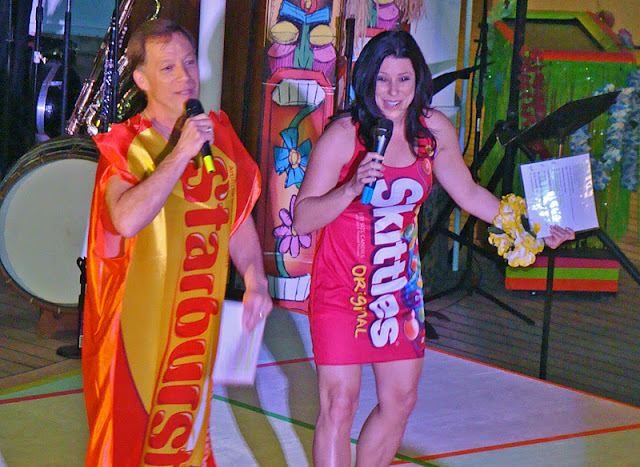 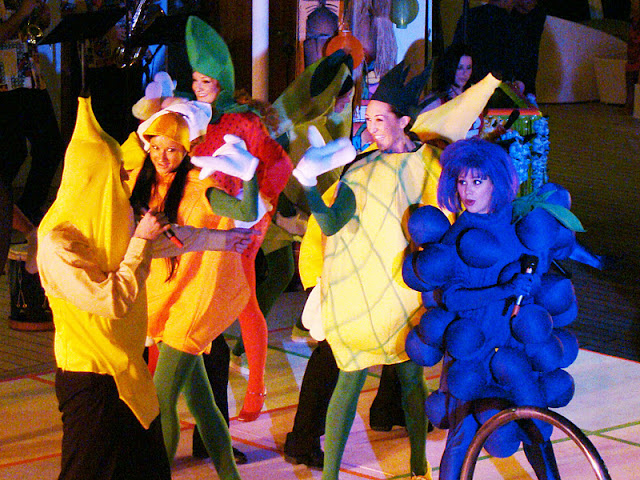 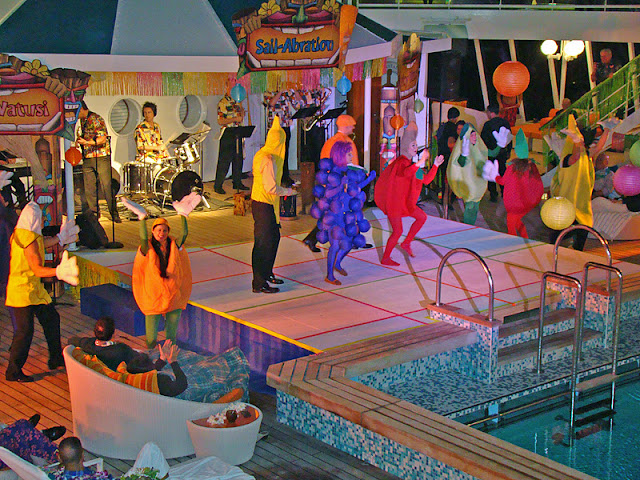 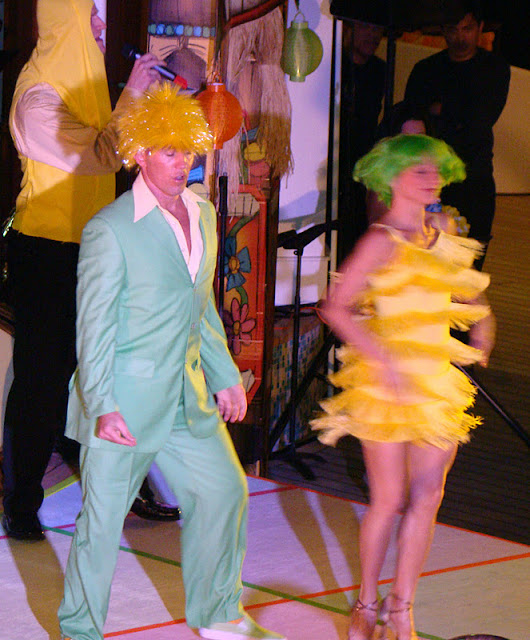 Then the Germaine folks came back & closed out the show.﻿ 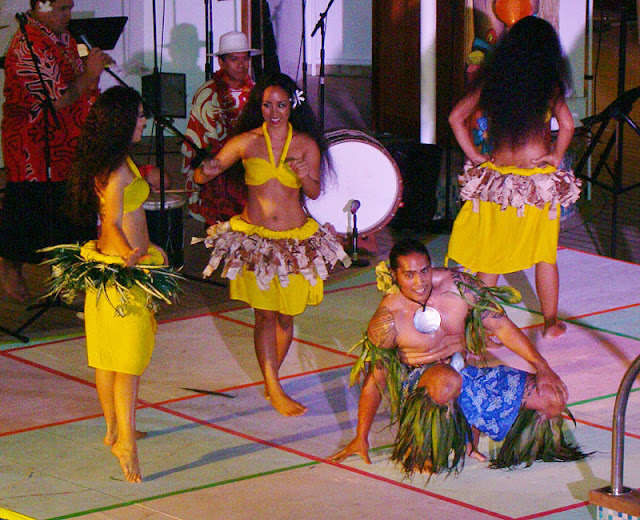 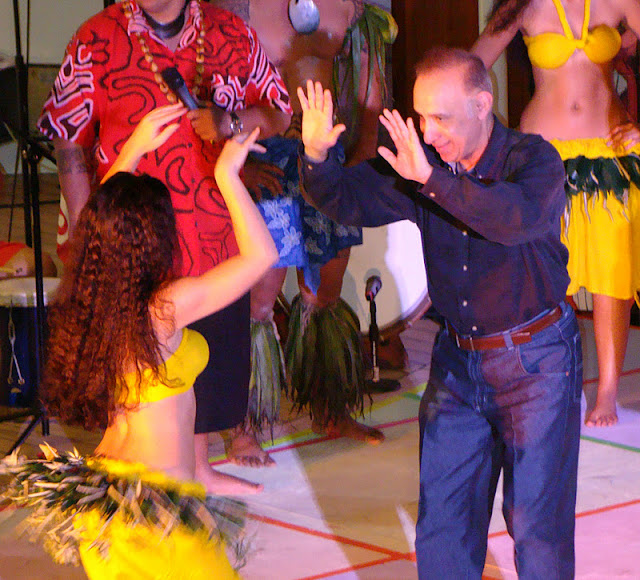 And my buddy, Jamshed got reluctantly pulled up on the stage. 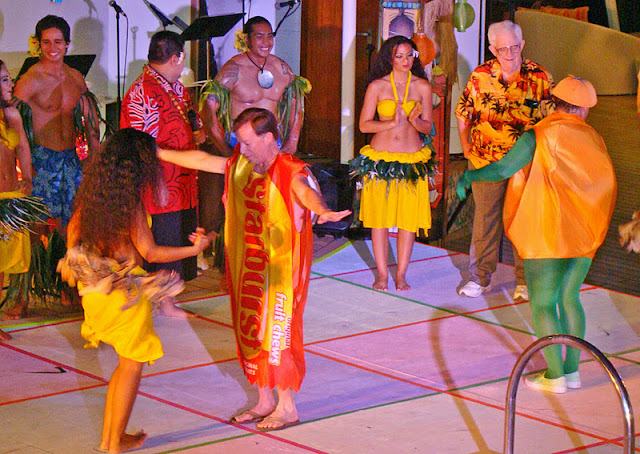 You'll notice David (the dancing gentleman from the opening night festivities in Crystal Cove) got to put his dancing skills to work again during tonight's show.
I went back to the cabin to work some more on the blog.  The Golden Princess took off half an hour before we did, with very loud Caribbean (?) music blaring from their open decks.  While we quietly pulled away from the pier a few minutes before midnight.  When you sail between a chain of islands, there is always a ‘rush’ of water in the middle of these channels.  As I was getting into bed, I could feel the rocking motion picking up.  Despite the nap, I’m pretty tired….so this should help the cause. 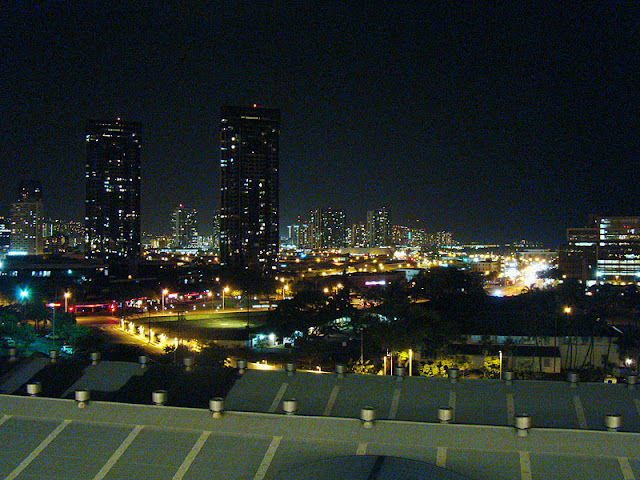 One last parting shot of Honolulu

Sadly it wasn't this couple! But what a small world it is, huh. Lovin' your pics too! I wish I had one of those faux coconut drinks {{{ strong }}}

Fabulous photos! The colors are so beautiful! By the way, did you see the Crystal press release today that the Bistro will be staying open until midnight starting later in the spring? And with a chocolate fountain no less! You have some wonderful sea days ahead.

I did see the press release. It used to bother me that they closed at 6. Sometimes I wanted a decaf capp. after dinner; & they used to not be as good in the main D.R. as they are now.

Too bad, the later hours won't apply during the W.C. It would be my favorite hangout.

Becky, we are loving your blog. We check in with you and Keith and live vicariously through you on these wonderful sectors. Thanks for posting such vivid and lovely photos. We appreciate you taking the time to put this together. Hope to sail with you one of these days.