I overslept a little this morning.  Barely had time for a quick shower; & I literally shoveled in the muesli before bridge class.  During Capt. Glenn’s morning report, he noted that it should be a beautifully sunny day, mid 80’s, with moderate seas.  We’re running on 5 engines today (21.5 knots).  He is anticipating high winds & rough (15’) seas late into the night.  He asked that everyone secure any possible loose, breakable objects in our cabins in preparation.  This should make for an exciting night onboard.  The bad thing is that during the night we cross the international date line.  So, at the stroke of midnight, we go from Monday night into Wednesday morning.  So, not fair that I lose a whole day of my cruise!


His quote for the day was….”Many people will walk in & out of your life.  But only true friends will leave footprints on your heart.”


Bridge was kinda like yesterday.  He let us all take turns being declarer; & tested our reasoning skills.  With sinus brain again today, I wasn’t exactly reasonable.  I think I took one step backward since yesterday’s lesson.


I made a quick dash down one deck & all the way forward to catch the rest of Bruce McGill’s lecture on understanding Shakespeare.  Of all the characters I’ve seen him play on TV & in the movies, seeing him recite Shakespeare seems so out of place.  Although he has had an illustrious stage career, I’ve never been exposed to it.  But he has a booming, commanding voice that is perfect for the stage. 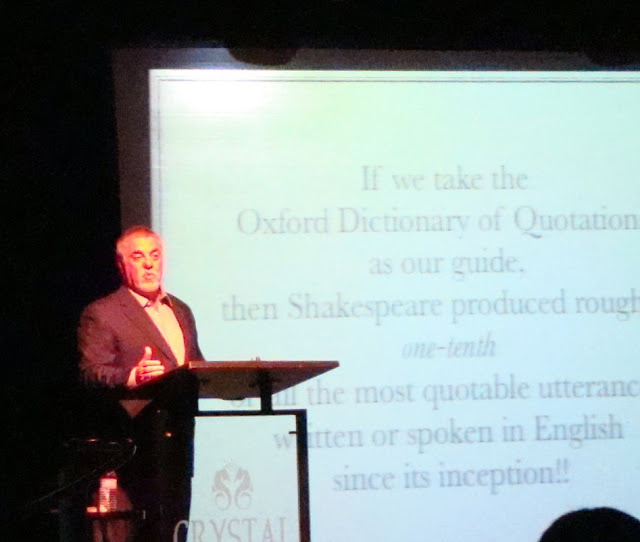 From there I went up top to the Palm Court for the “mid day-mid earth mixer”, a celebration if you will, of crossing the equator.  Those who have never done so are called ‘pollywogs’.  Some ships torture us neophytes with embarrassingly, silly stunts.  I was relieved that Crystal did not even draw attention to the ‘pollywogs’ in the crowd.  It was more fun & embarrassment of the entertainment staff. 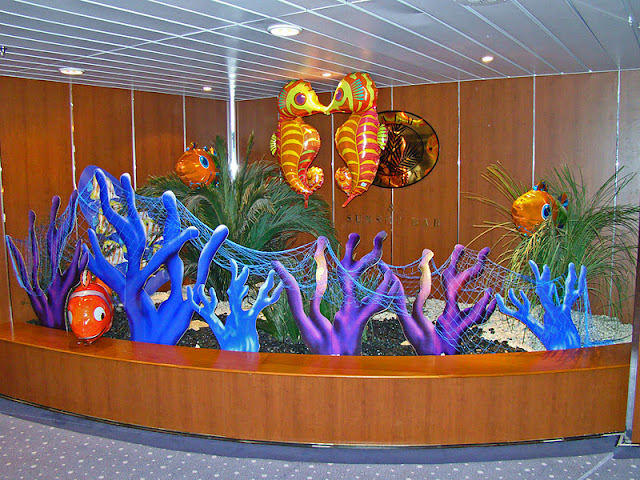 Complimentary bloody marys & mimosas for everyone.  The Galaxy Orchestra played as many danced.  King Neptune, his mermaid queen & his royal court presided.  Singer Karen Jeffreys performed a number; followed by Michael Harris singing ‘Way Beyond the Sea’ as Curtis & Beverly wowed us on the dance floor.  Captain Glenn came up to watch the spectacle; but did not speak. 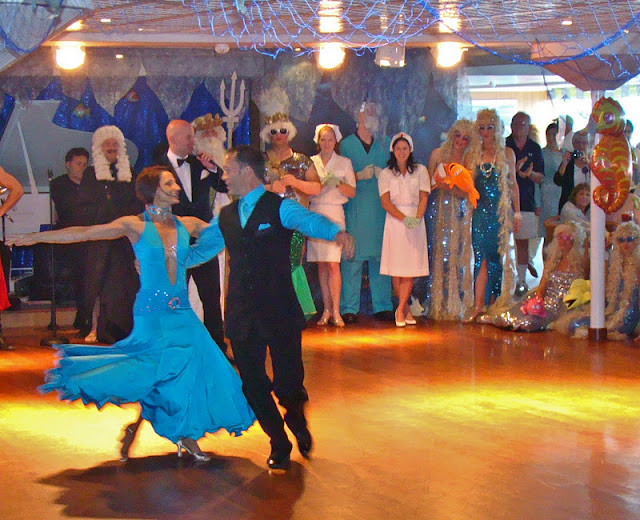 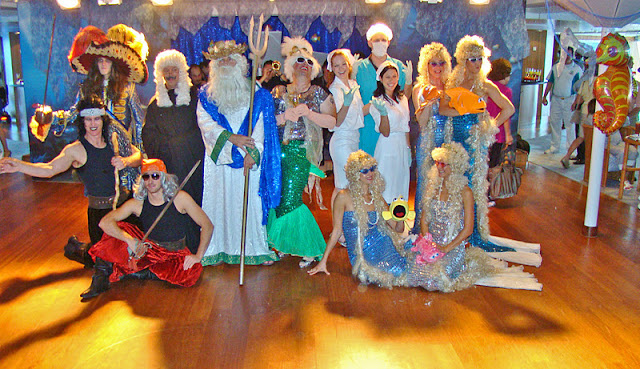 Afterwards, I had a chance to speak again with Bruce McGill & his lovely wife, Gloria.  They were nice enough to pose for this photo. 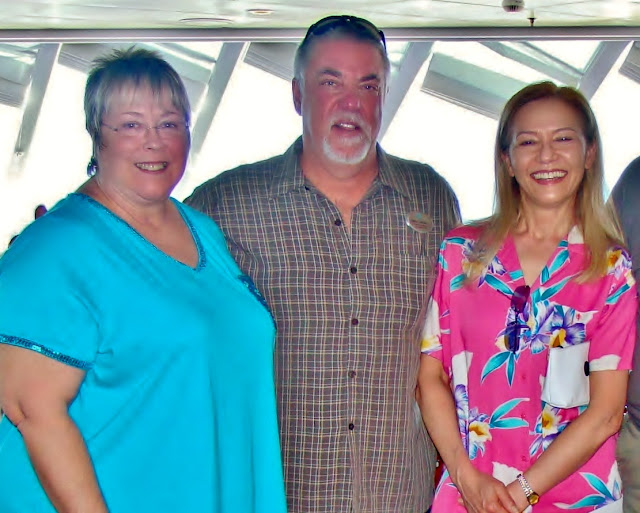 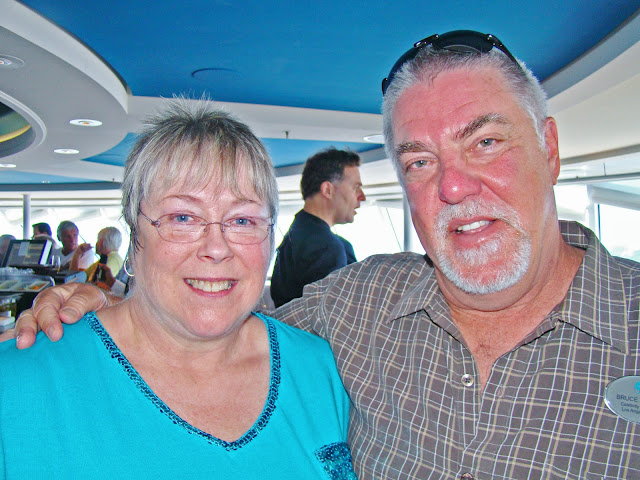 About 1, I went into the Lido for lunch.  I had a tuna melt; a grilled pork skewer; a taste of the fish, shrimp & mussels in white wine cream sauce; lots of hearts of palm; & some Nicaraguan vignorone salad (which consisted of cabbage, onion, tomato in lime vinaigrette, very tasty). 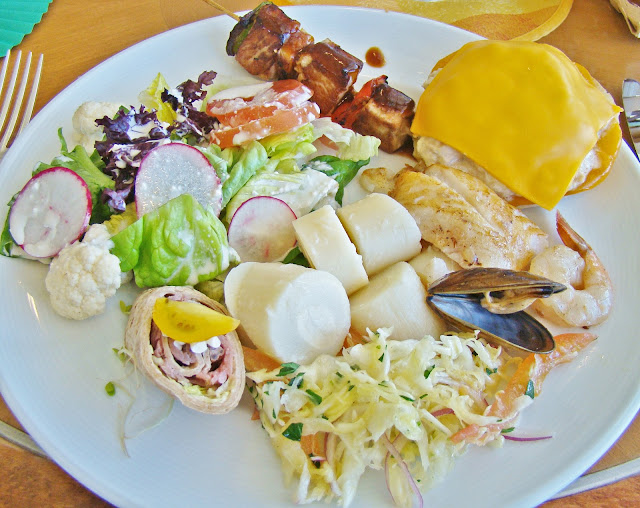 Che brought her plate over & chatted a bit.  She was in a big rush to get to a lecture.  And Elaine (Peggy’s friend, not my bridge partner) came & chatted a good while.  We had a nice deep conversation on topics ranging from spiritualism to India to comparing luxury cruising.  She’s a lovely woman; & I’m so glad to have been able to meet her through Peggy.


Back to the cabin about 2:30, where I started to work uploading yesterday’s blog (slowly).  During this time I also kept an ear on Dr. Bill Bendel’s lecture from earlier this morning on the mysteries of the universe.  Astronomy doesn’t necessarily pique my interest; but he was going to touch on the subject of the abrupt ending to the Mayan calendar on 12/21/12.  This is something I’ve had strong feelings about; & he has me now convince that it’s really just the end of one chapter & the start of a new one (similar to the concerns that were circulating prior to Y2K).  He assured us that it would be safe to go ahead & plan another Crystal cruise past this December.


I laid down to read a bit with my feet propped up.  And again, I fell asleep; only to be jolted awake at 6:25 by an announcement over the PA system (shipwide).  Now, this is something that just isn’t done onboard Crystal, so it had to be important.  It was Capt. Glenn wanting to remind us to batten down the hatches in our own cabins.  He has altered our course, heading more west instead of southwest hoping to go around some of these high winds.  But to be safe, I took all bottles, glassware, etc. from their perches & placed them on the floor.  I put the throw pillows around them to keep them from rolling around.  I’m actually looking forward to this bit of action.


I took some more sinus medicine; definitely staying in for the night.  I read a while on the sofa, until Liz brought my dinner around 8:20.  It was a good meal starting with a beautiful appetizer of poached lobster medallions with saffron braised fennel & lobster vinaigrette. 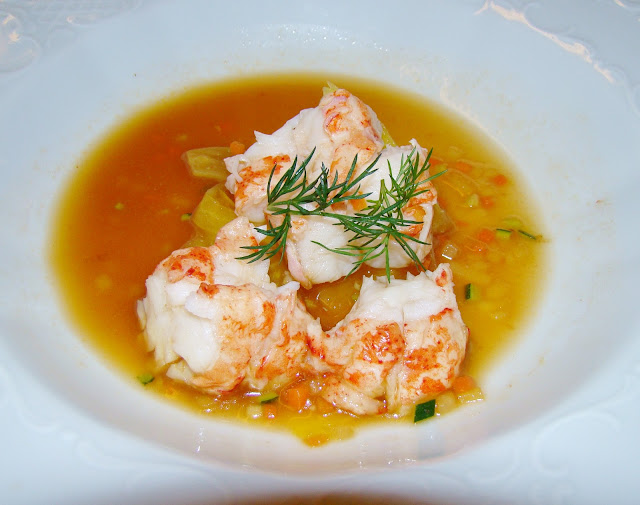 I ordered a mixed green salad with creamy sesame dressing; which I put away in the refrigerator in case I can’t sleep tonight.  I just didn’t have room for it during meal time. 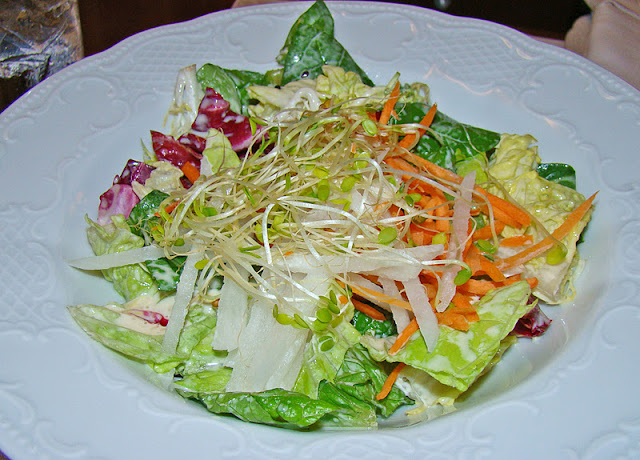 My main course was broiled fillet of cod that had a thin crust of (hash brown) potatoes, drizzled with a pommery-mustard sauce.  It came with some broccoflower; & I added a side of their fabulous mushroom risotto.  Delicious! 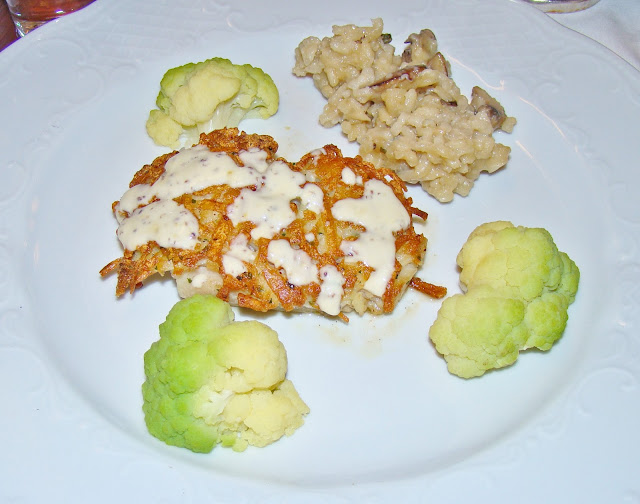 One of the desserts on the menu was new to me; so I ordered it.  It was called “Harlequin” which consisted of 3 different tiny desserts primarily of chocolate.  One was a small white chocolate mousse.  Another was a chocolate praline truffle.  In the middle was a small chocolate melt cake.  It was supposed to be served with vanilla ice cream.  I had asked for them to leave off the ice cream.  But it came with a small scoop in an iced compote on the side.  Knowing that the refrigerator wasn’t going to preserve the ice cream, I ate dessert first.  You know what they say……life’s short, eat dessert first!

After dessert, I ate the main course because it was supposed to be hot.  Then I went to the appetizer because it was small.  Therefore, there was no room for the salad.  Worst case scenario, I’ll have it for breakfast in the morning.  Wednesday morning, that is.

It’s now 10:30; & you can feel the seas have picked up.  Hopefully, I’ll get this uploaded before turning in.  I’d like to finish my trashy chick novel before going to sleep.