January 26th
Back at sea

I slept mah-vulously last night; & today I feel like a new person.  It’s sort of like an exorcism took place during the night; & (hopefully) my “evil twin” has left my body.  The ship was really rocking all night long; & I really had to hang on in the shower this morning.  When Capt. Glenn came on the air at 9 am, he reported that we’re flooring it (using 5 of our 6 engines); & will need to keep a speed of around 21-22 knots to stay on schedule for Noumea, New Caledonia 8 days from now.  He predicted great weather, 79 degrees, 26 knot winds from the SE.  Yet, off & on throughout the morning, we kept going in & out of rain showers!  His thought for the day:  “We cannot solve all our problems with the same thinking that created them”. 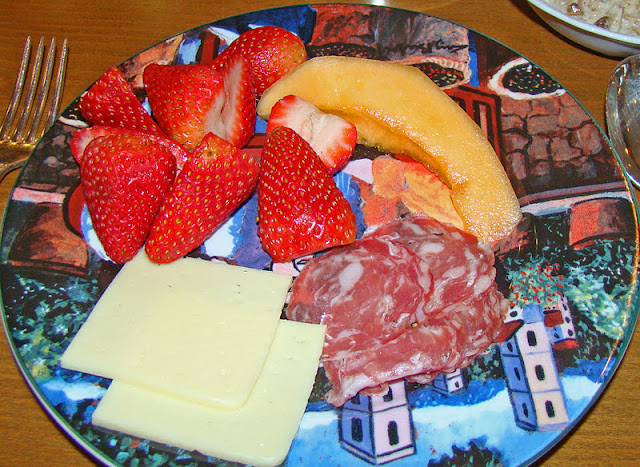 I realized on the elevator that I had forgotten my coffee mug; but I was running too late to go back for it.  So, I changed my routine this morning…..juice with breakfast in the Bistro.  I had another bowl of that awesome muesli, fruit, cheese & cold cuts. 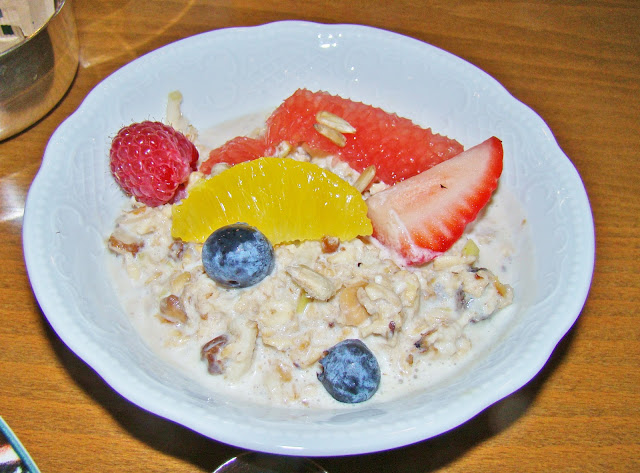 I ran into Keith & Anne Marie coming out of the Bistro.  (How ironic that Keith was unbable to sleep last night; while I slept great for the first time. ) Everybody’s running off to various events around the ship.  A lot of days it seems like there’s too much to do on sea days.  Since you can’t be in 2 places at once, sacrifices have to be made.  I attended my 10 am bridge class (#6).  We’re beginning to delve into strategy; & I didn’t grasp some of it.  Rachel & Eddie assure me that with plenty of repetition this won’t be a problem for me.  We shall soon see. 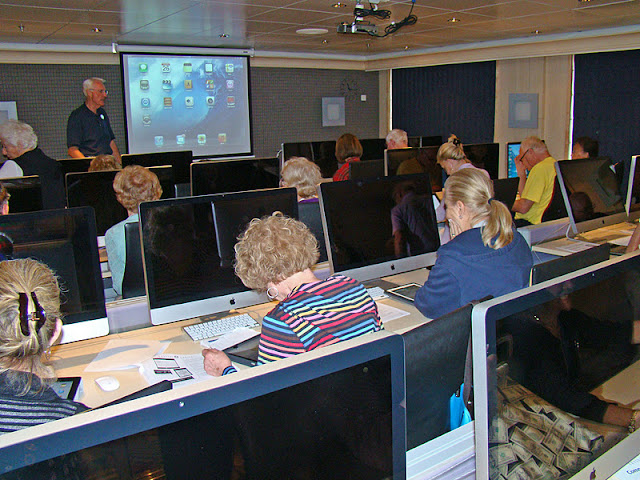 After that ended, I went straight to the Computer University where I was going to sit in on my first ‘Mac’ class.  I wanted to learn a little more about them in case I decide to someday switch over from a PC.  Today’s class was a little redundant for me, since it was an introduction to the iPad. (Seems like EVERYBODY came onboard with one; or else got one as a gift for being a full W.C. passenger.)  I am glad to know a little more about what it can do; but I can see that it would not be my preference for a portable computing device.  I have to have a REAL keyboard.  I’ll stick with my baby netbook for short trips.  The next lessons in the series will show more of how the Mac OS differs from Windows.  Getting to try out a Mac will help me make an informed decision when I need to replace my current PC down the road. 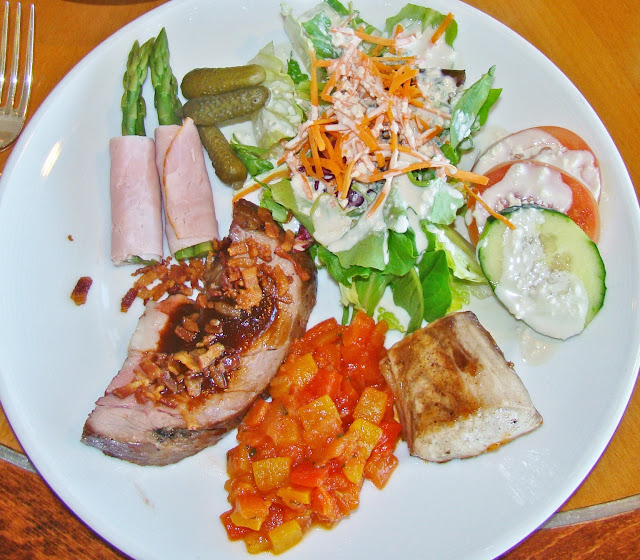 I went down to check the D.R. lunch menu; & decided that I’d just as soon go up a little later & eat in the Lido.  So, it was back to the cabin to check the internet.  It’s working at ‘lightning speed’ this afternoon; & I wanted to take full advantage of that.  So, I was able to upload blogs & photos for 2 days; & upload several more photos to Facebook.  I barely made it to the Lido before they closed at 1:30.  I had a mixed salad, a few asparagus wrapped in ham, a piece of garlic & thyme rubbed veal shoulder that was topped with rosemary sauce & fried pancetta chips.   The veal was fabulous.   I also tried another new fish I’d never heard of, Hawaiian Hebi which was served along with a ragout of chilies, tomato & bell peppers.  This was another very meaty fish; which cut more like beef; as it did not flake.  It was very good; but I’m unable to compare it to any other type of fish I’ve had before.  The ragout was very tasty; & complimented the fish nicely.  (Upon further research, I've now learned that Hebi is the Hawaiian name for the shortbilled spearfish....who knew???) 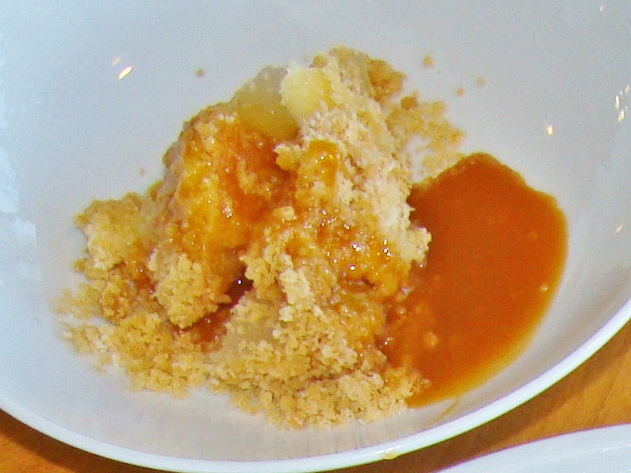 I had a little pear crisp with caramel sauce for dessert.  The pear crisp part was barely sweet, which surprised me.  But the caramel on top made it just sweet enough to feel like dessert.  I enjoyed it.


Back to homework on the computer.  I’m still learning to use the photoshop software on my photos.  The possibilities are endless.  Our next class is on cloning, which should be loads of fun.  But I have a very serious dilemma tomorrow as my photoshop class is at the same time as bridge class.  I will check with the instructors to see if they will repeat this same photoshop series on the next segment.  I feel like I should continue with the bridge lessons since continuity is going to be vital if I’m to learn this game.


I had a scheduling conflict with Gen. Brady’s lecture this morning; so I watched it replayed on TV this evening.  The subject was “What it means to be an American”.  Even though the topic was misleading, the content was inspirational & patriotic.  He mostly gave examples of pride, courage, sacrifice, determination of Americans he has served & worked with.  But he did point out that people of the U.S. are known to be the most generous nation in the world when it comes to aid to other countries in times of war or natural disaster.  We may have our faults; but for that, we should be proud. 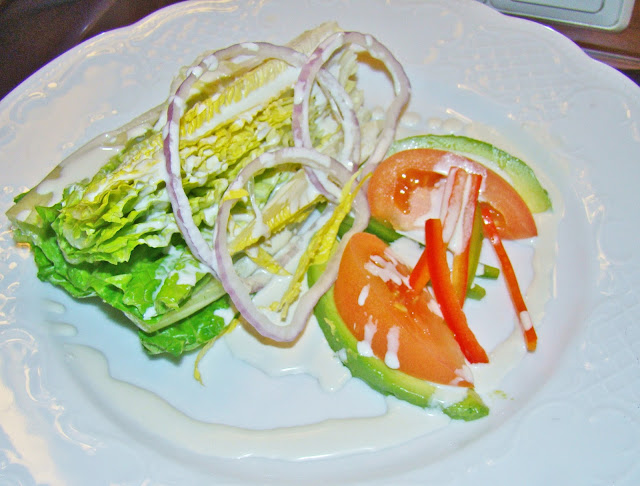 Trying desperately NOT to take a nap, I tried reading a while.  About 7, I decided to check out tonight’s D.R. menu (as weak as it was).  The dress code is semi-(in)formal tonight; & I knew I was not about to go to that much trouble for wiener schnitzel, sirloin steak or lamb curry.  Nothing really sounded appealing to me; & I even contemplated ordering from the regular room service menu.  In retrospect, I should have; or at least gone up for casual outdoor dining at Tastes.  What I ended up with was a fairly decent hearts of romaine lettuce salad with tomatoes, sweet peppers, avocado & red onions. 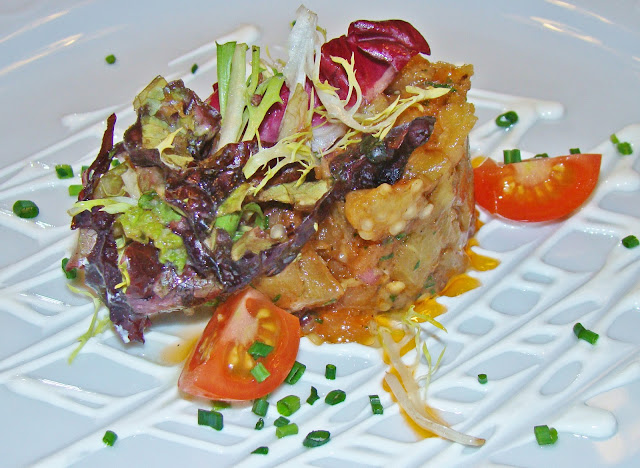 I had an appetizer that was listed as salad of roasted eggplant with baby lettuce & chive crème fraiche.  It was presented beautifully & tasted quite good. 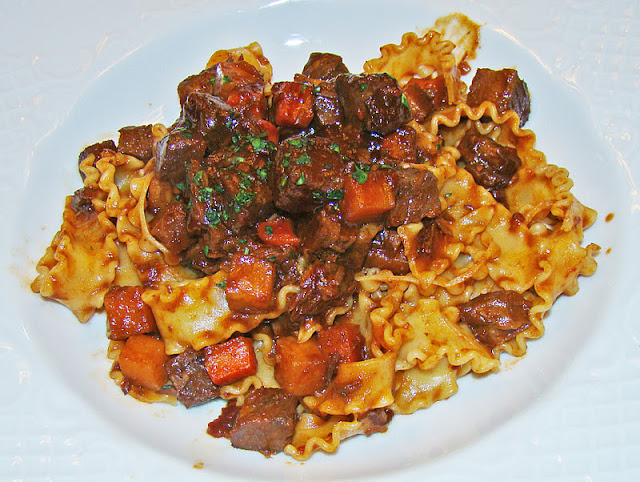 I took a gamble on the pasta special as my main course; mafaldine pasta with beef short rib & root vegetable ragout (have you noticed a lot ragout lately?).  Now, I had no idea what mafaldine pasta was; but I thought it couldn’t be that bad, after all it’s pasta.  Well, mafaldine noodles looks very similar to a lasagna noodle; but only about 1” wide & about a foot long!  The beef short rib was cut in cubes; & other than carrots, I couldn’t tell you what vegetables were in the ragout.  I’m shocked to be saying this; but it tasted very much like something mass produced/industrial style.  It wasn’t bad; it was filling.  My fault; I just made poor choices.  Enough said.


And since it was a slow ‘news’ day, I thought I’d add a little note about my wonderful stewardess Liz (formerly known as Elizabeth).  Someone emailed to ask if my cabin was piled up with dirty dishes every morning; & what Liz thought about my dining in most of the time.  Good questions…….#1  Since I despise seeing trays of food sitting outside the door, I don’t put mine out there when I’m through.   Instead, I rinse every plate & utensil under hot water in the sink & stack them nice & neat (on the dining table) for her to pick up the next morning.  No stinky, caked on food on the dishes.  #2 Even though Liz does break her evening routine by rolling a trolley of food down to my room, she does not have to do any type of turn down or other evening service in my cabin.  She refills my ice bucket; says good night & leaves.  She’s in & out a lot quicker because she does not have to do the evening cabin service for me.  She felt guilty at first about omitting this part of her job; but she’s getting more comfortable with this arrangement.  I made sure her supervisor knew that these were my wishes; & that she was not in any way, neglecting her duties.  I would never settle in & demand someone to go out of there way EVERY SINGLE DAY (without meeting them halfway in whatever way I could).  On the other hand, this is Crystal Cruise Lines; & they would have enthusiastically delivered this type of service (in my humble non-suite accommodations) without even batting an eyelash.  This is a classic example of why Crystal has been voted the world’s best large ship cruise line for the last……well almost since it’s inception 20 years ago. 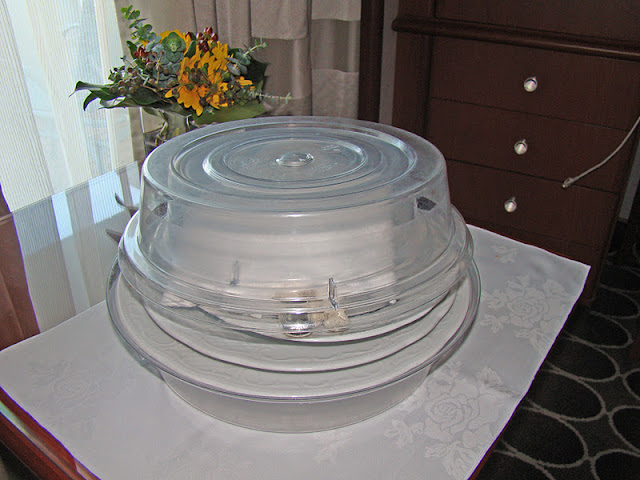 So here we are, 10 pm; & I’m caught up with my work….unbelievable!  If the internet cooperates, I shall be on & off in a flash with this blog entry.  Then I’m crawling into bed with a book……something new….light.  In other words, my typical cruise literature………….chick lit.  Nite y’all.

Great to hear abut your trip every day....does it not seem like "work" to you? You do a great job of explaining everything and those picture are so excellent. I love you, girl. Kathy Clements

Sometimes it does, Kathy. Once we get further along in our journey & the ports start to come fast & furious, it's almost impossible to keep up. There's so much to say; hundreds of photos daily to edit during a full day of touring.

This will be a challenge for me, since I've never been at sea this long, nor toured as much as I have planned to on this trip. I fully expect to fall hopelessly behind close to the end. And I'll probably end up having to finish the blog after I get home from the copious amount of notes I take every day. Since I can't remember squat, I write it all down. There will probably be a dramatic difference in my writings in the next 4-6 weeks. Less detail; & more facts (which some might find an improvement).

This is a labor of love for myself; later in life when I won't be able to travel for whatever reason. The details & photos will put me back in 'the moment' & preserve those memories forever. If anyone should find my stories interesting along the way, then all the better. I'm happy to share the journey; & glad that you are joining in on the fun. Love you back....

Really enjoying following along via the blog. You're looking great and sound well rested now - hopefully the sleeping better will continue for the remainder of the voyage. Love your comment about the guests out on the aft deck however, I'd say it was the Brits out there who were the ones without an accent!!!!!xxx