I had a fairly restful night’s sleep.  I brought my travel size sound machine for a little soothing ‘white noise’.  And the ship started rocking a bit more about 4 am, which helped a lot.  I got up at 9 when I heard the Capt. start his morning report from outside the cabin door.  It’s going to be a mostly cloudy day, about 62 degrees.  We’re running about 21 knots on 4 of our 6 engines trying to stay a little ahead of schedule for our arrival in Honolulu on Mon.  Capt. Glenn’s thought for today….”The destination is never a place; it’s a new way of seeing things”.
Before I go any further, for those who haven’t heard this before, another thing I LOVE about Crystal is the absence of announcements over the PA system.  Capt. Glenn speaks from the bridge every morning at 9 am; & that’s all you’ll ever hear.

I went down to the Bistro where Dennis fixed me my first decaf, low fat cappuccino of this trip.  I really don’t gave a hoot about coffee in the simplest form; but I tend to OD on capp’s while I’m on Crystal ships.  I couldn’t remember what time they usually bring out those tiny, orgasmic Portuguese custard tartlets; but I really wanted one before my 10 am beginner’s bridge class.  Dennis said it would be a few more minutes; but in true Crystal style, he went back to their secret hiding place & brought me out one to go.  Dennis rocks! 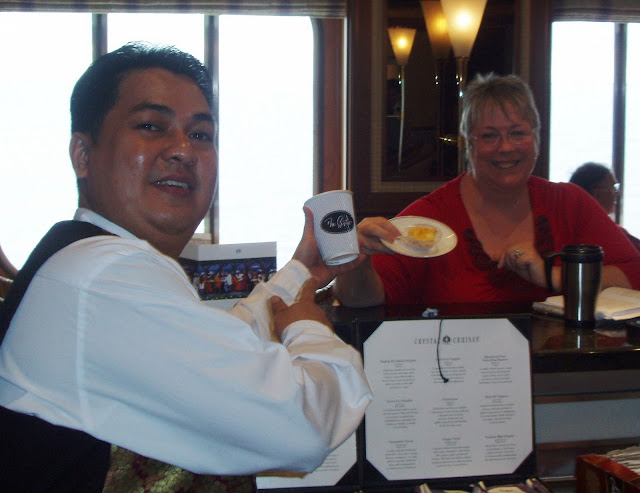 Having had a few lessons onboard before, I was very pleasantly surprised by the teaching method of this couple from the U.K. (Rachel & Eddie Hardy).  There’s so much bridge being played on this segment, it was very strange attending classes in the Silk Road Restaurant instead of the Bridge Lounge. 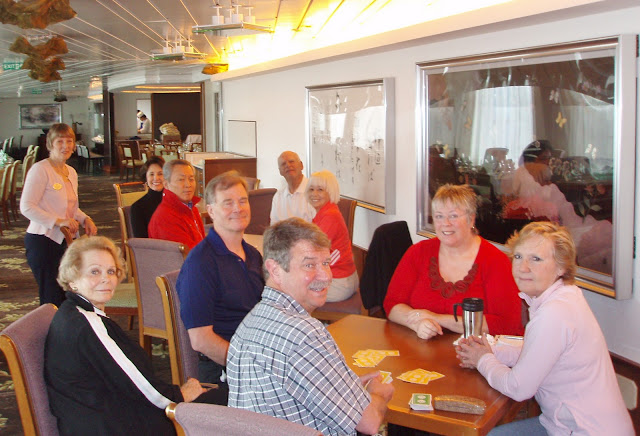 Two years ago, we only had time for 5 classes (only on sea days); & the bulk of that time was spent learning technical terms & rules.  Rachel & Eddie got us started right away by playing a game of ‘whist’ (a simpler British variation of bridge, very ‘rummy-like’).  After playing as individuals, we started playing as partners.  This allowed me to watch & count the cards that had been played instead of worrying about the hard fast rules.  During this time, they would offer suggestions on which cards to play & why.  It’s very much ‘Bridge for Dummies’; & they’re speaking my language.  The hour went by way too fast.

Back to the Bistro for more capp. & to see if there were any tartlets left (they always go like hot cakes).  But dear Dennis had stashed away one more for me.  I was a little late, but stuck my head in the Galaxy Lounge to hear some of the lecture by Rob Warne (Diplomat & Senior Foreign Service Officer @ the U.S. State Department).  Crystal offers workshops/lectures onboard through their ‘Crystal Visions Enrichment Program’, given by prominent speakers who are leaders in their respective fields.  There will be a treasure trove of speakers featured on these voyages.  Mr. Warne’s topic was the wonders of the Pacific Ocean.  Not realizing that the Pacific makes up nearly 50% of our planet’s water system, he did outline how ‘we’ have exploited & damaged it through oil & mineral mining & over-fishing. 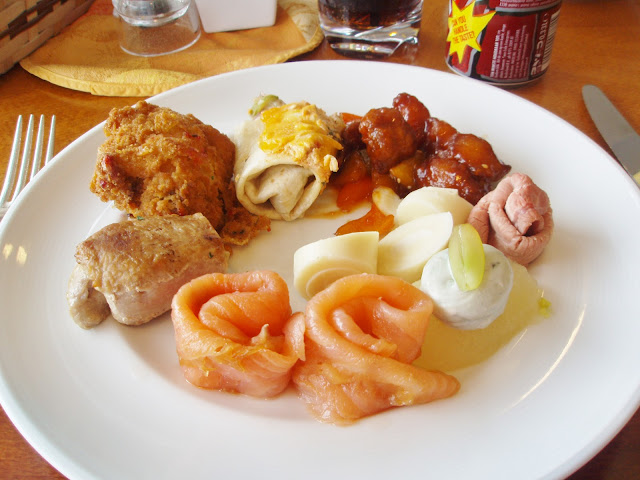 The D.R. menu didn’t wow me; so I ventured up to the Lido Restaurant to peruse the buffet.  Ed went off in search of a Dr. Pepper; & I made friends with Demi, a new to me waiter from Manila.  I took a sampling of several things (I crave) hearts of palm; roast beef & salmon rosettes; sweet & sour chicken; bleu cheese mousse on a wedge of pear; braised veal wrapped around slivers of pickle, vegetable sticks & mustard with a white wine sauce (don’t knock it till you’ve tried it, it was delicious).  I had carried my lap top up there, planning to do some work; but I found no regular electrical plugs.  I must be losing my mind, cause I could have sworn that in the past, I’ve been able to plug in along the wall by the windows.  But they are 2 prong European plugs (for which I have a converter to solve this problem in the future).

After lunch I went back to deck 8 to check out our little ‘private’ aft deck area.  It’s not really private; but very few people would even think of going there (except for the rare shuffle board player).  It will be a nice alternative to my verandah once the weather gets warmer. 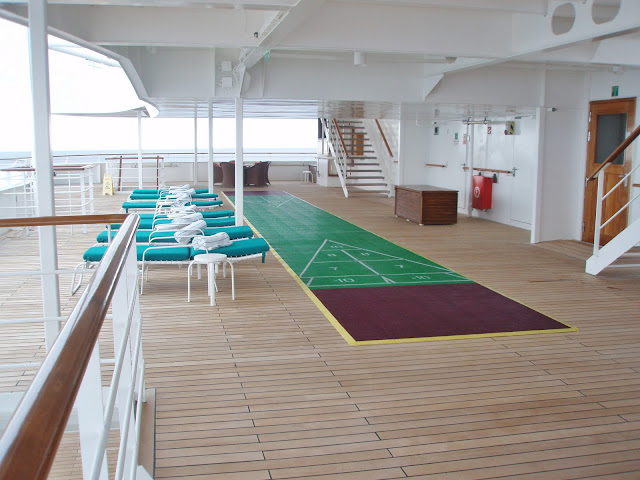 I went back to the cabin to finish ‘nesting’.  I was shocked at how much ‘stuff’ I had brought that needed to be stowed in the bathroom.  I’ve got just about as much stuff here as I do in my bathroom at home.  I’m prepared for every possible personal or medical emergency.  Since I’ve never been at sea for so long, it felt very strange taking over every nook & cranny with my ‘stuff’.  When it comes time to go home, it’ll feel like packing for a move!  BTW, I wanted to point out how this ‘obsessive-compulsive’ stays organized at sea……magnetic walls…. 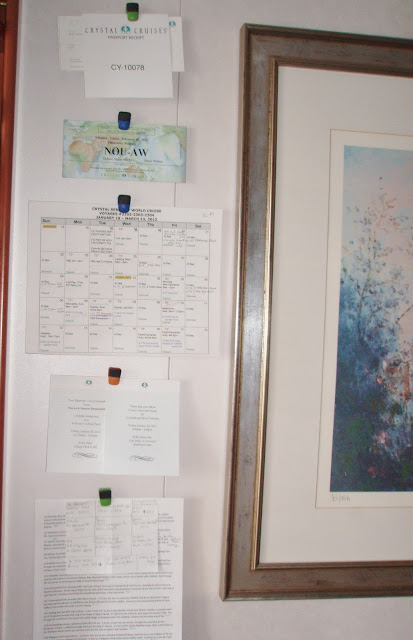 And also point out, the carpet in my cabin.  The Serenity had a massive refit a few months back.  The cabins look beautiful; but the carpet freaks me out a little.  The pattern gives the impression that the carpet is not tacked down completely, like it’s got ‘bumps’ in it.  Do y’all see that?  Or is it just my tri-focals??? 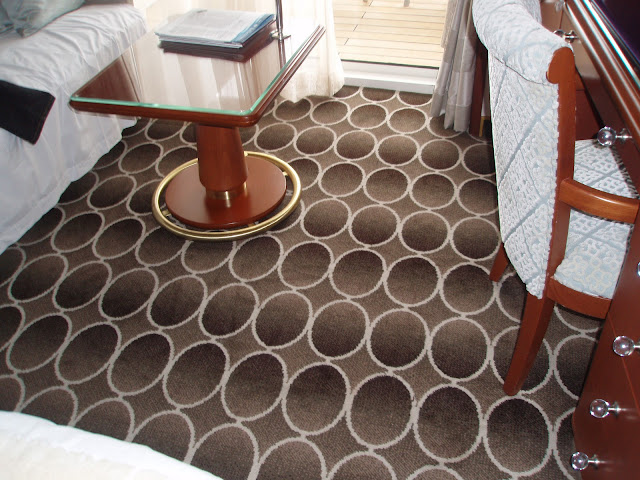 I could feel a nap coming on; so I got under the covers.  Next thing I knew it was 6:30.  Tonight was the Captain’s Welcome Reception & Dinner; but I felt the need to ‘chill’ a little more.  It dawned on me that the Miami/LA game was on TNT tonight; & I knew it was going to be jammies instead of an evening gown.  I wasn’t paying attention to the time difference, so I turned on the game at the start of the 3rd quarter. 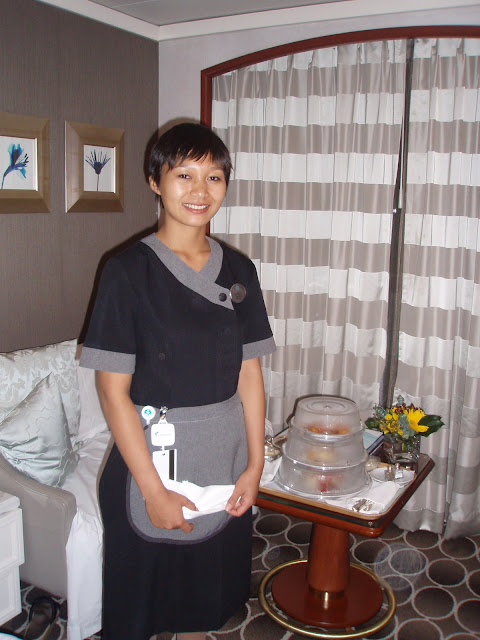 I consulted my menus; & gave Elizabeth my dinner order.  She was back about 8 pm & set up my ‘table’.  Tonight I chose a puff pastry basket appetizer filled with a ragout of chicken, mushrooms & asparagus. 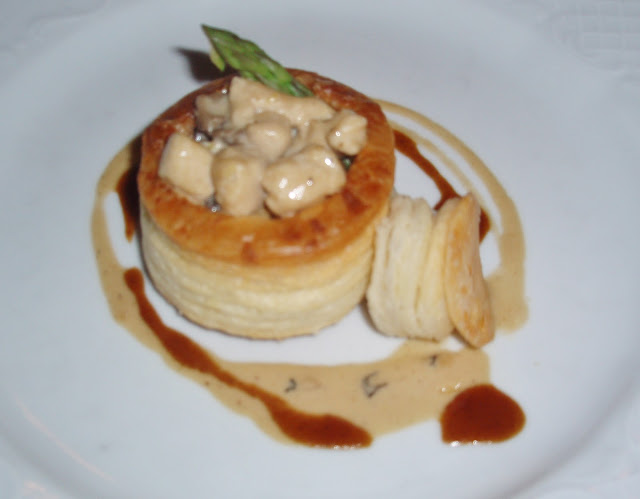 Next was an appetizer portion of the pasta special; garganelli with plum tomatoes, artichokes, zucchini, sweet garlic & buffalo mozzarella.  It was to die for.  I may have to make a special request for that again in the D.R. some night. 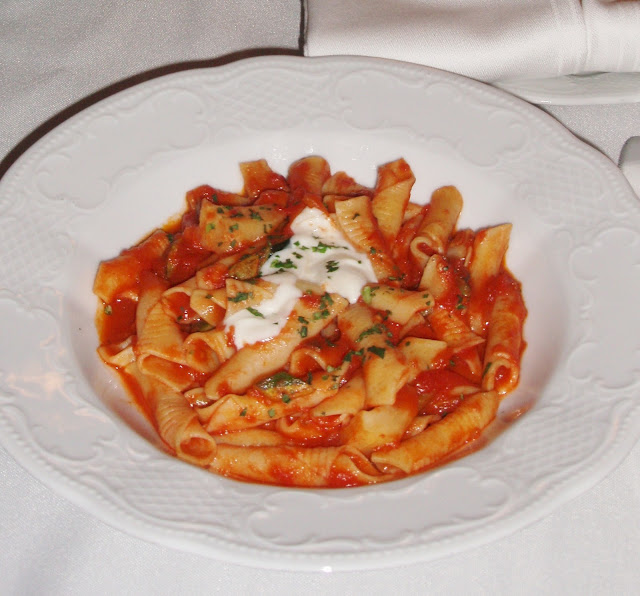 My entrée was the broiled Maine lobster served on a bed of leek-truffle risotto accompanied by asparagus spears & a side order of honey braised cabbage.  It amazes me how they manage to cook the lobster to perfection (never chewy).  And this version of risotto has always been one of my absolute favorites.  I usually enjoy the braised cabbage; but for some reason it was a little off tonight. 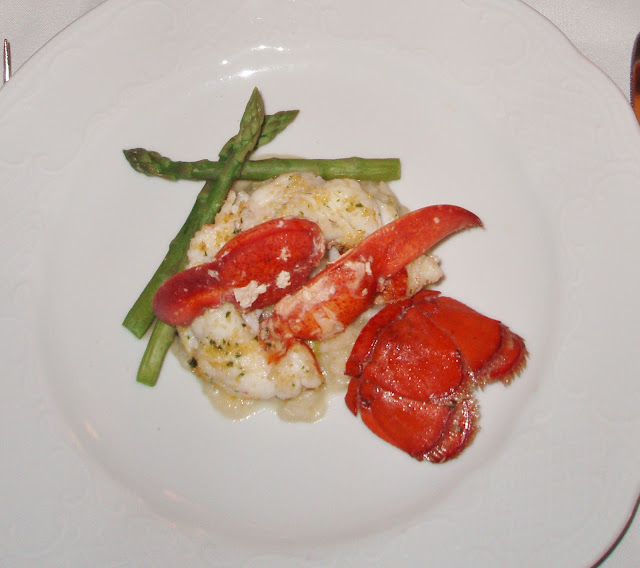 Elizabeth rang the doorbell during my dinner (it’s going to take a lot of getting used to the sound of that new doorbell system instead of the normal knocking) to deliver a small floral arrangement.  This was a gift from the couple who are acting as escorts on behalf of the Signature Travel Network consortium (of which Preferred Travel in Naples is a member).  What a nice thing to do for this lowly 3 segment passenger!


After the blow out basketball game, I worked on the photos & the blog for another 3½ hrs & at the same time caught most of another lecture that was being rerun on TV.  Maritime Historian for the Ministry of New Zealand, Dr. Gavin McLean, spoke on the history of sailing the South Seas & later the impact that air travel had on it.  I found it quite interesting; more so since I was in my jammies curled up on the sofa.


We got to turn our clocks back another hour tonight.  So, it was really only 1:30 am when I turned out the light.  Sucking on a cough drop; hoping to prevent that tickle & praying that I don’t chock to death on it!
Posted by Unknown at 2:29 AM

Becky, it's wonderful to be at sea with you once again. Your writing is as crisp and real as ever. I hope you have a great time. Please say hi to the Lido guys from "Mr. Charles". I saw so many familiar crew faces in that sailaway pix you took; thanks for that! Best, Chuck-

I'm with you on the carpet however, I wear varifocals too - it was obviously chosen by someone who doesn't !!!

Thoroughly enjoying your blog and intensely envious of all those weeks onboard you will have to enjoy..