My new wake up ritual seems to coincide with Capt. Glenn’s 9 am report from the bridge.  I suppose this is just as good as any other start of a new day.  He’s got a soothing voice, charming Norwegian accent & a subtle wit about him.  He hoped that we all had a wonderful sleep; & he assured us that there would be no additional charge for that extra hour of sleep last night.  We continue to run about 20 knots on 4 of our 6 engines (although, we could easily make Honolulu on schedule if we coasted at 18 knots).  But, as he says frequently, “I like to keep a little extra in the pocket”.  He expects the swells to increase; & be partly to mostly cloudy.  It’s a little warmer now, low 70’s.  Capt. Glenn’s quote for the day…..”A smile is an inexpensive way to improve your looks.”
I was out the door about 9:30; stopped in the Bistro for my morning capp; & then headed to bridge class at 10.  We switched up the tables today; & I sat with Elaine, Louise & Kim (a sweet, soft spoken gentleman from Korea).  And for those of you who want to put a face with a name, they were in the photo of the bridge group yesterday.  Elaine is the lady in the blue jacket that observed my table yesterday.  Louise is the blonde in the red blouse.  She lives in Honolulu; & will make a quick trip home while we’re docked there to check on her 4-legged kids & pick up the rest of her luggage.  Kim is in the red jacket.


I continue to sing the praises of our bridge instructors, Rachel & Eddie Hardy.  They’re easing us into what could otherwise be a very complicated game.  Yesterday we actually played a few hands; still haven’t learned about bidding.  Although I would love to get a group together to try & practice a little in the afternoons, they advised us to wait a few more days. 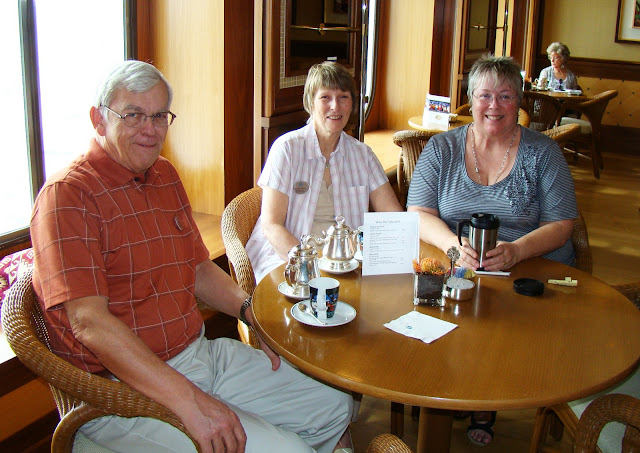 
I went back to the Bistro for another capp, where I ran into Pauline.  For those of you who followed my Canal transit a few years ago, Pauline was a dining companion at the Chief Engineer’s table.  Pauline is this lovely Asian woman from CA, who has sailed on hundreds of Crystal cruises.  She’s quiet, very unassuming, witty & a joy to be around.  I had heard she was on for the whole WC; but I had not laid eyes on her yet.  Rachel & Eddie invited me to sit & chat with them over our coffees.  They are an adorable couple; & I enjoyed learning about their history with bridge & teaching on the high seas.

Since I missed breakfast, I was getting hungry towards noon.  I went down to peruse the main D.R. menu; & ran into Keith & Anne Marie sitting in the Crystal Cove with their iPads.  BTW, I learned today that everyone on the full WC found a ‘special gift’ in their cabins last night……an iPad.  Very generous trinket to bring home compliments of Crystal Cruise Lines!  (For the record, the ‘gift’ I found on my bed this afternoon was a baseball cap.) 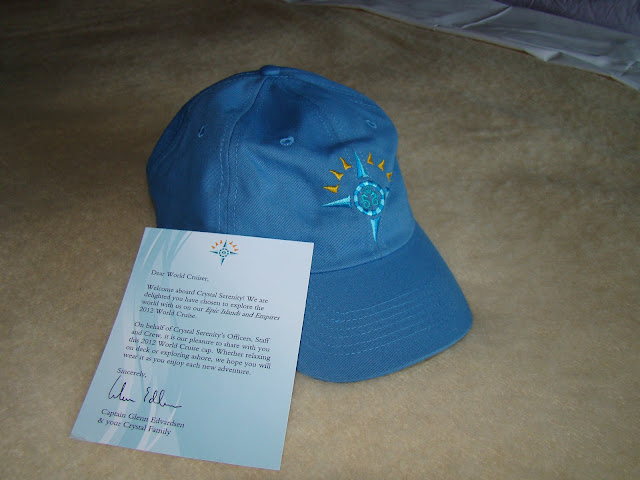 The luncheon menu really appealed to me.  So, I was escorted to a 2-top by the window & enjoyed a pleasant lunch that started with a lovely cocktail glass of hearts of palm, tomato & endive drizzled with lime yogurt dressing.  Very tasty & beautifully presented.

This was followed by one of the most orgasmic cream soups I’ve ever tasted…..roasted garlic with sour dough croutons.

I don’t know what came over me; but I asked for a ½ order of the pasta special.  It was spaghetti carbonara.  I’m sure I’ve had this here before; but did not remember it being this delicious.  There were a lot if crispy strings of pancetta; & my taste buds were doing the ‘happy dance’.  I was very tempted to ask for more; but I will refrain until it’s on the menu again on another segment. 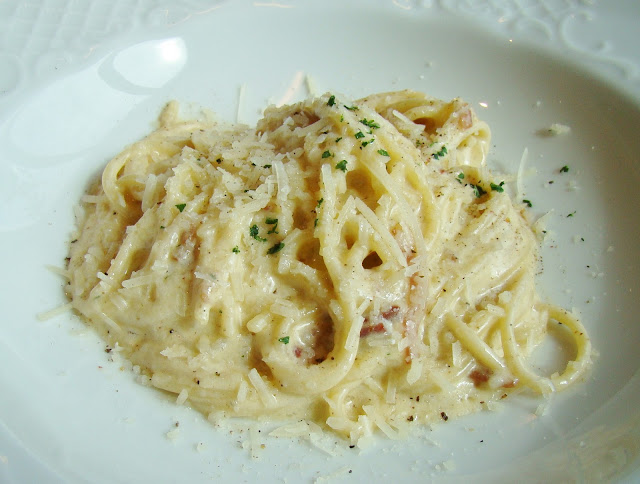 As I was leaving the D.R. I ran into 2 old (waiter) friends.  Petar, who was the asst. waiter at the Chief Engineer’s table 2 years ago, has been promoted to sr. waiter.  And some of you may remember my charming Turkish ‘friend’ from several cruises.  Although I’ve never been assigned to his table, we’ve chatted at great length about my love of Istanbul.  And to be honest, I had never remembered his name….but it's Kamel.  Yes, he still bows & kisses your hand.


I watched today’s celebrity lecture on TV back in the cabin.  Harm de Blij (who is a Professor of Geology & with the National Geographic Society) gave a talk on geographic literacy & national security.  (That's pronounced de blay, BTW.)  That may sound like 2 totally unrelated topics; but they are not.  He points out that the average person is actually geographically illiterate since so little emphasis is put on the subject in modern education.  But knowing where countries are located, who their neighbors are, how their traditions & religious beliefs differ gives us a better understanding of how ‘neighborly conflicts’ can become worldwide issues.  Other countries join in, taking sides; & some of us are sitting there wondering what has this got to do with us?  Not that I tend to think such things in my day-to-day life; but part of the travel experience is to step outside the box, & look at the world through different eyes.


I took a short ‘nap-ette’; & then got up & worked on the blog a little while.  I had 2 cocktail invitations this afternoon; & would like to have gone to both.  The couple that is acting as hosts for the Signature Travel Network was having one; also the meet & mingle gathering for those of us who participate in the Cruise Critic message boards.  I couldn’t miss the opportunity to put faces with ‘screen names’ of people I chat with online regularly. 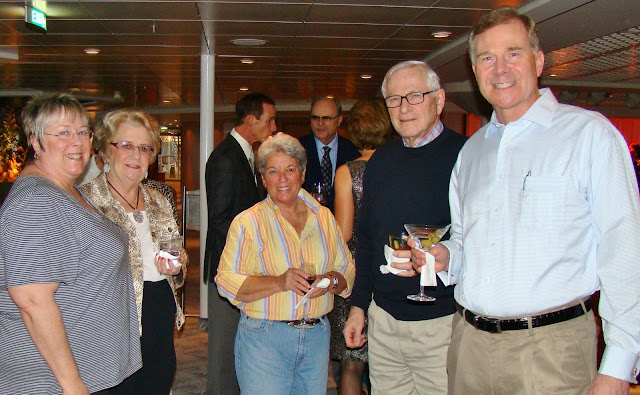 Peggy, Keith & Anne Marie, Dwight (from bridge class) were in attendance.  And I finally got to see Celeste & Bill, from the Canada/NE cruise on Symphony last Oct.  I met so many new people.  Had a nice chat with Pat & Ray (SnowBirdCruiser) & Che (Seakitty).  The Capt., Cruise Director, Hotel Mgr., & Jacque Brown (Crystal Society Hostess) joined.  I had a chance to talk with Capt. Glenn about his daily quotes; & passed on a few of my own to him.  I broke down & had a (rather tall) mojito.  It was delicious; but with the alcohol & all the moving around I was very ‘warm’. 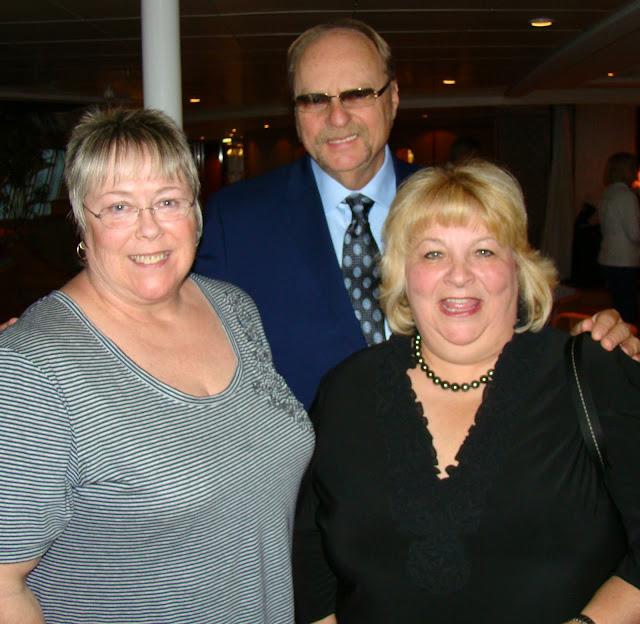 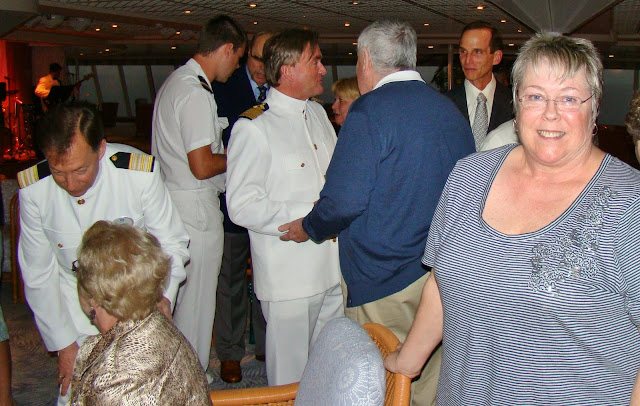 I also had a brief sighting of the infamous, Mama Lee, who lives onboard Serenity.  She was dancing with one of the gentlemen hosts.  Now that woman could be my idol.  I tried to get a photo; but I could only get the back of her head.  Maybe another time.

Back in the cabin, I watched another celebrity lecture that took place this afternoon.  Retired Maj. Gen. Pat Brady gave a very interesting talk on leadership, courage & humility.  He shared interesting & humorous stories about the great leaders he has known.  I paged Elizabeth to give her my dinner order; & got in a quick shower before she arrived about 8:30. 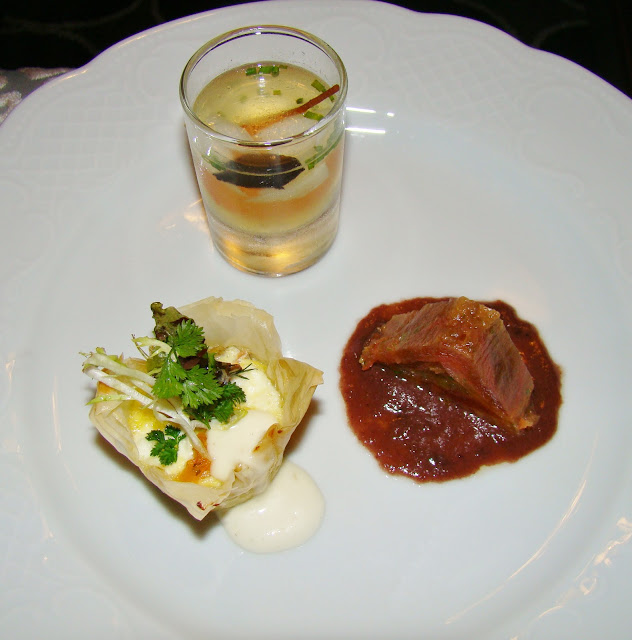 I tried the ‘tasting appetizer’, which tonight consisted of 3 tiny samples of recipes using heirloom tomatoes.  My favorite turned out to be a tiny tartlet of warm goat cheese, tomato & herbs.  I also really enjoyed the little ‘shot glass’ of (yellow) tomato consommé with truffled asparagus salad.  I couldn’t quite get into the taste of the pressed tomato terrine sitting on a bed of olive emulsion. 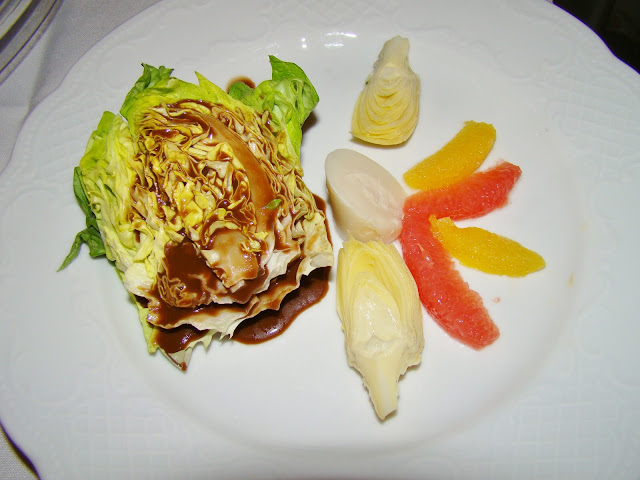 Next I had a fabulous salad of Boston lettuce with artichoke hearts, hearts of palm, & orange/grapefruit segments; served with balsamic vinaigrette dressing. 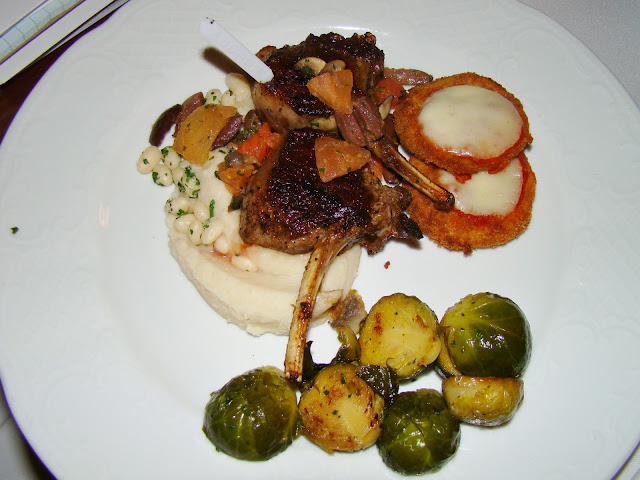 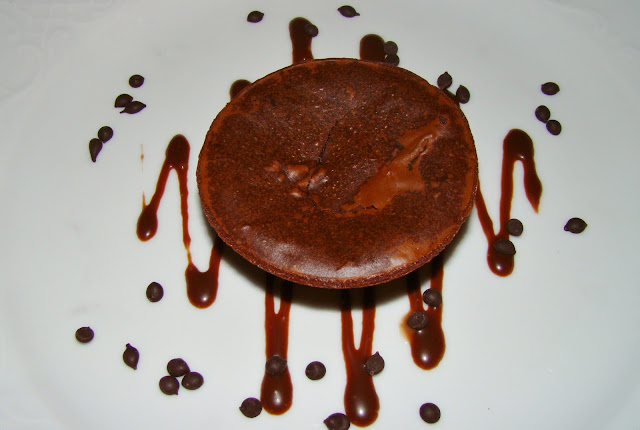 I ordered dessert, chocolate dove cake.  I ordered it sans the vanilla ice cream since it was coming to the cabin.  Unfortunately, I had no room for it; but did give it a quick taste.  The outer part is reminiscent of a brownie; but the inside is more like a dense chocolate mousse.  It was drizzled with chocolate sauce & tiny chocolate chips.  I will have to save it for breakfast in the morning.

The internet was finally working reliably; so I was able to upload Thurs. blog & photos.  About this time there was a noticeable pitch to the seas; & it made me very sleepy.  I’m kinda pooped after such a big day.  Lights out about 11:30.

I am a cruise critic member. You will find my avatar and screen name under 01 Cobra. I subscribed to your thread on cc, but it is nicer reading your blog. (yes...I wanted to see the pictures without clicking) I am so lazy...
I just wanted to say, I am truly enjoying your blog. When I read those who were on the entire WC got ipads and then I saw the picture of the baseball cap you received I laughed out loud. OK, well maybe that wasn't really funny, but I read it that way. Thank you for sharing your experience. This is great fun to read!
My best to you for the rest of your journey!