A little after 7AM I was aware that the bed was rolling gently (finally, I feel like I’m at sea). It became even more urgent to make a trip to the bathroom. I climbed back in bed determined to stay there until my breakfast came. A little later I could hear the Capt’s. voice over the PA out in the hallway talking about the sea conditions (mod-7.5’); temp 86; winds 20-30 knots, sea temp 84. Next thing I knew, Catherine was knocking at the door at 9:25. She wasn’t really talkative this morning, probably because there is a crew lifeboat drill at 10; & she’s scurrying so as not to get behind. (For the benefit of those who haven’t sailed on Crystal…..you won’t be disturbed w/ frivolous announcements over the PA system. The capt. makes his bridge report every morning at 9 am. And, of course, Louis sings at sailaway; but that’s all you’ll hear. Quiet, just the way we like it.) 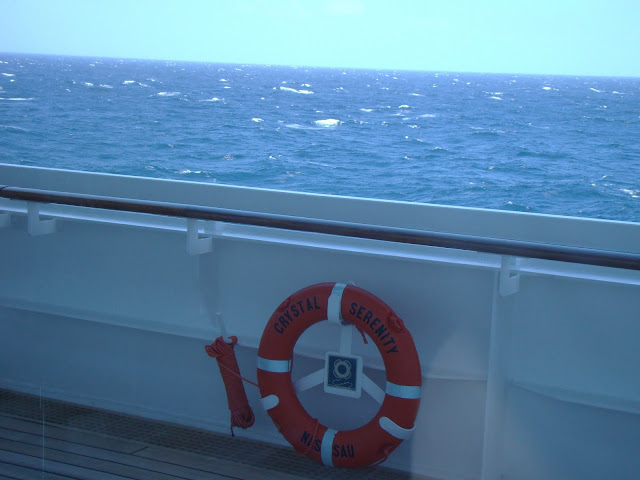 After my cherry yogurt, granola, raisins & V-8 juice & a quick check of the HL news, I was out & about. Picked up my capp. & took a seat in the Bistro to watch the decorators string more Christmas lights around the railings of Crystal Cove. It’s an ongoing process which probably won’t be completed until after we turn around in Caldera & are heading back to MIA. That looks like a job I’d enjoy having. Board ship w/ multiple pallets of boxes of decorations & spend 22 days putting them up. And I’d suppose, take a week or more in Jan. to come back onboard & take them all down. Wonder where I can go to put in my application??? I also watched flying fish outside the window & occasionally doing something on the computer. By 12:45, I figured the buffet lunch crowd might have thinned out a bit.

Today there was an American themed buffet lunch around the indoor pool on Lido deck. Just about every conceivable American food that I know of could be found there. You would think I’d have learned from past experience that some things look better than they taste. But it didn’t stop me from piling my plate(s)…..yes I said plates….full. And when you see the photo, don’t gasp. Max took my plate & bottled water & set me up at a table in the a/c area at the back of the Lido restaurant (which was closed). As I was piling on plate #2, XXX came up & took that plate back to the table. These guys don’t even flinch when they see the amount of food we take away; but Lord knows what they must be thinking. (You can undoubtedly feed 10 children in their home countries w/ what was on my plates. Disgusting!) 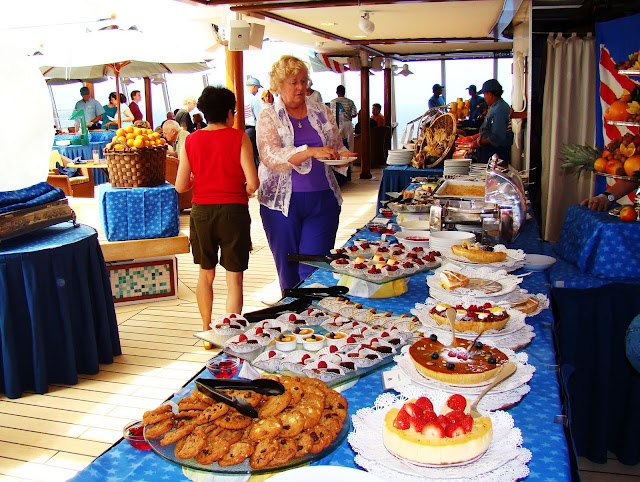 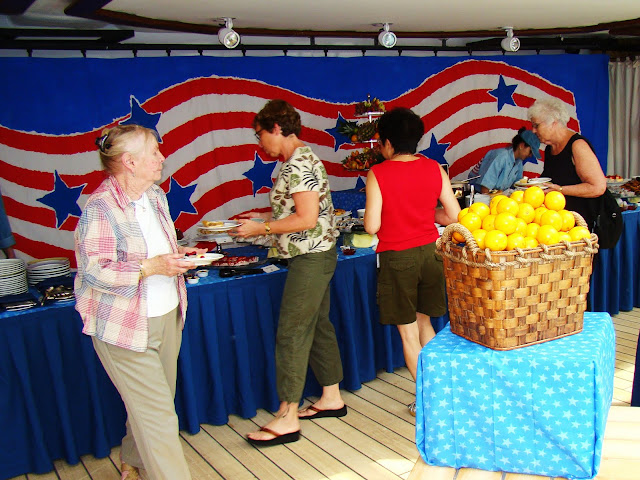 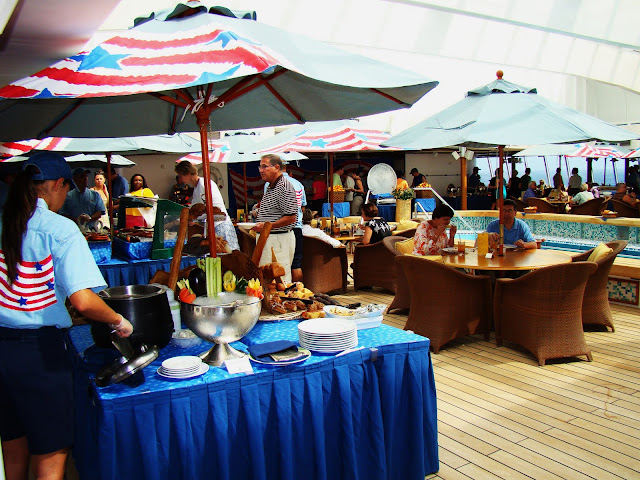 The BBQ ribs were excellent, as was the prime rib, tiny spicy chicken turnover, a cold fried chicken nugget salad w/ sun dried tomato vinaigrette. The fried shrimp w/ spicy creole tartar sauce, the onion rings, the corned beef & cabbage & roasted vegetables were all quite good. What made the biggest impression on me (something that I had never seen before) was okra fritters. Man, oh man, could I have eaten the whole steam table full? They had taken chunks of boiled okra, some breading or corn meal & spices & made little balls; deep fried them. Outstanding! I tasted a few desserts: flan & crème brulee (what’s so American about these?). I had something that was supposed to be marshmallow smores; but it turned out to be fudge (yuck). I DID NOT eat everything on my plate; but I was totally miserable when I left the table. 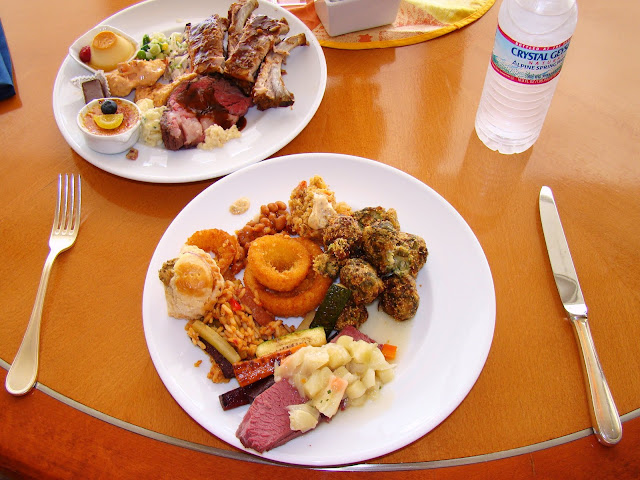 I went to the compt. ctr. to borrow the card reader & transfer my photos from the camera to my laptop. While I was doing that, I got on Facebook; & my friend, Joyce, (who I met onboard Serenity several years ago) was online; & she sent me an IM. We chatted back & forth (as if internet time was free); & I joked w/ her that if she went to Crystal’s website & looked on the live camera feed, she could see me in the computer ctr. She did. It took a while for me to position myself where she could see me (up close & personal); & I felt so foolish as everyone sitting at the computers knew that I was trying to be “on camera”. Some stared in disgust; some admitted that they had sat w/in camera range & waived to folks back home. Supposedly she made a copy of the screen so I could see me too.

Before I forget, tomorrow as you know, we transit through the many locks of the Panama Canal. Crystal Cruise Lines has a live webcam from several different locations available on their website. And according to today’s onboard newsletter (Reflections), the Canal Zone also has a few web cameras. I will supply links to both of these websites so that you could (if you have nothing else better to do) watch us enter the locks & “ride the tide” up & down. The magnitude of the project did not register w/ me until I actually went through the canal 21 years ago. I have done it a few times since then; & it boggles the mind at how it all works. Our transit will start around 6:30 am & be completed somewhere around 5 pm. We will be running on the approximate schedule listed below. Times listed are for the EST zone:

http://www.crystalcruises.com/home.aspx
(Click on “the Crystal experience”, then “live views”, click on “Serenity” tab & then choose either the bridge cam, port or starboard cams.)


NOW BACK TO YOUR REGULARLY SCHEDULED PROGRAMMING: I went back to the cabin & did some more blog work & edited photos. It’s the last formal night of this cruise; the Capt’s. Farewell Cocktail Party & Dinner. I did not go up for the cocktail party (such a waste of free booze); but dressed & went straight to the dining room. The Chief was dining w/ us again tonight; & everyone looked quite lovely. He treated us to 2 Italian wines. All I can tell you was that one was white (Soave); & it was pretty good to my novice palate. The other was a red (of unknown origin, other than Italian); & it was another one of those bold “pucker up” flavors. Food & Wine Magazine will definitely NOT be asking me to write a review.

The dinner menu was excellent; & I tried some new things. For an appetizer I had a chicken liver parfait w/ black truffles. It’s rather complicated to describe. It came out in a martini-type stemmed glass. In the bottom was a gelatin made from port wine w/ tiny pieces of diced pear (pear confit). On top of that was a small perfectly rounded scoop of creamy chicken liver pate, garnished w/ a raspberry & a small sprig of an (?) herb. It was almost too pretty to eat. I did not want to spread it on the toasted brioche that came w/ it; so I ate it right from the glass w/ a small fork. It was so rich, extremely “earthy” tasting (for lack of a better word). I also had a cup of cream of asparagus soup that was outstanding. As has been the case in the past, the pasta dish appealed to me; so I had an appetizer portion of that. It was angel hair tossed w/ truffled pesto. It was supposed to have navy beans, new potatoes & bay scallops in the main course version; but I saw no signs of it in my small portion. That was okay; because it was very good even w/o it. For my main course, I had them make a plate of the featured vegetables. When I saw white asparagus, sauterne (wine) braised cabbage & sweet corn fritters; I knew I had to have it all. The plate came out w/ a pile of the cabbage, all ten of the (quarter-sized) fritters surrounding the cabbage. Then the asparagus were lined up on the outside of the fritters, just like the rays of the sun. (I hope y’all can visualize what I’m saying, because it was a masterpiece of presentation.) It was excellent.

Even though they had Baked Alaska on the menu, almost everyone at the table chose the “chocolate melting moments”. This is small round of chocolate cake w/ a warm melted chocolate center (kinda like lava cake, only much better). It was sitting in a pool of “tea cream Anglaise” (actually a vanilla flavored sauce) w/ a tiny dollop of vanilla ice cream. Orgasmic doesn’t even begin to describe this.

During the last part of the meal, the Chief & I were in deep conversation about operating budgets, how differently NYK (a Japanese shipping conglomerate, which happens to be Crystal’s parent company) runs this company, & the pros & cons of adding a 3rd ship to their fleet. He seemed quite interested to hear how the “baby boomer” market views the future of Crystal. And I was quoting almost verbatim from feedback I read on the Cruise Critic message boards. I was telling him about a new posting on the boards asking “us” where would we like Crystal to take us. Are we becoming bored w/ the same old, same old itineraries year after year? How can they please the middle aged market w/o alienating the “old guard” Crystal Society? Can they handle 3 ships even though they aren’t consistently able to fill the 2 they have? When he left the table, he said this discussion would be continued. I assumed that I would be assigned a different table on the next voyage; but he seems to think it will remain as is. Harriet, Seymour, Joan & I are all staying onboard; w/ only David & daughter, Kate leaving us in Costa Rica. I might prefer to get to know new people. And as much as I have enjoyed the company of Ioannis, I would feel less obligated to dine in the main DR if I weren’t at an officer’s table. I like to eat al fresco up by the pool at “Tastes” on the evenings that they serve out there. And I would go w/o reservations to Silk Road & eat right at the sushi bar some nights. Guess I’ll just have to wait & see where Mario wants to put me next week. I’m sure it will be an adventure, whatever it turns out to be. Throughout the day the ship has continued to roll gently in the moderate seas. And we are moving pretty fast; there was a lot of distance to cover between Aruba & the entrance to the canal. So, I’m counting on a wonderful night’s sleep on this “less than wonderful” mattress.
Posted by Unknown at 11:50 PM

Please ask about getting an 'egg crate' overlay for your bed. Chris swears by them!