My therapeutic massage was turning into big time muscle soreness before I went to sleep last night. So, I took some Advil PM & read until after 3am. When I finally went to sleep, I slept like a rock. It wasn’t until 10:30 that I was ready to turn on the TV & check the bridge cam to see what kind of day it was going to be. I could tell it was mostly cloudy; & it looked like there was intermittent rain. When I opened the drapes I was taken aback by this wall of white metal that was staring back at me. There docked on our starboard side was the behemoth, Carnival Victory. Wow, is she big! They’re probably over there staring at us, thinking “look how small the Serenity is”. And I’m thinkin’, “wow, that thing is big & UGLY” (well, not really….no ship can truly be called “ugly”)! Size doesn’t really matter; it’s what you’re packin’ that really counts. (Did I just say that?) 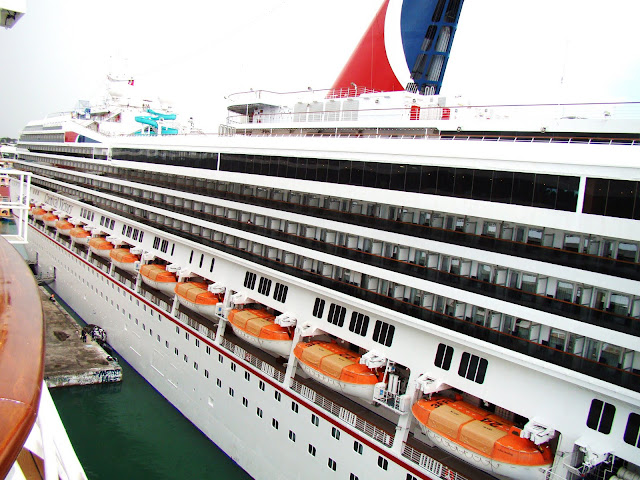 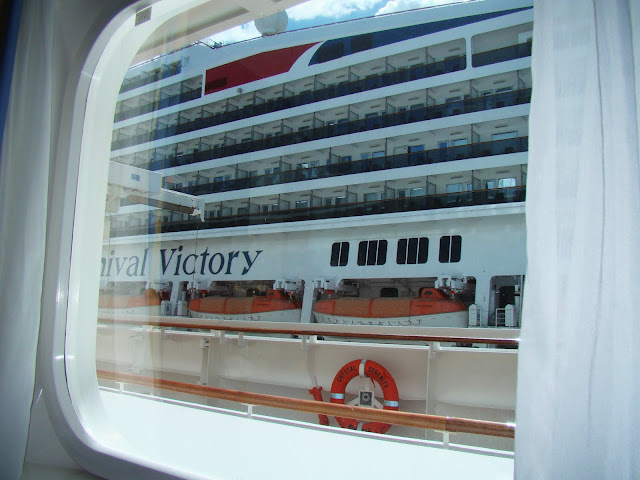 It’s amazing how easily I can plop the wig on; because I’m just dreading having to wash my hair & stand in front of the mirror w/ a blow dryer & round brush. I really hate that. So, w/ minimal effort, I can be out the door in no time. It doesn’t matter how haggard you look or what color your hair is (today), the Lido deck guys still know who you are & what you need. I got my capp. at the Bistro; & stepped outside to survey the landscape. For some reason St. John’s doesn’t look familiar to me. I know I’ve been here several times because I remember one year (decades ago), Pat & I taxied out to Buccaneer’s Cove & pigged out on lobster on the beach. Butter dripping down our elbows (ahhhh, memories of mis-spent youth). I can only imagine how crowded it is “in town” w/ both ships in. As you might guess, I’m not setting foot out there. Since I saw on HLN that it’s snowing in parts of the country that barely know what snow is, I shouldn’t complain about the fact that it’s HOT & extremely HUMID.

I parked myself up by the Neptune Pool (indoor); & the guys appear from everywhere (not because I’m some “sweet young thing”, it’s because that’s what they do). One brings bottled water & glass of ice. Another brings a napkin for my lap. Two more want to know what they can get me. Two others want to see my new baby laptop (Acer Aspire One 11.5”). Now maybe you understand why I spent the first part of the cruise in my cabin. Because if you really want to be left alone, that’s the only place where you can hide. It was in between “late riser’s breakfast” & “lunch” time. So, I had plenty of time to figure out which meal I was going to start my day with. After looking at the buffet menu, I knew I wanted to taste a little of everything. So, I moved indoors to the a/c where I was positioned under a wireless router booster. Before long, Ritchie appeared wanting to help me choose my lunch. He took my tray & walked beside me down the buffet line; got me a glass of tea & set up my table. I tasted some delicious items: thyme marinated veal from the carvery w/ a vanilla enhanced demi glace, Thai basil chicken w/ roasted cashews & Caribbean pepperpot stew which had meat, shrimp & plantains. The beef brisket w/ braised cabbage was pretty good; but I was expecting spicy “corned” beef (& it was not). The turkey scaloppini was okay w/ some sautéed spinach. I had the pasta station guy whip up a few bites of spaghetti w/ some onion, garlic, tomato & olive oil. It was divine. It sounds like a lot of food; but actually it didn’t even fill up a full plate. I played on the computer a little while; & then packed up & moved over by Scoops about 3pm. I HAD to get my ice cream dessert. Christian is so funny; when he serves me, it’s like a covert mission. He waits til no other passengers are around; & then he stoops down w/ his back to me & gets my lychee sherbet from its secret hiding place. All the intrigue makes it taste even that much better. I read out there for a while until the noise level picked up. It was raining again; & more passengers were coming back onboard. I went forward to the Palm Court (observation lounge) to take a few photos through the windows. We were pointed facing town & that was as close as I was going to get for taking picture. (Sorry, Sandra, I guess you’ll just have to come down here & see how pretty Antigua is for yourself.) 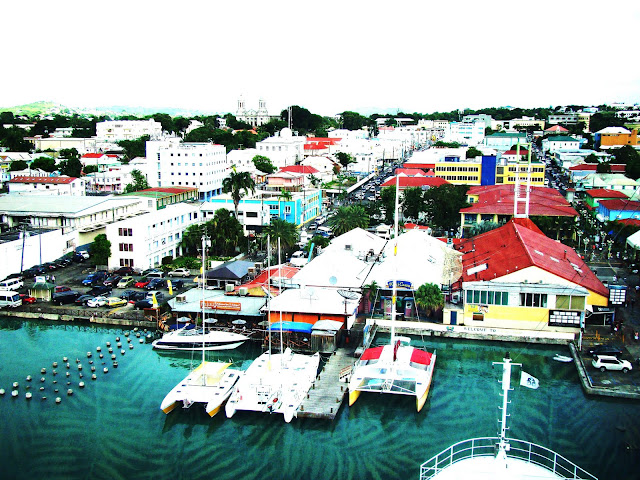 A few days ago I received an invitation to a cocktail reception in the “captain’s quarters”. Several times through a cruise, the captains often have get togethers for groups of passengers in either their ward room or their private quarters. I think it’s partly a matter of random draw; or in our case, maybe because we were assigned the Chief Engineer’s table in the DR. Since I’m not really a drinker, I’d have been just as happy skipping it. But it is an honor to be asked; & I didn’t want to seem ungrateful. So, I was forced to dress & go out for the evening. I finally broke down & washed my hair. The planets must all have been in perfect alignment because my hair turned out really good. It was poufy; & I used so much hair spray it was like wearing a shellac helmet! I almost felt naked w/o the wig. 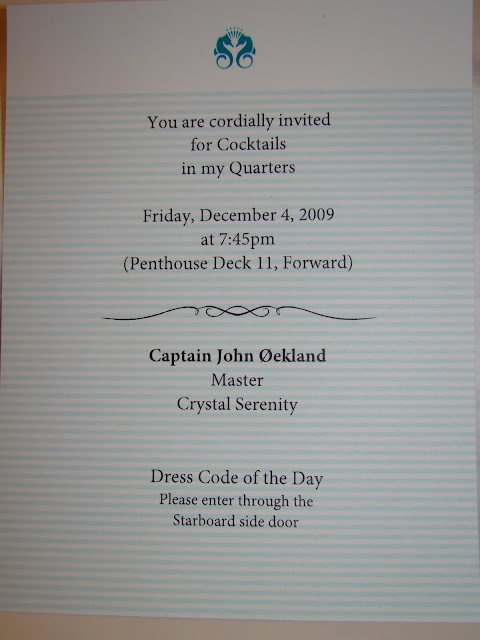 The cocktail party was LOUD; & the drinks were large & strong. There were probably 40 people. Since I hadn’t mentioned the invitation at the table, I was unaware that everyone at the table was invited. I thought, what the hell, order a drink; so I asked for a cocojito. The waiter came back later to tell me that they didn’t have any Coco Lopez up there; but they would gladly go down & get some. I said that wasn’t necessary; I’d take a plain mojito. I was feeling pretty happy before I got half of it down. They were floating around w/ hors d’ oeuvres; & I desperately needed something to soak up the alcohol. All they had was caviar; & I don’t partake. So, I proceeded to get comfortably numb. The ship’s photographer was snapping away; so there may be photos available later.

Soon it was time to file down to the dining room – six decks down, from all the way forward to all the way aft. I was ravenously hungry by now. I had a simply divine lobster strudel for an appetizer. Flaky layers of pastry, chunks of lobster & veggies drizzled w/ a gorgeous cream sauce. I was very tempted to order a larger portion as a main course. I also had an appetizer portion of rigatoni w/ prosciutto, asparagus & tomatoes in a light lemon sauce sprinkled w/ toasted pine nuts. That was fabulous; & I thought about ordering more of that for my main course. But I ended up w/ a king crab cake w/ a sweet salsa on the side. I wish I’d had my camera; because the presentation was beautiful. The perfectly round crab cake was “framed” by little triangular shaped roasted vegetables in various colors. There were yellow & red bell peppers, red beets & white potatoes all cut into thin slices, perfectly uniform in shape forming a sunburst formation around the crab cake. I guess you just had to be there…..or maybe it was the alcohol. I just thought it was so cute. I had the willpower to skip dessert. That is until Boris told us that the Head Waiter was making bananas
foster. That’s all it took. It wasn’t until they put it before me that I remembered Crystal has a strange interpretation of BF. In the past, they’ve added CHOCOLATE SYRUP. Whoever heard of such a thing? Well, they’ve made tremendous strides….chocolate shavings of top of the ice cream, which is only slightly more acceptable than chocolate sauce. It’s still a sin!

Several at the table were going to the show (singing & comedy w/ Jimmy Travis). I was in my jammies by 10:30 & settling down w/ the computer & hopefully finishing my book tonight. Overall, it was a very good day; & I’m really glad I went OUT.
Posted by Unknown at 10:31 PM