I was up a little after 9, wishing that my massage was this morning instead of at 3pm. What I really need is “Dr. Mike”; but a massage will just have to do. I like easing into the day (just because I have the luxury of time to do so). I move from the bed over to the sofa; eat some fruit & check out the new scenery that has appeared out my window. From my starboard side window I can see a tall rocky outcropping of an island that resembles a lush green “hershey kiss”. In fact, there are quite a few of these “islets” on the horizon just outside the harbour. Gustavia is a colorful, busy yachting enclave; very French (if you catch my drift). Serenity is at anchor just outside of the fish bowl shaped harbour. I know from past visits that it gets stiflingly hot because no air circulates through that tiny opening. So, I didn’t plan to go ashore because, frankly, it’s just not worth the effort. 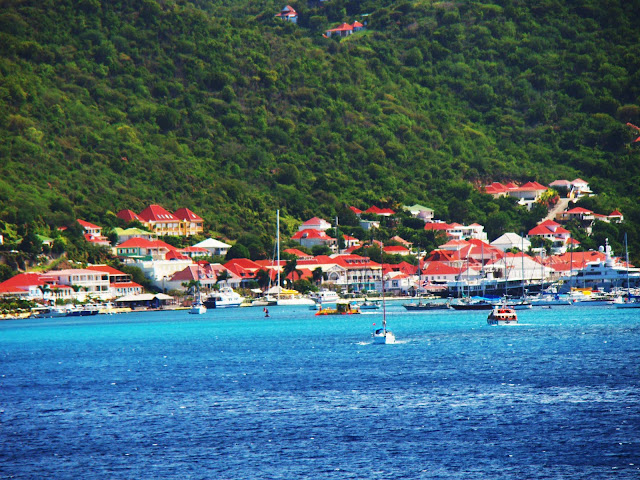 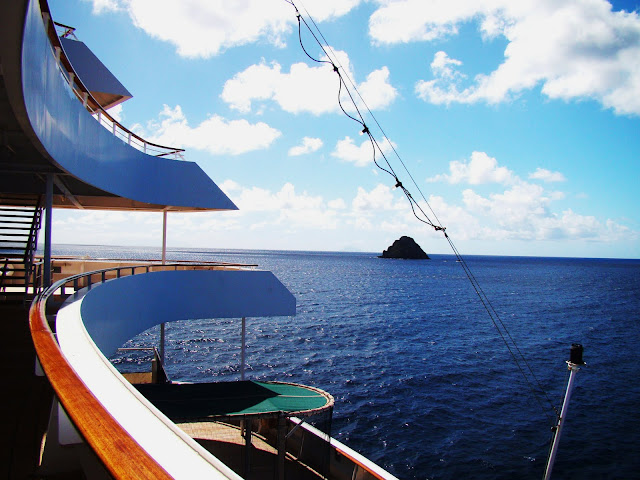 Hunger drove me out of the cabin by 10:30. I went for a cappuccino “fix” at the Bistro; & out on deck to shoot some photos of the harbour. I wasn’t sure where I wanted to go for my first meal of the day; so I found a quiet table by the indoor pool to read & drink my coffee. Shortly, David Carpenter (tablemate/lecturer) came & sat down. I became fascinated w/ his “Kindle” (for those of you who don’t know, it’s a small electronic device the size of a thin, yet oversized paperback book that holds copious amounts of text in the form of books & periodicals). I had never seen one in person; & I was fascinated. I had brought numerous paperbacks & magazines to read during the cruise; & he had the equivalent of 8-9 novels & several newspapers downloaded on the Kindle that he could read (whenever). He gave me a complete tutorial; & as you might guess, I’m going to have to get one for myself for Christmas (or just because). I may not be able to wait til I get home to order one from Amazon.

Anyway, he & I had a chance to talk about his lecture (entitled “Why is healthcare reform so difficult”) which I had seen replayed on TV this morning. I picked his brain about Medicare supplements & how to choose what’s right for me (when that day finally arrives). He’s quite brilliant. And I learned that he used to be the President of Pepperdine University & taught law at one time. He had fascinating stories to share. And his daughter, Kate, joined us for lunch. She’s an aspiring artist & “professional” rock climber (who knew there was even such a thing?). Lovely family. I had part of my lunch from the Lido buffet & part from “Tastes”. I finally got around to having a cup of the lobster/melon gazpacho from “Tastes”. For some reason it never tastes the same from day to day or cruise to cruise; & today’s, needed salt. There was cream of curried cauliflower soup w/ tiny diced apples. May sound like a strange combination; but it was very good. It didn’t really taste like cauliflower; & the curry was barely detectable (it just happened to be the color of curried cauliflower). The slightly sweet crispiness of the apples was a nice contrast. I asked the pasta station guy if he could make me the tiniest sample of the pasta of the day (cappellini tossed w/ roasted garlic, red chili flakes, parsley & olive oil). He made the cutest little bowl that had about 4 bites worth in it. It was perfection! I had small (about 3” long) vegetable chimichanga (sp?) & some hearts of palm. And since I was right there by “Scoops”, I HAD to get a scoop of the lychee sherbet that Christian has stashed away. I knew he would still have it back there; & he will keep it there until I eat it all. (Not good!)

By then it was a little after 2; & I went “home” to shower before my massage. A lovely Portuguese girl named Marguerida (yes, w/ a “d”) was my “torturer”; & she gave an intense shiatsu massage. No doubt I’ll be bruised tomorrow. She never could get rid of 2 knots behind my shoulder blades. She noted that my right calf was swollen (& inflamed, according to her); no wonder it hurt when she rubbed. Let me say it one more time, THANK GOD FOR THE WIG! You look hideous w/ massage oil up into your scalp & hair every which way but loose. Plop on the wig; run back to the cabin; & hope nobody sees you. I knew I was pretty well wasted for the rest of the day. I laid down & took a 90 min. nap; woke up as the sun was setting. We’re not setting sail until midnight; so no doubt some passengers are staying ashore & splurging at a fancy French restaurant.

To make things interesting tonight, they’re having a BBQ buffet on deck by the indoor pool. And the dining room is offering a different menu, open seating between 6:30 & 9 pm. Just for y’all, I threw on some clothes (& wig) & ran up to the Lido deck to take some photos. I didn’t really see what the food selection was. Quick dash back home to find Catherine to get her to order dinner from the D.R. 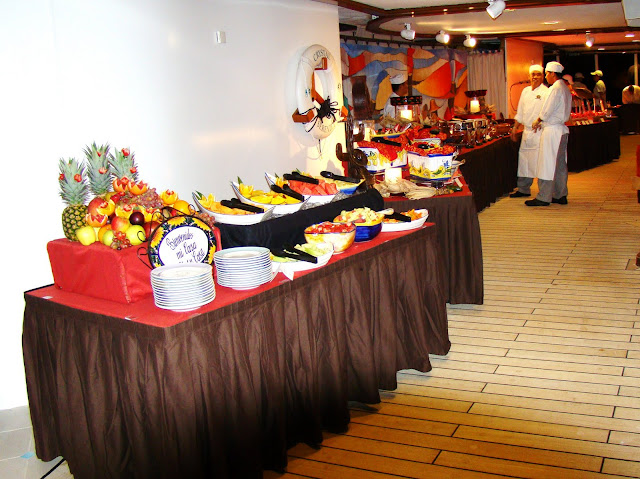 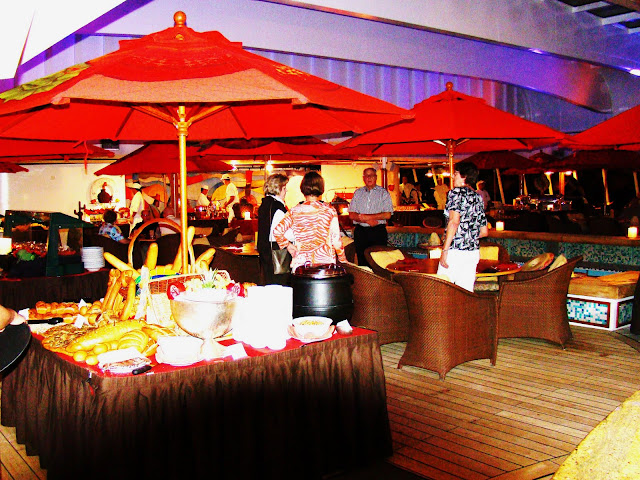 In no time, I was in my jammies & robe; & she returned soon & “set the table”. She (reluctantly) agreed that I looked like a worthless slug; & I got her to take a picture. I wanted y’all to witness the comfort in which I’ve enjoyed a good many of my meals. 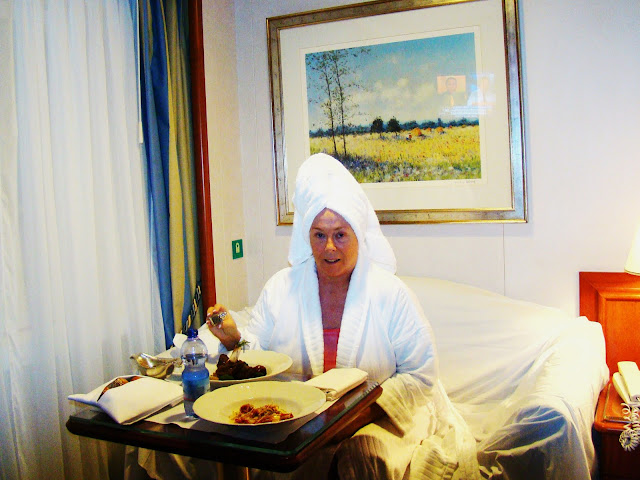 Now, about that meal………awesome. I ordered 2 appetizers (both of which are in the fridge for either a midnight snack or an unorthodox breakfast in the morning). One is a mixed green salad w/ baby yellow tomatoes & gorgonzola croutons (I’ll add my own diet dressing-for what it’s worth). The other is a beautiful dish of poached white asparagus, prosciutto & pumpkin seed hollandaise sauce. 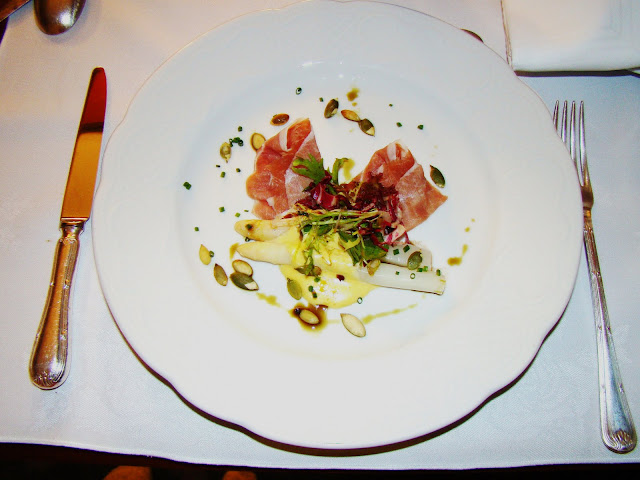 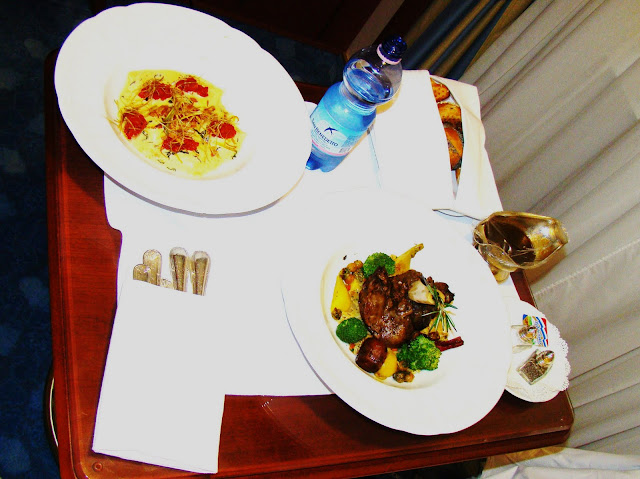 There was the nightly dilemma of which entrée to have. So, I asked for an appetizer portion of the pasta; three cheese ravioli w/ sun dried tomatoes, roasted garlic & leeks. It was to die for. My main entrée was braised baby lamb shank w/ Shiraz wine gravy on a bed of roasted veggie orzo w/ candied shallots (yum) & little baby beets that were about the size of a large English pea. And I did eat dessert first again tonight-pina colada sherbet. My bad???

We only have to sail 80 miles to our next port; so we’ll be creeping along through the night. I’m pretty sure I’ll be zonked out before 11. I’m a mellow mush (thank God)!
Posted by Unknown at 9:21 PM