The seas were perfect, the noises disappeared. So, why was I awake most of the night? Was it because I was worried about Josephine. Was it because that last cap. yesterday afternoon wasn’t decaf?? At 3:30am, I finally got up & took half an Ambien. And it was still a while before I went to sleep. But by 9:15, I was ready to get up. I slowly put myself together. I had some yogurt, granola & a sliced banana from my “kitchenette”.

First stop, the Bistro. The Chief was having his morning tea. I sat & chatted for a few mins.; & then made myself comfy at the bar. Had 2 cups of capp. & booted up the compt. for a little surfing. I had my eyes open for Julie or Judy; but they must be doing some (TA) seminar stuff today. It was very busy & loud in there this morning (more so than I’ve ever seen). I chatted w/ my friend, Joyce online on FB; & I told her I was wishing that she could be here right now. Two ladies came in for coffee; & saw me on the compt.; & asked about the internet service onboard. I had a feeling that one of them was a TA that might have just boarded yesterday in Aruba. It turns out, one of them was; but she boarded in Caldera on Thurs. Lynn (IL) & her friend, Gay (VA) started talking about the blog (which I was working on at the time). And this lead to a long discussion about all things “Crystal”. Very nice ladies whom I hope to see again this week. After a couple of hours I felt like I was growing roots to the bar stool; so I moved up to the Lido deck.

[A LITTLE OFF POINT HERE……Quite a few people have seen me at work on the blog; & they’ve asked what’s the blog address. I feel stupid saying I don’t know the address; but I don’t. I just give them my e-mail address; & tell them if they’re really interested, they could e-mail me & I’ll e-mail the link to them. By now, I’m getting rather self conscious about the blog. It was different when I thought nobody but family & close friends were reading. Of course, I’m not totally naïve. I realize that anything I put out there in cyberspace is public domain; but……this has become painfully apparent when I had an unpleasant, rambling comment on the blog from someone who took offense because I even brought up the subject of Angelina Jolie’s adoption of young, David. This was an innocent conversation I had w/ my Malawi friends; & in no way did I state an opinion either for or against. This person wanted me to know that (this anonymous) “he/she” did not approve. That being said; I got your message. It has been deleted & that is as much attention as I intend to devote to the subject.]

I perused the buffet; & the only thing that tickled my fancy was the Mexican spicy corn & tortilla soup. So, I took a bowl & went in search of a place to perch. Saw Spike & Lynda (“Either-Oar” from CC) & chatted a few mins. Boris & Petar were working upstairs today; & I sat in Boris’ area at “Tastes”. Since I wasn’t craving anything in particular, I chose a cheeseburger & fries. I told Boris that I wanted the thin sliced dill pickles like you get w/ room service. He comes back a little later w/ the thick sliced pickles that they usually give you at “Waves” (the grill). But he also put a spoonful of pickle relish on the plate thinking I might like that instead. I said, “no, but thanks; I really wanted the little pickles”. He disappears & in a few mins. comes back w/ a little plate of tiny (dill) gherkins. I was really beginning to feel guilty now. He insisted on going to find out where the room service pickles came from. He wasn’t going to give up. I had to grab him by the hand & beg him to let it go. (Where else would you see service like this except on Crystal?) I’ve been referred to all the great staff on Serenity as “rock stars”. I have now dubbed Boris, “my pickle rock star”. (And BTW, I did eat all the pickles, so his efforts weren’t for naught.)

As soon as I ate my first French fry, I thought of Keith (“Keith1010” on CC), who would almost rather die than to let a ff pass through his lips. I just had to pull out the camera. Because, Keith, that first one was for you…… 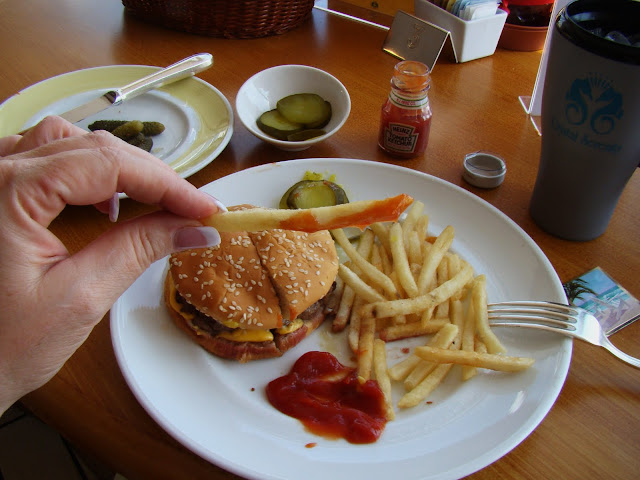 I read while eating. Spoke briefly w/ Bryn & Allen (tablemates) who were eating nearby. And Dave (“Crystal Kid” from CC) came by to talk a while. Still no sign of Julie or Judy yet. I had wanted to ask Julie if she needed a ride back to Naples since I had the car service coming for me. She probably already has some arrangements made; but I wanted to offer anyway.

When the lunch service started to wind down, I asked Nat to take a photo of Boris, Petar & I. I’d rather do it up there than in the formal DR later. Although I was kinda full, I couldn’t just walk right past Christian & not “accept” some lychee sorbet. He had such a sad look on his face & was embarrassed to admit that he’d run out yesterday & had forgotten to “steal” some more. He said he could go get some in about 30 mins. I told him not to worry; but that he better have some there tomorrow. Then I winked & handed him his Christmas card. 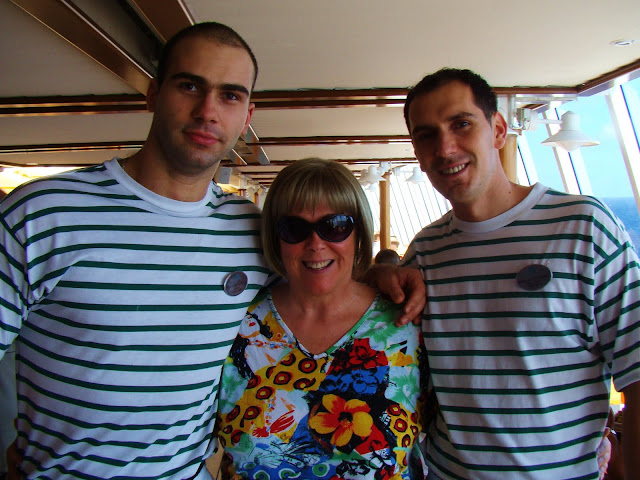 I walked down through the Crystal Cove & the shops; not seeing anyone in particular. So, I went “home”. I sat w/ the computer for a while; & started to feel tired. So, I lay on the bed about 3:30, thinking I had time for a nice long nap. My eyes are glued WIDE open. (Note to self: DECAF ONLY)

Back on the computer; using internet time as if it cost nothing (well, it doesn’t actually, YET). I don’t know if it’s because I’m a little sleep deprived or trying to come down w/ something. When I laid back down about 5:30, I had a little chill. I did doze off for a short while. Really thought about skipping the dining room tonight; & I would have if the Chief weren’t dining w/ us. I had to warm up w/ a hot shower; & prayed that the Aveda “stimulating” body wash that they provide would give me the boost I needed to get through the evening.

I ran into Julie just outside the DR. She said she’d had a relaxing afternoon; & that they had only been in “seminar mode” about 90 mins today. Judy (DSM) just basically said, “here’s what we do; so go out there & experience it for yourself”. They’re eatin’ it up!

I perked up a little at the table. Since I knew Fran was joining us tonight, I couldn’t help but play a little joke (on myself, really). There are place cards on the table on the nights that the Chief dines w/ us. I made a “tent” to cover up Fran’s last name on her place card. On it I wrote, “Miller”. Fortunately, she saw the humor in it; & I went over to apologize profusely for my faux pas. I also passed along a few messages from “mutual friends” on CC. At the end of the evening, she came over; & hugged me to show there were no hard feelings. Such a beautiful, gracious woman. I still hope that we get to sit next to each other at the table so that we can REALLY talk.

I sat between Allen & Barbara; & there was a lot of lively conversation around the table tonight. The Chief seemed a little subdued; but always the congenial host. I had a little more wine than usual; & between “warm flashes” & funny stories, I was quite “happy” by the end of the evening. As for French night dinner, I started w/ the fabulous, extremely garlicky escargot, sopping up all that decadent butter w/ a salt stick. And again I had the paccheri pasta w/ pancetta, wild mushrooms, onions, tomatoes, with cream & truffle oil. Most everyone had the baby lamb entrée. It is garlic-herb crusted w/ a mint flavored sauce; accompanied by finely minced ratatouille & gratinated potatoes. Divine! Allen had ordered a fish that none of us had ever even heard of – pargo. Boris explained that it was a type of red snapper. It’s a mild, white fish that was broiled w/ basil butter. He let me taste; & it was outstanding. It reminded me a little of catfish, although I’ve never had catfish broiled. And he’d never eaten catfish, so he had nothing to compare it to.

I decided on cheese & fruit again tonight. Don’t ask me what they were; other than one of the 3 being another variation of brie, I have no clue. I told Boris I wanted some fruit to go w/ it. He disappeared; everyone else finished their dessert & were ready to leave the table & go to the show. The Chief left; Bryn & Allen hesitated to leave me by myself. In fact, only a few people were left in the DR. I kept wondering exactly where Boris had to go for that fruit. Finally I took my bread plate; put my cheeses on it & got up to leave. I have fruit in the cabin I could pair it with. The head waiter (“tall” Peter), was watching me, rather puzzled. I suddenly got tickled (too much wine); & said I was mad & was going to my room to sulk. He thought I was serious for a min; & I told him to apologize to Boris because I wasn’t hanging around til breakfast waiting for that fruit. I started walking out; & Boris is running after me w/ that awesome “mincemeat” raisin stuff I love. Gotta love this guy.

My Istanbuli waiter friend, Kamel, is always standing close to the exit to bid me good night (w/ a kiss). It had always been the European 2 cheek kiss; but the last 2 nights, he puckers his lips & dives in. “Tall” Peter’s watching this; & I made the comment that Kamel’s nothing but a “dirty old man” (he is old). Peter’s cracking up; & Kamel said, “Oh no, now everybody’s going to be calling me that”. These guys are so adorable. One min., they are portraying the epitome of proper decorum; & the next, they’re just a bunch of normal, fun guys.

I did learn something while talking w/ Barbara during dinner. Her husband, Alan is very quiet; & at one point, he mentioned something about being on steroids. Barbara told me that he is very ill w/ cancer & has lived much longer than anyone could have predicted. This explains a lot; & also reminds me that first impressions can be deceiving. They are a brave family. I’m home for the night by 10:30. On my bed I find this lovely golden box of See’s candy, along w/ a letter from Crystal that says “sit back, relax & savor a delicious surprise – while planning your next voyage w/ our 2010 special anniversary calendar”. Sounds like fun….what can be better than going to bed w/ a box of chocolates & a Christmas (Crystal) “wish book”? Sweet dreams???
Posted by Unknown at 1:31 PM