Thanks to Advil PM, I slept pretty darn good last night. I woke a little before 8 when I became aware that we were no longer moving. If I had my way, we’d be at sea all the time & never stop anywhere. According to the bridge camera on TV, it alternates between clouds & sun. It’s humid; but in the low 80’s. I couldn’t decide what I wanted to do. So when in doubt, do nothing. I made my nest on the sofa & thumbed through the magazines I’d brought along & watched HLN. Breakfast turned out to be a banana & apple from my fruit basket. At this point, it could only do me good to skip a meal. 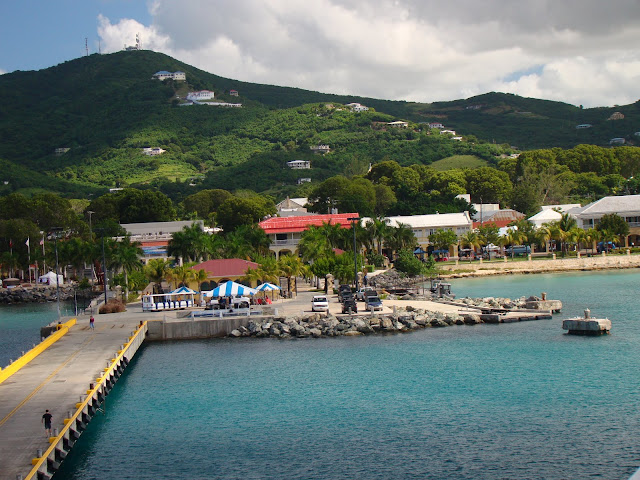 Finally at noon, I was ready to get out & about. I went by the reception desk to make a copy of the cocojito recipe & put it in an envelope for the cruise director. Then up to the Bistro for my cappuccino & admire the lovely island of St. Croix (since I had already nixed the idea of going ashore). Since most people were ashore, I went to the (quiet) DR & enjoyed a lovely lunch & some reading at a nice two-top table by the window. For an appetizer I had 3 tiny BBQ chicken wings w/ blue cheese dip. The meat & skin had been pulled back so that you could actually take the meat off w/ the fork & not use your hands like a cannibal. Next I had cream of sweet potato soup w/ chunks of very spicy chorizo (divine). My main course was an unconventional Cuban roast pork sandwich; with added roasted bell peppers, onions & tomatoes (I did take off one half of the bun). It came w/ “chili dusted” popcorn (?) & fried mushrooms. I passed on dessert since I had promised to get back to Scoops to see if Christian was able to procure the lychee sherbet for me. 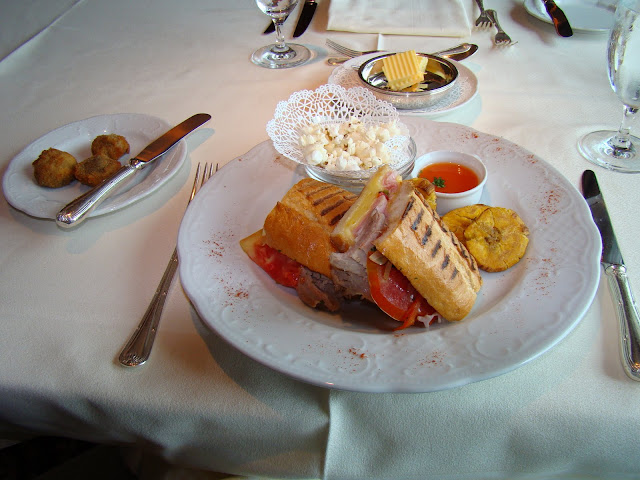 Feeling much more sociable today & the timing was perfect, I went to the theatre at 2:30 to see “Julie & Julia”. LOVED IT! A gentleman came & sat down a few seats away from me in the theatre; & he said “I know you from Cruise Critic”. He also asked if I was de-stressed yet. (He obviously had been reading my posts about hibernating until I regained my sense of humor.) After talking w/ him awhile, I realized that “Harvey” had been on this cruise last year. His face was very familiar; but I had not known his name before. About 4:30, I went up to Scoops; & sure enough, Christian had my ice cream. I think I could eat that stuff 3 times a day. He pulled a tub of it out from a secret hiding place. I didn’t ask; but I’m willing to bet that he’ll keep it hidden there for me every day (like I really need this EVERY day). Just another shining example of how eager they are to please.

I went to the computer center; & they loaned me a (photo memory) card reader so that I could import the photos from my camera. I didn’t bring my portable reader; & I wasn’t aware that the memory stick pro duo is too small to fit in my new baby Acer laptop. So, I can now add photos to FB & to the blog. I then went back “home” to watch the sunset from my window. There were still plenty of dark clouds passing by; & I believe that it had drizzled rain off & on this afternoon. From what everyone was telling me, I didn’t miss anything by not going ashore. I can say that the new pier that was rebuilt after the hurricane ravaged the island many years ago, is 1,000 times better than it used to be. And the water is still the many shades of green, aqua & marine blue; the scenery that postcards are made of. As if timed perfectly, we pulled away from the dock just as the sun dipped on the horizon & Louis Armstrong’s “Wonderful World” played over the PA system. And, yes, I had tears rolling down my eyes. Does it to me every time.

I wasted a long time uploading photos to FB & the blog. About 3 mins. for each pic (I miss my broadband). While I waited on the compt. I debated back & forth about going to the DR for dinner or ordering in. I actually was in the mood for company; & since it was a casual night, I threw on some decent clothes. I was ready before 8; so I decided to go up to the Palm Court & take the cocojito recipe to show to the bartender. He adjusted the amount of Coco Lopez; & it tasted much better than the ones he made yesterday afternoon. I think I could get hooked on these things. While I was sitting at the bar, Ren (the guy from Naples who sat at my table the first night) came & sat down next to me. In a joking way I tried to ask him if we drove him away. He laughed; but he never did tell me why he changed tables. We talked until it was time for dinner.

Everyone was back at the table tonight. I sat next to Joan; & she’s alright once you get to know her. David & his daughter (Kate) went kayaking this morning. He was complaining that he found it very strenuous despite the fact that Crystal advertised it as moderately strenuous. Seymour & Harriet took the circle island tour; they were not impressed.

(Boris)lav & Petar (our waiters) are becoming more charming every night. Took them a while for their personalities to shine through. Another fabulous dinner. Since I can’t seem to say no to the cream soups, tonight I had the sweet corn chowder w/ fried leek “straws”. How can it just keep getting better? The pasta dish looked luscious; & I asked for an appetizer order of it: spaghetti splayed across a small plate w/ dollops of 3 different sauces (bolognese, marinara & creamed mushrooms). Decadently rich & to die for. I was torn between 2 main courses; so Boris suggested that I have half & half. I had a half order (3) pan seared sea scallops on a dollop of pumpkin risotto. The other half was a braised beef short rib encrusted w/ mustard & parmesan cheese; pinot noir gravy & a touch of horseradish cream. The plate was “framed” by littler florets of fried cauliflower. It was heavenly! I was too stuffed for dessert; but I watched as everyone had cherries jubilee. While we were sitting there, David said something about “Steve” Forbes. And a little light bulb went off in my head……I realized the other day that I said I got on the elevator w/ “Malcolm” Forbes. I know you all think I’m crazy; & I have been mentally unwell. No, I am not in an alternate universe w/ the dead; my fingers just didn’t type what my brain was thinking. My apologies for leading you astray.

It’s almost midnight; & I’m beat. Not even checking the message boards tonight. Off to bed I go.
Posted by Unknown at 10:43 PM