It’s another hot & steamy day in St. Barts. On TV it shows the temp is only 82; but the humidity is 7,140.0% (yes, that’s EXACTLY what it says). And it certainly feels like it. We are at anchor just outside the harbour. Amongst the numerous private yachts & sailboats, I see what appears to be one of the Seadream Yachts anchored off our bow. It goes w/o saying that I’m not going anywhere today. 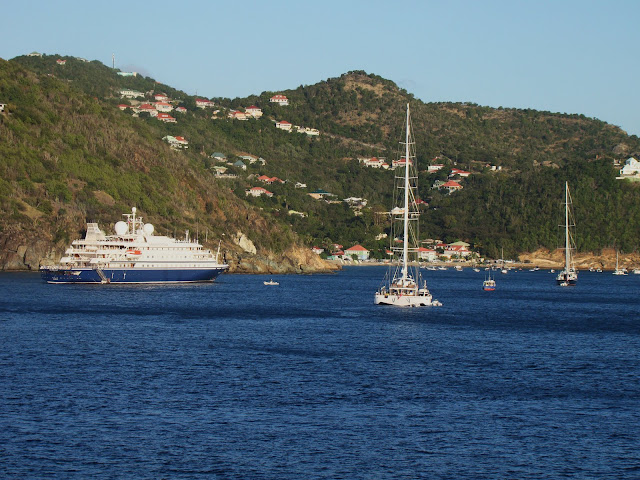 It took a long while to get to sleep last night; but I did sleep very well til around 9-ish. I am aware of unpleasant “sinus stuff” so that fully explains why I felt strange yesterday. I looked outside the door; spotted Catherine; & told her I wouldn’t be needing any service this morning. I got my book & read a while, enjoying lounging in my very cool, darkened room. Around 10, I threw on some clothes & covered the head & went down to the Bistro. I told Mario there would be no more caffeine for me. My new standing order would be a dbl. shot decaf capp. skinny. I said a brief hello to Dave & his table of friends while I waited. I made a quick stop at reception to change a large bill & then back “home” to the blog. I intended to have breakfast; but never got around to it. Maybe I’m finally tiring of eating, MAYBE.

At 12:45, I redressed & headed to the Lido buffet for brunch. I had small tastes of quite a few good things. I had another bowl of the cream of curried cauliflower soup w/ diced apples (still excellent). The taste of veal stew w/ paprika cream sauce was delicious; as was the smoked duck chimichanga. I had a dollop of sundried tomato mashed potatoes (yummy). I asked Chester, at the pasta station to make me an appetizer portion of pasta using olive oil, roasted garlic, onion & red pepper flakes. It was divine. Benjamin came over; & I asked if he had his family’s picture w/ him. He did. His wife, Susan is really a beautiful young woman (obviously younger than he). And his children range from adult down to about 4. They are a lovely family; & I must say that Ben looks more youthful in his uniform than he did at home in his street clothes.

I heard people standing in the dessert line raving about some sort of dessert. I went to look; & the guy said it was sticky toffee bread pudding w/ caramel sauce. Oh, Lordy. How could I not? I handed him a tiny saucer & told him I wanted exactly 2 bites worth. And that’s what he gave me. It was simply orgasmic. As I walked back through Tastes, Christian caught my eye. I had to stop. But he had several “customers”; & I waited patiently for my special “fix”. He was disappointed that I only wanted one scoop today. I brought it downstairs w/ me. Which by the way……I have used only the stairs so far today (including going down from 12 to 7).

I had a little over an hour to kill before my 3pm massage. I read & then showered. I (rode the elevator up) arrived at the spa right at 3. Much to my surprise, they had “lost” my 'medical history/paperwork' since the last segment; & I had to fill it out all over again. What a pain! My masseuse was Lacey from Aurora, NY. Can’t say that I’ve ever had an American work on me on a cruise ship. My appt. was for a hot stone therapy massage; but after talking, she decided to extend it to add some more shiatsu. She’s determined to get rid of those 2 “speed bumps” behind my shoulder blades that the previous masseuse did not. There was very little small talk; all business. She was outstanding. She got the 2 knots out in the back; but didn’t quite get all the tension out of my neck. But I’m happy that the sinus headache is gone for now. I came straight “home” (walked down 6 flights, thank you very much). 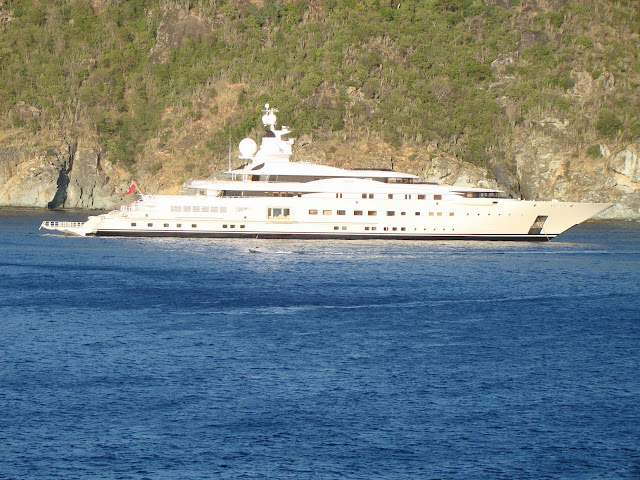 I took the camera & stepped out on the promenade deck to take some photos. The sun was golden orange, low in the sky. It was in the upper 70’s & felt so nice out there. A magnificently gorgeous yacht caught my attention off the port bow. Through the lens of the camera, I could spy “gorgeous people” lounging on the deck & several jet skiers doing figure 8’s around the ship. I took several shots; & didn’t realize just what it was until I came in & did a search on the internet. The “Pelorus” is 377’ feet, the 14th largest private yacht in the world. It was built in 2003 for $300M (US); & is currently owned by a Russian billionaire. It comfortably accommodates 22 w/ a crew of up to 46. I could almost hear Robin Leach’s voice saying “champagne wishes & caviar dreams”. WOW!

We set sail at 6pm; only have 20 something miles to cover before arrival in St. Martin in the morning. There is a deck BBQ around the Seahorse Pool tonight from 7-9; & the DR had open seating from 6:30-9. There were a few things on the DR menu that I wanted to have again; but it was so nice outside I also wanted to check out the activities upstairs. What to do? When in doubt…..do both! 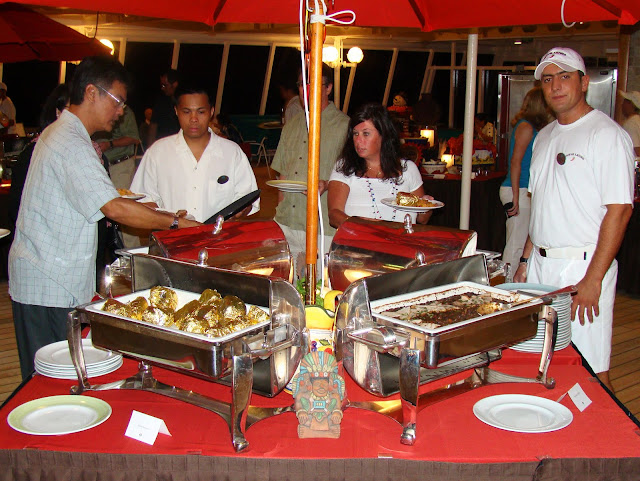 I thought it best to go up to the BBQ first before the food displays were dismembered by the hungry masses. Looks like the majority of the passengers were there; & the lines were long. They SHOULD have found a way to have a double line for the meat carving, the ribs & the fajita makers. It was backed up about 25 deep for a long while. There was a mish mash of everything; baked potato fixings, salad bar, bread table, oriental stir fry (at a BBQ?), shrimp/squid kebobs, black beans & rice, vegetable choices, steak, chicken, ribs, tamales & 2 dessert tables. The best thing I had was the (made to order) fajitas. Yummo! I did get a kebob & a chicken tamale; they were so-so. The band was playing; & everyone was in a festive mood. Some were dancing. I sat & talked w/ Outi & John for a while; & met the art historian/lecturer (Dr. Yvette Sencer) who was sitting at the table w/ them. I saw Julie & Toni; but never could find Judy Miller. She’s disembarking tomorrow; & I wanted to say goodbye. I took my photos; fixed a plate & headed back to the cabin. 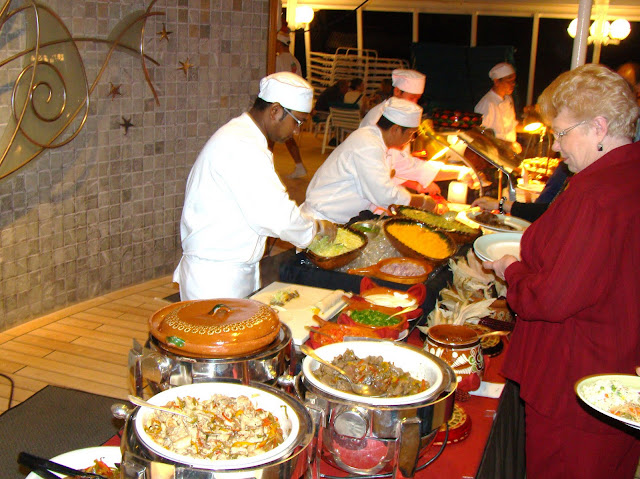 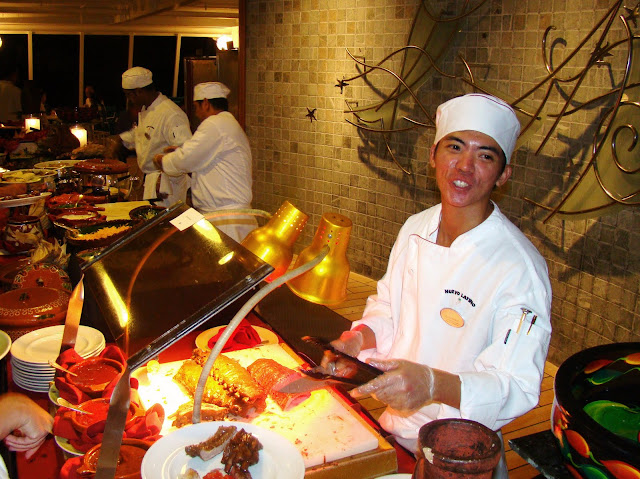 Catherine was in the hall; & I asked her if she would get me a little something from the DR before it closed later. I got in my jimmies; & started watching the nerve wracking Lakers/Bucks game on ESPN. Say what you will about the man….broken finger or not, Kobe’s still da man! (It doesn’t get much better than this.) 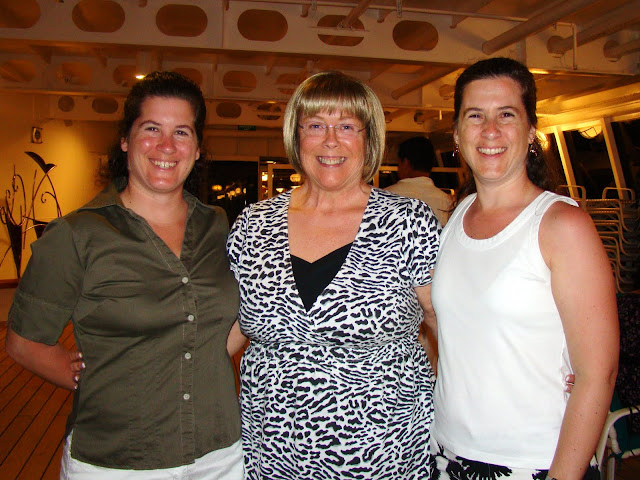 In a little while, Catherine brought me a sample of the 3 cheese ravioli w/ sun dried tomatoes, roasted garlic chips & sage butter sauce. (Man, do I love that stuff.) I also had an appetizer of white asparagus w/ slices of prosciutto & pumpkin seed hollandaise (which I had fallen in love w/ during the last segment). I grazed on this combination feast til after midnight (with a little leftover for breakfast in the morning). It was pretty much a perfect day. There’s the tiniest bit of motion on the water tonight. Since we have such a short distance to travel, the Capt. said he’d probably cut the engines & idle until the pilot comes onboard about 6am. I feel like I could sleep forever (I think I’m falling into a food coma).
Posted by Unknown at 5:48 PM