Man, I didn’t want to get out of bed this morning. I think I finally went into a deep sleep just as we were getting closer to land. That was when the “bathroom noises” stopped because we weren’t rocking in the rough seas any more. It felt good to just wallow; maybe those “long past expired” Tylenol sinus pills had something to do w/ it. But I was grateful that I actually did wake up this morning. It was time for crew lifeboat drill again; & when the Capt’s voice came booming over the PA at 10am, I knew I ought to get up. Poor Catherine would want to get in here & clean soon afterward.

It looked gorgeous outside; strong winds; but it looked HOT. I dressed; & went down to the Bistro for my capp. Back in the corner I saw a familiar (yet, not so familiar) face. She jumped up & came over to hug me; & then it clicked……it was Judy Miller, the so FL Crystal DSM. She (& many other TA’s & DSM’s) got on this morning; using the Serenity as transportation only as far as St. Barts or St. Marin. Judy & I have developed a friendship over the past 3 years, catching up w/ each other at the semi-annual AAA travel shows. She & her husband, Eric, have sailed at this time in years past. I didn’t know she was going to be onboard. We sat & talked for about an hour. I sat there so long that the Bistro closed their breakfast buffet. But not to worry, that meant that lunch was becoming available elsewhere. 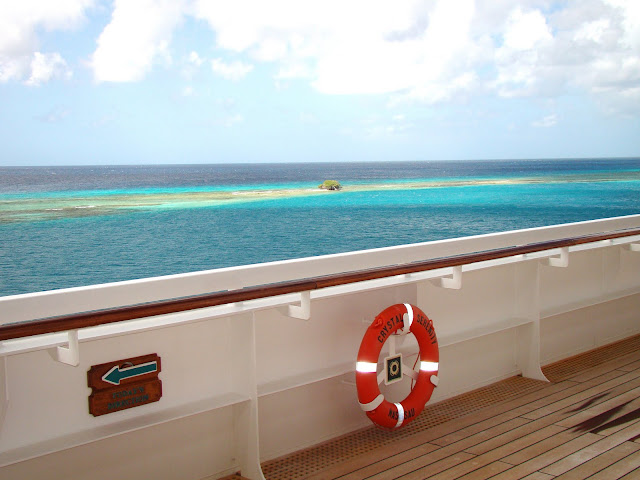 I went up to the Lido around noon; & perused the buffet. Nothing really excited me; so I decided to eat at “Tastes” around the indoor pool. While I was there, I handed the stack of envelopes to Raymond to distribute to the Lido guys. In it was the group photo, Christmas card & a little “bonus”. The Lido guys have to “pool” their tips that go on our shipboard accounts. But there are too many special people that go the extra mile for me (well, everybody). And I like to give them a little something extra. I do this before the end of the cruise, along w/ a card so that it doesn’t look so obvious. I don’t want them to HAVE to share this w/ the “pool”.

With the help of Rey & Ed (who has moved in from the pool area this cruise), I ordered lobster/melon gazpacho & a reuben sandwich. I sat & worked Sudoku puzzles & looked out at the beautiful popsicle-colored buildings of Aruba while I ate. Christian served me sorbet, telling me how much he missed seeing me yesterday.

Shortly, another familiar face appeared, Dave (“Crystal Kid” on CC). He has been on at this time the past 2 yrs; so we had a chance to do a little catching up. I asked him if he knew anything about the “mysterious” entertainment event that took place in the Galaxy Lounge yesterday aft. (the one I got an invite to). He did go; & said that it was special preview of the Christmas show that would be presented on the next cruise. Just a few “snippets” for us; maybe a sort of dress rehearsal for the performers. Who knows why? But at least I didn’t miss anything “life altering” by not going.

I made a few phone calls. Called Josephine (my ailing, elderly friend who I have befriended since she has no family locally). I was upset to hear that she isn’t doing that well. I had been hearing from other neighbors that she wasn’t herself; & she admitted that she’s been depressed, not eating well & feeling weak. She hasn’t felt like playing cards, going to church or volunteering at the thrift shop. This is definitely NOT GOOD. I’m left to wonder if she’s feeling abandoned w/ me gone; or if it’s just time to adjust her medication.

Then I called another neighbor/friend, Monica; & she confirmed that everyone is worried about Josie. I’m glad her daughter from Mass. is flying in before Christmas because some decisions need to be made. Again, I’m going to TRY to not worry about this.

About 4pm I went down to the Bistro for another capp.; & basically to hang out hoping to see Julie from AAA Naples (who also boarded today). She’s getting her first taste of Crystal; & I can’t wait to hear her impressions. I found a table back in the corner & plugged my laptop in & did some surfing. Ioannis (the “Chief”) was taking a break so he came over & sat down to have his coffee. I must say he looks pretty fine in his regular white uniform too. I happened to mention the strange noises that had bothered me for 2 days. He asked why I didn’t call & report it. He got right on the phone & called somebody to go & check my cabin (knowing full well that it would be dead quiet since we were docked). He thought maybe there was a screwdriver or some other tool left in a place that might roll around. I assured him it was not a “loose tool” kinda noise. (Trying to explain to a Greek that the noise was a creaking/rubbing/sea mammal howling sound wasn’t making the proper impression.) Within 10 mins someone called him back saying that they could find nothing out of the ordinary. He made me promise to call the desk & ask them to call him if it happened again. It’s nice to know people……who know people!

Something weird happened to my word processing software this afternoon. I realized I had made a mistake in the blog several days ago; & I wanted to go back & correct it. (I had mentioned someone by name & got their last name wrong……so sorry Fran.) Only, I kept getting an error message saying the program was locked. I thought, what the……? I don’t know when, how or why it was happening; but I went right to the compt. ctr. I think it had them perplexed for a while; but God bless Jessie Moncatar who worked on the problem for more than an hour. I’ve now dubbed him the CU@Sea “rock star”. He wasn’t sure why it happened; but he loaded an older version of Word on my laptop so I could continue to work on the blog. I was soon back in business. While I was seeing to my laptop, we set sail for St. Barts.

It’s casual night; Neptune dinner menu; not one of my favorites. A few couples from my table were going to eat in the Vintage Room tonight; & I would rather have skipped the DR & gone up to “Tastes” to eat al fresco. In fact, I considered going to the DR; & if nobody was at my table, I was either going to go to Silk Road & sit at the sushi bar (where you don’t need advance reservations) or eat by the pool. I went down to the Crystal Cove a little early still hoping to see Julie (from AAA). I saw Harriet & Seymour having a drink; so I went over & talked w/ them a few mins. Then I saw Judy Miller heading to the DR. I asked her where Julie was; & she pointed her out in the DR. I went over to Julie’s table & met her sister, Toni. And she introduced me to M.J. (an agent from C&I Travel in Naples) & her friend. I kneeled down by the table to talk to them a while; not in any hurry to get over to my table (cause I thought nobody would be there). When I did go to my table, there was everybody. Everybody except Fran (the dear lady who’s name I got wrong in the blog). Apparently, there wasn’t enough interest in the Vintage Room experience tonight, so it was canceled. I did get to sit next to Natalie & her husband, David & talk to her for the first time. Turns out, she is a TA who used to own her own agency; but sold it & now sells travel as an independent contractor for her old agency. Did I confuse anybody? She is truly delightful; & we had a long & interesting conversation. In fact, I felt compelled to apologize to everyone else at the table because it appeared that I was ignoring everybody else.

I enjoyed the table talk so much I didn’t seem to mind the weak menu. I had the lobster strudel in puffed pastry again. It really is to die for. And I went right to the main course (wanting to keep my options open in case I did go to Silk Road for some sushi for “dessert”). I had the pasta special (which I also had before); rigatoni w/ prosciutto, asparagus, tomatoes, a light lemon sauce, sprinkled w/ pine nuts. “Tall” Peter (Head Waiter) was making bananas foster tableside; & I was really tempted. But I went for the cheese & fruit thing (trying to be less bad). Tonight I had camembert, Saint Loupe & some weird sounding foreign name (all mild, nutty cheeses). The selection of fruit condiments had changed unfortunately, so I had to satisfy myself w/ figs & prunes! But the cheese was delicious. Before I finished almost everybody got up & headed to the show. But Barbara & Allen were still having their coffees. We chatted briefly & parted ways about 10:30. I headed home. Checked HLN (is everybody as tired of hearing about Tiger’s escapades as I am) & gonna read a while. The seas are still rolling a little bit; just enough to be rocked by; but not enough to make any unpleasant noises (power of positive thinking).
Posted by Unknown at 12:07 AM

I am so enjoying your current blog (2012) that i started reading all of them --- truly excellent!