Well, I slept surprisingly well considering the amount of sleep I got yesterday. I’m so happy to feel good again. I was awake by 8:15; turned on the bridge camera view to see exactly where we were. I could see the first set of locks (Miraflores) up ahead. The weather looks spectacular; & I certainly hope it holds up. It’s good to see the western half of the canal zone in sunshine instead of the torrential rain we had on Tues. 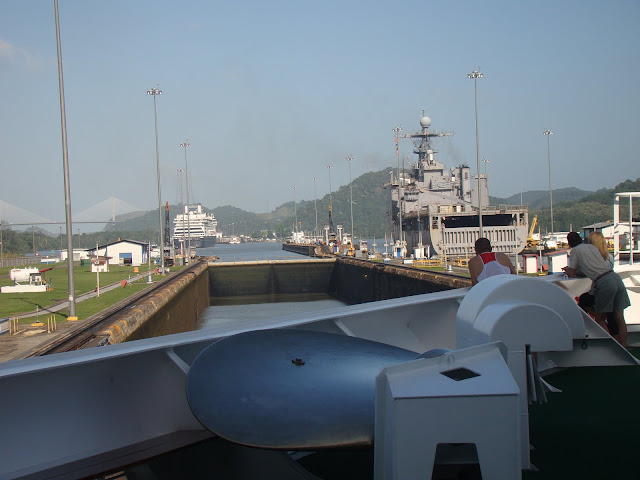 I did not order cabin breakfast; so I slapped on the wig & glasses (real clothes for a change) & went up to the Lido buffet to “steal” several boxes of granola & yogurt. I decided to stock my cabin w/ breakfast food for two reasons. Mostly to eliminate the temptation of eating omelets, bacon or pastries for breakfast. And secondly, as not to bother Catherine any more than necessary. I went to the Bistro for my capp. Came back “home” & got comfy on the sofa where I spent the next 3 hrs. on the internet. I hadn’t read the CC boards in 5 days (that’s a sacrilege). I updated the blog; & perused a few other websites that I was longing for. Still haven’t visited the NutriSystem boards; although I could probably benefit from the advice & support. I am tiring (somewhat) of the extravagant eating. Note to self: I am, from this point on, tapering off!

Throughout the morning, I never did manage to eat my breakfast. I was so focused on the blog; & my double shot capp. provided the sustenance I needed (temporarily). By 1pm, it was time to search for food. I went to the Lido buffet & got samplings of a few very good things. I had the cream of sweet potato soup; but my serving sadly had no hint of the chorizo which made it so delicious previously. I had some tomato & mozzarella salad; some hearts of palm; a beef kebob; a small square of polenta lasagna (unbelievably good); grilled eggplant, zucchini & onions (LOVE that stuff); & a tiny tortilla basket filled w/ shredded chicken & cheese (delicious). I had a table at the back of the Lido restaurant where I could see behind us but still in the a/c, since by now it was getting quite hot outside. I enjoyed the scenery as we sailed slowly through the vast Gatun Lake. 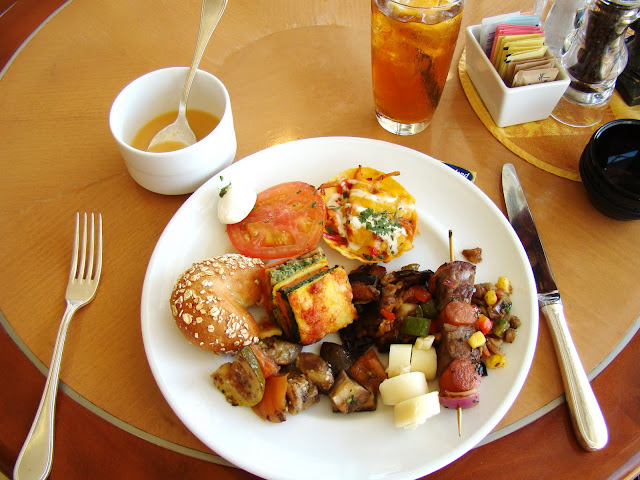 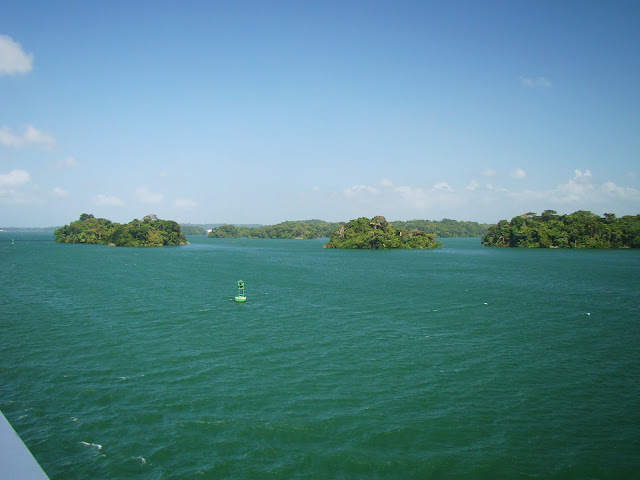 By 1:15 it appeared that we had stopped. I could see off to our port side the huge battleship that had preceded us through the locks earlier. Off to our starboard side was HAL’s Amsterdam, also stopped. The narrator came over the PA to say that the winds had picked up; & they felt it prudent to wait a while so as not to get blown against the side walls when we enter the chamber. The much smaller Seabourn Legend was inside the first set of locks in front of us. And eventually the battleship (obviously not concerned about scraping up their probably already battered hull) moved into the left side of the locks. Traffic was still moving one way in both lanes. 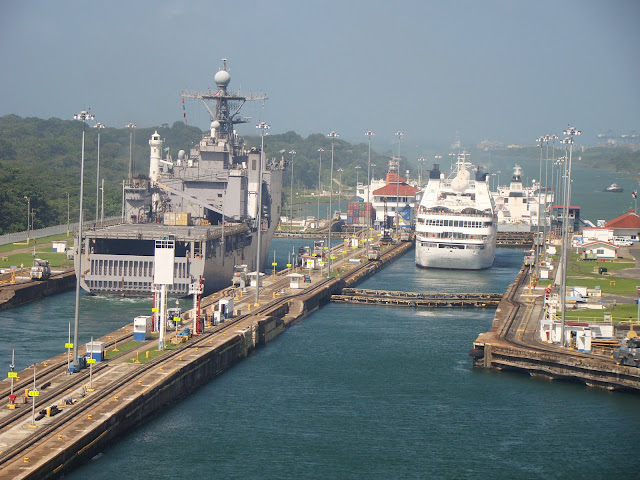 I decided to go up to deck 13, all the way forward for a bird’s eye view. And I couldn’t help myself. With the sky so blue & the perfect vantage point, I had to take a few more pictures. The ship’s photogs were making the rounds; & I let them shoot one of me along the railing. All the time praying that I’d pinned the wig on tight enough. God only knows what that’s going to look like. Maybe I’ll post it; maybe not. 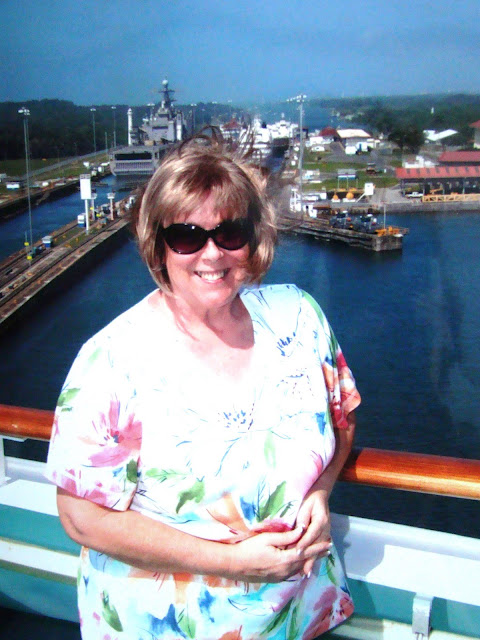 Finally a little after 2, the Legend had moved through & the gates opened to allow us entrance. It was slow going; & we didn’t actually get into the lock until about 2:30. I went back to the cabin & spent 1½ hrs. trying to catch up w/ the NutriSystem message boards. It had been 8 days since I last visited there.

About 4pm we were nearing the spot on our port side where the French had started the dig back in the very early 1900's. I ran out to get a shot of that. You could see that they did not envision the importance of this channel way back then. Because nothing wider than a private motor yacht would fit through their channel. 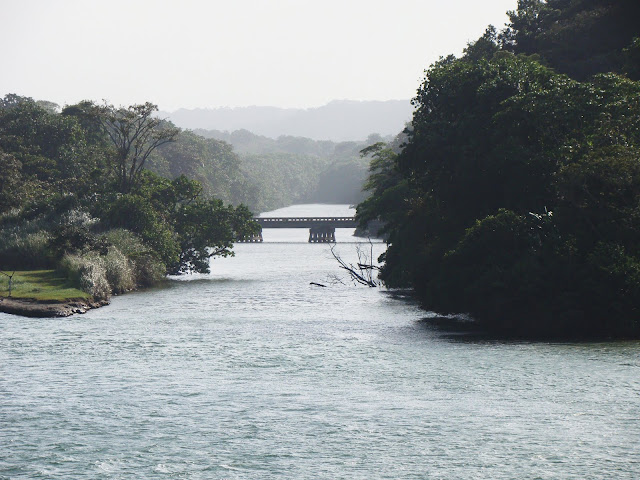 Within a few minutes on our starboard side was the opening for the new dig. They have started a channel on both ends of the canal which will eventually meet somewhere in the middle. This additional channel & sets of locks will greatly increase the amount of traffic the canal can handle, as well as accommodate the “post-panamax” ships being built today. 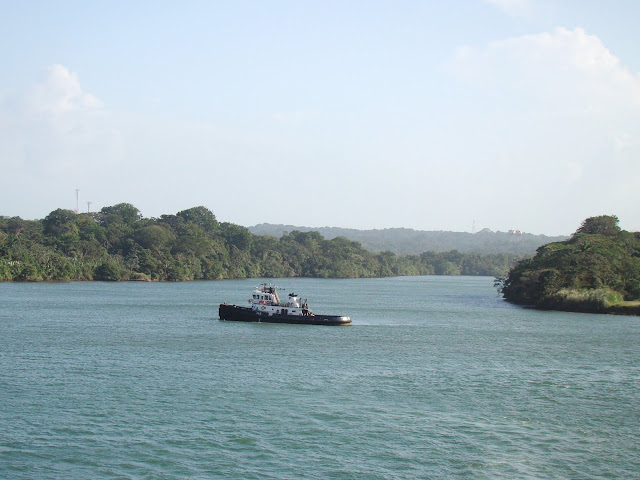 By 4:15 the pilot boat came alongside to bring back our ship’s photogs that had been shooting from the locks & to p/u the pilot that had lead us through the last set of locks. And shortly, we were out in Limon Bay w/ the industrial port city of Colon on the starboard side. 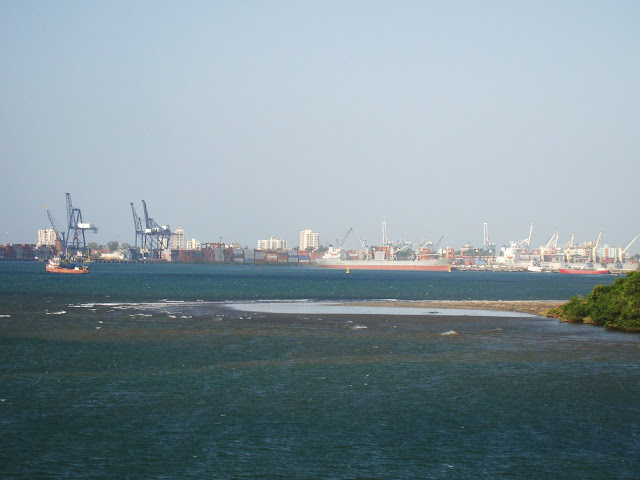 I know earlier today I promised I would not go into great detail about this canal transit; but I LIED! The day was so gorgeous; & I was able to see things that I missed before. And I wanted to at least share the photos w/ you, if not the additional commentary.

About 4:30 the Capt. made an announcement stating we should expect choppy seas this evening. There had been high winds off the coast of Panama & Columbia for a few days. And we will be meeting the wind head on. Looks like I might get my wish for a bumpy ride for a day or two. Yee-ha!

The Cruise Critic “Meet & Mingle” Party was at 5:30 up in Palm Court. It was about this time that the ship really started rocking; & you could feel it best all the way forward on deck 12. I’m one happy camper. When I arrived one couple was already there. Jerry & Gloria (who post under the name of “sobeso5”). In a little while “Aunty Pat” arrived. Gary Hunter attended, as did Jamie Brown (Cruise Sales Consultant)& Corey (Shopping Director) for a short while. (Corey said he saw on the CC boards that the M&M was this afternoon; & so he sort of crashed the party. It was nice of him to want to do so.) And that was it; another small group of 4. Harvey (“Alka”) was absent. And I saw Lynda earlier in the afternoon; & she said she & Spike were coming (“either-oar). I’ve still seen no sign of Dave (“Crystal Kid”). And my new to Crystal friends, “africabound” did not receive an invitation. I later discovered how the error happened (he failed to sign up for the M&M). We had a lively discussion about world travels & our love for exotic places. Gary kept us entertained w/ stories about his adventures in Rwanda. Nat was serving drinks; & he took a few candid photos & then we posed for a group shot before Gary had to run off for a quick bowl of soup before the evening show.

Pat & I stayed around another half hour or so talking travel business stuff. I really enjoyed getting to know her. 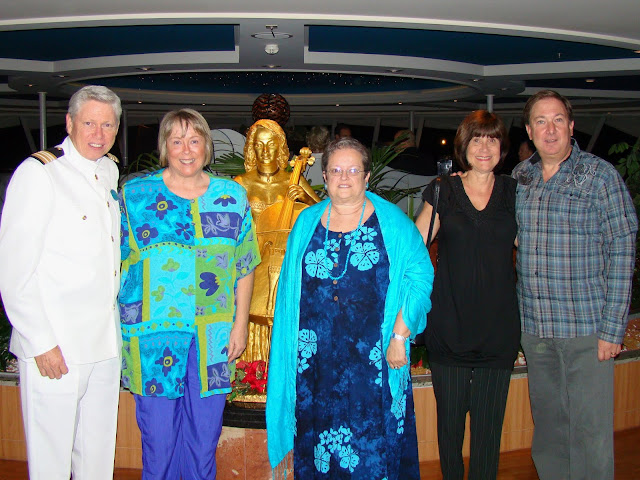 I had made reservations for John, Outi & Ashling (“africabound”) to join me in Silk Road at 7:30. We had a fabulous evening. We were being jostled around in our seats like turbulence on an airplane. The seas are 8-12’; & the winds are force 5. I made the suggestion that we order the favorite appetizers, “family style”; & we just dove in w/ our chopsticks. We had the wagyu beef w/ jalapeño salsa, grilled eggplant w/ miso sauce, lump crab w/ scallions & a spicy sauce, vegetable spring roll w/ Nobu salsa. I stuck w/ my old standard, lobster stir fry w/ garlic, asparagus, shiitake mushrooms, snap peas & truffle-yuzu sauce. For dessert, my beloved lychee sorbet. Ashling had things to do & people to see; so she left us old folks at the table. We talked & talked; about the cast system in Malawi, the tobacco business, Madonna’s adoption of a child from Malawi. (Having e-mailed back & forth for many months pre-cruise & the chats we’ve enjoyed since meeting in person, it feels like we’ve been friends forever.) They are truly smitten w/ their Crystal experience; & plan to make an “open booking” while onboard. They are really delightful people; & I’ll be looking forward to joining them for dinner in Prego a week from tonight. 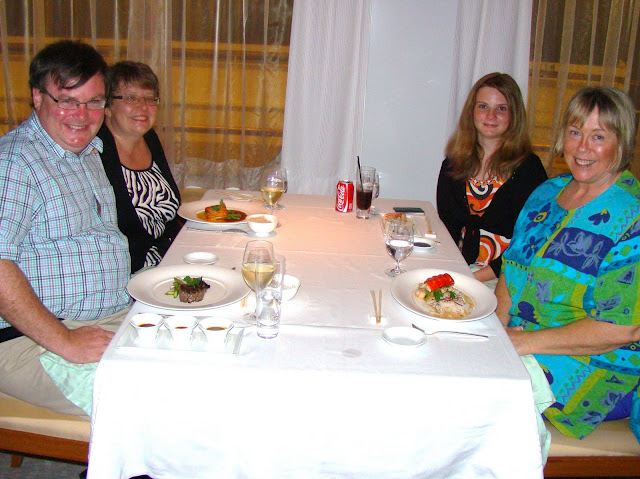 I came back to the cabin & got the laptop & went to the compt. ctr. to borrow the card reader again. I’m going to tell tales out of school here; but there’s something going on between Clark (one of the Lido guys) & Jackie, the darling young lady at the Compt. Ctr. I’ve been noticing Clark “visiting” when I’d walk by in the evenings. I told them my lips were sealed (NOT); & then when I left, I told them not to stay out too late since it’s a school night. [Addendum: I have since learned that Clark & Jackie have a little girl, Cassandra; & he sneaks into the CU@Sea in the evenings so they can see her on a webcam, Isn’t that cute???]

Then I went down to the photo gallery before they closed at 10 to p/u the group photos I had printed for the Lido guys. I chatted a bit w/ Harriet & Seymour outside the theatre while they waited for the next movie to start (“The Taking of Pelham 123”). There was no one at their table in the DR tonight; so they asked to be put at a 2 top; & they sped their way through dinner in an hr.

By 10:30, I was ready for the jammies & to do some computer work. We have to run our clocks forward again tonight. As much as I love the rough seas, there is an extremely loud rubbing/creaking noise coming from my bathroom floor. It’s about to drive me nuts. I don’t think even my sound machine is going to drown out the sound. I’ll definitely have to get out the ear plugs. But as long as I’m rocked to sleep, I can handle the noise.
Posted by Unknown at 2:58 PM