Crystal Serenity-12/9/09
At sea in route to Caldera, Costa Rica

Thank God for Advil PM; I’ve decided I like it better than Ambien. I slept better last night than I have all cruise. Woke up about 6 to go to the bathroom; awake again at 9. Turned on the TV & went back to sleep until 10:15. I feel great. Could part of it be because I DON’T have to pack & leave tomorrow? It’s bad enough that this 9 page “comment booklet” is staring me in the face. I’ve ignored it for 24 hrs. now; & I guess I’m going to have to start work on it sooner rather than later.

I was out the door about 10:45; heading first to the Bistro for capp. There was a line 8 deep (rush hour at this time of morning). I haven’t seen that many people in there, EVER. I took a seat at the bar; & the line kept getting longer. Mario took pity on me; & came over to get “my mug” since I had been waiting so patiently. Then headed up to “Tastes” for a REAL breakfast. I was bad. I had apricot French toast & some bacon. I had my heart set on the PB&J French toast; but they aren’t serving it this cruise.

I was watching many of the passengers handing tips to the Lido guys & saying their goodbyes. It made me very sad even though I’m not going anywhere. It’s so easy to get attached to this crew. They are genuinely remarkable; not overly patronizing as I’ve seen on other cruise lines. I observe so many passengers who bark orders at the crew, some never say “thank you”, some never even looking them in the eyes. I certainly wouldn’t want to be on the receiving end of that; & I try even harder to do just the opposite. I encourage them to talk about their lives & family “back home”. Some even shared their family photos w/ me. This is priceless. I admit to being spoiled; but I refuse to take the stance that I’m entitled to it. I don’t want to ever lose sight of that.

I went “home” to TRY to upload photos to the blog. I kept getting Windows errors & had other connection issues. Wasted over an hr. & only managed to get 5 photos uploaded. This being futile; I decided to fill out the customer service questionnaire. I would prefer to only fill out one, when I finally disembark in MIA. But it wouldn’t be fair to postpone giving positive comments to those who have done such an outstanding job so far. Well, that took about an hr. The Lido buffet would be closing in 15 mins.; so I went up even though I wasn’t that hungry yet (God forbid I miss a meal).

When I walked into the Lido, I spotted Ross (who used to serve w/ the other Lido deck guys). I couldn’t believe that 10 days has passed; & I didn’t even know he was onboard. Of course, had I gone to the evening shows, I would have seen him in the Starlight Lounge (where he does bar service now). He looks just the same; & he welcomed me w/ a big hug. He insisted that he walk through the buffet line w/ me & carry my tray (even though that is no longer his job). We chatted a while. He asked me if I knew “John” who posts on Cruise Critic. He said “John” had been onboard about 3 weeks ago. I asked if knew what John’s “screen name” was; & he couldn’t remember. I know if I look back at the CC boards, I will be able to figure out who he’s talking about. I haven’t taken the time to go on CC in about 36 hrs; & haven’t been on the NutriSystem boards in about 4 days. (Although the way I’ve been eating, it would be a sacrilege to even visit the NS boards.) 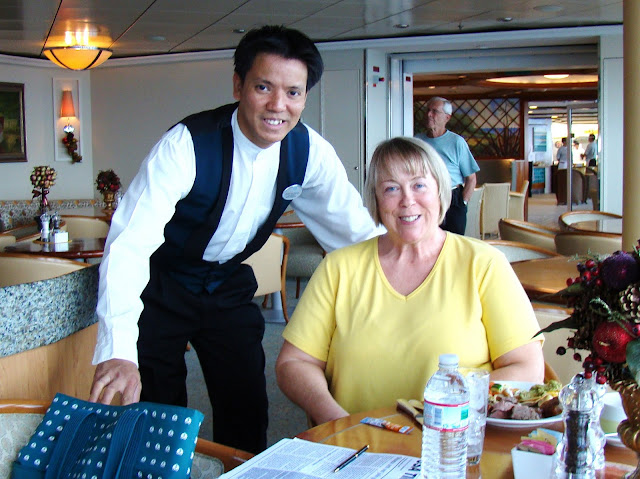 Lunch had some very good things; & some not so great things. The Mexican spicy corn & tortilla soup was fabulous; as was the chicken enchilada w/ spicy cream cheese sauce & guacamole (I should have just had several of those instead). The garlic & rosemary spiked baby leg of lamb tasted, “mutton-y”. There was a tiny pork cutlet that was stuffed w/ herbed mushrooms & wrapped in prosciutto. It came w/ a gorgonzola sauce on the side. It sounded like a good idea; but it must have been sitting on the table too long. It was flavorful; but a little tough. I picked up some lychee sorbet & brought it back to the cabin. 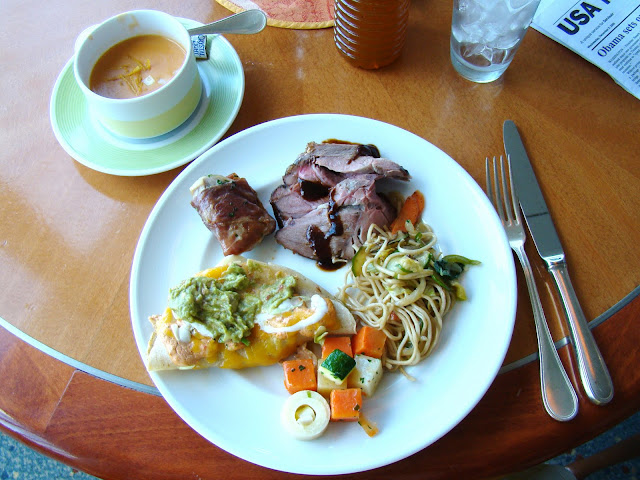 I attempted to upload photos again; but the internet was just too slow. I did finally check my e-mal. There were 247 e-mails (including spam). I nearly made myself dizzy scrolling through trying to weed the good stuff out of the “junk”. I could feel a nap creeping up on me; so I laid down for about an hour. I was awakened by the sound of drawers opening & slamming shut in the cabin next to me. I recognize the scenario. You’re packing to go home; clearing out one drawer at a time. You slide the closet door open; empty it; shut it. Then you go back & open & close every drawer (5-6 times) to make sure you haven’t forgotten anything. Open & close the closet door again. This will be repeated later tonight & again tomorrow morning – in the cabins on either side of me. I do it myself; but not today. And especially not while I’m trying to nap.

Catherine knocked & wanted to know if it was okay to come in & put up the new curtains. I had noticed plastic bags draped over the handrail up & down the hallway all afternoon. Crystal has decided that the beige sheers needed to be retired. I watched as she climbed up on the sofa & the desk chair hanging the new ones. Granted the old ones were a little haggard looking; but I’m afraid these new ones are “butt-ugly”. They are a champagne colored gossamer sheer w/ vertical gold pin striping. I get it-the gold pin stripe compliments the blue & gold striped drapes. I can’t go so far as to say they look “cheap”; but I will say they don’t look “expensive”. Enough said.

I dressed for (casual) dinner. Left a little early so I could stop in Prego & ask Bruno to make some alternative dining reservations for the next cruise. I booked tables 2 nights in Prego & 2 nights in Silk Road. I carried my cust. svc. questionnaire to the Reception Desk. The Crystal Cove was really rockin’ w/ pre dinner dance music. The Galaxy Orchestra was playing swing music; & the lobby floor was packed. A lot of whoopin’ & hollerin’ going on. They kept asking the band to play another one & still another one. The DR doors were opened; & nobody was making any movement in that direction. It was as if they wanted to live in that moment forever & postpone that inevitable stroll into the final dinner.

This would be our last dinner w/ David & Kate; but we didn’t realize that Joan was getting off tomorrow. All of us had misunderstood, thinking she was returning to MIA w/ the rest of us. She was…different. But, we’ll manage somehow w/o her. Boris highly recommended 2 of the appetizers tonight; & I took his advice. I started w/ a tiny puffed pasty that was filled w/ a ragout of morel mushrooms, diced chicken & asparagus. It was magnificent! That was followed w/ 3 jumbo shrimp that had been wrapped w/ prosciutto, drizzled w/ lemon aioli sauce & a little bowl of fruit salsa on the side. Awww, that was to die for. I would have loved a whole plate of those things as my entrée. And I’m sure I could have gotten it if I had asked.

My main course was peppercorn crusted broiled wild salmon w/ a red wine glaze. It came w/ garlic mashed potatoes, smoked onion puree & sautéed spinach. They brought around some braised red cabbage, which was divine. The salmon was pretty good; but I wasn’t so much in the mood for it. I chose it because it sounded better than duck, sirloin steak or sweet & sour pork. With the exception of the appetizers, this was a weak menu. One you would expect them to start off w/ early in the cruise rather than one to leave a lasting impression with. I suppose that’s just a matter of opinion-MINE.

Joan had preordered her favorite dessert for the table, Salzburger Nockerl. This very pretty Austrian dessert is created on a base of lingonberry jam & strawberry cream & topped w/ a browned meringue. It’s served w/ a little vanilla ice cream; has a nice flavor. But to me, it’s like eating baked Alaska (too much fluff & no substance).

I took a small taste of it just to be nice; but something else on the dessert menu caught my eye. It was called “Bridge of Americas”; a trio of dessert samplers on a lovely long rectangular dish. There was a tiny shot glass of frozen sour cream yogurt (unusual, but doable). Another was a 3” long piece of oven roasted banana (in the skin). I can only say it was weird. The best of the 3 was a tiny chocolate cake that had been infused w/ cream. When you chewed it, it exuded a sweet liquid. It was simply orgasmic! David, Kate & Joan excused themselves so they could finish their packing; & we said our goodbyes. Harriet, Seymour & I sat a while & talked. We have learned that there are about 100 of us that are staying onboard for the next segment. There should be about 550 of us going back to MIA. And according to our waiters, Boris & Petar, we are supposed to be at the same table w/ the Chief for the next cruise. That would surprise me because I would think they would want some of the new passengers to experience this “honor”. But we will find out tomorrow when they deliver our new dining cards

It’s 12:30 am; & I’m beat. I’m frustrated w/ the internet. And as much as I hate disappointing my friends who SAY they can’t wait for the next installment, I’m going to wait & try again tomorrow to get the corresponding photos along w/ the written word. The earplugs are going in cause they may be making noises in the hallways picking up the luggage during the overnight hours. By the time I get up & about tomorrow, there will be so many new friends to meet.


And last, but certainly not least....a photo of all the Lido "cool guys" that I took yesterday. Wanted you to be able to put a face w/ the names I've been dropping this whole time. 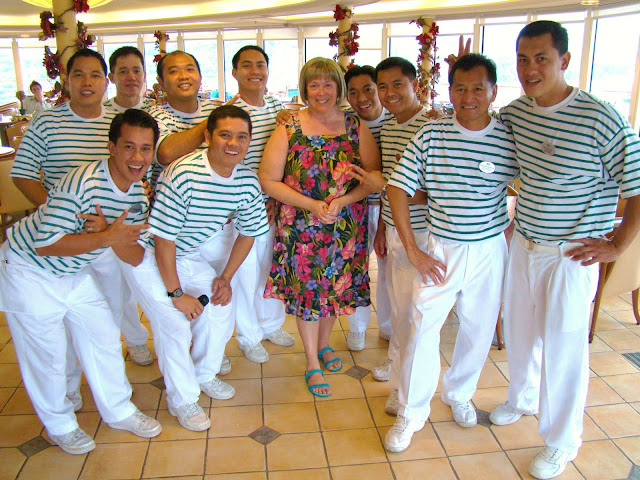