I slept pretty good last night. I was aware when we stopped moving around 3am. But I must have been dead to the world when we moved to the dock sometime between 6:30 & 7. Given the position we had at the pier, there must have been some serious bow thruster maneuvering. I turned on the TV a little before 9; & saw that we were surrounded by ships. We must have been the first one in because we were backed in, towering over the shopping complex. Facing our bow was a smaller ship that had no visible markings (from this angle, anyway). I later learned that it was P&O’s Oceana. 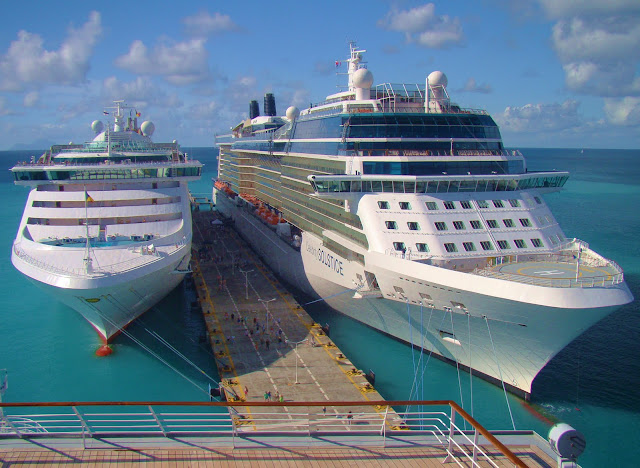 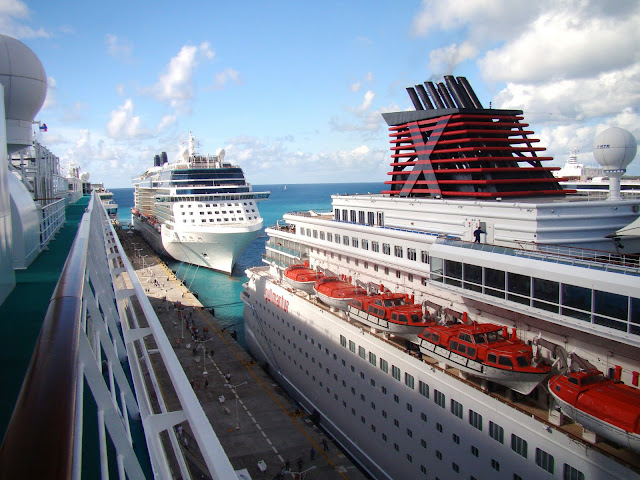 Directly on our starboard side was Pullmantur’s Pacific Dream. Behind them was the Celebrity Solstice. And on the outside next to the Pacific Dream was Holland America’s Westerdam. Five ships on this small island. No way, was I going out in that. From the aft deck, there was a sea of people scurrying down below. It was hot out there; & most everyone who did go out came back saying it was “madness”. 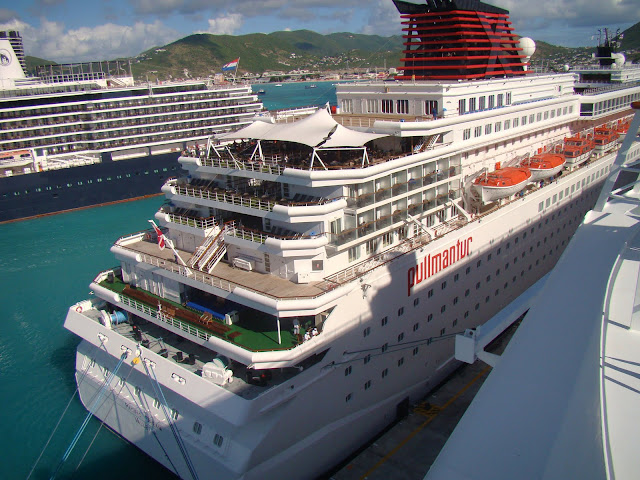 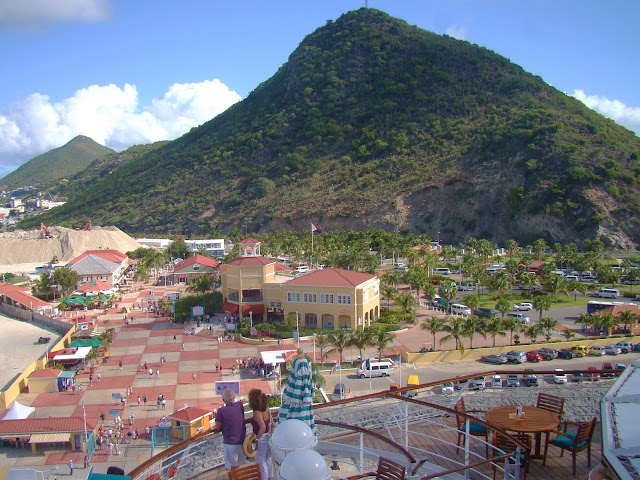 I went up & took some photos while the sun was still low in the sky. I noticed a tanker was butted up against our starboard side; we were “bunkering” fuel for the remainder of our journey. The color of the water here was more beautiful than at any other island we’ve visited thus far. I don’t remember the water ever looking like it did today. Maybe it was reflecting the blue, blue sky or maybe it was just the time of day. 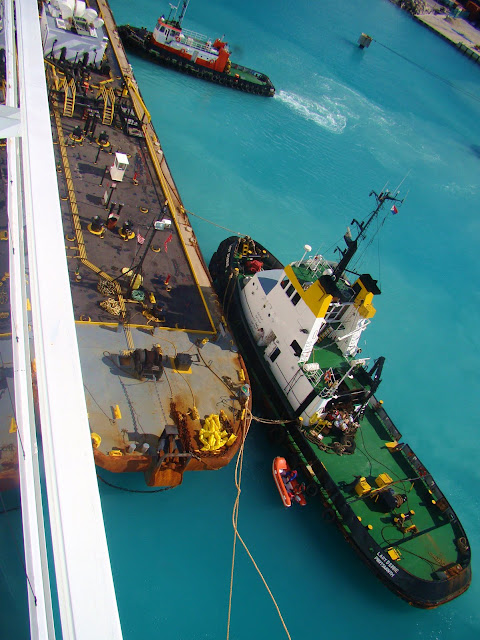 I went down to the reception desk to do a little business; & then spent many hours in the Bistro. Mario was off today; & Rodin got my (decaf) capp. I sat at the far end of the bar; plugged in the laptop & started to work on a Panama Canal “research paper” for Ashling. Since she’s been having such a good time onboard watching DVD’s, taking Spanish & bridge lessons; she just hasn’t had the time to work on that paper she’s supposed to turn in when she goes back to school. Since I had done the research & thoroughly covered it in the blog, it was going to be easy to copy & paste it into a document that I could e-mail to her. At least it was SUPPOSED to be easy. When I started typing, it dawned on me that my writings were from the perspective of a westbound canal transit. She experienced it in the reverse direction. Now, this shouldn’t present a problem for most people. But anyone who knows me, knows that I don’t “do reverse”. You give me directions to your house or even draw me a map……I can’t find my way home. I just can’t think backwards.

I thought maybe a 2nd cup of decaf might help. I just couldn’t make my “vacation brain” follow the trail of bread crumbs. One of the Bistro waiters, Stefan, suggested that I try a cup of ginseng tea. He says it’s very good for concentration. Well, I can’t say that it cleared away the “fog’; but I did tell him that it was helping. It helped so much that as soon as he left on his lunch break, I took a break. It was nearly 1pm; & I was more than ready for my first meal of the day.

I went up to the Lido buffet. The first person I saw was Bruno Marques (the specialty restaurant Maitre d’). He says “good afternoon, Mrs. Thomas”. I have no clue who Mrs. Thomas is; but he’s been calling me that since I dined in Prego 10 days ago. I don’t have the heart to tell him otherwise.

There were several delicious things on the menu. I had a sage & garlic rubbed roasted chicken thigh & a taste of the Korean beef w/ scallions & sesame seeds (both quite good). I had a piece of grilled bratwurst w/ sauerkraut & the most divine sautéed potatoes w/ onion. Chester, the “pasta man” made me a small portion of spaccatelle capriciosa. I wondered what the hell it was too…….the pasta looks just like the “bat” they use in jai alai (if you don’t know what that looks like………think of a dugout canoe). The pasta was mixed w/ tomato sauce, ham, artichokes, olives, mushrooms, mozzarella & oregano. Oh, boy was that ever good.

The buffet was closing down; & I moved out to the Neptune Pool for some lychee sorbet & to work sudoku puzzles that had begun to stack up. It was very noisy out there. Dave (“CrystalKid”) was sitting w/ a group of friends; & they were telling story after story & bursting into loud fits of belly-laughter. After 6 hours outside my “cave”, I was beginning to long for the quiet solitude of “home” & maybe a nap. Knowing that this peaceful adventure is coming to an end soon is causing a renewed desire to hibernate while I still can. With Josie not doing well at home, I’m not sure what to expect when I get back there. I closed the drapes & laid down. Took me a while to turn my mind off; but I did get about an hour’s nap.

I woke up at 5 thinking it was time to set sail. But we didn’t depart til 6. The Westerdam must have left about 5; & the Oceana backed out just before we left. The three of us formed a procession as we sailed off to the northwest. As the Serenity was slowly passing by the Solstice, the steady pop of flashbulbs coming from every deck was almost blinding. It reminded me of the paparazzi along the red carpet at a movie premier or the academy awards. If I had been on the Solstice I would have wanted to take pictures of the Serenity as well. She was the most beautiful vessel in St. Martin today (or any other day for that fact).

It was casual night & a good menu in the DR. I showered & washed my hair. Determined to show up for at least one meal w/o the wig, I worked extra hard on the hair tonight. And it only looked so-so. At the table nobody said a word. Maybe they didn’t notice the difference……or, maybe they now understand why I wear the wig! Barbara & Alan ate elsewhere. Bryn & Allen & Natalie & David were all abuzz about their American’s Cup sailing excursion today. They had a fabulous time, even though they did lose the race. Their sail “broke” during the race; but that didn’t seem to put a damper on the experience. From what I hear, Allen was the master grinder. Bryn & David were the main grinders; & Natalie tended bar (in other words she retrieved drinks from the cooler). When Harriet & Seymour came by the table, they were talking about WINNING the race. So, it turns out they were competing against my tablemates. Harriet played “bartender” on their boat. I have to admit I would have loved to see Harriet & Seymour on a sailboat.

Finally, I got to sit next to Fran during dinner; & we got along famously. We chatted a lot about familiar things in Naples, our hobbies & charities. Coincidentally, she used to live right down the street from where (I think), my cousin, David & Barbara are living now. Our birthdays are May 10th & 11th. She’s a “cat mother, to ragdolls, which she’s missing terribly. She’s good friends w/ one of (cousin) Lolita’s good friends at Bentley Village. I thoroughly enjoyed having the chance to get to know her better; & hope that our paths cross again at home & at sea.

Now, let’s get down to food……dinner was really good tonight. I started w/ an appetizer of roasted portabella mushrooms on a small bed of field greens, drizzled w/ garlic dressing & a tomato topped crostini. Fran talked about how she loves the fried cheese balls that come w/ the salad; & that sounded good to me. So, I ordered a simple hearts of iceberg lettuce salad that had artichoke hearts, tomatoes, green olives w/ bleu cheese dressing. The small fried (mozzarella, I believe) cheese balls were divine. She had asked for extra; & I wished I had. So, she reached over & gave me one of hers. Soon Boris came out w/ a few more in a bowl. They would have gone completely unnoticed, if she hadn’t brought them to my attention. Being the insatiable carnivore that I am, I went for the thick slab of rare prime rib. I had to cut away a good bit of fat; but that made it that much more flavorful. It was delectably tender, accompanied by pungent ground horseradish. It was served w/ a baked potato & a concoction of pureed cauliflower & carrots that had been molded into a small “flan” type container before it was plated. I was pleasantly stuffed. “Tall” Peter was making crepe suzette tableside; but I passed, choosing a trio of cheese instead. One was a camembert; but the other 2 were new to me (of the same, mild nutty flavor that I prefer). Boris came right away w/ the fruity condiments. They had the marinated raisins (“mincemeat”) & the apricot preserves. I’m really enjoying the ritual of ending the meal w/ cheese.

We were just finishing about 10:30; & everyone was rushing off to the show. I came back to the cabin for my laptop & headed to the compt. ctr. to transfer today’s photos. While I was there I had a nice conversation w/ Lynne & Gay (whom I had met in the Bistro 2 days ago). They were checking their business e-mails. I was back “home” about 11; & got comfy. I worked on the computer til after 2am; & then to bed to read for a while. We have a mighty distance to cover before arriving in Grand Turk Sat. morning. We’re really moving tonight; & I can feel a comforting “shimmy”. Seems like a recipe for a good night’s sleep……
Posted by Unknown at 11:14 AM