Like I mentioned yesterday, if I place an advance order for room service breakfast, I’ll wake up hours early waiting for it to come. So, today, I didn’t place an order; & I was happily sleeping til after 10 am. After checking the weather & news, I opened the drapes; & it was blindingly bright outside. Looking off the starboard side all I could see was water in differing shades of blue & green & one tiny little mound of an island. That meant that the port side view would consist of rows & rows of intensely pastel painted buildings w/ intricate white details characteristic of the island’s Dutch influence. I love the architecture of Aruba & Curacao. It’s happy! Once I stepped outside in the heat, I knew it would not be so “happy” on the streets of town. There was a huge Holland America ship docked behind us (Zuiderdam); & there would be large masses of people on this Sunday morning. They advised us that the shops (by law) could only be open 4 hrs on Sun. So, some were opening at 9 & some at 10 in order to maximize the shopping time. 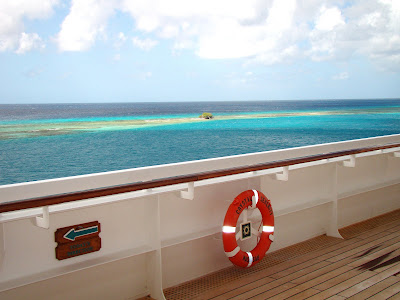 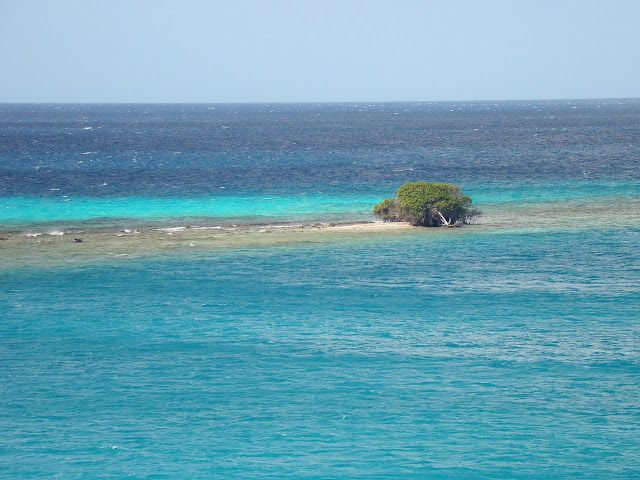 I made myself slightly presentable; & went down one deck to the Bistro for my capp & to get some yogurt & granola to go w/ the stash of raisins that’s breeding in my fridge. They had yogurt; but no boxes of cereal. For that you’d have to go up to the Lido deck buffet, which by this time is already closed. I was “forced” to get some cheese, fruit & smoked salmon. Carried it back to the cabin & cranked up the compt. I watched my tablemate/friend, David’s, talk on TV entitled “Why can’t int’l law stop (sea) pirates”? Not something we have to worry ourselves about in the Caribbean Sea; but certainly a topic that we all think about. Foreign oil tankers & a few private boats that might (& do) get hijacked are of little interest to our governments. Now if it were a cruise ship full of US passengers that might get some attention. The pirates bring “money” to their local governments “kitty”; so the local government sees no incentive to try to stop it (corruption pays). Then there’s that imaginary line drawn in the water designating “int’l waters”, that no one seems to have jurisdiction over. There isn’t enough military power available to escort your passage through; & it’s not feasible to string up barbed wire around all the open decks to prevent them from climbing up over the railings. Until the day comes when passengers can arm themselves w/ assault weapons, it’s “open season” on ships in certain parts of the world. Remind me to stay away from the Sea of Adnan.

When Catherine came in to check on me, I told her I didn’t need anything except ice. I told her to take the rest of the morning off. She smiled her cute little Asian smile & said, “I can’t….I have to go to a seminar to learn about ‘bed bugs’.” I assured her that there were none in 7073. There is a ravenous mosquito that’s been hanging around since MIA; but no bed bugs (I already checked). 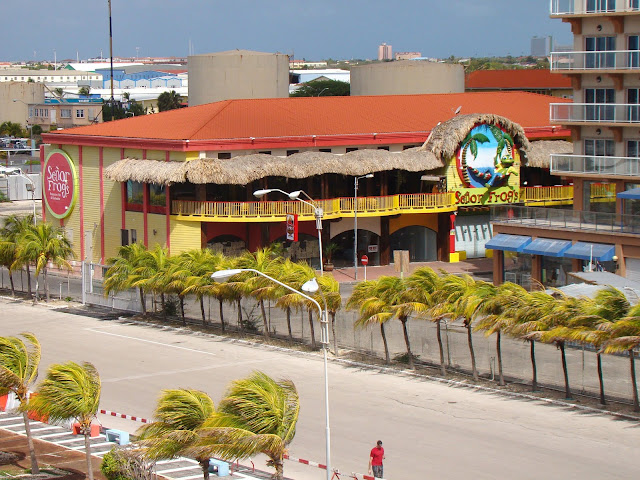 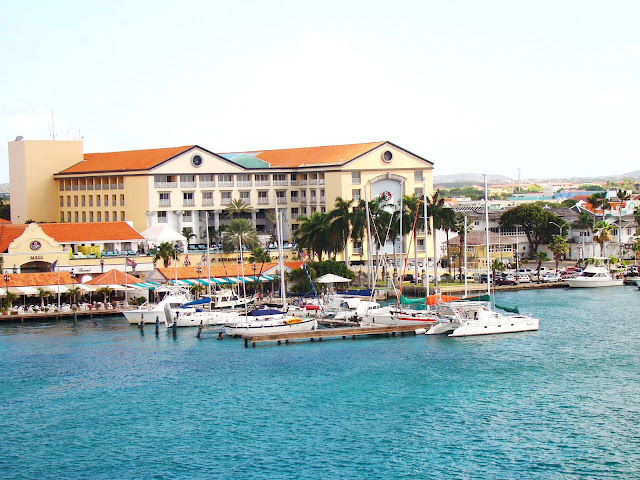 Well, by now, 12:45, I knew there had to be lunch food somewhere. The DR lunch menu had a few good things on it that I was sure would also be on the Lido buffet. So, I headed there; but got sidetracked on the way when I saw David & Kate having lunch at “Tastes”. I sat down to ask them about their shore excursion, helmet diving. They had great fun; said there was a reef that had been created from submerged vehicles & such that was teaming w/ colorful fish & pretty coral heads. We talked so long that by the time I made it back to the Lido buffet it was completely bare (nobody in sight). So, I figured I’d get another dose of lobster/melon gazpacho from “Tastes” & have (Wolfgang Puck’s famous) Chinoise Chicken Salad. The salad was as delicious as always; & I had to chuckle when I dug my spoon into the cup of soup. Whoever made it today, had the cantaloupe & watermelon in perfectly round, microscopic “balls” (rather than diced). Didn’t taste any different; but it might have earned “brownie points” for an aspiring prep cook (w/ too much time on his hands).

I got some of the lychee sherbet from Christian; & went out to the open deck all the way aft to place a few phone calls. I felt the need to reach out & touch someone today. I called Josie, which surprised her to no end. I just wanted to make sure she was doing okay; & she is. Then I tried unsuccessfully to call Michael. I wanted to call Monica & Dave but didn’t have her cell phone # programmed into my GSM phone. 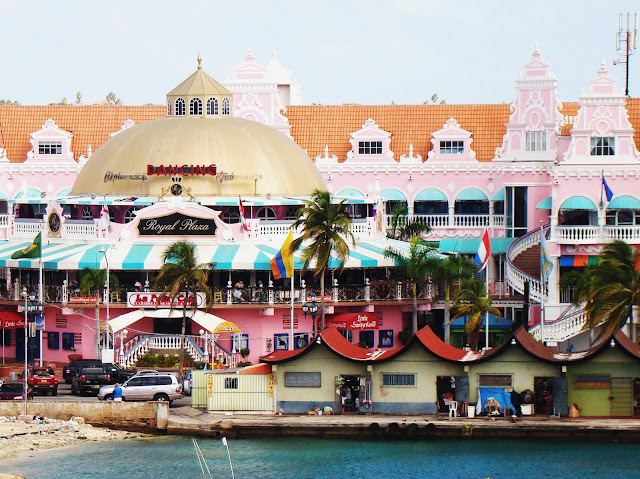 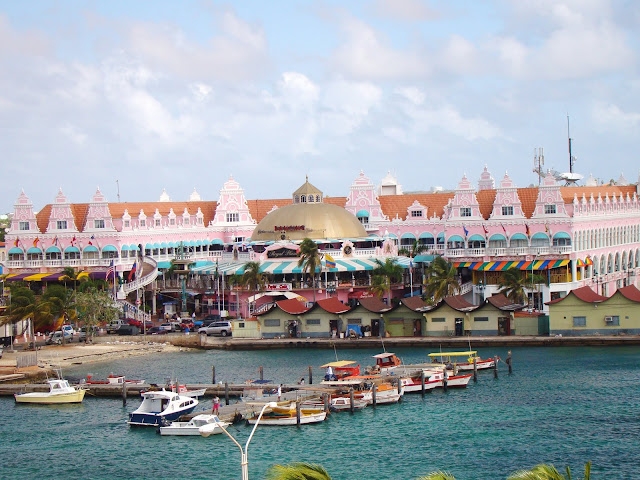 I went home to work on the blog; & to the compt. ctr. to transfer photos to my compt. Pretty soon the Capt. came over the PA system to say that we were about to get underway (so Louis would be singing soon). It dawned on me that I have Monica’s # stored in my US cell phone; so I copied it down & ran out on deck to give her a call while we were still in range of the island’s satellite signal (much cheaper than using this ship’s satellite connection). We just pulled away from the dock; & as I was telling her how beautiful the scenery was, when Louis started singing “Wonderful World” over the PA. It just added to the excitement of the call, as if she were sharing sailaway w/ me. It’s a very moving tradition that I hope Crystal never changes.

Tonight just about everyone at our table had alternate dining plans. I had signed up for the “Table for 8” service in Prego (the Italian restaurant). Crystal tries to arrange one night in the alternative restaurants to host a large table so that people who are traveling solo can feel free to come & dine as a group. The designated reservation time was 8:30, my normal DR sitting time. It’s casual night; so it didn’t require a lot of work. BTW, did I tell you today how much I ADORE having a wig???

There obviously was little interest in the solo dining in Prego; because I was the only solo that signed up. But a lovely couple from Toronto told Bruno (MD) that they would be happy to have me join their table. And I enjoyed their company. David Juvet & his wife, Mary Martin, both were/had been attorneys. She has since become a writer having published a few books of fiction & written a screenplay (nothing that I had heard of, but that’s not a stretch). About halfway through the meal, friends of theirs came in & had coffee while we finished eating. Turned out this couple was Dr. David Shilotan & his wife, Fay. He is a noted retina specialist from Cleveland Clinic (OH); & he’s been a guest lecturer during this cruise. I haven’t attended in person; but I have seen his talks replayed on TV. Turns out Fay is also a writer/screenwriter. A good bit of the conversation was political & over my head; but the ladies stories of publishing & rubbing elbows w/ the Hollywood set was quite interesting.

Oh, I forgot to write about the meal. Everything on the Prego menu is fabulous; & I take forever to make up my mind. I did request, as soon as we sat down, a special order of bruschetta. It’s not on the menu; but I have learned over the years that they will make it upon request (what good Italian restaurant wouldn’t?). When they brought it out, something just didn’t look right; one taste & I had to say something. The bread was not properly toasted first & there was no garlic flavor. I kindly asked if they could remake it. This time it came out (almost) perfectly. I don’t know if the chef in Prego would prefer NOT to take special orders, because this has happened on the last 2 cruises. They never get it right the first time or two; but eventually they hit it out of the ballpark. I won’t give up asking; because it really is (can be) that good. The chef always sends out a special appetizer (that changes daily). Tonight it was a sliver of beef carpaccio shaped like a coronet w/ green asparagus spears & aioli sauce & pesto. Beautifully presented & tasty. I seem to order the same thing over & over because I know it’s good; & I just can’t make a decision when it comes to all the other yummy sounding things on the menu. So, my other appetizer was 3 pan seared sea scallops over a bed of wild greens & a balsamic dressing; followed by Caesar salad. And for the main course, (for the 2nd night in a row), I had the baby lamb chops w/ black peppered rosemary sauce. I think they’re especially good in Prego because of the sides that accompany it. Garlic mashed potatoes, sautéed mushrooms & cherry tomatoes. I also had taken a roasted head of garlic (which they offer along w/ the bread basket at the beginning of the meal) which I added to the potatoes to spice them up even more & to the mushrooms. Nothing quite as good as roasted garlic! And I didn’t waiver from the norm when it came to dessert. My favorite is called Crema di’ Cappa. It’s cappuccino custard served in a tiny demitasse cup w/ a tiny dollop of fresh whipped cream topped w/ a chocolate coated cocoa bean. There is no word to describe how good it is; & the perfect light ending to a heavy meal. The 5 of us were so engrossed in conversation we were oblivious to the fact that we were the only ones left in the restaurant. Although gracious, I think the staff was ready for us to leave. After all it was almost 11pm. We said our goodbyes out in the hallway; & I walked the short 30 steps “home”. A little computer work; & I’m (hopefully) sleeping soon. Tonight we run our clocks back to eastern standard time. Sea day tomorrow & then the Canal passage on Tues.
Posted by Unknown at 12:33 PM