Forget what I said last night…..”I can put up w/ a little noise as long as the ship is rockin”. I lied. Neither ear plugs nor the sound machine could cancel out that noise. It’s a cross between a creaking sailboat, rubbing leather & a sea lion bellowing. I’ve determined that it’s not as loud if you’re standing exactly in the middle of the bathroom floor. And I’m sure there’s nothing that can be done about it.

All through the night the ship would “shudder” as if the propeller was lifted up out of the water. I kept waking up when I’d get tossed about in the bed. One could almost surf out there this morning. During the 9am Capt’s report, he said that we’re headed directly into the gale force winds (force 7), seas 12-15’, & we’re running on 4 engines (yet only doing 14.5 knots). No mention was made about using the stabilizers, which might slow our forward progress down to put us off schedule for tomorrow morning’s arrival in Aruba.

Trying to sleep is futile, so I was awake before 8. I prepared yogurt & granola from my “secret stash”. I did a little computer work; & then dressed to do a little shipboard business. 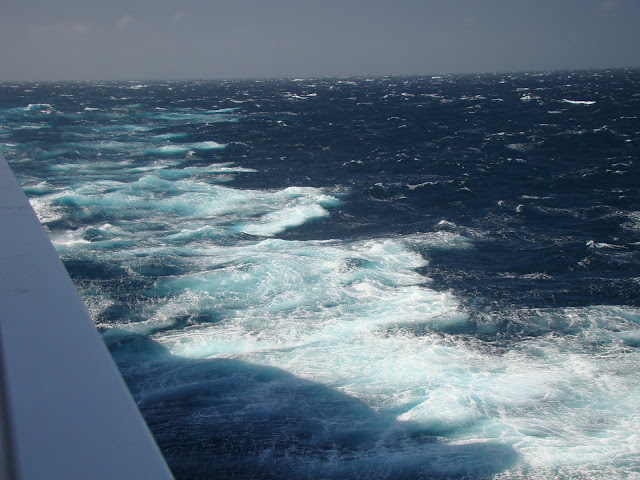 I stepped outside to take some shots of the swells. Then to the Bistro for capp.; to the photo gallery to look at yesterday’s Canal shots. Not too bad; & since I had a coupon for a free photo thought I’d use it on the railing shot going through the Gatun Locks. I stopped into the Capt’s Choice shop to buy some of that wonderful, impossible to find Sure deodorant (too much information, I know). And since Jamie Brown (the onboard Cruise Sales Consultant) was at her desk, I sat down & booked 2 “open bookings” for sometime in the future. In case you don’t know, if you book a future cruise while you’re onboard, you can double the amount of Crystal Society (past passengers) discount. I already have the Symphony booked for next Oct; & have no idea when or where I want to go next. But it’s foolish not to start the booking process. I can make up my mind up to 6 months after I get home; & can always get my $100 deposit back if I change my mind.

Since I was right outside the main DR, I decided to sit down & be served lunch today. The menu looked pretty good; & I wasn’t in the mood to eat from the Asian Buffet that was taking place up on the Lido Deck. A nice, mild mannered waiter named John served me at a 2-top right by the window. I had a beautiful appetizer that consisted of a perfectly stacked round tower of layers of eggplant, & oriental noodles. It was topped w/ a few bean sprouts & drizzled w/ chunky peanut dressing. It was a delicious as it was beautiful. Next, I had spicy Thai chicken & shrimp soup w/ lemon grass. There were big chunks of chicken, butterflied shrimp & julienned carrots. I was sorry I didn’t have the camera w/ me; although I try not to take photos of food in the main DR. My main course was spicy orange chicken. It usually comes w/ sticky white rice; but I asked for it alone. It was very tender w/ lots of orange sauce & orange peel curls. They probably served it up on the buffet; but I doubt that it would have been as fresh & tender as this was. I had a small serving of the nonfat German Chocolate frozen yogurt for dessert. I sat for a long while staring out at the wild waves, whitecaps & sea spray. Very soothing in an unusual way.

I went back to the cabin & watched a movie (Nights in Rodanthe), which I enjoyed. Then I watched 2 lectures from this morning. One was entitled “Anti-Aging Supplements: Fountain of Youth or Snake Oil” by noted Cleveland Clinic Endocrinologist, Dr. Charles Faiman. He covered topics ranging from hormone replacement therapy to prostate disease to metabolism.

The next lecture was on the challenges of “The Presidency of Barack Obama” by Ken Walsh, who is the Chief White House Correspondent for the U.S. News & World Report. It wasn’t what I’d call “in depth”; but it was superficially interesting. The lectures he has scheduled later next week promise to be more “stimulating”.

I had received a “private” invitation that read, “On this Crystal Society Family Cruise, by invitation only, please join us for a wonderful hour of special fun entertainment this afternoon in the Galaxy Lounge”. I asked as many crew members as I could find today, what this “event” was going to be; & no one seems to know. I didn’t want to dress & get out that early unless I knew it was worth my while. I wondered if it was Christmas related. It certainly wasn’t an invite to the Crystal Society cocktail party (which is always in the Palm Court). Hopefully, I’ll find out later exactly what I missed; & I hope it doesn’t turn out to be “life altering”.

The seas have calmed a little this afternoon; but there is still a pronounced rise & fall of the sea on the horizon from my window. The ship’s log on TV says the winds are still at 30 knots, (gale) force 7. The seas are 7.5-12’ (I’d say on the upper end of that). The horrible noise coming from the bathroom floor seems to be less frequent (thank God). Now that I’m aware of the weather front, my slightly drippy nose & headache make more sense – sinus. I looked in my bag of travel medicine; I always carry sinus & cold stuff. I took 2 Tylenol sinus relief; but didn’t notice the expiration date until after I’d taken it…..Jan. 2005; so you think anything bad’s gonna happen? Time will tell, I guess.

Feeling a little punkish, I got a bunch of reading material & climbed into bed about 4pm. I’d snooze a while, read a while, watch HLN a while. I decided that I was going to stay in the rest of the night. I thought I’d get a head start on tip envelopes. I let them put the bulk of my tips on my shipboard account [gotta use as much of that “free money” (shipboard credit) as I can; use it or lose it]. But I had printed special Christmas cards for the crew again this year; & I thought I’d go ahead & make them out & put the extra Christmas tip money in there. I’ll have that unpleasant “going home” task out of the way.

Catherine came in about 7; she was going to dust & vacuum since I had told her to postpone it this morning. When she saw I was in bed, she said she’d wait & do it tomorrow. I asked her if she’d order dinner for me a little later. So in the meantime, I watched a rerun of another lecture on TV. This was a lighthearted look at the art of celebrity caricatures presented by Ken Fallin, who (unbeknownst to me) is a featured illustrator/caricaturist in the Wall Street Journal, In Style, Barron’s, etc. He had a quiz to see if the audience would recognize the celebrities that he showed in a slide presentation. It was fun; I got most of them; & would have won a prize had I been there in person. 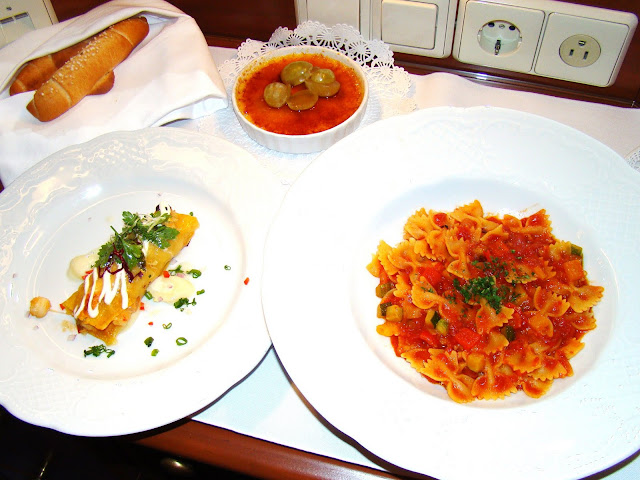 About 8, Catherine brought my dinner; & set it up at the desk. I wasn’t really hungry; but knew I’d regret it later if I didn’t order something. There were a few things on the main DR menu that looked pretty good; & I would rather have that than something later tonight from the regular room service menu. I had a seafood enchilada appetizer that was fabulous. It had baby shrimp, little teensy scallops & flakes of crab meat wrapped in a tortilla w/ lime flavored crème fraiche. I chose the pasta special as my main course. It was bow tie pasta (farfalle) w/ tomatoes, roasted sweet peppers, diced zucchini & eggplant, garlic & provolone cheese. I had this much later in the evening; & it was very tasty (even cold). I ordered the, always delicious, French vanilla crème brulee for dessert.

I was tiring of the computer work & TV (who said that?) So, about 11pm, I went to bed w/ a new book (contemporary romance trash). I lost a lot of sleep last night because of the noise. I hope I’m more successful tonight. Not that I’m ready for this vacation to be over; but I am really missing my bed. I should have asked for an “egg crate” topper to even out the lumpy bed right from the beginning. It’s redundant now. I’ll just suffer for another week. Ba-dump-dump.
Posted by Unknown at 5:58 PM