By 7:30 I knew I wasn’t going to go back to sleep; so I checked the bridge camera, the morning news & read a while. It seems when I put in a breakfast order for a certain time (in this case 9:30), I’m awake long before it comes. I wish there were a way to get a capp. from the Bistro delivered to the cabin. I’ll bet if I were to ask Catherine, she’d do it. But I know anything that I ask her to do only makes her that much further behind in her normal list of duties. These people work their tails off; & what little time they have off duty, they deserve.

She brought my breakfast tray; yogurt & granola. I had asked for some raisins; & she found this big honkin’ bowl full of raisins. There’s so much that I’m going to stash it away in the fridge for another breakfast or three. A little after 10, I made myself presentable cause I really wanted that capp. Surprisingly the hair is still shellacked into a somewhat rounded coiffure; so I’ll forgo the wig, at least until tonight. 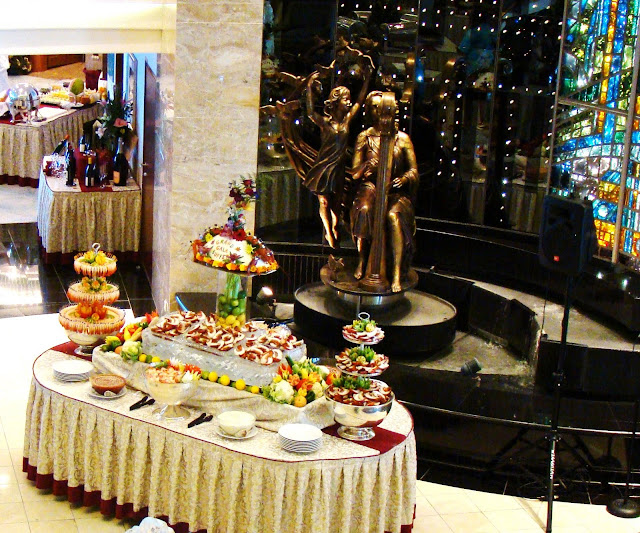 When I went to the Bistro the lobby was already abuzz w/ preparation for the Grand Gala Buffet. Crystal Cruises holds a gala buffet once per cruise, always on a sea day & at noontime. Magnificent displays of breads, desserts, canapés, salads, seafood, ice sculptures & hot entrees & vegetables. They let you take photos from 11:30-12; introduce the individual chefs responsible for all the artistry; & then at noon, we destroy all that work in a matter of minutes. You take what you want; & then seat yourself anywhere in the dining room or around the Crystal Cove lobby or bars. Champagne is served if you like. I got some shrimp, a baby lobster tail, some creamed spinach & a tiny beef wellington. I sat at the bar w/ Joan (from my table); & ate quickly so someone else could sit down (that being a 94 yr old gentleman friend that she’s met-could this be serious?). 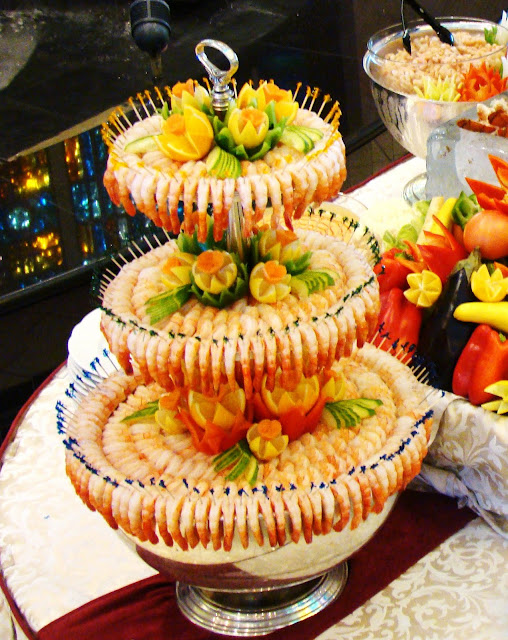 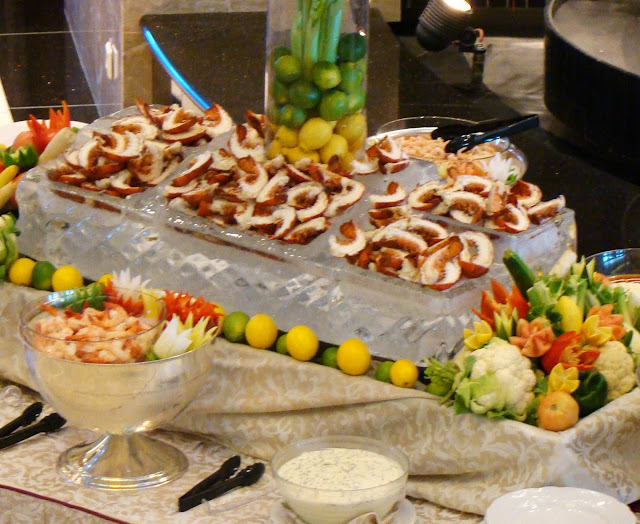 I then proceeded up around the indoor pool to find a cool spot to sit for a while. Within minutes, Clark brought me ice water; Nat a napkin; & various others wanted to get me something from the Lido buffet. I just wanted to read quietly for a while, occasionally getting distracted by some movement out in the gorgeous teal blue water. I finished my book; & by 2:30 I was drooling over the smells coming from the Waves Grill. Clark was probably watching me for some sign; he was there in a flash to ask if I wanted something to eat. He got me a hot dog (w/o bun) & some sauerkraut. Christian said they ran out of lychee sherbet; but more was being made tonight. So, I MADE DO w/ a little ramekin of crème brulee. Man was that good. 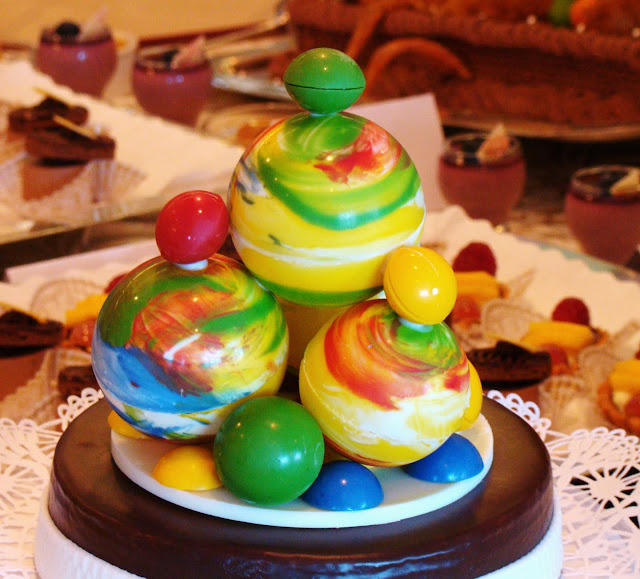 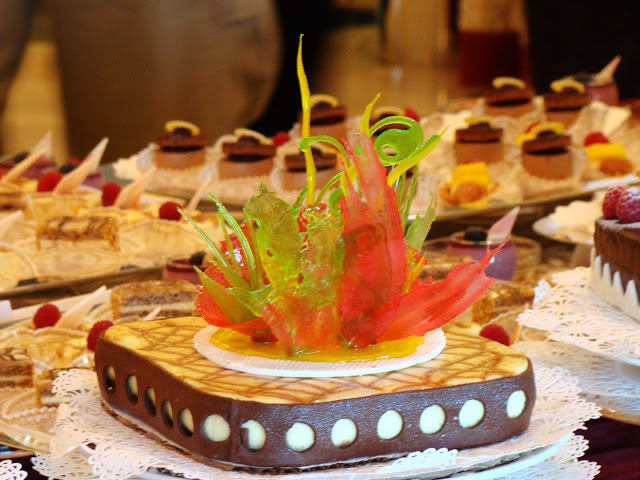 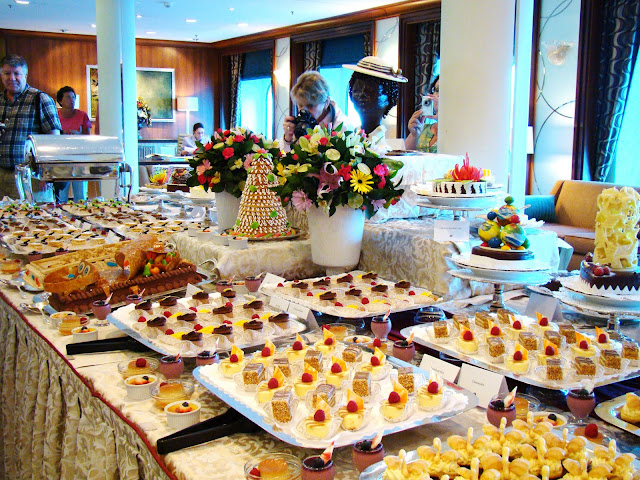 I went to the cabin & picked up my laptop & went to the computer ctr. so I could download today’s photos off the camera to the computer. While there, Ren (former tablemate) stopped by the desk & talked for a while about Sudoku puzzles. Then Pearl (also former tablemate who abandoned us after one night) sat down to talk about her beginner’s computer class. She wants to learn; but Leonard is too advanced to explain it all to her. She finds it all so confusing; so I told her about the “Dummies” series of books. She watched intently as pictures flashed across my screen; amazed at how fast “I” was. I had to tell her I wasn’t doing anything; the computer does it all by itself. I tried to convince her that the damn thing still frustrates me to no end. You know what I find fascinating? Why is Pearl all of a sudden being so friendly, when a week ago she didn’t want to dine w/ me/us? 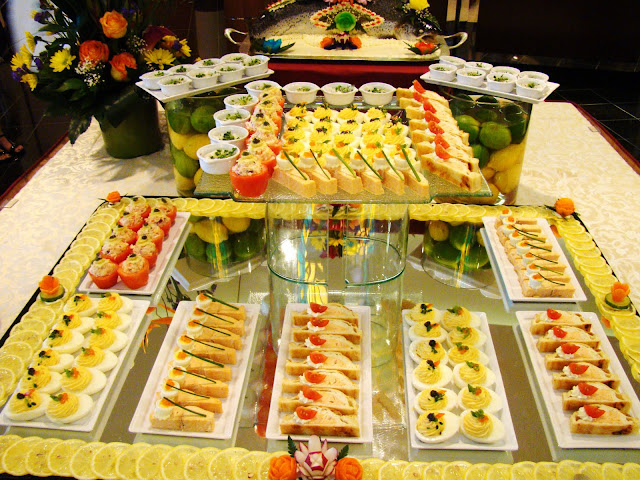 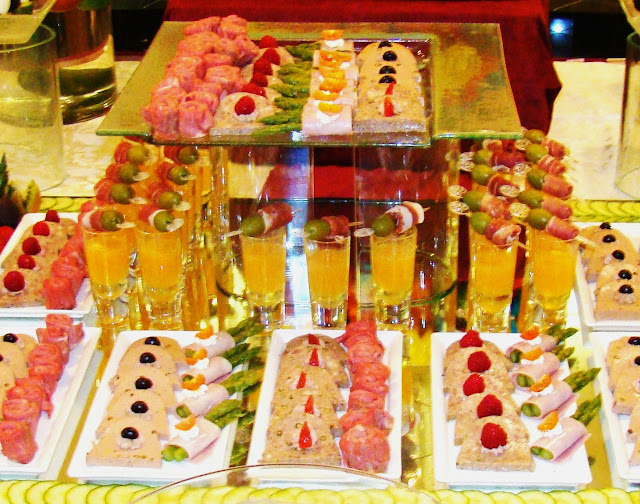 I came “home” w/ the intent of taking a nap; but I got involved in photo editing. The next thing I knew it was 6:40; & I needed to shower & dress for the Crystal Society (past passenger) cocktail party. It’s semi-formal night; & Ioannis (our chief engineer) is dining at the table w/ us again tonight. I actually made it to the Palm Court for the cocktail party a few minutes early. I sat w/ Harriet & Seymour; we were served drinks & appetizers while the dance band played. The Ambassador Hosts were circulating asking all the single women to dance; I passed. But Harriet can’t get Seymour off his duff; & she asked several of the hosts if they would dance w/ her. When the band played “Livin’ La Vida Loca”, a lot of the young dancers on the entertainment staff got up & let loose. Watching them have so much fun, it was contagious. Then the Capt. & other officers spoke & recognized several passengers who were celebrating milestone voyages. There were several on their 40th Crystal cruise; one woman on her 51st; another on her 101st! They mentioned another woman (who did not come forward) who was currently on her 105th. Wow, I should be so lucky…..maybe I can find some old, rich geezer who can get me there. 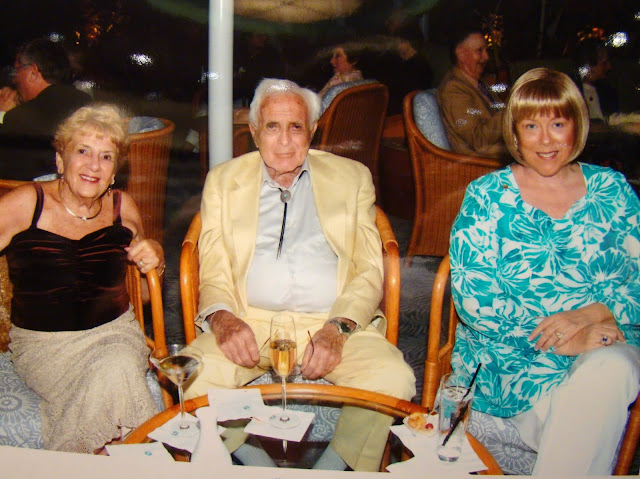 Down to the dining room where it’s French night (one of the best menus IMO). Ioannis was a little late; but since he “buys” the wine for the table, he gets a pass. He looked especially handsome in his “dress whites”. He chose 2 French wines tonight (of course); one was a Pouilly-Fuissé which I kinda liked. The other was a Bordeaux (pucker up). We all seemed to gravitate to the escargot bourguignon as an appetizer. They were to die for; especially sopping up the garlic butter w/ the salt bread sticks. The pasta course always sounds so good; & I had to have an appetizer portion. It was a paccheri (long, flat & hollow) pasta w/ wild mushrooms, pancetta, onions, tomatoes, cream & truffle oil. And most of us chose the roasted rack of baby lamb for our main course. Three petite chops that were garlic herb crusted & came w/ gratinated potatoes, green beans (or as they say in France, haricots vert) & the most orgasmic ratatouille. Ioannis kept us entertained w/ stories about how long it takes & how hard it is to get your various levels of marine certifications in Greece. And I was surprised to learn that he is responsible for preparing the Serenity’s marine budget every fiscal year. In fact, a lot of the Crystal Big Wigs are onboard this cruise; & he presented the 2010 budget to them today (their fiscal year runs from Mar-Mar). Who woulda thought??? This conversation took place during dessert. Most of us had the grand marnier soufflé w/ a vanilla sauce & a shot of grand marnier. It was good; but the tiny vanilla filled profiterole w/ a hard caramelized sugar coating on it was da bomb!

Everyone (except me) made a beeline to the show (musical revue entitled “My Favorite Things”) at 10:30. I headed home; way more than tired. It’s at this point during a cruise when I really start getting comfortable w/ being away from the responsibilities of home. And usually, it’s at this point when you realize that it’s almost over; & you have to start thinking about such things as tip envelopes, customs forms, packing & saying your goodbyes. My journey is only one third “over”. I can’t tell you how thrilling that feeling is for me. I think of my friend, Ann, who will be embarking on a world cruise on Serenity in Jan. What it would feel like to have 3½ months to “settle in”. One hundred plus days to eat like a “piggy”, be spoiled “shitless”, reflect pensively on life’s events.

This afternoon, I was staring out at sea; watching flying fish happily leaping out of the water, & the seagulls swooping down to gobble some of them up. I have to keep reminding myself not to get bent outta shape, not sweat the small stuff (as I tend to do). You never know if there will be a tomorrow. I’ve been so incredibly lucky in this life. I’ve been able to travel to some remarkable places; & spent irreplaceable time on adventures w/ wonderful friends. I try not to take any of this for granted. And at that moment, it hit me……..I’m so glad I’m not a flying fish.
Posted by Unknown at 3:25 PM