I thought I’d never get to sleep; last time I looked at the clock it was 4:15am. Yet, at 8:50, I was ready to get up. I turned on the TV so I could hear the Capt’s 9am report from the bridge. It’s partly cloudy outside; & we have a gentle tail wind, low 80’s. I checked HLN to make sure the outside world was still chugging along. I was super shocked to see that I am missing major rains in south FL (weatherbug already showed nearly 2” in North Naples by noontime today). Welcome relief. But the nor’easter looks pretty nasty. People onboard are already wondering whether it will impact their homeward travels on Mon. I dressed; the hair is holding up fairly well this morning.

The Crystal Cove is abuzz w/ preparation for the grand gala buffet. Many people gathered around the railings above on deck 6 watching the carefully choreographed “dance”. The pianist is playing Christmas music. I headed to the Bistro. I sat w/ John, Outi & Ashling & chatted for a while. Outi’s having terrible trouble w/ her sinuses. Like me, she started having “issues” when they put the baby poinsettias in the cabins after Caldera. She had her stewardess remove hers. I chatted a few mins. w/ (“Aunty”) Pat when she came in for breakfast. Then proceeded over to my little corner at the bar to set up my “office”. There’s a lot of activity in the Bistro this morning; maybe because they want to be near the buffet preparation or maybe just because….. I see some progress has been made on relighting the Christmas tree. The past 2 days, only the bottom “string” has been working. Today the bottom half is lit. I know I wouldn’t want to be the one who has to figure out which bulb is burned out on the (roughly) 20’ tree. Maybe the “Chief” is working on it. There I sat for about 3 hrs; burning up internet time, people watching & listening to the Christmas (piano) music until it became “easy listening” when the Crystal Strings took over during the lunch hour. Julie & Toni came by to chat; they were just getting their day started at 11:30. 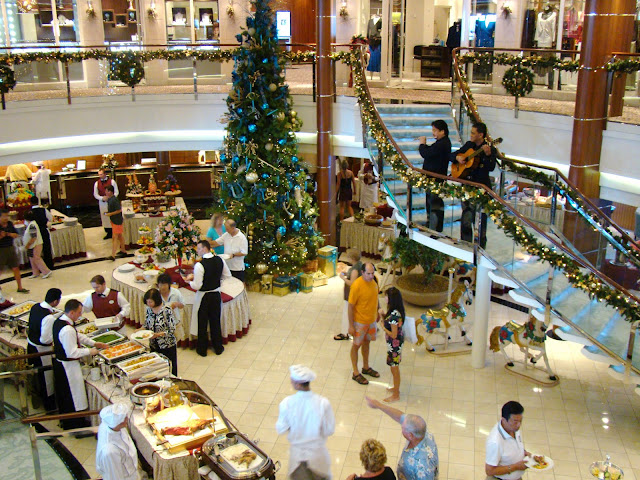 I decided to go against the flow; & go up to the Lido for my lunch. Bryn & Allen were eating up there; & I sat & talked w/ them a bit before perusing the buffet. I had a little taste of the cream of new potato soup w/ sautéed oyster mushrooms. The chicken enchilada was delicious. I had a few boiled shrimp & a baby lobster tail w/ cocktail sauce & creamed spinach. The pasta guy (Chester was not there today) made an appetizer portion of the arrabbiata (tomato sauce, parsley & parmesan) w/ extra garlic & red chili flakes. It really had a kick to it; perfection. There were so few people dining up there; it was really pleasant. Benjamin came by to tell me he had talked to his daughter in the Philippines yesterday; & she’s been delivering babies in her nursing training. He’s so proud. And he also reminded me that when he leaves for vacation in Jan, he MAY not be coming back. I started getting misty eyed thinking what it would be like if he weren’t here. 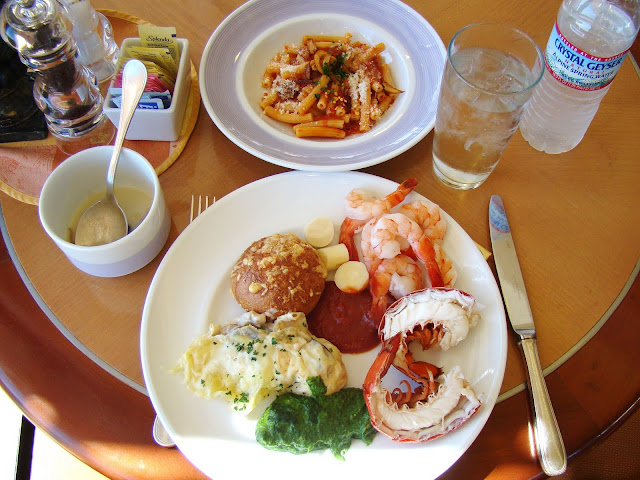 Around 2pm I moved out to the Neptune Pool area for some ice cream. As I walked toward Christian at Scoops, he was holding up his fingers….1…2…3. I held up 3 fingers; feeling bold & daring since I had skipped breakfast. I sat there working sudoku puzzles until I could feel a nap coming on. Went back “home” (awwww, it won’t be home for much longer) & crawled in the bed for1½ hrs. Woke up about 4, made myself comfy on the sofa & turned on the news. Determined to eat up every second of my (60 hrs) internet time, I’m back on the computer. The hell w/ all this reading I was going to get done. Looks like I’ll be carting home nearly all of the magazines & books I had brought w/ me. Some of you are thinking this is a disgusting way to spend a cruise. But I can honestly say, that I’ve spent it doing just exactly what I wanted to do. 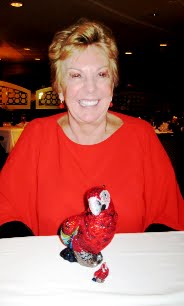 Tonight was the Capt’s Gala (Farewell) Dinner, the last formal night; & the last night Ioannis would be dining w/ us. Bryn & Allen were supposed to dine in Prego; but they were able to postpone their reservation until tomorrow. Therefore, everyone was at the table; & everyone was in an especially playful mood. I think it all started w/ Fran’s gorgeous evening bag; a brightly colored, jeweled parrot about 7” tall. All the ladies at the table were admiring it; & even the guys were intrigued. Of course, Ioannis treated us to several bottles of wine; it wasn’t long til I was having a flash, fanning myself w/ my place card. (Two glasses of wine & a handsome man in uniform to my right is enough to give a southern girl the “vapors”.)

The "Chief" & I in deep conversation 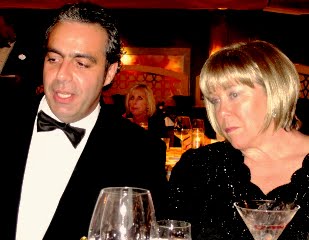 Things began to get out of control when Boris served the appetizers. Fran’s oysters Rockefeller became the hot topic of conversation. There was one big honkin’ oyster that had to be 6” across….I mean “Texas-size”. 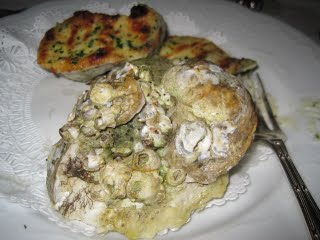 She stared at it in amazement for a while, not sure it was a good thing or not. I made a comment, something to the effect that “size matters”. The Chief missed it the first time around; but soon the whole table was in awe over this oyster. At that moment the whole table “melded”; everyone on the same page (maybe for the first time in 9 days). The rest of the meal was easy, fun. “Tall” Peter came over to see what all the ruckus was about. I was so glad Fran went to get her camera; these were some priceless moments. She even captured a photo of “Polly Parrot” perched on the Chief’s shoulder. No one rushed away from the table to get to the show. Even Ioannis sat a little longer than normal. We were one of the last to leave the DR just before 11pm. We didn’t want the magic of the night to end. God bless Fran, she promised to rush back to her cabin & e-mail tonight’s photos to me BEFORE she went to the casino. I told her I had a “deadline”. 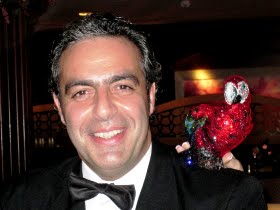 Oh, I almost forgot about dinner…….I had the same appetizer that I fell in love w/ last cruise; the chicken liver parfait w/ black truffles served w/ pear confit & port wine gelee (gelatin). No one else at the table had ordered it; & I ended up giving a bite to several others. And they all agreed that it was to die for. I had a cup of cream of asparagus soup & the pasta special. It was angel hair tossed w/ truffled pesto sauce, garnished w/ tiny navy beans & bay scallops. One of the side veggies tonight was the sweet corn fritters that were so good before. I asked Boris to bring some to put on top of my pasta. The “piece de resistance” was that awesome dessert, “chocolate melting moments”. I told the table that I highly recommended it; but most everybody made their own choices. When they saw mine, they oohed & aahed. I asked Boris to bring another serving of it so we could pass it around the table to those who missed out. It was as much of a hit w/ them as it had been w/ me. Bryn said she’d follow my recommendations from now on. 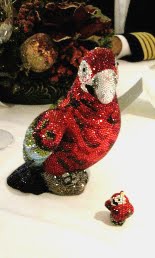 We run our clocks back & there’s a nice gentle rolling to the seas. I’m so gone…..
Posted by Unknown at 3:22 PM