I didn’t get to sleep til after 1:30; & surprisingly I didn’t hear ANY noise in the hallways during the night. I felt the tremble of the bow thrusters a little before 5am. I was in & out of sleep for the next couple of hrs. The final “wake up call” was when a booming voice came over the PA system (inside the cabin, which usually doesn’t happen) at 8:45…..“code alpha, code alpha, gangway pierside”. Obviously, some kind of medical emergency; which I should hear about later.

There’s no cabin breakfast service on turnaround day; so if one wanted to eat, you had to get up & go get it. Bummer! I didn’t even take time to put in the contacts. Glasses; stringy, flat hair & a minimum of clothes & I was off to the Lido buffet to get a box of granola (the only place you can get it besides room service). Of course, when you’re hoping not to run into anybody you know…… I grabbed the cereal & made a quick dash to the Bistro for yogurt, some fruit & capp. I stepped out on deck w/ the camera to take a few shots (mainly to show everyone that the Port of Caldera is nothing to look at). 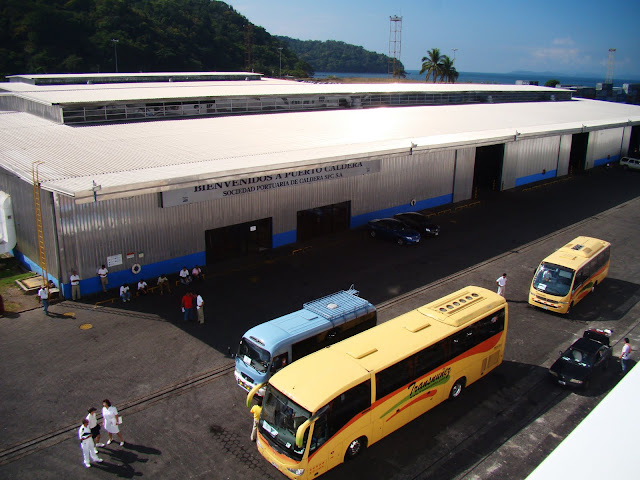 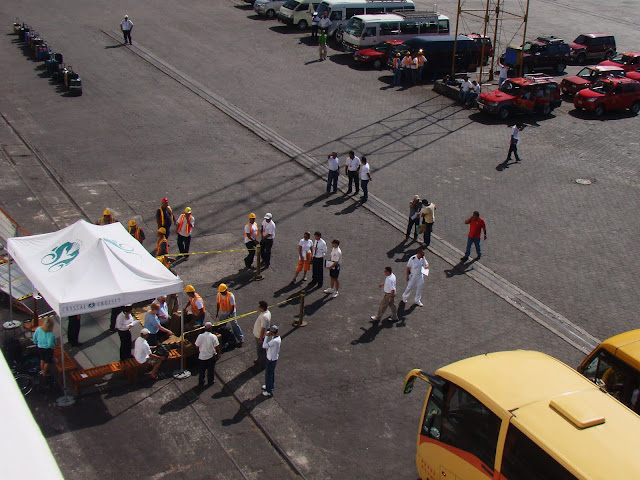 Back “home”; back in my jammies & curled up on the sofa & finally making headway in updating the blog. I nibbled on breakfast & coffee for the next 3 hrs. By then the new passengers were starting to board & head to the DR for champagne lunch.

[Off topic for a moment....I thought I'd throw in a few photos of my "home away from home".] 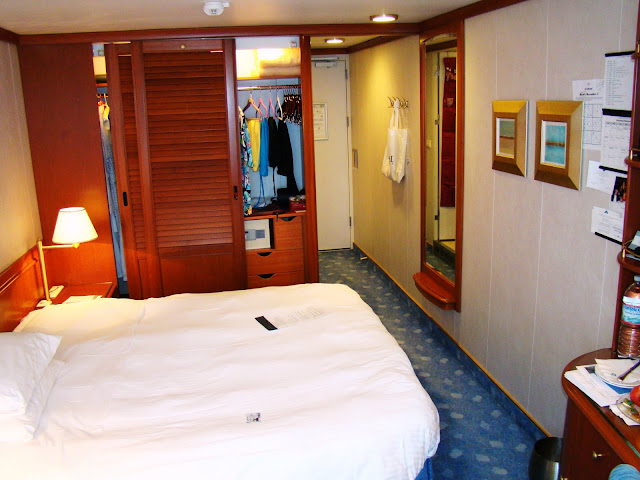 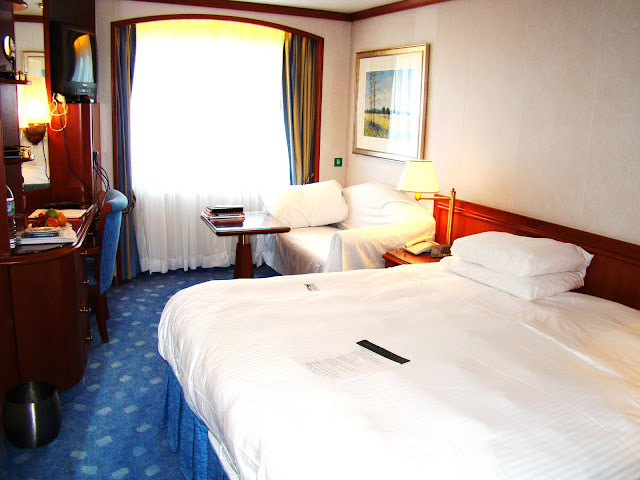 I got slightly more presentable; & went to the DR to see if I recognized anybody. Didn’t know if Leslie & Larry from Boca Raton were still coming. Or maybe Harvey from Toronto would show up as he has, 2 out of the last 4 years. I sat at a table for 2 by the window; & didn’t spot anyone new who looked familiar. I read a magazine while I picked at lunch. I really wasn’t hungry. I had a seafood appetizer that had a shrimp, a baby crab claw, a “rosette” of smoked salmon & a tiny dollop of crab salad drizzled w/ aioli sauce. For the main course I had a half order of cobb salad. I then went up to the Lido to show Benjamin the photo of the Lido guys. I wanted to make sure I had all the names straight before I published it on CC. The “Scoops” guy saw me & w/o asking, dished up some lychee sherbet. I was about to pop; but what could I do? I brought it back down to the cabin & put it in the freezer. I may have to “drink” it later. 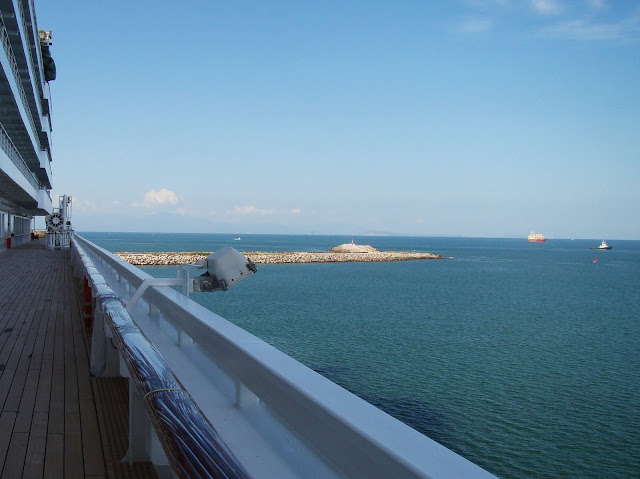 I spent most of the afternoon working on all those canal pictures. At this point, I’m sick of looking at the canal. Can’t begin to tell ya how much I’m looking forward to seeing it again day after tomorrow. I got a call about 5pm from Outi wanting to meet me for a drink at Palm Court at 6pm. Outi & I have never met; but her husband, John, posts on cruise critic. And we’ve been in e-mail contact for several months. I was very much looking forward to meeting his family.

[Another moment off topic but relevant..........this is my favorite position during most of this cruise. I have grown roots to the "sofa-ette".] 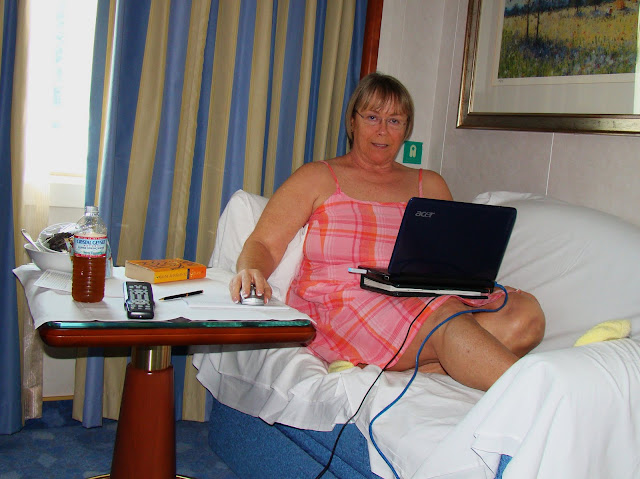 I dressed & went up to Palm Court; they were already there. John works for a tobacco company in Malawi, South Africa. He was born in Ireland; Outi, in Finland (prounce the name like the automobile, Audi). Their 13 yr. old daughter, Ashling is a darling young lady. Turns out Ashling is staying in the cabin next to mine; parents have a cabin on deck 8. We chatted for an hr. & a half; & the time just sped by. We only stopped because they had to attend lifeboat drill at 8. I am not required to attend the drill again. They had spent the last 4 days in Costa Rica; & had some exciting adventures staying in the Peace Lodge (an eco-resort). We talked a bit about their life in Malawi. But I have so many questions since I really know nothing about S.A. & what it must be like being a foreigner in a country where gas is in short supply & the modern conveniences we’re used to cannot be guaranteed or depended upon. By the time I left the lounge it had started to rain & there was a little lightning off in the distance. 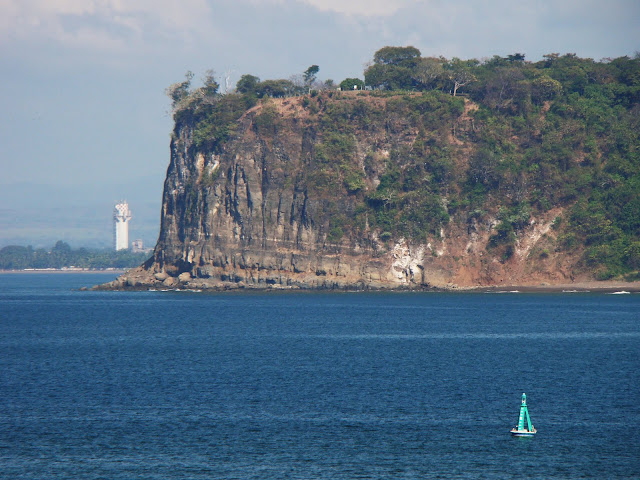 They were going to eat a quick, light meal at the Sushi Bar in Silk Road after drill. Since I’m dressed, I decided I should go to the DR & meet the rest of my new tablemates. I received a dining card this afternoon confirming that I will be seated at the Chief’s table again. Everyone was already at the table when I arrived in the DR. Three new couples; & no sign of Harriet & Seymour. Boris told me they were assigned to another table (against their will). I’m disappointed; & I can’t wait to tell yet about my new tablemates. The couple that sat next to me were very nice; Bryn & Allen from PA. She looks like a model; well tanned & very rich. They spend time each year at the Jersey Shore & St. John, USVI. And the husband comes to Costa Rica to play golf & fish w/ his friends a couple of times a year. They have friends in Naples & Bonita Springs. She’s very animated & funny; he was busy talking to the couple at the other end of the table (David & Natalie-due to the length of the table I wasn’t able to talk to them at all). There is an “interesting” couple across the table from me. He’s also named Alan; wife is Barbara. They are from TX; both college accounting professors. She talked a good bit; but he said barely nothing. But I shouldn’t judge by first impressions for they can be deceiving. Shortly after we started dinner, we pulled away from the dock (9pm).

Anyway dinner was pretty good. I started w/ a terrine consisting of layers of prosciutto, goat cheese, citrus marinated apples & pumpkin. I realized later that the rest of my meal was the exact same thing I had 11 days ago. Delicious creamy king crab soup w/ brie. And a not so tender sirloin steak. This time I had grilled zucchini & eggplant & sautéed spinach. I started to order the (sugar free) strawberry tartlet; but Boris didn’t think I’d like it. So, I tried something a little different; cheese & fruit. I had some brie & saint loupe (sort of brie-like, only nuttier). With it I had dates (hadn’t had those in forever) & a “chutney” that tasted quite a bit like mincemeat (as in the pie). I must say I really enjoyed the combination. Natalie & David got up shortly to head to the show. Bryn & Allen headed off to bed (they had had too much champagne when they boarded). And I left Barbara & Alan still sitting at the table.

For some reason, I’m tired. Still don’t know if Leslie & Larry are onboard. They would have eaten at the early sitting, if they’re here. So, we’ll see what develops tomorrow.

[And now, in a moment of "true confession".....this is how the overly organized, obsessive/compulsive me keeps up w/ important comings & goings. I am forever thankful to Keith from Cruise Critic for letting us know that the cabins walls are "magnetized". That's the greatest things since sliced bread!] 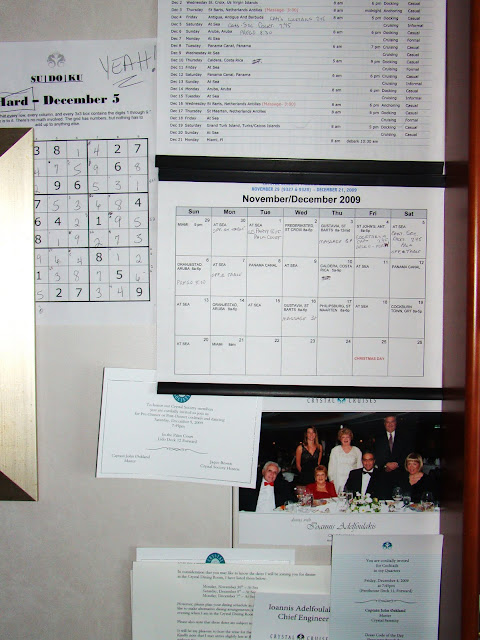