For some reason, I had a fitful night sleep w/ pretty weird dreams (that I’d just as soon forget). I had put in a breakfast order for 9:45; & when Catherine knocked, I hollered for her to come in but she couldn’t hear me. When I stood up, this unpleasant feeling came over me. A tiny wave of nausea & this mother of a headache. The light from the hallway was blinding when I opened the door. Oh man, is this what a migraine feels like? Never had one; & didn’t want to start now. I sat up long enough to eat the granola & yogurt; & climbed back in bed. I took a couple of advil & finally went back to sleep. I slept on & off until about 3pm. Headache was some better; & I thought maybe if I got up & out it might go away entirely.

I went down to the photo gallery to order reprints of the Lido guys’ group picture (since they all asked for a copy). Then a stop at the compt. ctr. to transfer yesterdays photos to the compt. Only food venue open at this time of day is “Trident”, the burger/sandwich place. I sat down; & Max came over w/ water & took my order. I had a cheeseburger & some fries. Just after I started eating, Outi came up & sat down while she had a hot dog. We talked more about Malawi: & she told me that she had just published a (coffee table) book about Africa. She had also worked w/ a tour company promoting African safaris to her native Finland. She is hopeful that they will eventually relocate back to Finland where she’d like to get back into travel. I got a little sherbet from Christian & came back down to my cabin. Part of me wants to check the message boards (still haven’t uploaded the photos to cruise critic); but I still feel strange. Nausea’s gone; but the head is still pounding. Took more advil & laid back down around 5. I slept til 7:30. I feel better, headache is almost completely gone now. But that leaves me wondering-just what was that episode? Please don’t let me be coming down w/ some dreaded disease like H1N1.

[Since it was a blah day; thought I'd throw in some photos of the Christmas decorations that have been going up the past 12 days. Another reason is to break up the paragraphs. When I create a new entry & preview it, it shows perfectly spaced paragraphs. But once you hit the "publish" button, it becomes a continuous string of uninterrupted sentences. Impossible to read.] 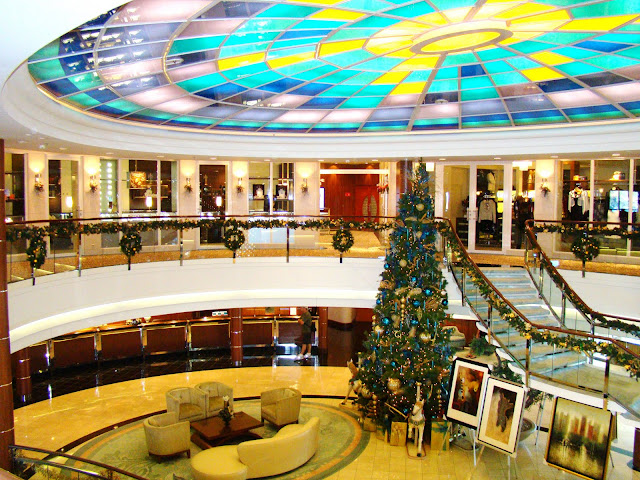 It’s formal night, which means that Ioannis (the “Chief”) would be dining w/ us. If he weren’t, I’d be just as happy ordering in. I was able to get a better feel for my new tablemates. I am really liking Bryn. She may be dripping in fabulous jewels; but she’s a sweetie, really down to earth. We had great fun talking about DWTS. Her husband, Allen is "talkative". He's obviously serious about cooking, & very good at it too. Barbara & Alan are "different"; & I've not been able to "read" them yet. The other couple, David & Natalie seem really sweet. Our seating arrangement (which had me next to the Chief again, lucky me) made it awkward to have a conversation w/ them; they were just too far away. The one person who was missing from our table last night, appeared this evening. I finally get to meet (the infamous) Fran Bator. I’d read about her on the CC message boards; & am well aware of her long history sailing on Crystal (over 150 cruises on Crystal alone-no telling how many in total). Just so happens, she lives in Naples. She sat on the other side of the Chief; so we only spoke briefly around him. But at the end of the meal, she was sweet enough to come to me & say that she hoped to get a chance to talk further. She has some hearing issues so she wasn’t able to hear everything that was being said at my end of the table. 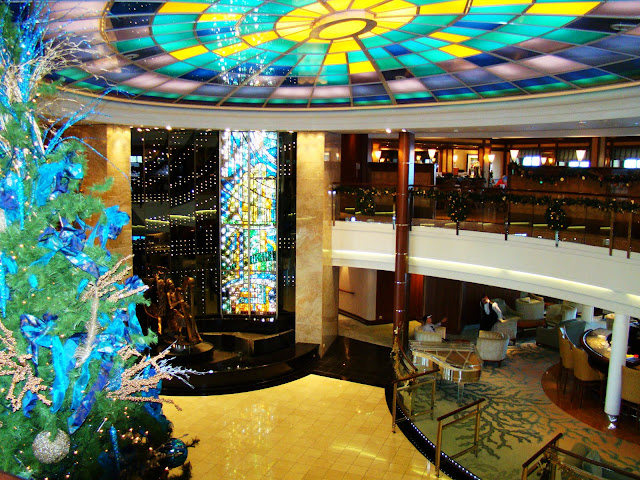 Doing a back-to-back, I am for the first time experiencing repetitive menus. There may be one item that’s different from sailing to sailing; but mostly the same. This isn’t necessarily a bad thing; but it does allow me to enjoy again some things that impressed me before. I started w/ a mixed greens salad w/ cherry tomatoes, cucumbers, mushrooms, bean sprouts & crispy sweet potato “straws” w/ orange balsamic vinaigrette. I had an appetizer portion of spinach spaghetti w/ sun dried tomatoes, fava beans, mushrooms & basil in alfredo sauce (very nice). I wasn’t in the mood for lobster, halibut, quail or chateaubriand. So, I asked for a plate (half & half) of my 2 favorite vegetable/side dishes. Champagne-honey braised cabbage & truffled leek risotto. That stuff is beyond description. “Tall” Peter (who is the Head Waiter of our section this cruise) came around offering cauliflower Bolognese. It looked delicious but bore no resemblance to Bolognese that I’m familiar w/ in spaghetti. Steamed cauliflower, sautéed in butter & egg; tossed w/ bread crumbs & then put under the broiler. Very, very good. 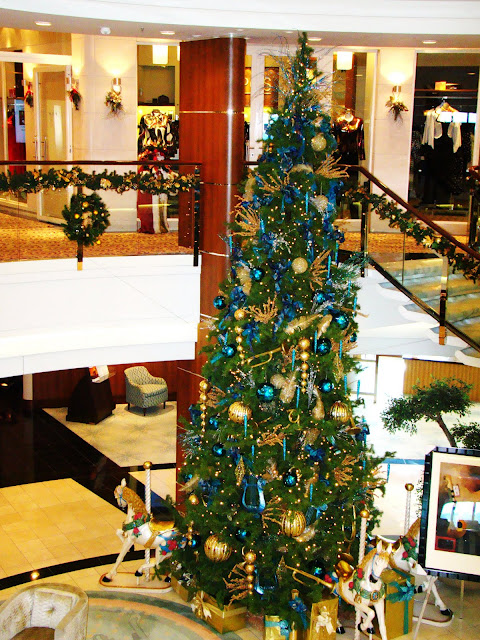 I really wanted to have the white chocolate truffle cake w/ raspberry bellini sherbet for dessert. It just sounded so fabulous; but I thought I’d go for the cheese & fruit again, since it hit the spot last night. I’m not that adventurous when it comes to cheese, preferring mostly mild cheese. From the long list of foreign sounding names, I wouldn’t have a clue what they were if they didn’t provide a short description of the taste. I had (I think it was called) La Merlotmonte & some variation of Brie. They were delicious. And along w/ the cheese I had a dried fig, some more of that chutney (mincemeat flavored) & a bit of mango chutney. I think I could really get into this after dinner custom. Most everyone was in a hurry to get to the 10:30 show. Harriet & Seymour stopped by the table on their way out; again stating to the Chief how disappointed they were to be sent to another table.

My curiosity was getting to me so I went to the Reception desk to ask if Leslie & Larry (from Boca) were onboard. They are not. They obviously cancelled; & now I’m left to wonder why. I turned around & there stood Lynda (half of “Either-Oar” from cruise critic). It took me a moment to remember; & since Spike wasn’t w/ her & it had been a year since I had seen them. I originally thought they were boarding in MIA w/ me; but they only came onboard yesterday. I guess I’ll get to catch up w/ them tomorrow at the Cruise Critic cocktail party. I was in for the night by 10:45. Since I slept so much today, I don’t know what kind of night I’m going to have. I don’t really feel like a long internet session (something must be wrong w/ me). Maybe I’ll just lay down & try to read & hopefully sleep will come sooner rather than later. We’re moving at a fast clip; & there is some rolling. That should make for pleasant dreams.
Posted by Unknown at 12:16 PM