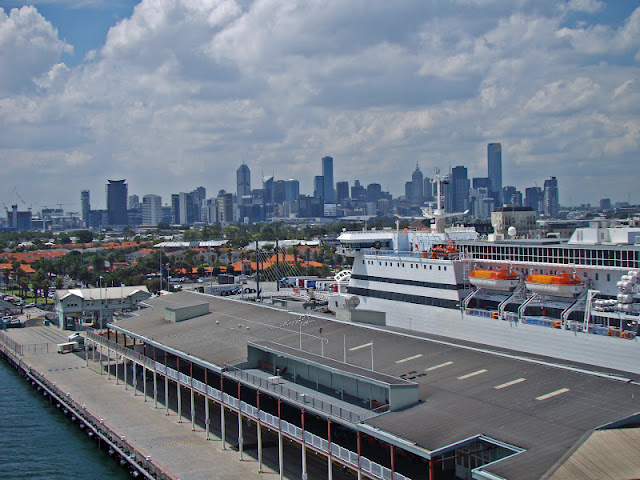 I was more than shocked to see sunshine when I got up.  It was quite cool outside; & I dressed accordingly (my mistake).  I could tell from the view from the aft deck, that the city itself looked fairly close (as the crow flies).  It was a busy day in the port of Melbourne, with the Spirit of Tasmania (car/people ferry) & the Century (which will continue to follow us all the way to Perth) lined up on the other side of the narrow ‘finger’ pier. 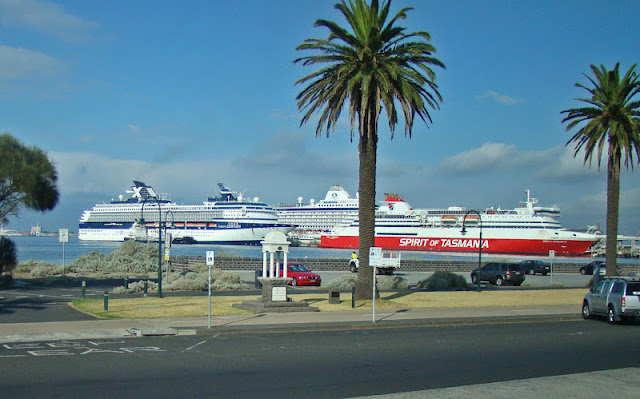 I took the Panoramic Melbourne tour (MEL-AW) which departed at 9 am.  Our guide was Diana, our driver, Lorrie; & we were escorted today by (U.S. Dept. of State diplomat & guest lecturer) Joe Snyder & his wife, Ann. 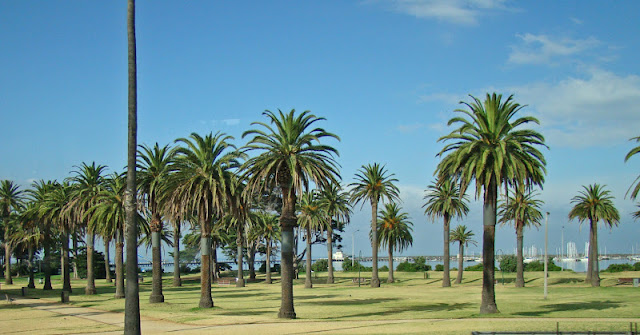 As this was a general city overview, we saw a great variety of what Melbourne has to offer.  The city is a mixture of many cultures; & is home to the largest population of Greeks to be found outside of Athens (followed closely by Italians).  Since Melbourne was established by ‘free men’ (not as a penal colony like Sydney & Newcastle), they consider themselves to be culturally & intellectually superior.  One could certainly debate this statement; but I did find the city to be a happy mix of preservation of Victorian influence & wacky modernism which greatly appealed to me.  The quirky architecture had me mesmerized. 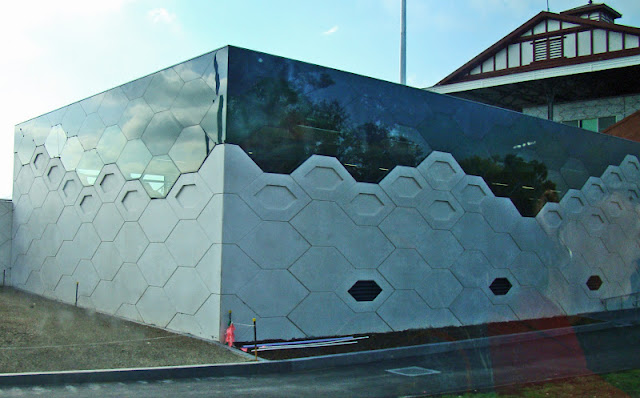 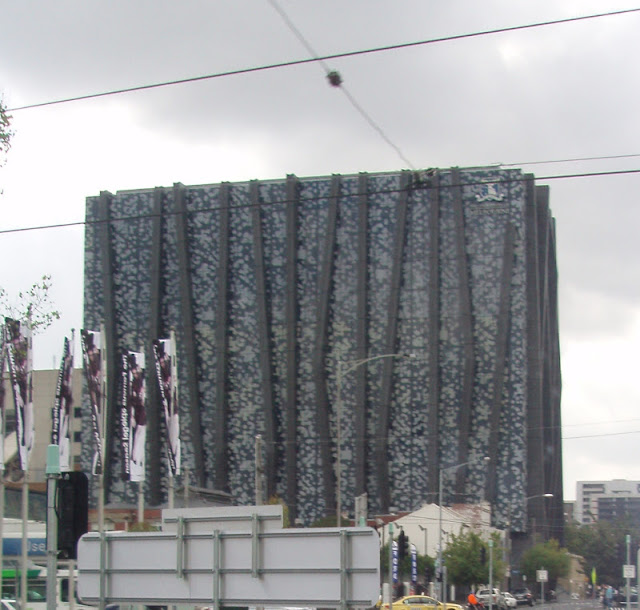 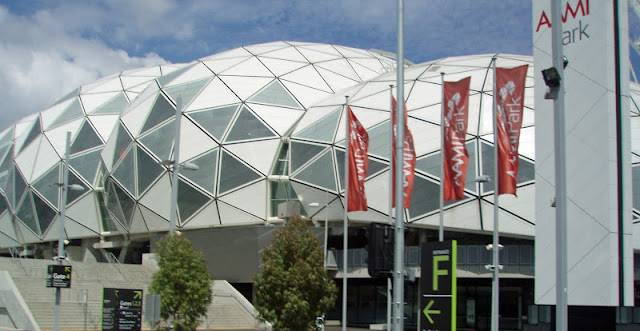 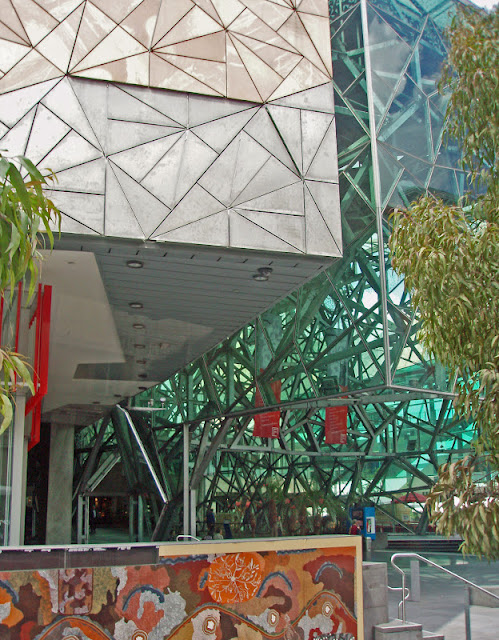 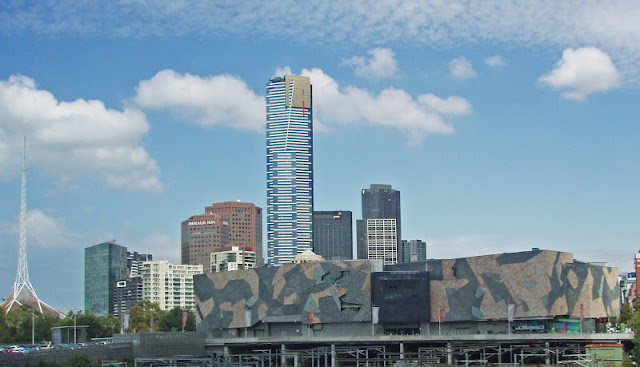 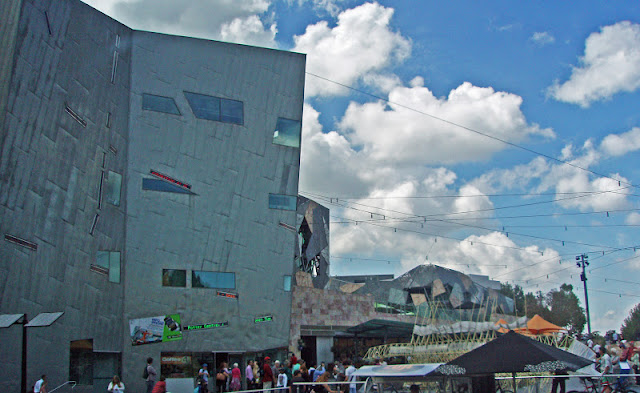 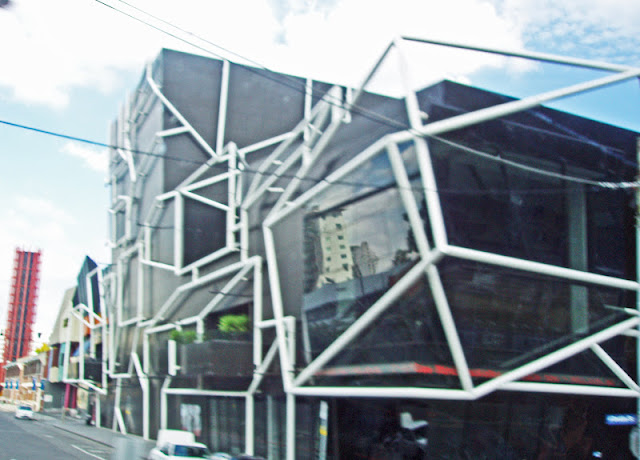 I didn’t realize that the route to get into the city was much further than it appeared from the deck of the ship.  By the time we made it into the city, the cooling sea breeze was gone; & the temperature was on the rise.  I spent the rest of the day regretting my choice of jeans & long sleeve blouse. 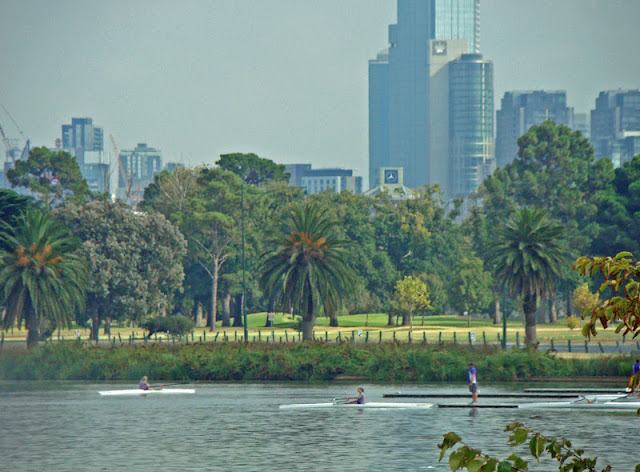 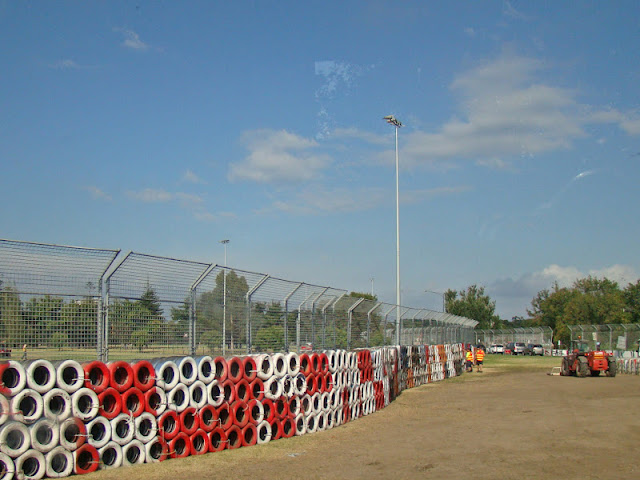 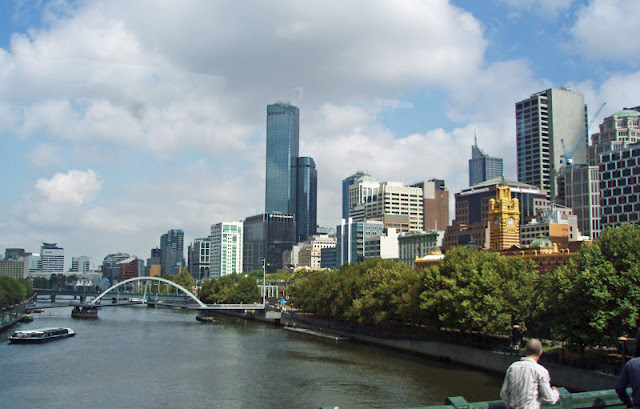 The downtown area of the city is divided by the Yarra River; & the locals appear to make great use of their open park areas, scenic walking paths.  I saw quite a few rowers & fishermen along the river.  The Grand Prix will be held here next month; & there is much preparation going on.  Our bus driver drove us along the race route, which is already lined with tires & stadium seating. 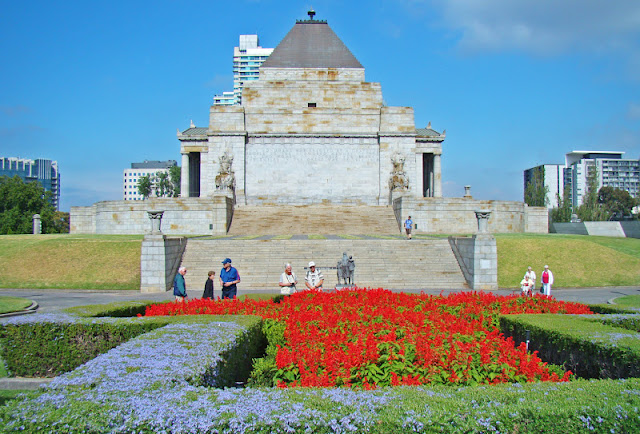 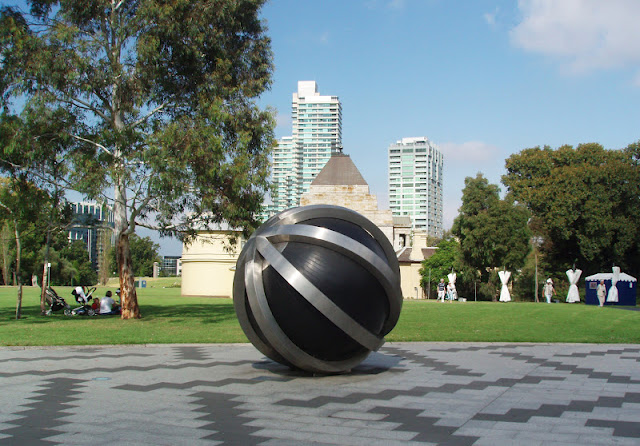 One of our stops was at the Shrine of Remembrance across the street from the Botanic Gardens.  There was only enough time to walk through one small section of the garden (which happened to be the children’s gardens).  Lots of mothers with small children & strollers were congregating in the grassy areas.  The war memorial & eternal flame torch just across the street make a lovely tribute to those who lost their lives.  At one entrance was a lovely floral clock in shades of purple & yellow. 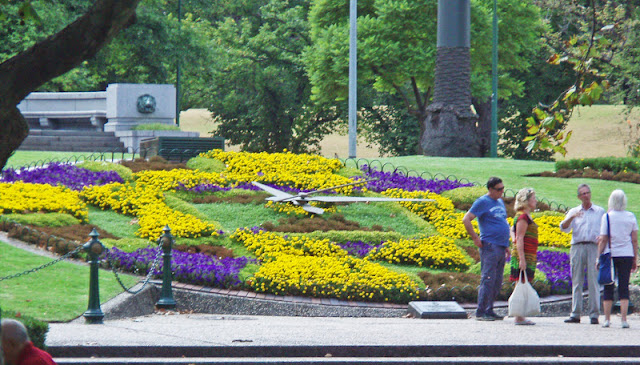 We also made a short photo stop at the lovely St. Patrick’s Cathedral, whose numerous fountains provided several calming spots for reflection. 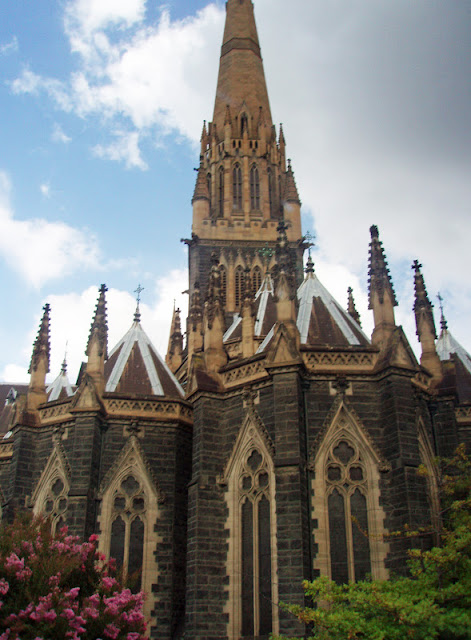 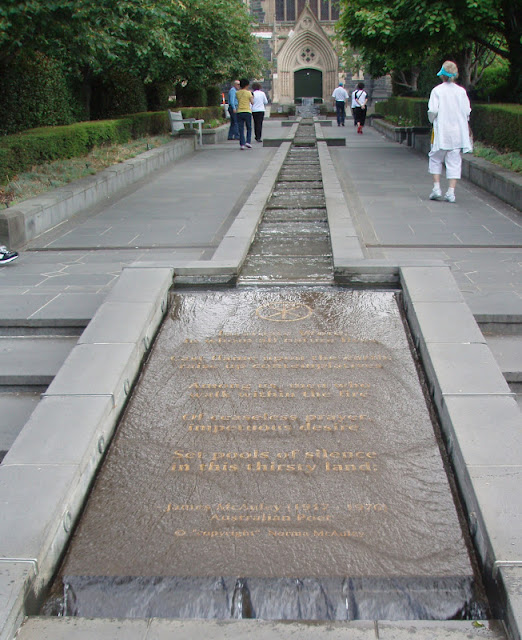 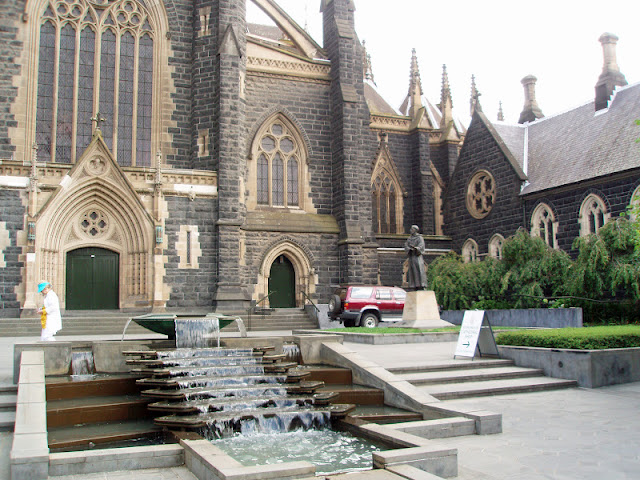 Although it was not on my tour, the Eureka Skydeck (bldg.) was on several others.  This building is the tallest residential tower in the southern hemisphere (92 stories); & it is the most prominent structure on the city’s skyline.  Up on the 88th floor is a glass cube that projects out from the south side of the building that provides stunning views out, above & below.  That would have been perfect on a beautifully, sunny day like today. 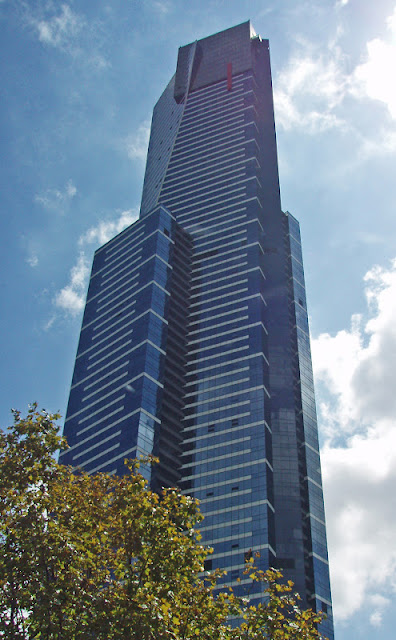 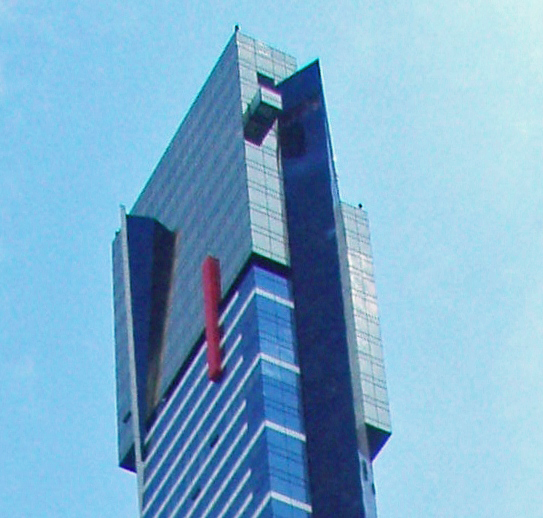 At the end of the tour, the driver made a stop at Federation Square so that those who wished to stay in town on their own could do so.  Crystal offered a complimentary shuttle bus every 30 minutes between the ship & Federation Square between 9am & 6pm. 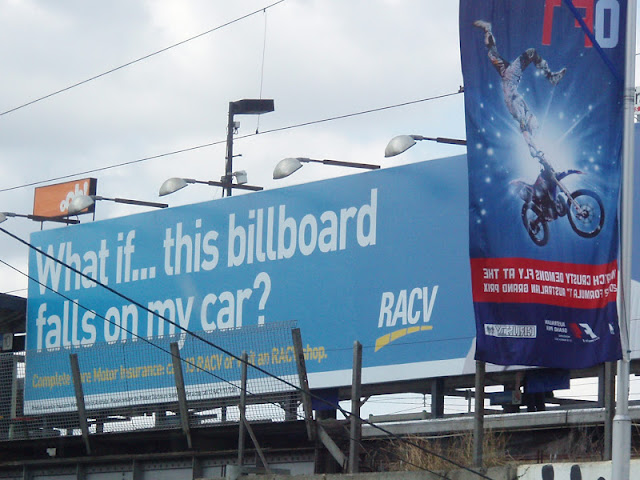 We got back to the ship about 12:45; & I headed straight to the Lido Buffet for a wonderful lunch.  I had some hearts of palm (again), swiss cheese wrapped in prosciutto, a taste of the sundried tomato cheesecake (excellent), sautéed spinach, braised veal roulade that was filled with parma ham & spinach (tasty, but a little dried out).  The big hit of the day…..horseradish basted spare ribs.  OMG!  The horseradish was subtle; & the meat just fell off the bone.  When I took one rib just to try it, Costa told said ‘trust me, you’ll want more’.  And I did, several times more. 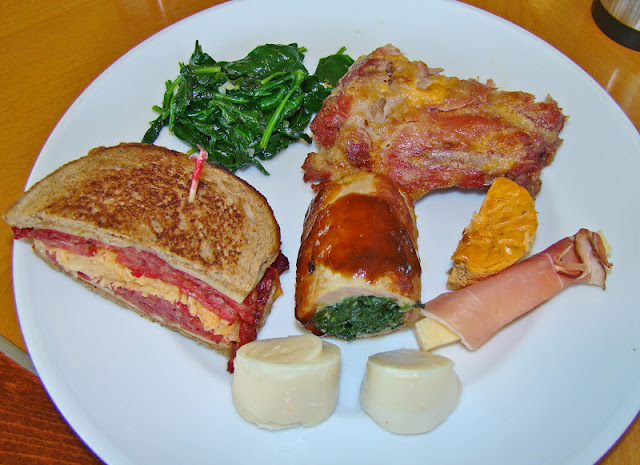 When I got back to the cabin, my intention was to lay on the bed & prop my feet up on the wall till the swollen calves & ankles went down.  Guess how long that lasted…..4 hours!  I was so upset with myself. 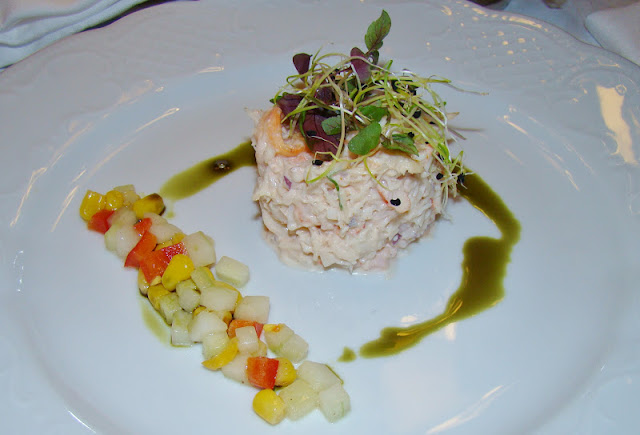 I ordered dinner in.  I started with a creamy crab meat ‘tower’ with a little corn & cucumber salad on the side, drizzled with pumpkin seed oil.  I’ve had this many times before; & it’s one of my favorite appetizers. 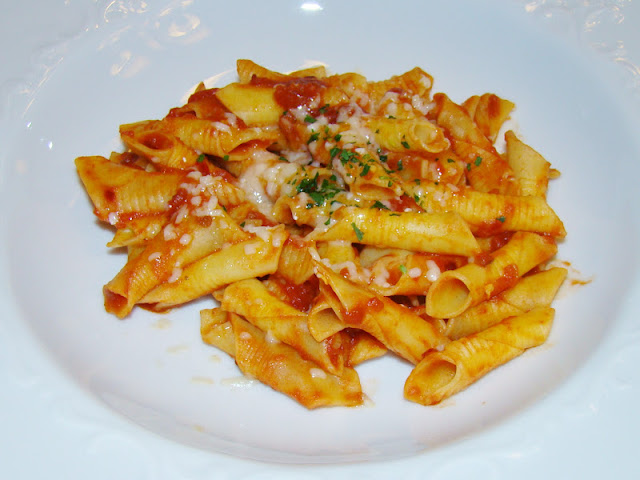 I had an appetizer portion of the pasta special, garganelle arrabiata (nice & spicy with garlic & chili flakes). 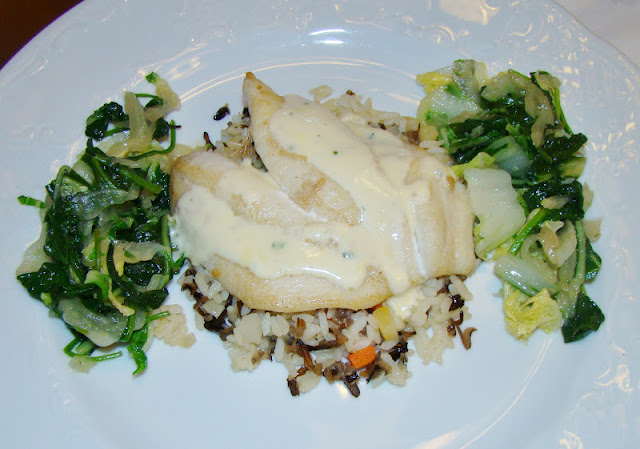 My entrée was fillet of Australia dory with herb sauce on a bed of wild rice with wilted greens.  It’s was delectably moist & flavorful. 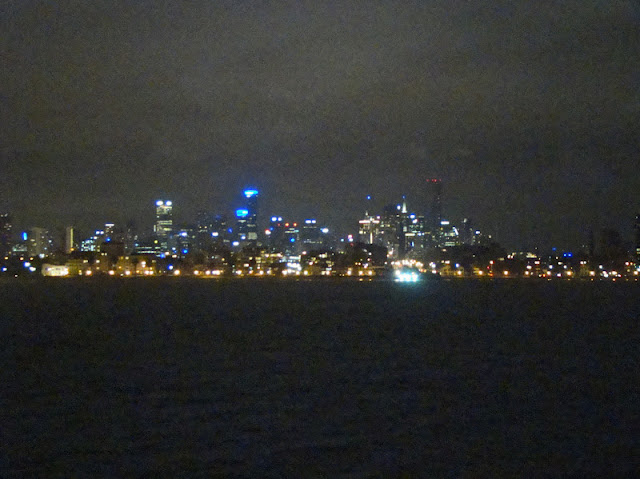 We set sail from Melbourne at 11:30 pm.  I wanted to sneak out back with the camera & get a nighttime shot of the skyline.  I got caught in my muumuu, barefooted by the Discovery Channel film crew who had set up back there to shoot our sailaway.  They seem to be everywhere; & you never know which direction their cameras may be pointing. 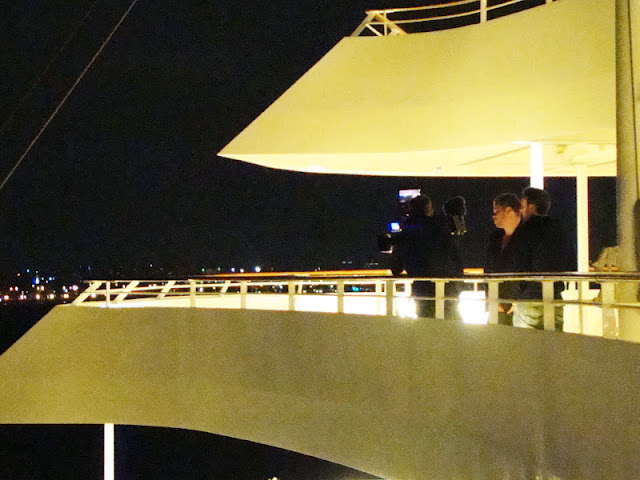 I have learned that my friends, Keith & Anne Marie, were filmed the other day in their suite being served lunch by their butler.  Celeste was filmed conversing with (Hotel Director) Josef on the stairway of the Crystal Cove.  This is 2nd hand info; but it appears that this episode of “Mighty Ships” won’t air for about a year.


Well, tonight I experienced another first…..first time I’ve had to set my clock back ’30 minutes’.  Makes you scratch your head…..why?

I am enjoying your blog and look forward to reading it whenever you have the time to post.

I'm pleased you enjoyed your visit to our lovely city of Melbourne. We've had a milder summer than usual with little rain.February can be unbearably hot here, but today was perfect for a tourist.

Enjoy the rest of your voyage.
Best wishes.