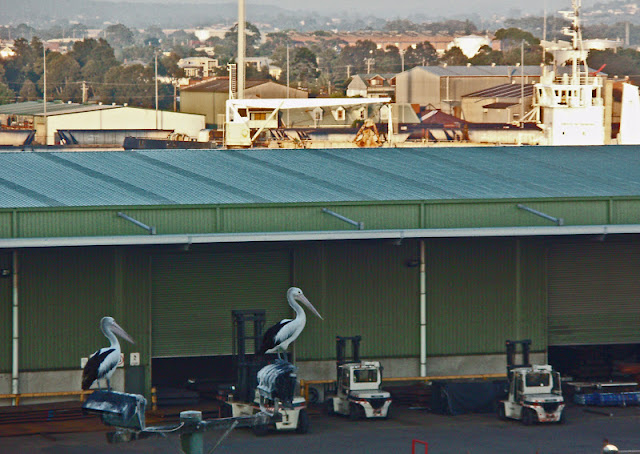 Even though I got to bed later than I wanted, I was wide awake at 6:30.  It dawned on me that I didn’t have any coughing fits during the night; & that I actually got some meaningful sleep. Sweet!  I could see sunlight coming through a slit in the drapes; I just had to take a peek to see if we were ‘there’ yet.  We were still positioning ourselves at the pier.  It looked like it was going to be a gloriously beautiful day. 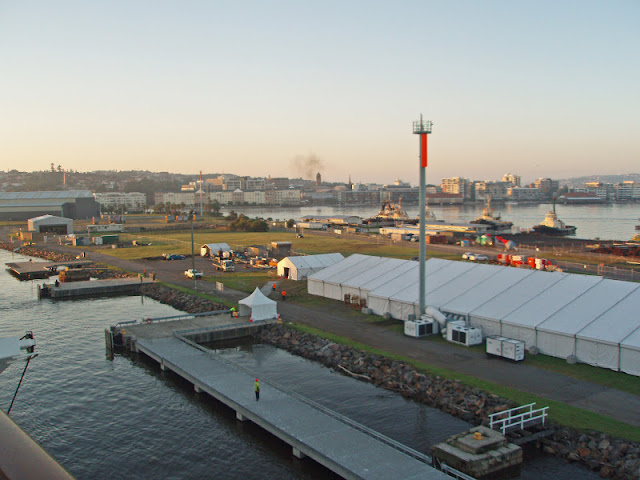 Since I had leftover pasta from last night’s dinner, there was no need to rush off & find anything for breakfast.  I made do with that; dressed & went down to the lobby first thing to exchange some money.  The ship arranged for Travelex to set up a desk from 8 – 12 so that we could exchange US dollars for AUS dollars ($1.10 US to $1.00 AUS).  We had been discouraged of trying to use any US currency, even for tipping.  So, I got enough to have small bills for the next week. 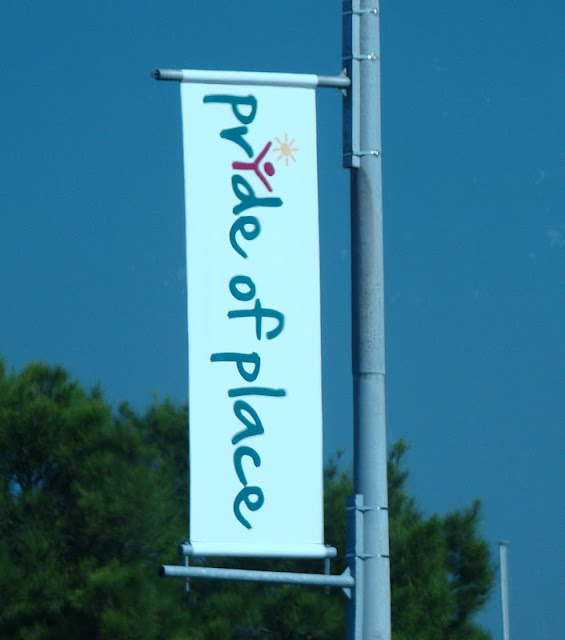 As I was getting off the elevator I saw one of the sweet photographer girls that I say ‘hi’ to every morning.  I told her of my camera problem; & she said I should bring it by later in the evening.  I pulled the camera out of my bag & told her briefly what it was(n’t) doing.  Her first thought ….. it could be an internal software problem, a speck of dirt blocking the zoom lens?  I asked if they sold any REAL nice cameras onboard.  Just mainly point & shoot……which I don’t need.  Hmmmmm. My city panorama tour (NTL-AW) departed from the Stardust at 8:30; the gangway was right from the Crystal Cove lobby on deck 5.  There was a nice breeze; mid 70’s; perfect IMO.  There were 3 buses for this tour.  I like the fact that Crystal doesn’t cram the buses full; & I usually have no competition when it comes to getting a seat on the back row.  I can have the whole back row to myself; both sides of the bus.  Our guide (Malcolm) & our driver (Simon) were very personable, helpful to the old folks & didn’t talk your ear off. 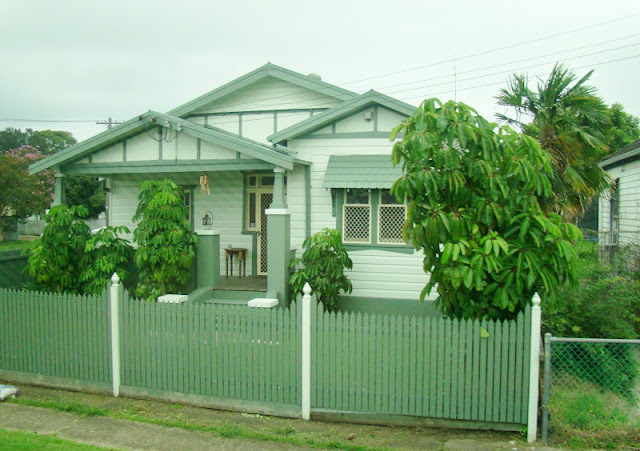 During our scenic drive, Malcolm explained that Newcastle also came to being as a penal colony.  Because of the deep water harbor they are able to export a lot of goods: aluminum, grain, & coal (lots of it…..110 million tons of it each year).  The port area has many tall silos holding grain; rows & rows of aluminum lined up at the dock & cargo ships loading & unloading.  We drove down Hunter St. (the main drag); & it’s a cute town atmosphere with tons of restaurants & all types of single story business interests. 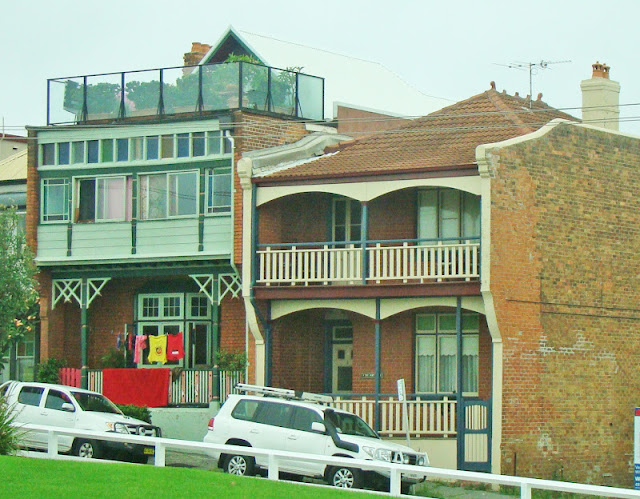 Except for the million dollar houses that have beach views, all the rest look very normal & quaint.  With their tiny yard, lots of flowers & some with tin roofs.  During this part of the ride, I began to fiddle with my ‘good’ camera; I was thinking about what Christie said.  I had a plastic toothpick in my billfold; & I very gently ran it around the space where the lens recesses into the camera body.  It met no resistance, nothing seemed to come loose.  Yet, when I turned the power on…..out popped the zoom lens.  Hallelujah….hallelujah!!!  I was as thrilled as Christmas morning.  Was afraid to turn the camera off at first, thinking I was just imagining this.  But it continued to work the rest of the day.  God/Buddha willing, it will perform well for the rest of the journey. 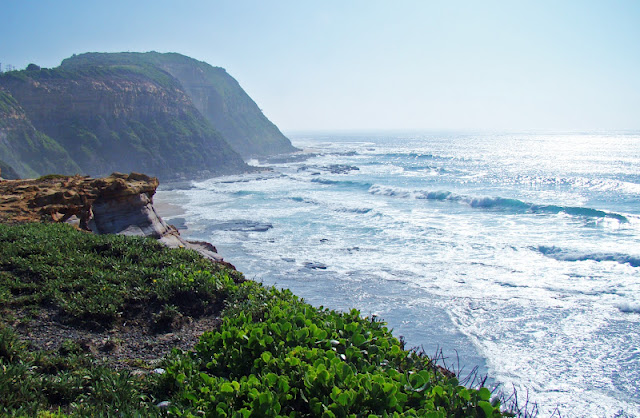 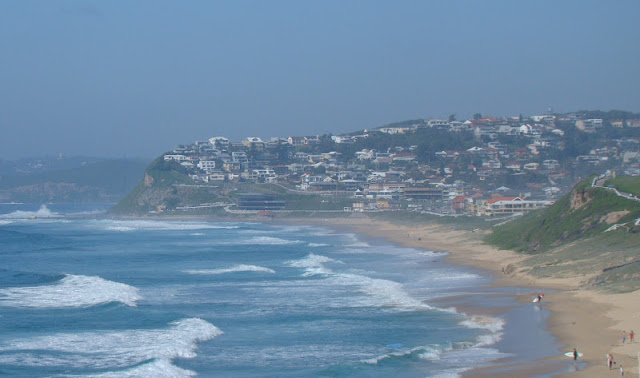 We made a photo stop at Newcastle & Bar Beaches.  The surf was pounding; & there were ample bodies out there on their boards waiting for that perfect wave. 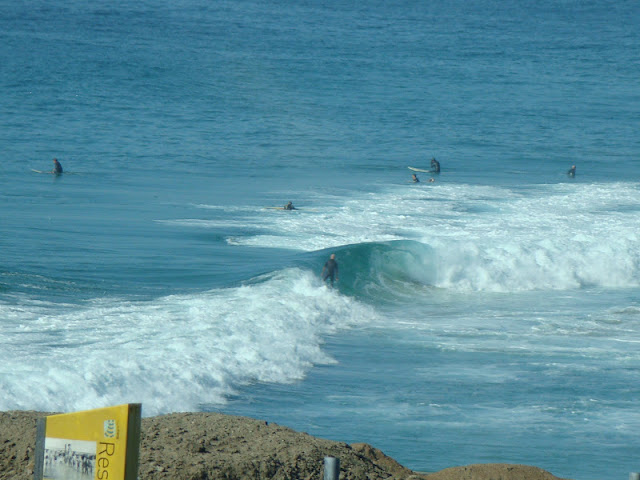 Our next stop was at Blackbutt Reserve, a natural bushland area in the suburbs where they exhibit & rehabilitate certain species of wildlife.  I was disappointed to see a sign as soon as I walked in, the koalas which sleep almost all day, would not be awake until 2 pm for their ‘photo op’.  So, no live koalas today.  But I did see quite a few emu (a tall bird that slightly resembles an ostrich but with ‘brillo pad’ looking plumage).  I saw a good number of kangaroo, beautiful birds of unknown origin perched in the low trees & several peacocks running amongst us.  There is a small play area at the entrance; & it seemed to be a gathering place for mothers with young children.  A few of us sat in the shady area & chatted with them until it was time to go back to the bus. 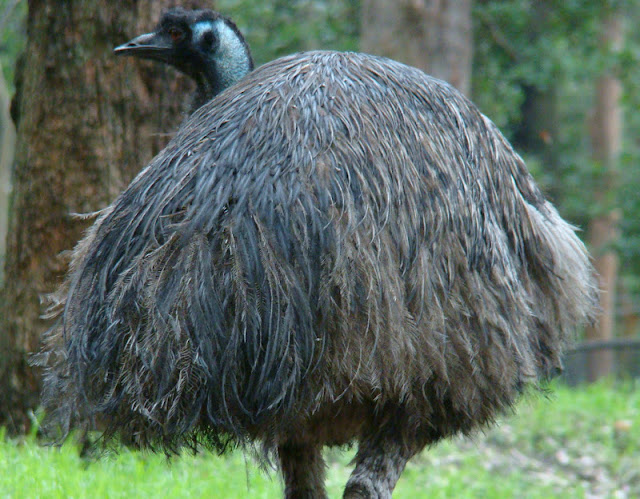 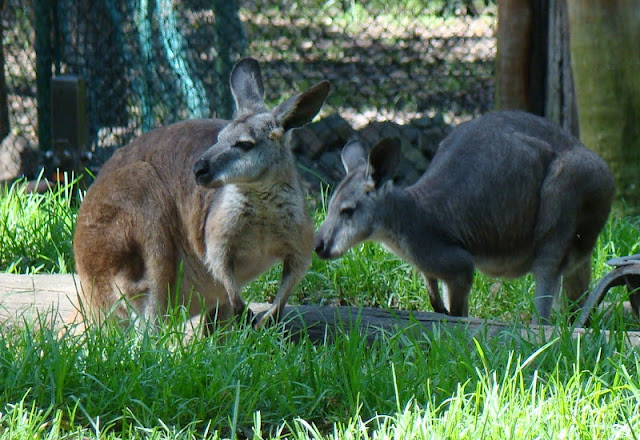 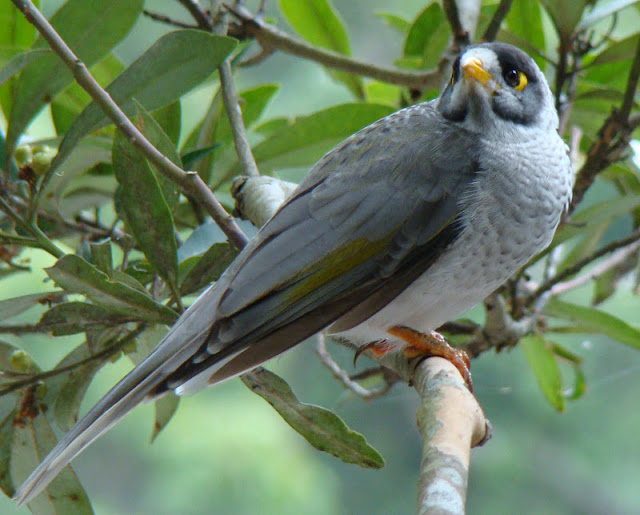 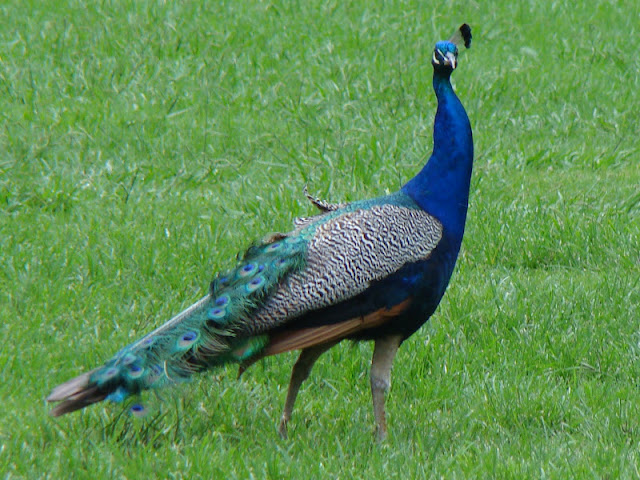 BTW, there has been a young family onboard since LA.  The couple has the most precious little girl that has stolen the hearts of all the passengers & crew.  Grandma is with them; & they’ve been on several of my tours.  They are a fun loving family; & the little girl talks & “hi-5’s” everybody.  I think everyone will be sad to see them leave the ship tomorrow in Sydney. 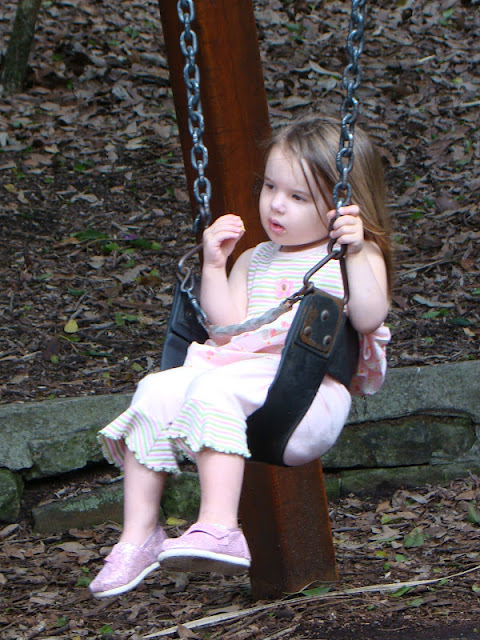 While we were at Blackbutt, it started getting cloudy & a lot windier.  I fully expected rain; but it never came thank goodness.  Our last stop was at Fort Scratchley, which was built in 1882 to protect the city from invading forces.  There are fortified walls & bunkers with canons. 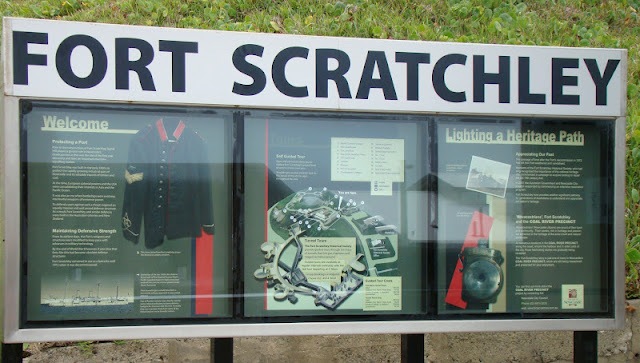 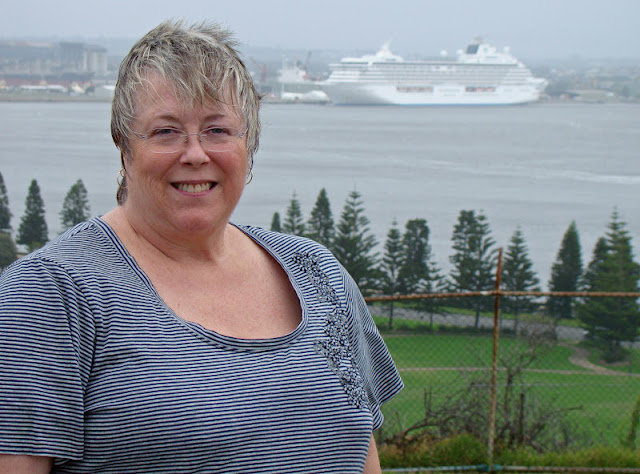 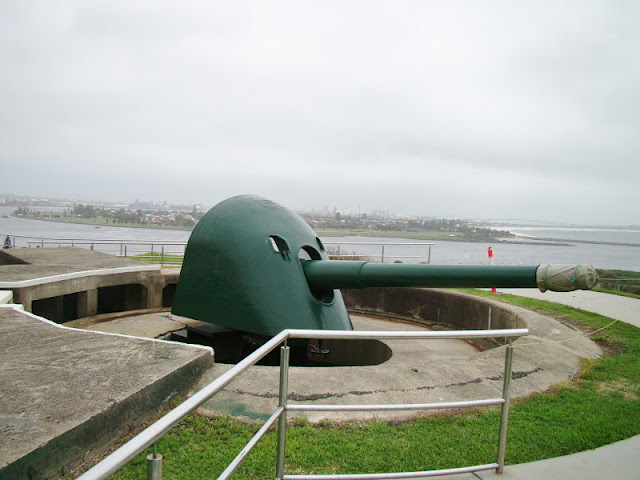 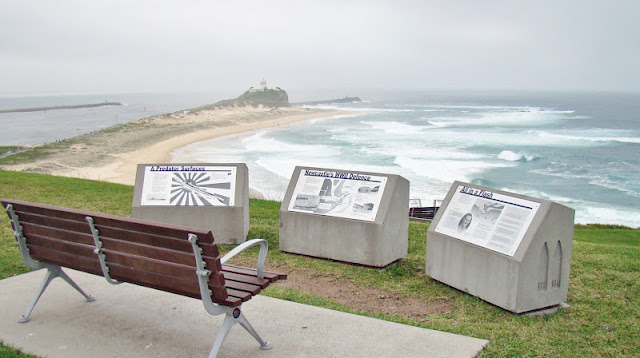 The view of the Hunter River where it flows into the Tasman Sea is lovely; & the surf is mighty.  Our tour came to an end about 11:45 (a little earlier than publicized).  I think quite a few were anxious to get back to the ship to see what was left of the Super Bowl Game (which had started at 10:30 am). 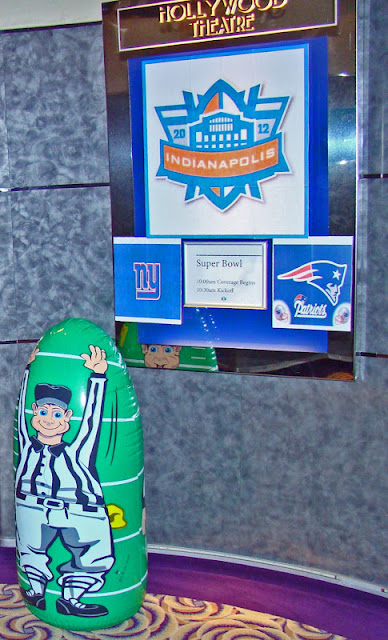 The Hollywood Theatre was decorated & a hospitality area was set up just outside.


They were serving popcorn, hot dogs & all the fixins’.  They even had free drinks.  My timing was perfect, since the main attraction for me was the halftime show.  And I took my seat with a nice cool beer just as Madonna took the stage.  The game was being shown in other rooms on the ship; & I was surprised that there were not a lot more people in the theatre.  Maybe some of them had gone for a lunch break. 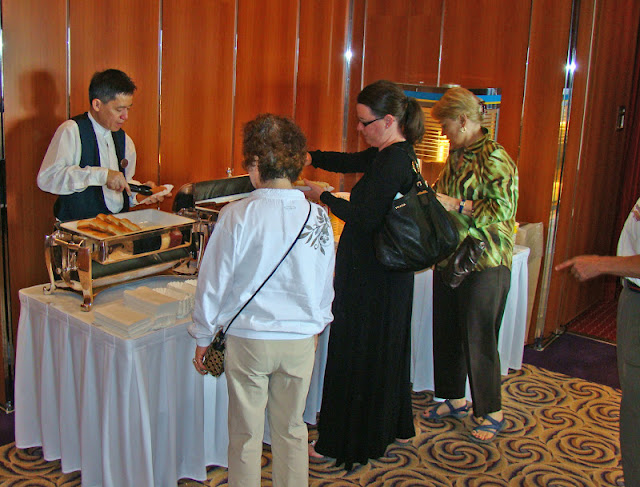 I went up to the Lido for some lunch about 1:30.  I had some salad, shrimp cocktail, a piece of weiner schnitzel with lingonberry sauce; & one bite of a very soggy pastrami sandwich.  They also had a little ramekin of shepherd’s pie, which I had hoped would be as good as what I had in the dining room yesterday.  One bite told me, it was not. 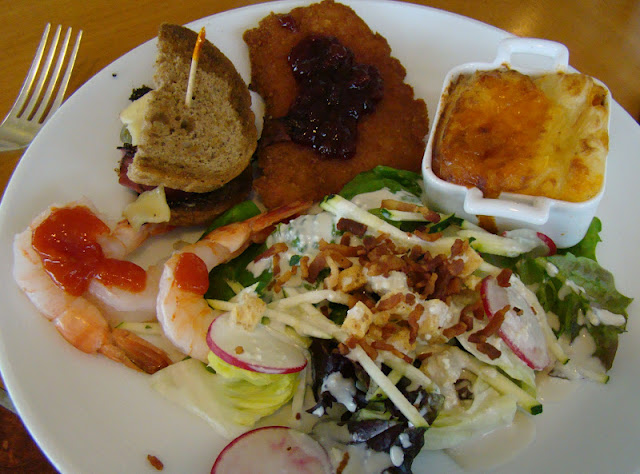 Jamshed brought his plate over & sat down a little while.  He had to rush back & pack for his journey back to CA tomorrow morning.  We said our goodbyes; & I was back at the cabin to start editing photos.  I could have spent hours on them; but I really wanted to go back to the theatre & see the movie, “The Help”.  I had meant to see it back home; & never got around to it.  Such a fabulous movie; I had tears in my eyes when I walked out. 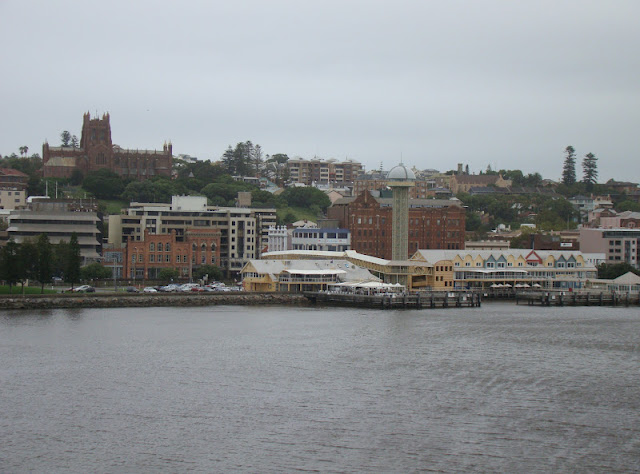 I grabbed my camera & went out to the aft deck for sailaway at 5.  The wind had whipped up; it was very chilly even with my sweater on.  Capt. Glenn had mentioned there would be a surprise salute as we sailed out of the harbor; but we didn’t know exactly what. 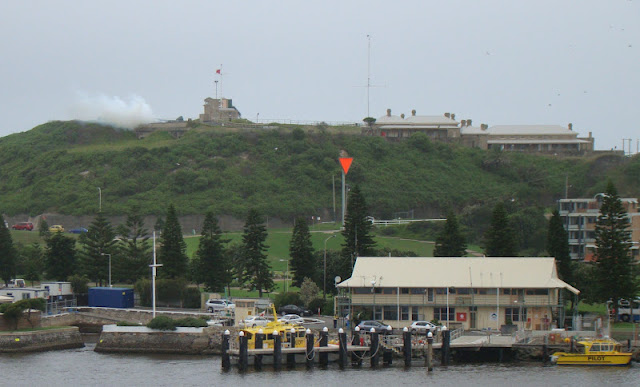 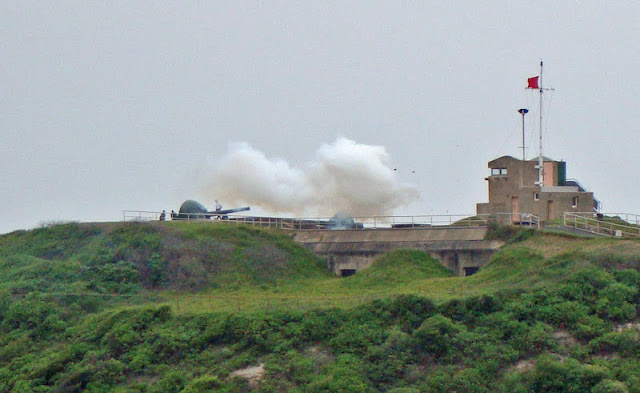 Just before we hit the breakwater, we were passing under Fort Scratchley.  And we were treated to a 3 canon salute from the very canons I had just photographed.  I suppose since this is a maiden call for Crystal, Newcastle felt that was a fitting send off.  It gave me goose bumps; & was quite moving.  I couldn’t stay out long; had to come in & turn the A/C off to warm up. 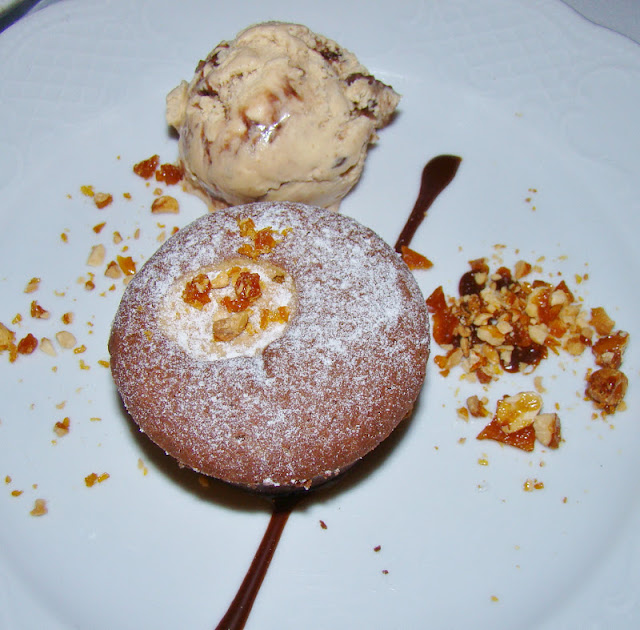 I did some work on the blog before I placed my dinner order.  I had showered & was in my PJ’s by the time Liz returned with dinner at 8:45.  Tonight, I had dessert first (since it was perishable)…..a treat called ‘chocolate & peanut butter express’.  It was a small piece of peanut butter cake with peanut butter ice cream & peanut brittle broken up on top.  Excellent! 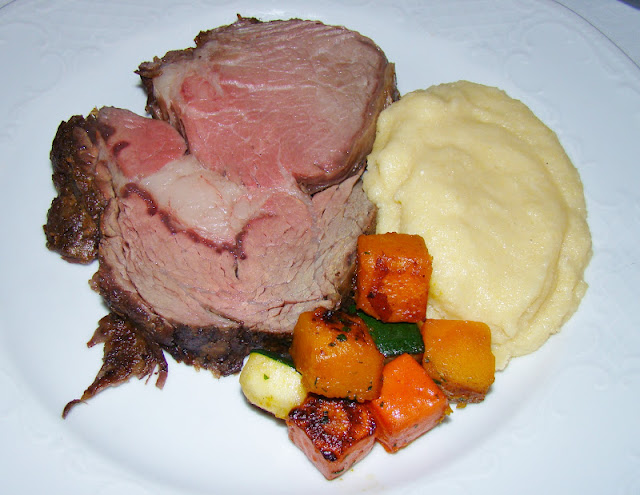 I tackled the entrée next, since it needed to be eaten hot.  It was rare prime rib with horseradish; polenta & roasted root vegetables (carrots, white & sweet potatoes, zucchini).  Nicely tender; & I love their polenta. 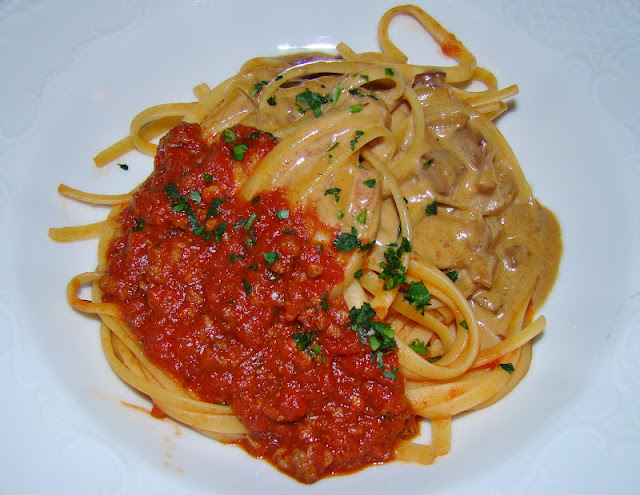 I had asked for an appetizer portion of the pasta special (which will end up being my breakfast tomorrow).  It was spaghetti with one third topped with tomato sauce, one third with Bolognese sauce & one third with a mushroom sauce.  I gave it a small taste; & it is delightful. 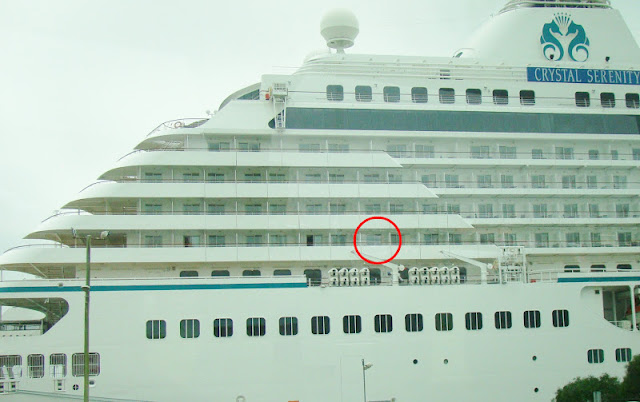 We only have to sail a little over 100 miles to reach Sydney; & we’re barely creeping along.  The wind is making the sea a little choppy, which should make for nice sleeping.  The Capt. had said we will start entering the harbor around 6 (a little before sunrise).  He suggested being up & out right away to photograph the Sydney Opera House.  I’m pretty pooped; & not sure I want to set my alarm any earlier than I have to for my morning tour.  Maybe just leave the drapes open a little so that the sunlight will wake me up.  I am so thankful that I finally felt ‘good’ today.  The weather cooperated; the camera is working again; & I greatly enjoyed my introduction to Australia with the lovely city of Newcastle.