Again my internal alarm clock woke me just before 8.  I turned on the morning show; Rick & Elise were decked out in their valentine red.  Rick had a red bow tie that kept getting twisted around his neck; & he teased Elise about her red & white polka dot dress.  Telling her she looked like Minnie Mouse; a cute one however.  I didn’t do very well with the trivia puzzles; but I did call in when I noticed that a box of valentine candy had been added to the set after they finished showing yesterday’s highlight reel.  I got to go to the library later in the afternoon to pick out my ‘prize’ (leather Crystal luggage tags). 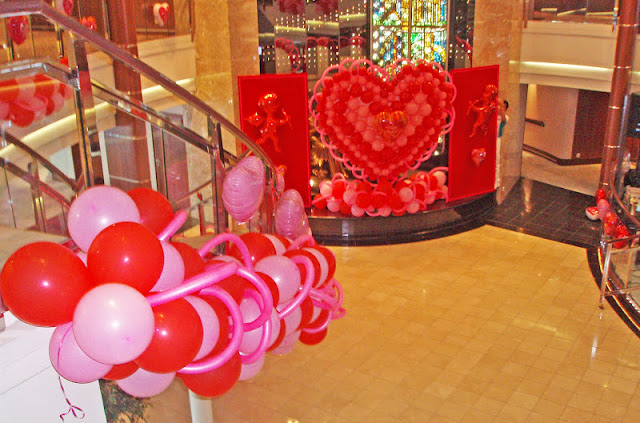 Went down to the Bistro for some breakfast.  The Crystal Cove had been magically decorated for Valentine’s Day during the overnight hours.  Pink & red balloons festooned the stairwell; inflatable Cupids were hanging off the hand rails above; & a huge balloon heart made a beautiful backdrop next to the fountain.  I wore the only thing I had that was red, a sparkly tunic top that was a little bit much for 9 in the morning.  But I did get some nice comments about promoting the holiday spirit. 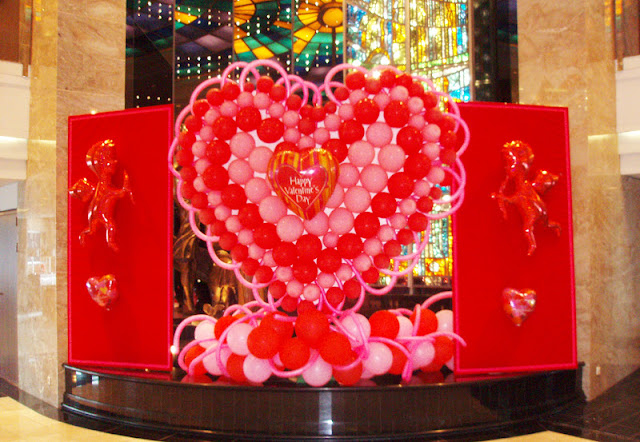 During Capt. Glenn’s 9 am report from the bridge, he stated that the weather was & should continue to be beautiful.  It was 66* outside; we’re still cruising the Great Australian Bight, at 17.8 knots (21 mph) on 3 engines at the moment.  Since we’ve built up “a little in the pocket”, he plans to cut back to 2 engines this afternoon.  The Capt’s thought for the day……”Dreams keep changing; but friends are forever.”

Bridge class was smaller today, as some had conflicts with the Olympic events.  But Pat (snobird cruiser from Cruise Critic) joined us today for the first time.  She knows the game well; but was rusty.  And she fit in quite well at my table of beginners.  We’re still on bidding….enough said.  Afterwards, I went down to the shops to peruse some gorgeous hand painted caftans & other floaty things that some of the shop keepers have been modeling around the ship the past few days.  They are in the most gorgeous ice cream colors; true works of art.  I thought I might purchase something; but I talked myself out of it when I saw the price tags.  The least expensive thing that I liked was $395.  The one piece that I truly LOVED….$595.  In the grand scheme of things, I need to be spending that on replacing my camera; & not something to wear! 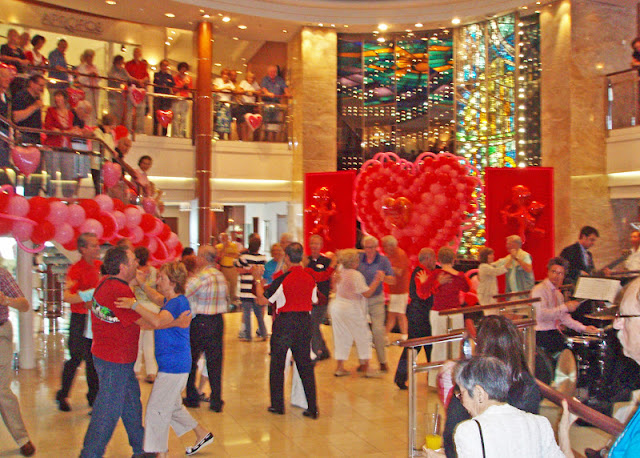 Around midday, there was a Valentine’s mix & mingle party in the Crystal Cove with free drinks.  Curtis & Beverly did a dance number; & 2 vocalists performed.  I got to speak with Keith & Anne Marie & Celeste & Bill a while; & later with Elise.  Lots of people wearing red or pink clothing &/or heart shaped jewelry.  Everybody was hugging & wishing each other H.V.D.  I got more than my share of hugs from my favorite Lido & Bistro guys.  It was such a ‘love fest’ that you didn’t even think about whether or not you had a beau. 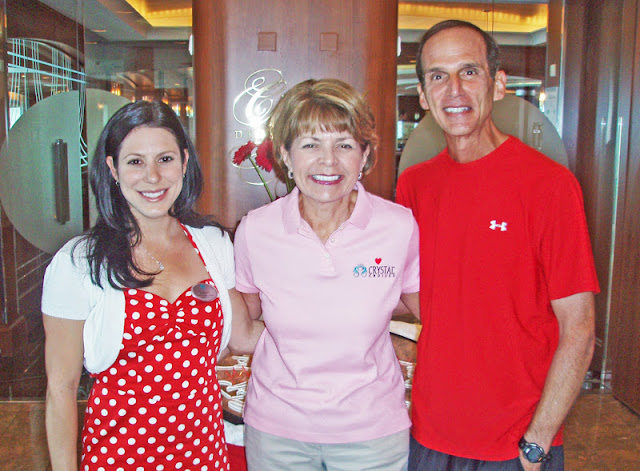 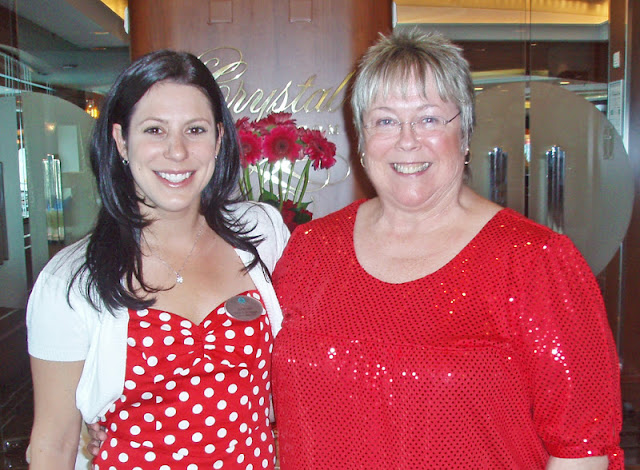 I also ran into Louise & told her that some of us were thinking about meeting in Silk Road to put together a ‘beginner’s table’ during the regularly scheduled social bridge at 2:30.  She said she might come; but I ended up there by myself.  They had about 7 tables of players, who enjoy the social aspect of the game; but aren’t cut throat about it.  Everyone was way beyond my beginner status.  I asked if I could just observe one of the tables; & they said sure.  I did begin to understand bidding a little more; but I also got to see that even good players make mistakes.  I probably learned just as much by watching them as I would have had we been playing ourselves.


It dawned on me that I had missed lunch (how could this possibly happen onboard a ship).  I went up to the Trident Grill about 2.  I had a hankering for a grilled cheese sandwich; & it was fabulous.  Just for good measure I had a cheeseburger without a bun & a few fries.  By then the seas were starting to roll a good bit; & it was challenging to walk a straight line as I made my way to the aft elevators. 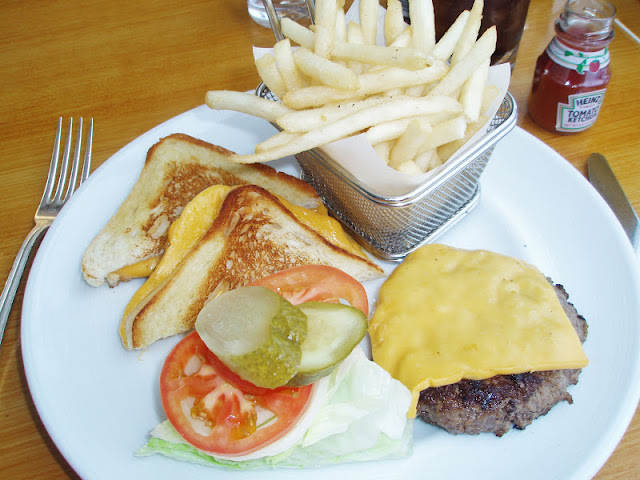 I went back down to the reception area after lunch because we all had a little ‘business’ to take care of today.  The lines were so long this morning; I decided to wait till late afternoon to tend to mine.  Prior to our arrival in Indonesia, there was paperwork that needed to be signed.  There were a total of 8 immigration type forms that the ship had already filled out for us; but they each needed our signature.  With that out of the way, I was free to do whatever or nothing the rest of the evening. 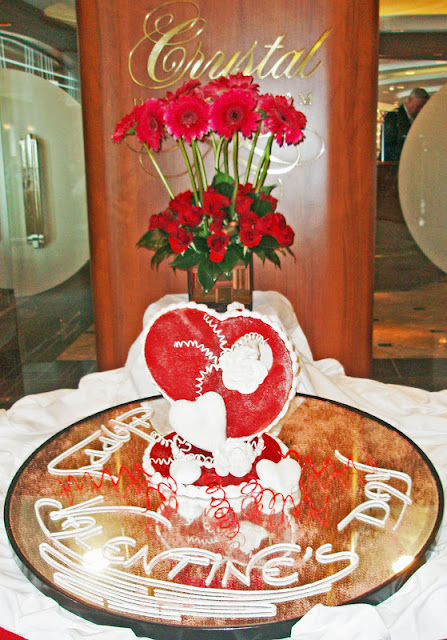 I went back to the cabin to work on the blog & photos.  I also watched the rerun of a lecture from earlier in the day.  It was entitled “Will North America survive & thrive the next ten years?”  It was delivered by Tom Faranda, who is a business consultant & global business forecaster.  His presentation was quite humorous & at times irreverent, pointing out how current global events will impact the U.S. & Canada.  He made me laugh & think; & I look forward to his future lectures.
Liz told me that she lost her women’s single table tennis game last night; but that she is in the 2nd round of the doubles, which will be held tonight.  And following that, one of the passengers (who's initials are K & AM) is throwing a Valentine’s party for the crew in the Stardust Lounge starting at 11 pm.  (No good deed should go unrewarded.)  So, Miss Liz has a big night ahead of her.
I made it a point to order dinner early, hoping that she could finish her ‘chores’ & start getting in the party mood.  My goal for the evening is to put the computer away earlier rather than later & settle down with a book & some Sudoku puzzles.  My Olympic Sudoku competition is on Sunday; & I picked up some more challenging puzzles from the library this afternoon.  I need to exercise my brain with numbers (something other than high card & distribution points in bridge)!
I had a great dinner tonight.  I started with an appetizer; warm mushroom & cheese dip with truffle oil & sesame puffed pastry twists.  OMG, that stuff was so good.  It even had a little shaving of black truffle on top. 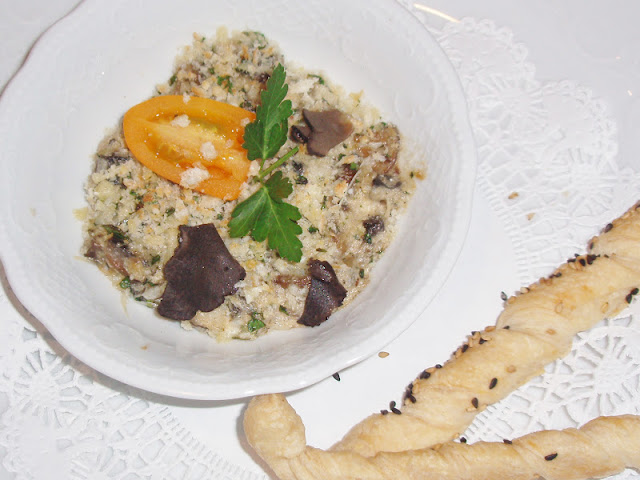 I also had a 2nd appetizer, a small serving of this evening’s pasta special…..2 asparagus raviolis with an herb sauce, sundried tomatoes & toasted pine nuts.  Awesome! 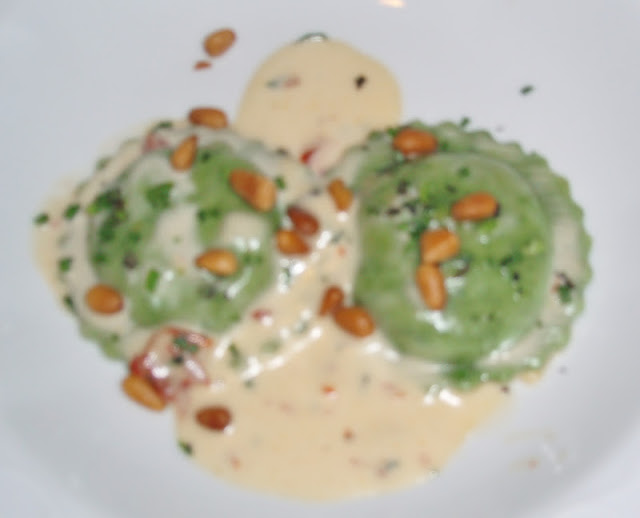 My main course was Australian lamb loin with a cider demi glaze, served with roast vegetable orzo & sautéed spinach.  The lamb was dusted with honey & ground pistachios; cooked just as I requested; & was so tender. 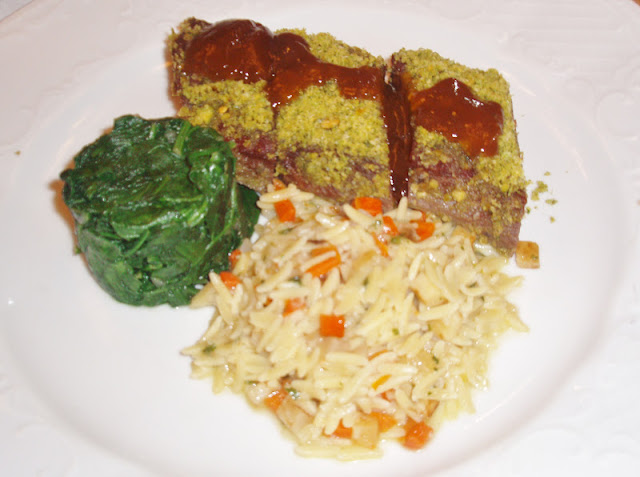 Although I knew there wouldn’t be enough room for it tonight, I couldn’t pass up a dessert called ‘Be My Valentine’.  It was bittersweet chocolate mousse in the shape of a heart with raspberry sauce.  It was plated beautifully with other heart shaped goodies as garnish.  That’ll be my breakfast dessert. 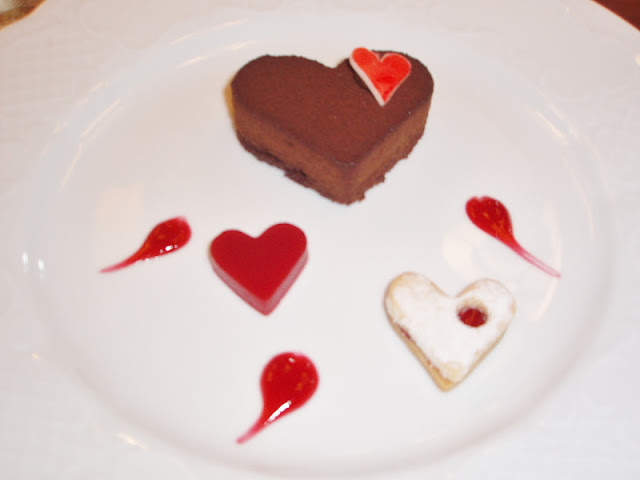 We turn our clocks back yet another hour tonight.  The seas are rolling very nicely; & I may do more sleeping than reading.  The most pleasant thought to take to bed with me…….I still have another 4 weeks to enjoy this fabulous, once-in-a-lifetime adventure!