Eyes open at 8 sharp; who knew I even had an internal clock?  Doesn’t seem to work for me at home.  Logged onto the internet while watching the morning show.  It was slow; but at least I was able to get Fri’s blog up.  I was overly ambitious with the photos, which was part of my problem.  Not quite the same after being in the fridge, but I had last night’s leftover tuna melt for breakfast.  There would be no time to stop at the Bistro this morning before bridge class.


Capt. Glenn’s morning report revealed that we are still sailing in the Tasman Sea at 17 knots (20 mph) on 3 engines.  We should be able to coast right on into Newcastle early tomorrow morning.  He expects the weather to be perfect today, around 80.  Today’s quote….”You can’t change the direction of the wind; but you can adjust your sails.”


Since this was the last sea day of this segment, today’s was the final lesson for the ‘beginner’ beginner’s bridge class.  About ¾ of us will be continuing onward; & want to continue to learn the game.  After the ship ‘turns around’ in Sydney & they get a chance to see how many new ‘beginners’  will sign up for classes, Eddie & Rachel will decide at that time whether to separate us or teach us all at the same level.  I don’t think it matters to me either way, except I would like class to be at some time other than 10 am.  I gave up Photoshop classes on this segment so I could stick with bridge.  I am confirmed for Photoshop classes starting in Sydney; & they will also be held at 10 am on sea days.  Today I was partnered with Mr. Kim; & he basically ‘carried me’.  He has a keen mind & grasp of the game; so he kept me from making too many costly mistakes.


After bridge, I stuck my head into the computer center to inquire about the memory card I dropped off over 2 weeks ago.  Jackie said she would see if she could work her magic & retrieve the photo of my limo driver from the (supposedly) erased card.  I didn’t realize that Jackie left the ship in Honolulu for vacation; & nobody else knew about my ‘problem’.  Jessie promised to look for it; & call me later.


Instead of going to the library afterward, I went to the Bistro.  I can’t go more than 2 days without a capp. fix.  It was fairly quiet; & I read about an hour.  Scott Mitchel was playing in the Crystal Cove during an exhibition of the artwork created by those who have been taking the art classes.  Everyone did very well; & some were outstanding.


When I went down to check out the lunch menu, I saw Celeste & Bill playing backgammon in the Cove.  I sat to chat a little bit; & they invited me to join them for lunch in the dining room.  We had great fun & shared a delicious meal. 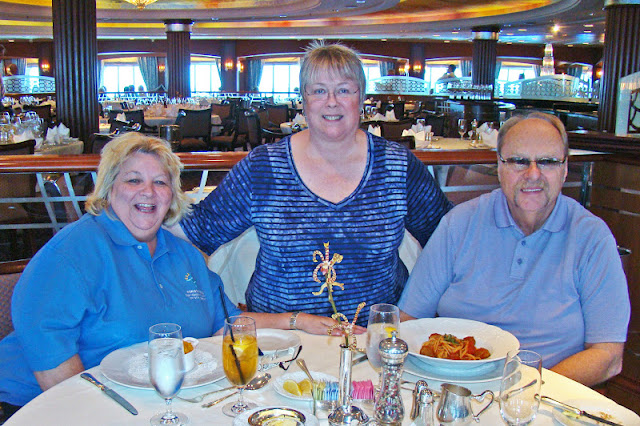 The bay scallop Caprese salad sounded appealing.  Thinly sliced tomatoes were topped with tiny bay scallops, basil, olive oil & lemon.  It was pretty on the plate; but the flavors were very subtle.  I don’t think I’d order it again. 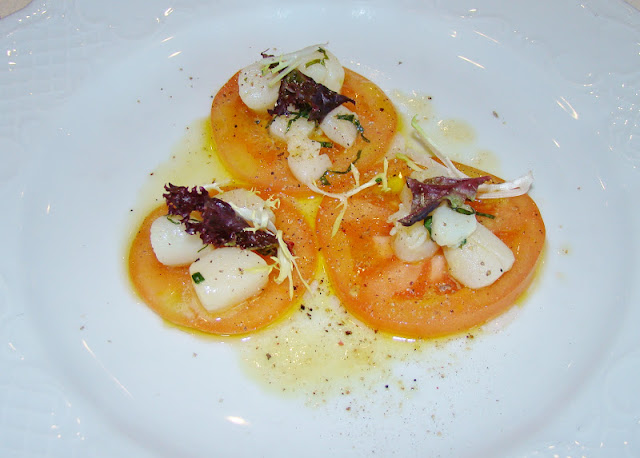 The cottage pie entrée was a big hit with Celeste & I.  It’s similar to a shepherd’s pie with ground beef & braised veggies in stout beer; topped with a cheesy potato cornflake crust.  Flavors were robust; & the serving size was just enough; not too much. 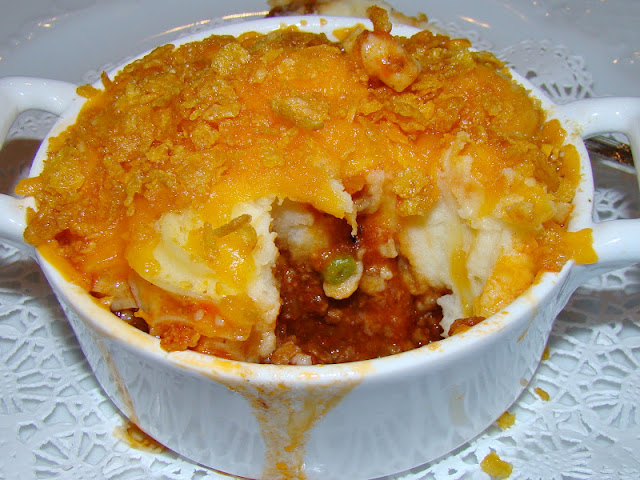 We parted ways after lunch; & I returned to the cabin to work on yesterday’s blog.  Although I haven’t been outside today; I’m sure things are hopping around the pool deck.  It’s a simply gorgeous day, upper 70’s.  Light whitecaps are creating a nice, relaxing rolling on the ship.  In a short while Jessie from the computer center called to say that he was able to find & retrieve most of the lost photos.  The particular one I wanted was damaged; but he was able to salvage most of it.  Well, that was a relief anyway. 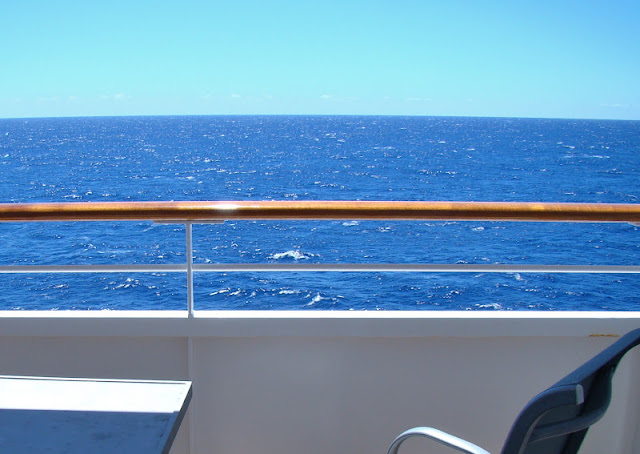 Celeste has been taking the memoir writing class; & this afternoon the 3 best entries were going to be read aloud.  Hers was one of the chosen ones.  Knowing her sense of humor, I was anxious to see how she would put her thoughts on paper.  They had 3 of the professional entertainers (Bruce McGill being one of them) to read each entry.  All three short stories were outstanding. Celeste’s was a comical account of her (city girl) introduction to southern living early in her marriage back in the 70’s.  Being a southern girl, I could certainly relate.  There was definitely some talent in that room.


I took a flash drive up to the computer center, where Jessie transferred my missing photo file for me.  Even though the bottom half of one photo is lost forever, I am grateful to him for salvaging what he could.  When I got back to the cabin, that is when I discovered something was seriously wrong with my primary camera (my beloved Sony CyberShot).  When I turned it on, the lens did not telescope out of the camera body.  The display window showed “turn the power off and on again”.  I did that, several times.  Switched batteries.  Checked the owner’s manual (which after 4 years I still carry around with me just in case).  No clues.  Photography people ‘closed’ in preparation for formal portrait taking tonight.  The thought of having to take the little Olympus point & shoot on tour tomorrow in Newcastle is distressing.  The thought of having to camera shop a third of the way through this adventure…….devastating!  (I’m having a deja vu’ moment……a flashback to Norway 2008 when my previously beloved Olympus died on the last day of the cruise.)


There was a beautiful, fiery ball sunset tonight.  I did the best I could with the baby camera. 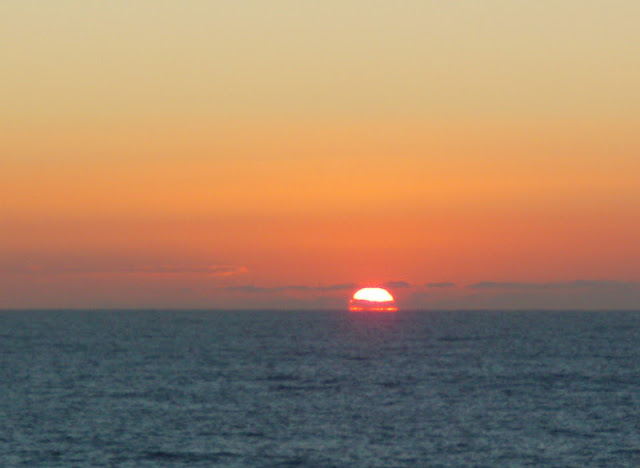 It’s the Captains Farewell Reception & Dinner tonight.  In other words, formal.  I’m just not feeling it.  But it is one of my favorite menus; so I ordered in.  Liz brought it about 8:15.  A longtime favorite appetizer has been the chicken liver parfait.  The bottom layer is pear confit (a sort of marmalade, if you will); middle layer is honey-red wine gelee; the top is a blob of chicken liver mousse; & it’s garnished with a thing sliver of black truffle.  Maybe it’s my taste buds; but I didn’t think it was a great as I remember. 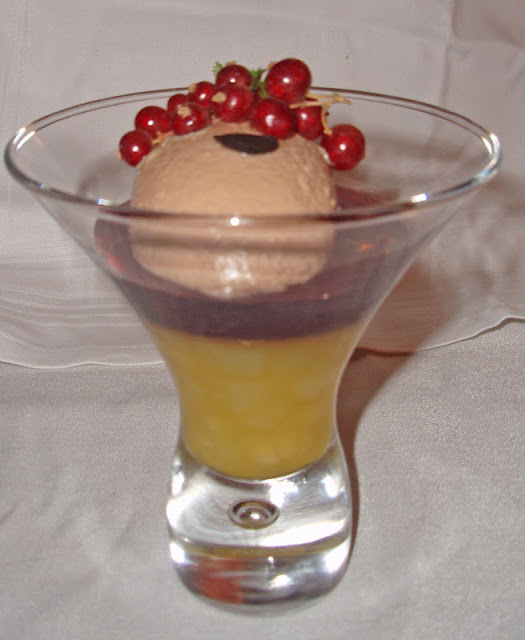 I ordered an appetizer portion of the pasta special, which was angel hair tossed with truffled pesto; garnished with navy beans, new potatoes & bay scallops (this has been my day for bay scallops).  I only had a taste; preferring to leave the rest for my early breakfast.  But it was delicious. 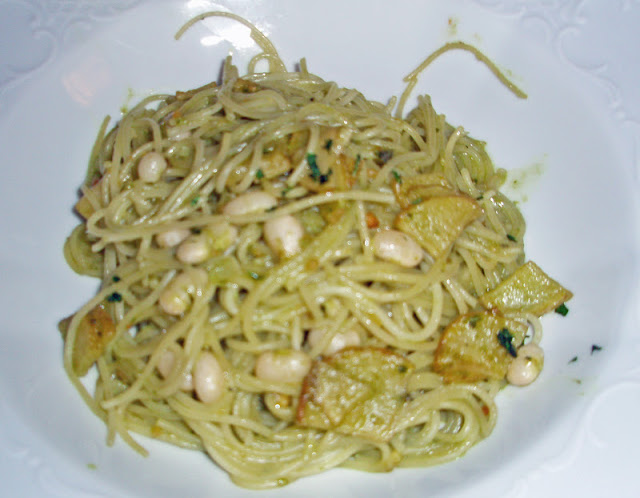 My main course was the traditional broiled rock lobster tails with hollandaise sauce.  I asked to substitute the veggies with the champagne sauerkraut.  I may no drink champagne; but I LOVE this version of sauerkraut.  The subtle wine flavor replaces the familiar vinegary sauerkraut taste.  It was an excellent meal! 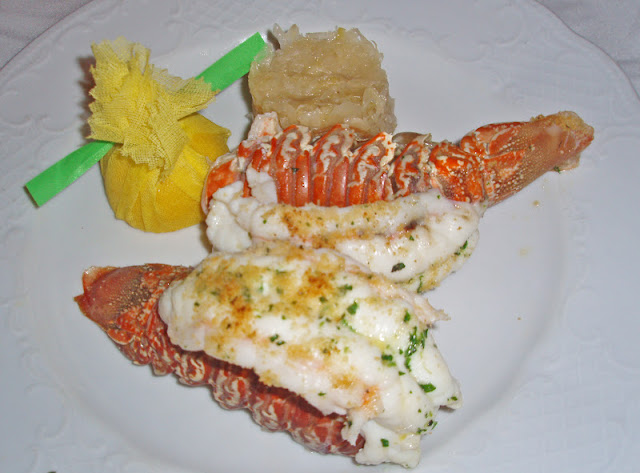 I’m so bummed about my camera; I’m not even in the mood to read.  I am tired; & hope I can get right to sleep.  Alarm set for an early morning tour of Newcastle.  Tomorrow will be the final full day of the cruise for quite a few passengers.  For the rest of us, it’s the start of a very port intensive stretch of the voyage.  There will be very little rest for the weary from here on out.

Hang in there Becky. We are enjoying your blog so much every day! Thanks for all the information and beautiful photos!

my point being ...I love your photos!