February 18th
On the road again……

I’m so relieved to be sleeping well again.  And I guess I’ve adjusted to the crisp, ironed sheets.  I sleep on bamboo sheets at home; & they’re buttery soft.  I suppose it would be tacky of me to ask Liz not to change my sheets so often.  Just as soon as I soften them up; she puts new ones on.  I can’t complain…at least I’m not the one having to change & make the bed.


I was awake before the morning show started.  And I was lucky enough to notice that Elise had swapped her name badge during the highlight reel.  I was the first to call in; & won another nice prize (a purse size LED flashlight).  Rick asked me if that was the only thing I noticed.  I admit, I missed it at first…….& blurted out ‘holy cow’, you switched yours too.  He gasped & started saying ‘bleep, bleep’.  I think he thought I said ‘holy crap’.  And for those of you who know me well, even that would be a milder version of what usually comes out of my mouth.  But I was positive (& reconfirmed it on the replay) that I did not swear.  So, I made it a point to tell Elise at the Crystal Society party tonight; so she could pass it on to Rick.


I got to the Bistro before it opened; & Cathy Rigby came in early too.  She sat at the table next to me; & I commented that she was dressed up as if she were going to the office.  She laughed & said she would get comfortable again after her morning lecture (which I had to miss because of bridge; but caught later on TV).  I noticed that she was looking out the window, kinda lost in thought.  After a while, I asked her if her normal life was so busy now that she never had time to just sit & ‘smell the roses’.  This eased into a really nice conversation about teaching herself to slow down as she got older.  She said she has a ‘fairy garden’ in her back yard at home with a koi pond, song birds.  She likes to start her day out there whenever she’s in town.  It puts her in a Zen mood.
She told me about her new granddaughter; & she’s leaving the ship when we arrive in Bali so she can rush back home to pinch her little cheeks.  I realize we’re close to the same age; but when you stand next to this tiny person…..it’s hard to picture her as a grandmother.  She’ll always be that blonde haired, pig-tailed pixy on the balance beam.  I’ve enjoyed her talks, never realizing what an unhappy home life she endured & overcame.  She is a true champion.  And where was my new camera to capture this momentous occasion?  Forgot it back in the cabin, still charging.  The one thing I don’t care for about the new camera is that you have to charge the battery while it’s inside the camera.


Capt. Glenn’s morning report said we are sailing just 65 miles off the west coast of Australia in the Indian Ocean.  We’re traveling at 20.5 knots (24 mph); a speed that we should maintain for an on time arrival in Bali Tues. morning.  His thought for the day….”Yesterday is history.  Tomorrow is a mystery.  Today is a gift; that’s why it’s called the present.”


Bridge wasn’t too challenging today.  I felt confident when I left.  Louise had a conflict; & she was absent.  But Yoko joined Elaine & me at our table today.  And Eddie (instructor) filled in.  I had shot some photos of Debbie with the animals yesterday; & I copied them onto a flash drive.  So I dropped it off at the shore excursion desk after bridge. 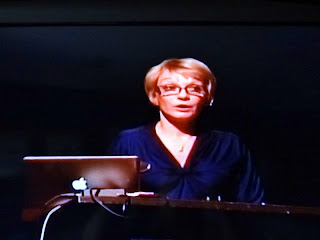 Before lunch, I went back to the cabin to watch Cathy Rigby’s talk.  She gave credit to her older brother who (as a diversion from their rough situation at home) took her to a local youth center to try out their new trampoline.  She said for the first time she felt ‘free’, flying up in the air; & she became addicted to it.  By age 10 she began devoting her life to gymnastics; eating one meal a day & training 6-8 hrs. every day.  Her coaches constantly rode her about her weight (usually less than 95 lbs); & this is when she learned about eating & purging.  The new road that she was traveling was costing her her life & her dream.  And by the age of 15½ she was almost a ‘has been’.


She now states that she has lived two lives.  Her first in gymnastics; & her 2nd when she decided to take singing & acting lessons.  Things started to fall into place after that; she found acceptance & happiness in her 2nd career.  It’s a sweet story; & she’s in a very good place now. 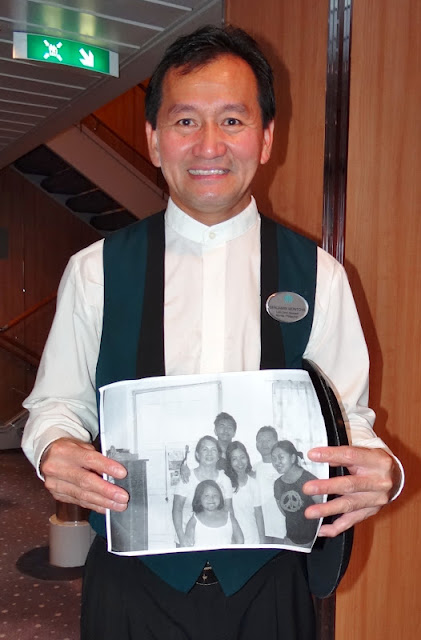 I went up to the Lido for lunch; & ran into Benjamin.  He finally remembered to bring his family photo to share with me.  He has a beautiful family; & he showed great pride in telling me each of their names & what they’re doing with their lives now.  He said it was okay to share the photo with you all. 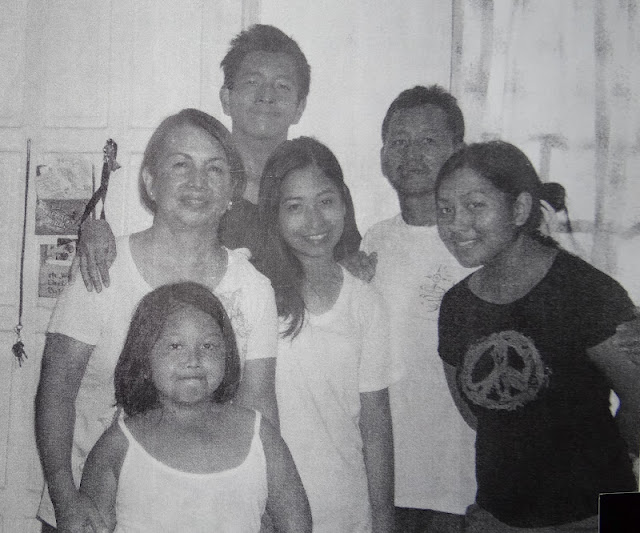 I had a great lunch; some salad, a tuna melt, spicy beef turnover, a taste of the grilled ocean perch with basil sauce, some fried mushrooms with tartar sauce & some grilled veggies. 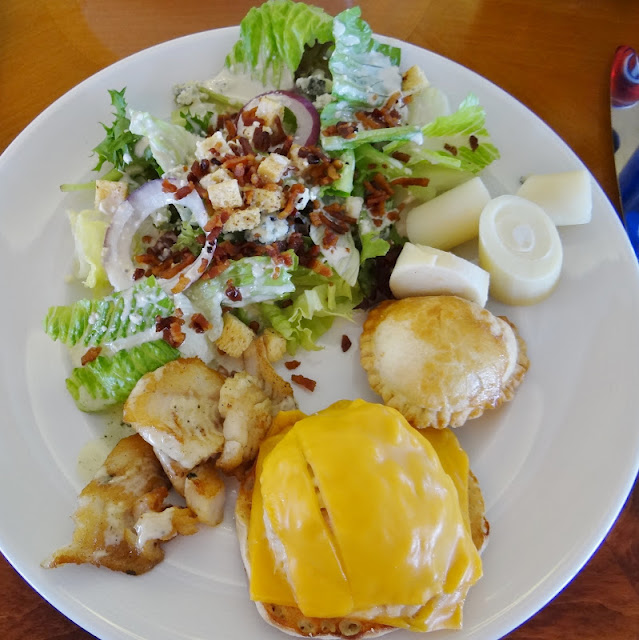 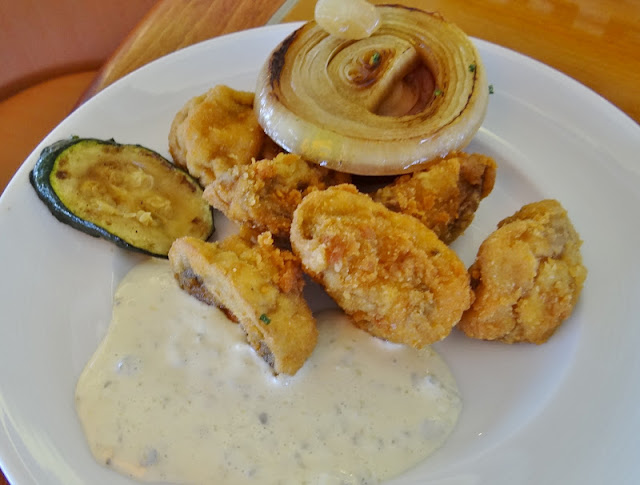 After lunch I had a nice long chat with Petar (who used to serve when I dined at the Chief Engineer’s table).  He’s just the sweetest guy; & he’s starting to think about leaving ships & starting a normal life with his (shore excursion dept.) girlfriend, Jelena.  He cracked me up talking about how she gets jealous because he loves his vintage BMW as much as he loves her.


I spent a good bit of time online this afternoon, uploading photos.  I was able to watch Tom Faranda’s lecture (“Will China & Asia Survive & Thrive the next 10 years”) during those loonngggg uploads.  After a couple of hours I was tired of looking at the computer screen; so I went out on the verandah to read for a while.  Finished my 3rd book.  The temp was just perfect; & those wispy, cirrus clouds were still around.  Small whitecaps on the water.  Very soothing out there. 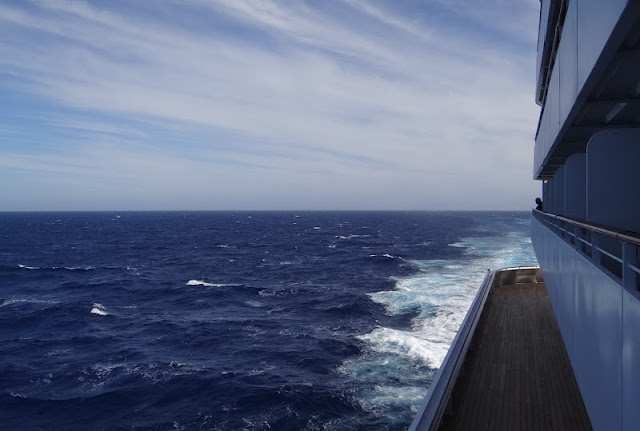 I had to scurry to get showered & formally dressed for the Crystal Society cocktail party which started at 5:15.  It was one of those days when everything seemed to go wrong.  I couldn’t get my bracelet clasp to catch; I couldn’t hit the hole with my pierced earring.  My feet were so swollen my good heels wouldn’t fit.  I had to go up the elevator holding my shoes, fanning myself, hair now soaking wet.  I looked like something the cat drug in….only in formal attire.  I was late for the party; the only passenger friends I saw were Louise & her S/O, Vic.  We chatted a little while; & then I had a short chat with Elise Ivy about that morning show incident. 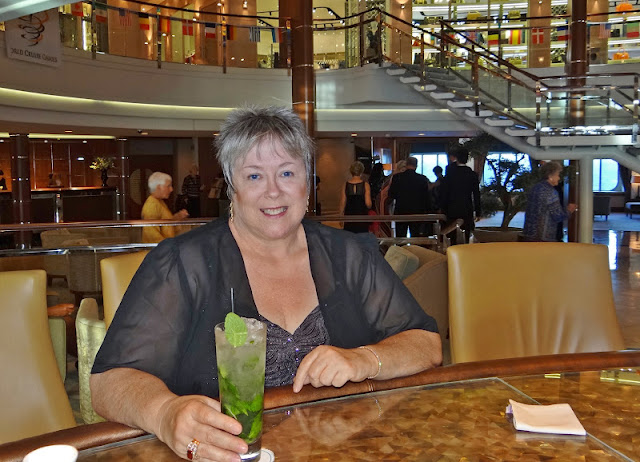 Not quite knowing what to do with myself, I went down to the Crystal Cove & took a seat at the bar.  The ship’s photographers were taking formal portraits in the Plaza; & I thought I’d people watch for a while.  I actually ordered a drink…..a mojito.  The bartender lady wasn’t busy; & we started talking about all the signature cocktails that a famous mixologist has created for Crystal ships.  So many things on the cocktail menu looked so good.  The mojito went down pretty quickly; so I asked her to fix me something ‘fru-fru’.  She made a pink flower (sorry, I already forgot what’s in there besides fresh grapefruit juice).  It was pretty; but a little too bitter for my taste.  I also enjoyed a lovely individual tray of appetizers with my drinks. 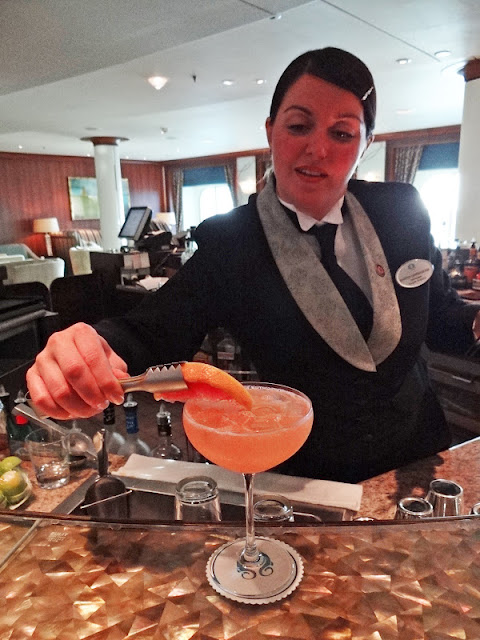 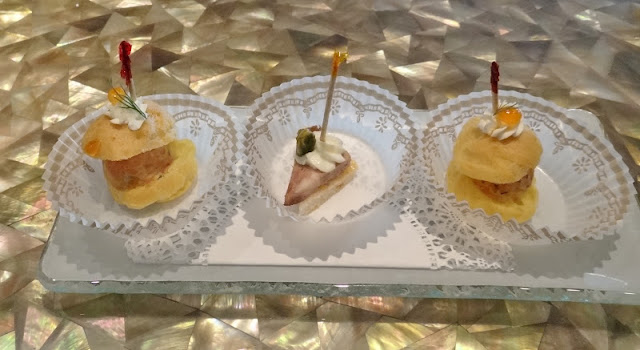 A few friends passed through on their way to dinner.  I asked Peggy, Elaine, Keith & Anne Marie to pose for a photo. 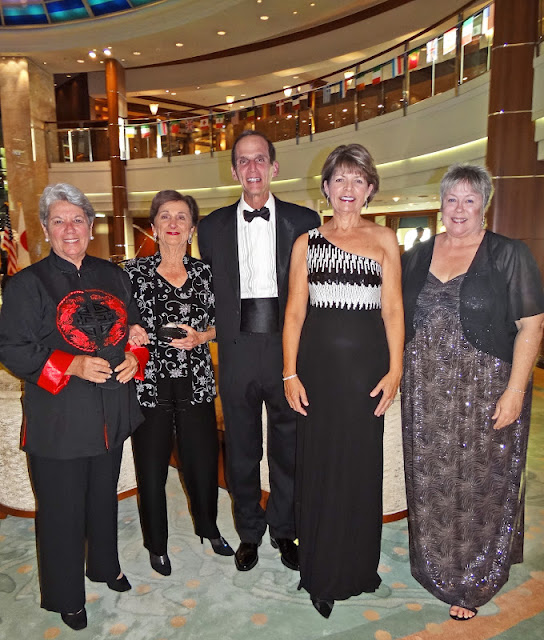 As I was walking out of the bar (about to head up to the cabin), someone called my name.  It took me a second but I recognized her as Gayle (& her husband, Ken) who I had gone on tour with a few days ago.  I stood & talked with them quite a while.  They asked if I would like to dine with them; & I thought why not.  Leo nearly fainted again when I walked into the dining room (as it’s about as rare as getting struck by lightning).  They are dining in the open seating section; so having a 3rd at the table for 2 required just a minor table adjustment.  We had a wonderful meal; & they were just delightful to chat with.  And would you believe, after all these years, I FINALLY got to sit at Kemal’s table (my Turkish waiter friend)?  And he provides very gracious service, as I’d expected he would.


Gayle’s not a big fan of having her photo taken; so I just took photos of my meal instead of the table.  It was French night; & I had to have the obligatory escargot bourguignons.  In fact, all 3 of us had it. 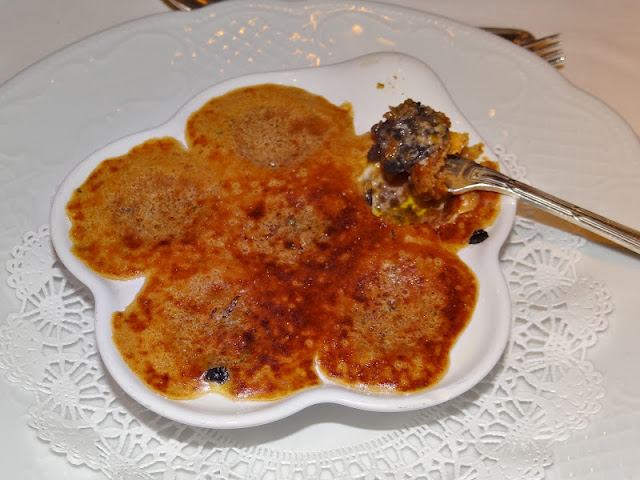 I was also temped by another one of the appetizers.  Three profiteroles each filled with a different flavored mousse.  One was cauliflower, one green pea & the other butternut squash.  It was accompanied by a truffled tomato coulis.  This one was good; but it was more beautiful than it was delicious. 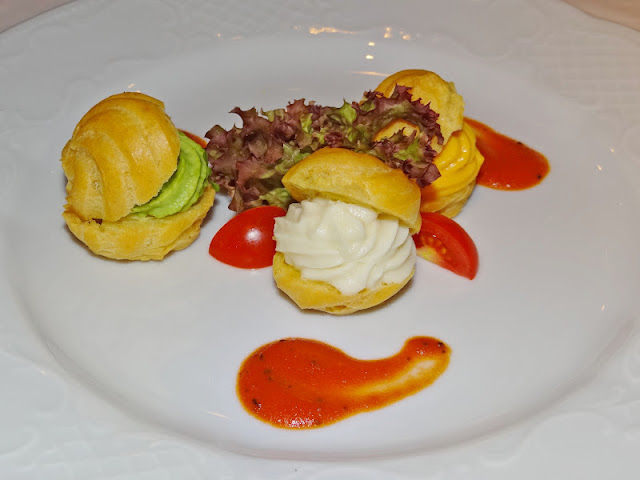 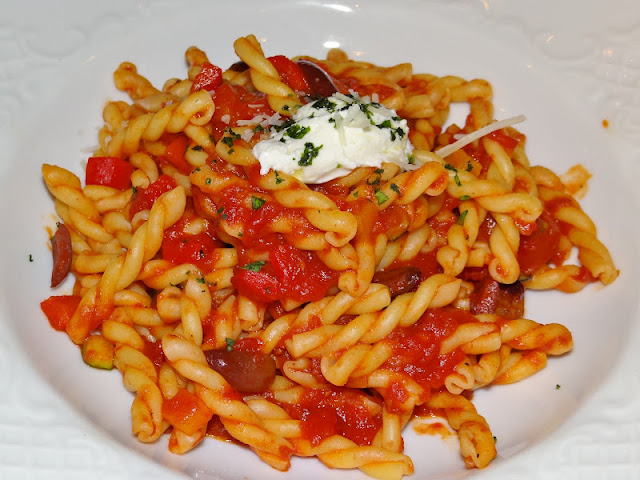 As I was leaving the dining room, Kemal & I posed for a photo; & then I had to get a photo with Petar.  I will certainly miss him if he makes the transition back to the real world. 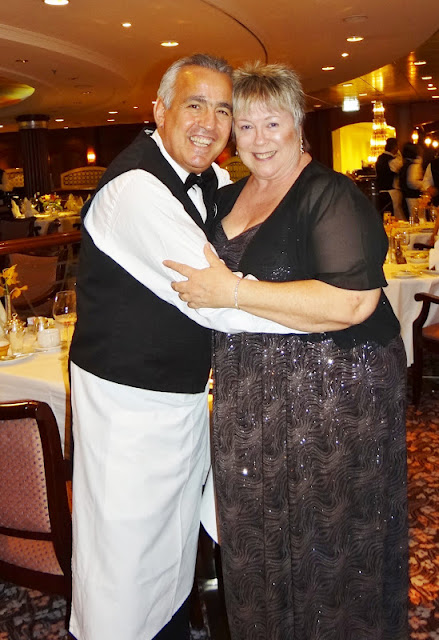 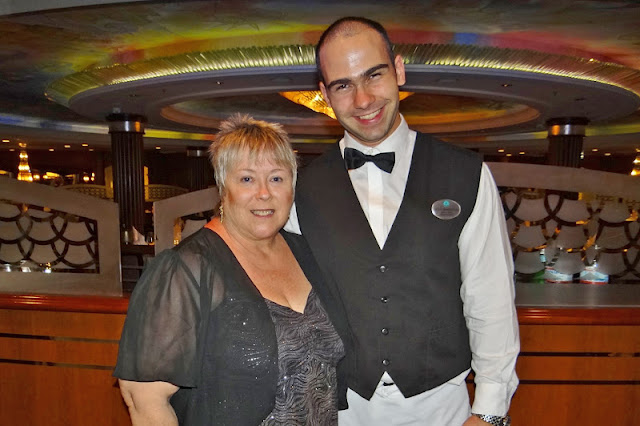 When I got back to the cabin Liz was in the corridor talking with her supervisor.  I recognized her for previous cruises.  And I stood out there talking to Liz & Snehzana (pronounced SNAY-ja-na) for about half hour.  I wanted to tell Snehzana what a delight Liz has been; working around my quirky requests.  We talked haircuts; & their Olympic competitions.  Such nice people work on this ship.  And you might never know how special they are if you don't get them to talk about themselves.

I tried to get some things uploaded on the computer when I got back home; but it wasn’t cooperating.  So, I gave up.  I contemplated starting another book; but I fell asleep before I could decide which one.

Just wanted you to know how much my husband and I enjoy your blog: your wonderful pictures and candid commentary.

We also appreciate the time it takes for you to do this so thanks for sharing.

You looked lovely on formal night. Eat in the diningroom more often!

Becky, thanks so much for another great installment and love all the picts and your write ups. Looking forward to finally cruising with you in 2013 and we'll have to have a meet up in the Bistro.