February 24th
At sea in route to Singapore


I think I slept about 11 hours; & felt ‘hung over’ this morning.  Glad that this was a sea day; with nothing that I HAD to do except go to bridge class (probably my last class).  I just lolled around in bed, watched the morning show.  They showed the highlight reel from the last 2 days; & a lot of my friends had camera time.  Unfortunately, my 3 seconds on TV showed me bedraggled as I was coming back onboard after yesterday’s marathon excursion.  In the middle of the trivia question portion of the show, Rick came up with an ‘off the cuff’ question.  What U.S. state is bordered by 8 other states?  When nobody called in right away, I had to call & let them know it was TN.  I told Rick I was a TN girl; & he yelled “Go Volunteers”.  Just after I hung up the phone, he said “can you call right back”?  When I did he said he’d send a bottle of wine to my dining room table tonight if I could sing the Volunteer fight song.  I’m embarrassed to say, I had no clue.  And even if I did, I wasn’t about to sing it on TV!  And what was I going to do with a bottle of wine?  I don’t drink wine; & I don’t have a dining room table?  And I saved Rick a few dollars from the prize fund.


On my way to the Bistro, I stopped at the photo gallery to take a look at the 3 medal winner’s photographs that were now on display.  I have to admit they were outstanding!  Christine & Lianne explained how & where each photo was taken.  The 1st place photo was taken underneath a set of clear stairs in the Apple store (not sure which port).  2nd place photo was taken in a high rise mall, from the top floor looking down to the ground floor.  The 3rd place photo was of John Mentis playing the clear, Lucite piano in the Crystal Cove.  What was so amazing about it was it was taken from over the railing above & showing a mirror image of him from the reflection in the Plexiglas panel below the brass railing.  A good photographer can find a great shot by looking at ordinary things in extraordinary ways.  My hat’s off to these 3 photographers.  My submissions were definitely not in the same league as theirs.


These are photos of their photos; & they may not do them justice.  They really were oustanding! 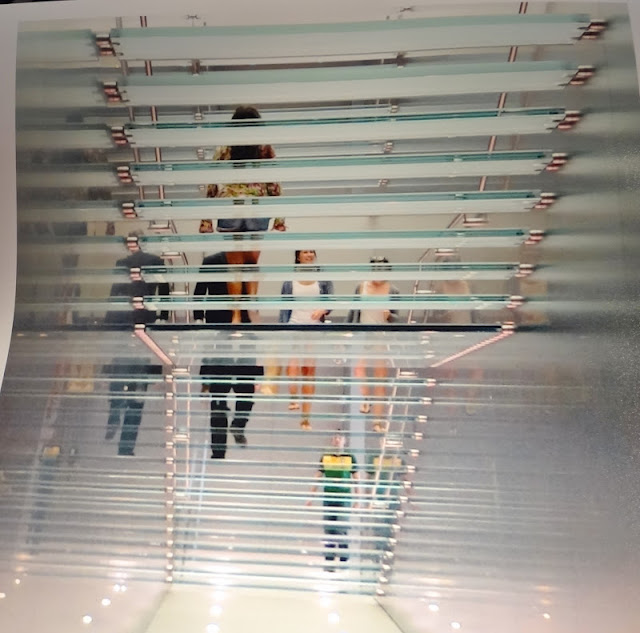 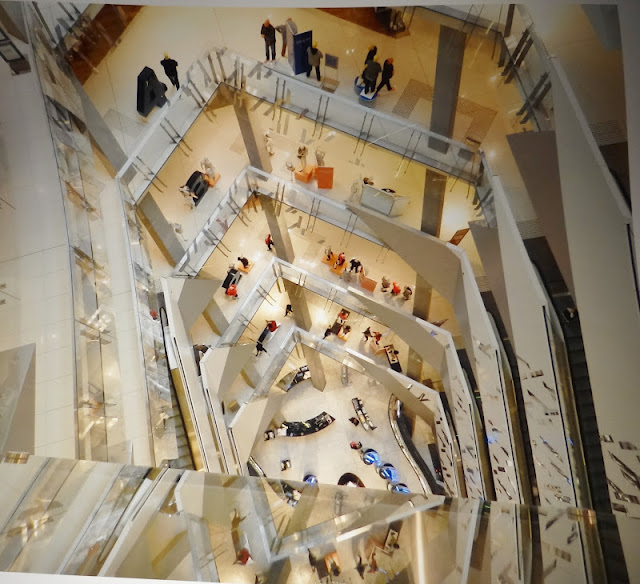 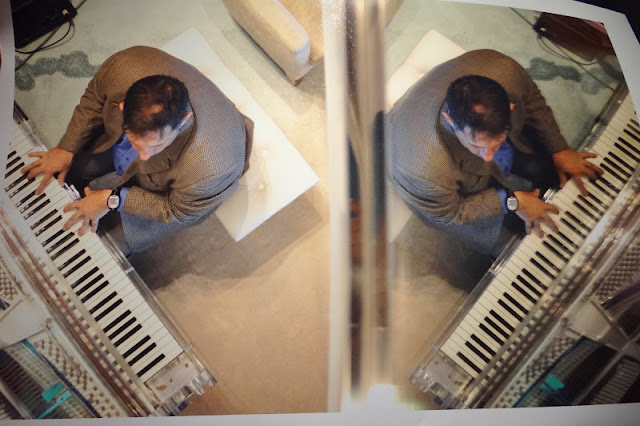 Here are my submissions: 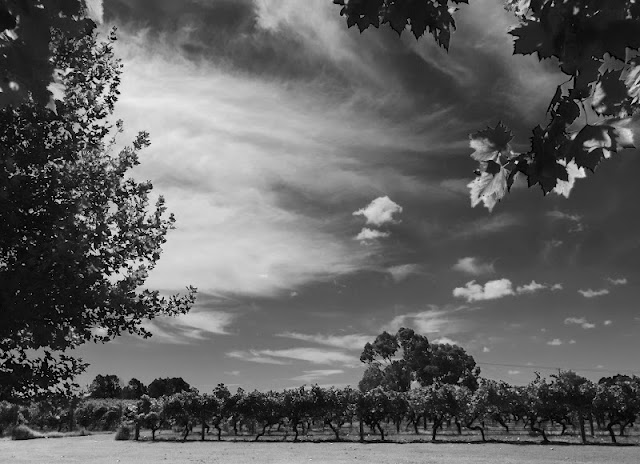 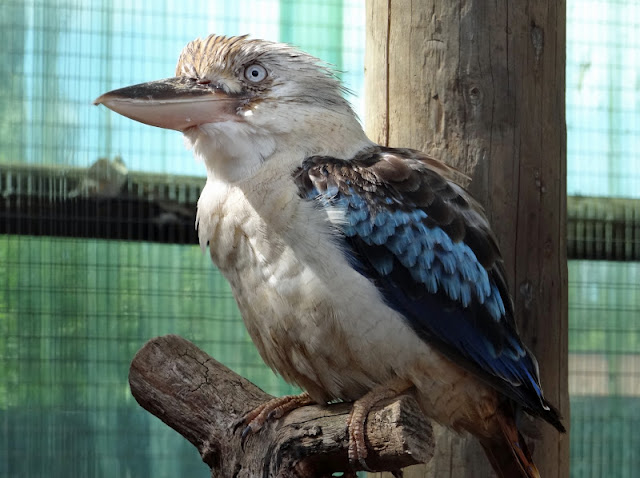 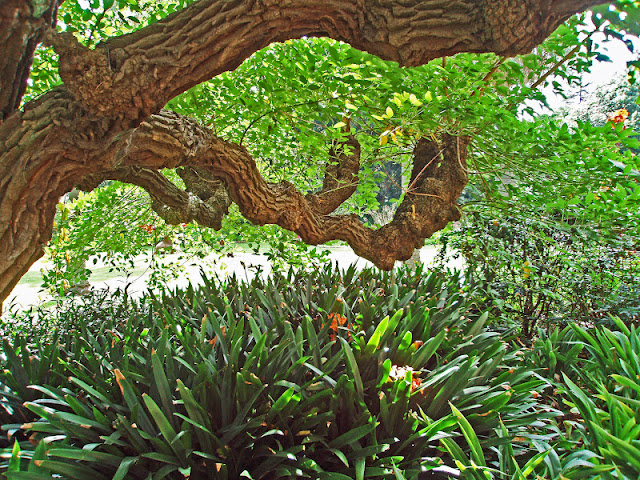 I missed most of what Capt. Glenn had to say this morning.  But I did get his thought for the day….”A mind once stretched by new experiences can never go back to its old dimension.”


When I went in the Bistro for breakfast, I saw Celeste & Bill.  I pulled up a chair; & we exchanged stories about our tours in Java yesterday.  Guest lecturer, Tom Faranda came up to speak to them; & she introduced me to Tom & his lovely wife.  I told him that even though I wasn’t able to attend his lectures in person, that I had watched & enjoyed each one replayed on TV.  Tom said, “You’re Becky”?  I thought, oh no……  Keith & Anne Marie must have mentioned my name & our blogs.  Then he told me he got an email from a relative saying she had ‘heard’ that he was lecturing onboard the Serenity.  He was shocked because he had forgotten to let her know where he was going.  She saw it on the Cruise Critic message board; & then read about it on my blog.


So, Tom asked me to give a shout out to Linda; & confirm that YES, he has been doing a fantastic job lecturing the last 2½ weeks on Serenity.  Sadly, they will be leaving the ship in Singapore day after tomorrow.


I was so busy talking I never got to the breakfast buffet.  And then I was rushing off to bridge class. But I did ask Adrian if he would sneak back there & get a Portuguese custard tart ‘to go’; & he did.  In bridge class we got right to game play.  Rachael had set up several set hands with each table playing the same dealt hand.  They were testing to see how we all would play the same ‘game’.  We did pretty well, as long as Eddie was standing over us giving subtle hints.  I knew this would be my last bridge lesson since I have committed my sea days on the next segment to Photoshop classes.  I was teary eyed saying goodbye to those who are leaving the ship in Singapore & to Rachael & Eddie, who I have grown very fond of.


I went back to the cabin & started work on the blog.  Bali seems so long ago; so I decided to write yesterday’s thoughts while the feelings were still so fresh in my mind.  So, I am even writing today’s entry out of sequence.  I just hope after Singapore, I am able to go back to Bali & the sea day that followed & do it some sort of justice.


About 1 pm, I went up to the Lido for the American buffet.  I chose well, only taking the things I truly love from this menu.  I had okra fritters, southern fried chicken salad, BBQ ribs, onion rings, prawns & jambalaya.  Everything was fantastic. 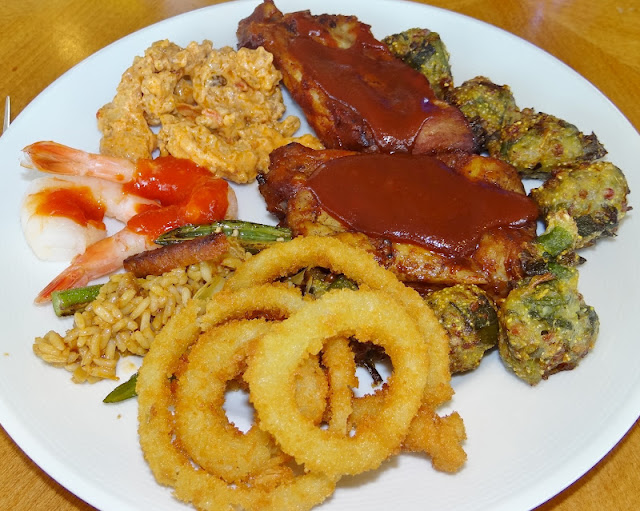 As I was leaving the dining area, I saw a gentleman over by the window who was carving something.  I was curious; & I asked if I could see what he was working on.  He introduced himself as Chuck; & he’s on his 10th world cruise.  He had a large geode of alabaster & an assortment of carving instruments.  He showed me a photo of a bronze sculpture of a rifle with the barrel tied in a knot.  (Interesting subject to capture in alabaster.)  He was trying to carve it on a much smaller scale.  He had already spent so much time on it; & was honestly ready to start on something else.  But he wanted to present it to a friend as a gift eventually. 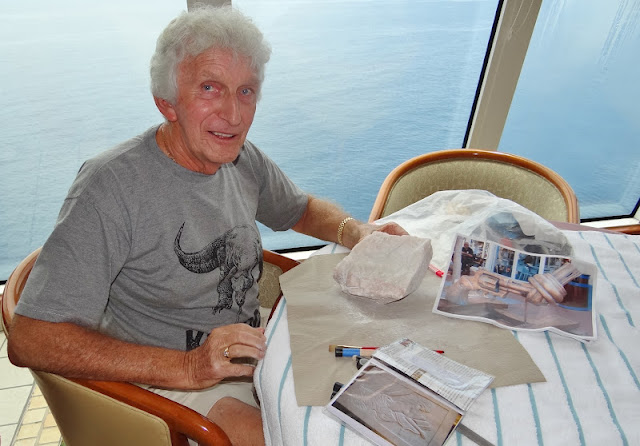 He showed me a small photo album of other work he’d done.  One that really caught my attention was a half nude woman, lying on her stomach reading a book.  It had such great detail & depth to it.  He said he saw this ‘nude’ hanging on a wall somewhere here on the Serenity a few years ago.  He took a photo of it; & then carved this beautiful piece out of a slab of alabaster.  He said that one of the guest lecturers that will be coming onboard in Hong Kong is a master sculpture; & he was really looking forward to that.  I enjoyed my chat with Chuck, hearing his story & seeing his work. 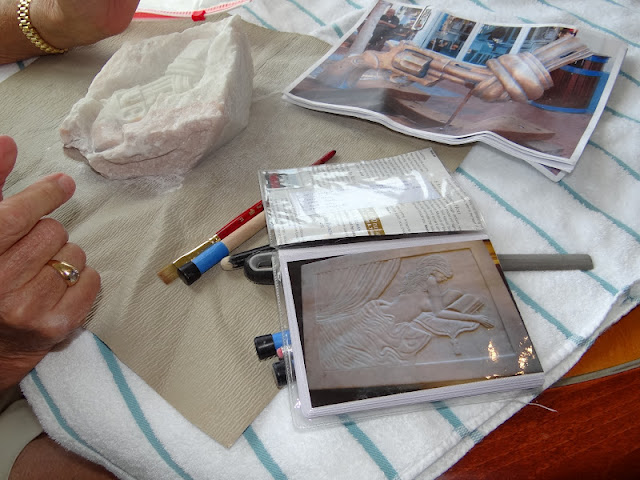 I decided to postpone doing laundry one more day; but it meant I had to hand wash something to wear for tomorrow morning’s tour.  I needed to work at the computer.  While doing so, I was able to watch several of the lectures from earlier today & saw a video tape of last night’s show, a performance by a local group of dancers & musicians.  The costumes were gorgeous & full of color.  The music was “tolerable” (I’m quoting from Bill’s description of his night at the Sydney Opera House).


I watched Tom Faranda’s final lecture of the series, “Why America will thrive in the next 10 years”.  If only, the news media could spoon feed world events to me in such an easy & humorous manner.  Afterward, I watched Dr. Sydney Finkelstin’s equally humorous ‘top 10 lessons’ that he’s learned about life.  And to get myself psyched up for Singapore, I watched Dr. Jean-Pierre Isbouts lecture on the “Amazing city of Singapore”.  I feel thoroughly enriched this evening.


Liz brought my dinner about 8.  There wasn’t much on the menu that excited me; so I went with just the entrée.  I had the ‘combination of lobster’; lobster thermidor & rock lobster tails.  It came with truffled mashed potatoes & steamed broccoli.  I added a side of cauliflower au gratin.  The lobster was again cooked perfectly; the whole meal was delicious. 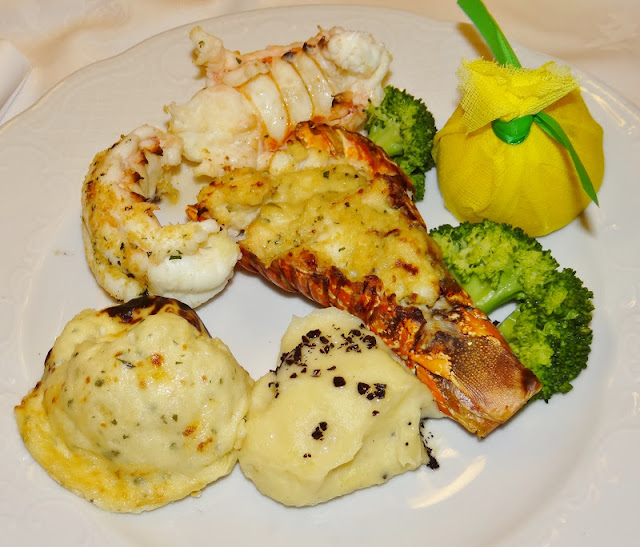 I spent a little more time on the blog; but decided to give it up at 10:30.  Another pretty full day tomorrow; & another country to conquer.

Your pictures are wonderful and capture the beauty of the places you are visiting!

Your photographs were well done...better than anything I can do on my little cannon power shot. The winning photographs were interesting and had a technical feel to them..I thought yours had more natural nature. Overall, all of the photos were nice-I love the picture you post!
01 Cobra/ CC