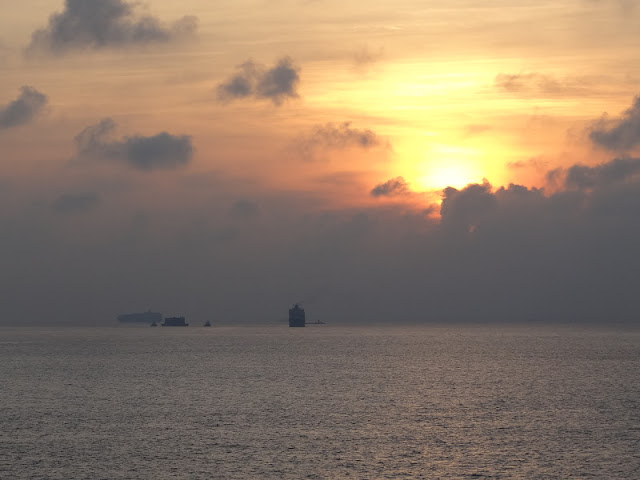 The alarm woke me at 7:15; I was surprised that we were not at the dock.  It was already 82* when I stepped out on the verandah to take photos.  The sun was just coming up from behind some low clouds; & there were freighters at anchor everywhere waiting their turn to come in. 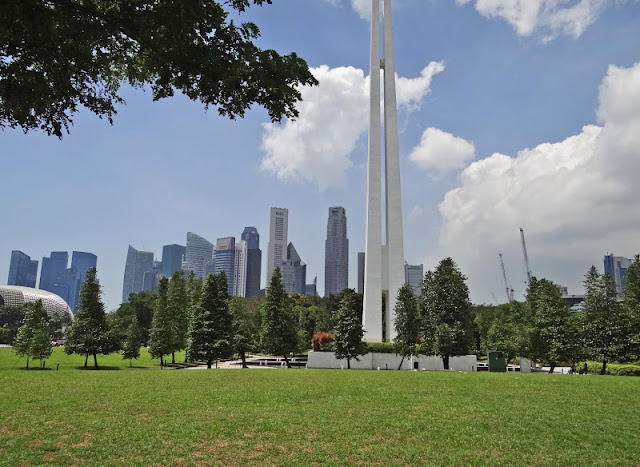 Capt. Glenn announced later that there were some cross currents to work around; & (as is common at the Port of Singapore) a harbor ‘traffic jam’.  The Capt’s thought for the day….”I’d rather be sorry for something I did, instead of something I didn’t do”.  Liz had a lot of room service breakfast orders this morning, so her buddy Oomah brought mine.  The usual granola with strawberry yogurt, toast & grape juice. 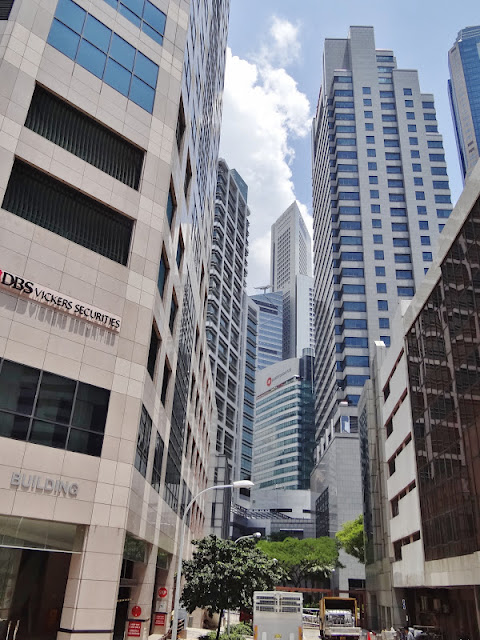 My morning overview tour was called “Spirit of Singapore City” (SGP-AW); & it was to depart at 8:30.  We were so late in arrival & getting clearance, that all morning tour departures left anywhere from 50-60 mins. late.  I was assigned to a shiny, new, ultra plush motor coach (#2).  Our escort for the day was the Protestant minister, Jack Shumaker.  Our driver was named Tek; & we had the most adorable guide on the planet, Carrie.  She was a pintsize dynamo with an uncanny sense of humor.   She was full of ‘one liners’ & some adorable ‘sayings’.  “We have 4 seasons….3 rainy & 1 summer.”  “Be sure to make a ‘happy stop’ before you get back on the coach (potty break)”.  She was showing us how nice the public housing units are; & wanted to point out all the family’s ‘house flags’ (referring to their laundry flying from poles on their balconies).  She was just loads of fun, which somehow helped make the terrible heat a little more tolerable. 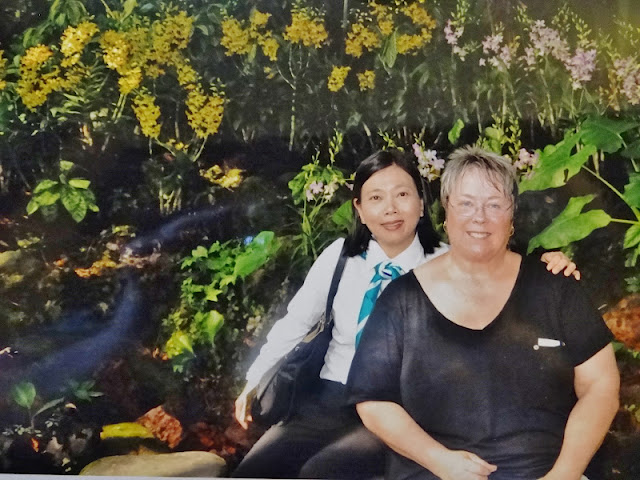 Can you tell how hot it was???
Our first stop was the National Orchid Garden (the largest display of tropical orchids in the world).  WOW!  A photographer’s dream come true.  She explained how some of the varieties came to be; & pointed out orchids that were named after various celebrities.  The garden was divided into sections of differing varieties.  I think we got a peek at just about every different garden. 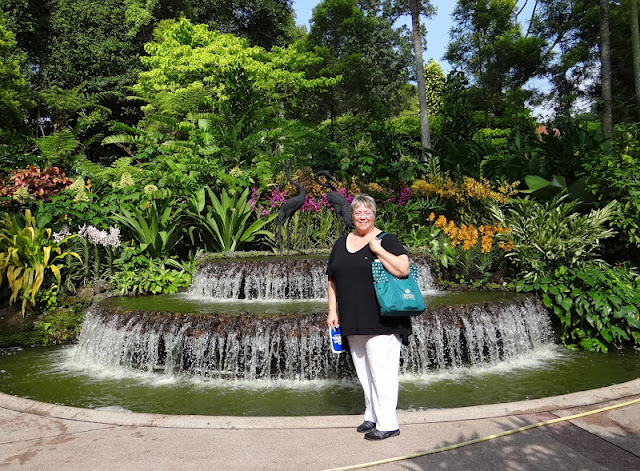 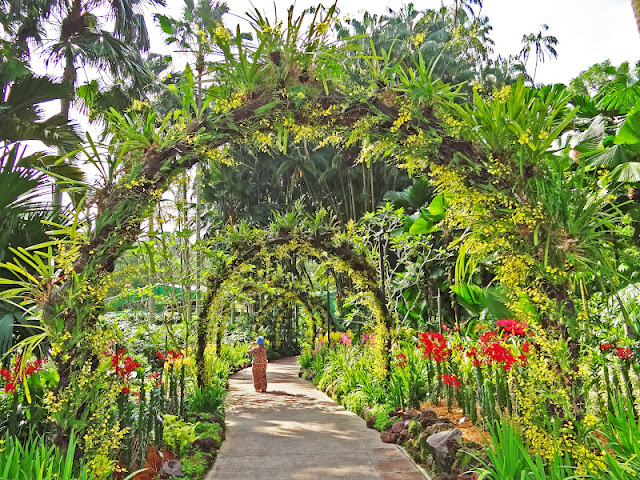 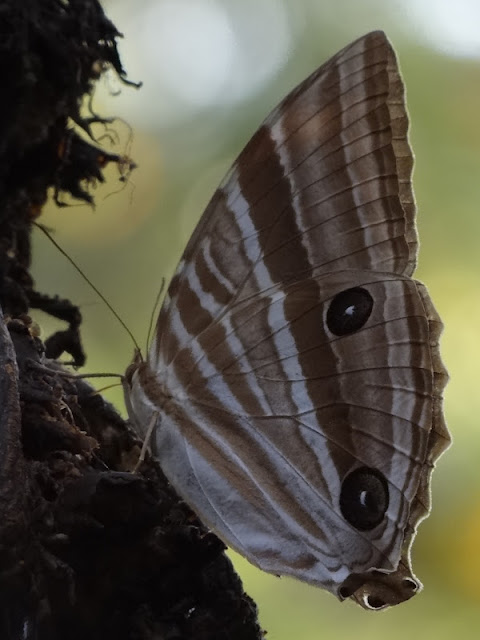 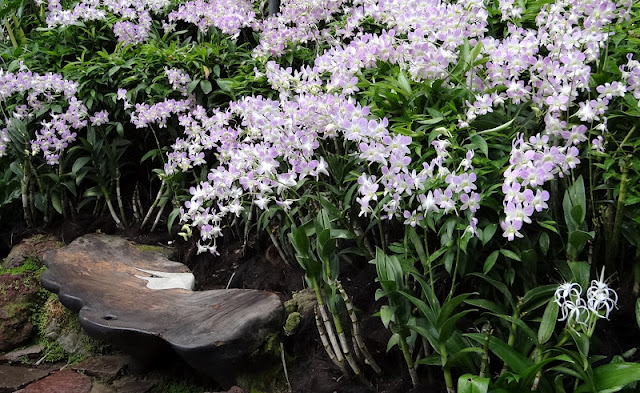 Even though we walked in shaded areas part of the time, it was so humid you felt like you were trying to breath underwater.  And to think this isn’t even the height of their summer!  Some people got all caught up in their shopping; & they were 30 mins. late getting back to the bus. 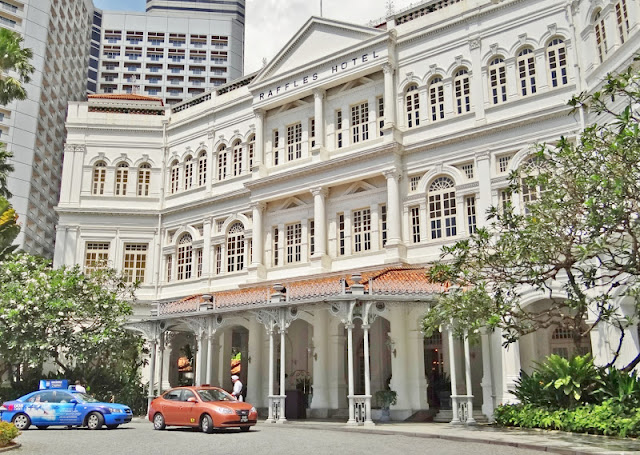 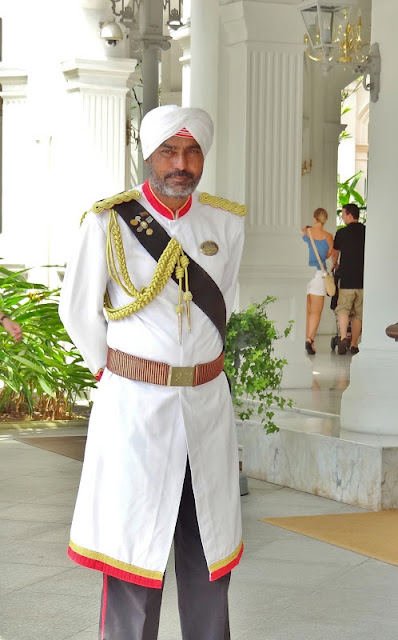 Our next stop was the famous Raffles Hotel (home of the ‘Singapore Sling’).  The hotel complex is fairly large considering they only have 103 rooms.  I doubt that you could call them just ‘hotel’ rooms; they range in price from $500-$4,000 per night.  The atmosphere reeks of old money & sophistication.  The doorman looks like he stepped out of an Arabian Nights movie.  It was a privilege to be able to go into their famous Long Bar (all 40’ ft. of it); but the hotel lobby is off limits.  They are very serious about protecting the privacy of their guests (whom they call ‘residents’).  We were treated to their famous drink; which I admit went down way too smoothly.  The alcohol was very subtle; but you knew it was there.  No doubt the best Singapore Sling I ever tasted.  And it should have been since it would normally cost $28 USD (including their sizable liquor taxes here).  Some people browsed in their ultra-exclusive shops.  I just walked about taking photos. 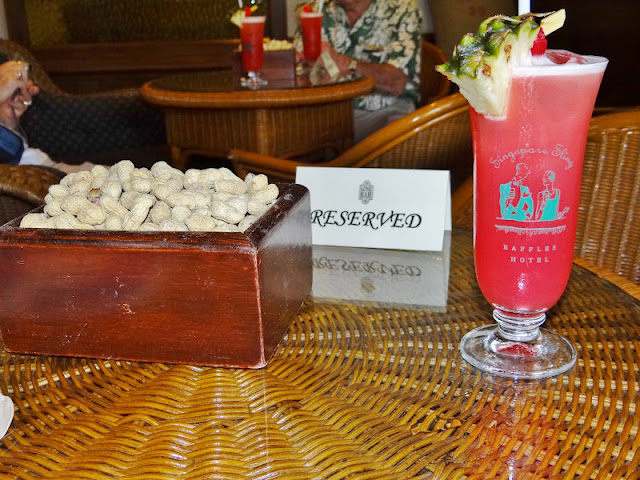 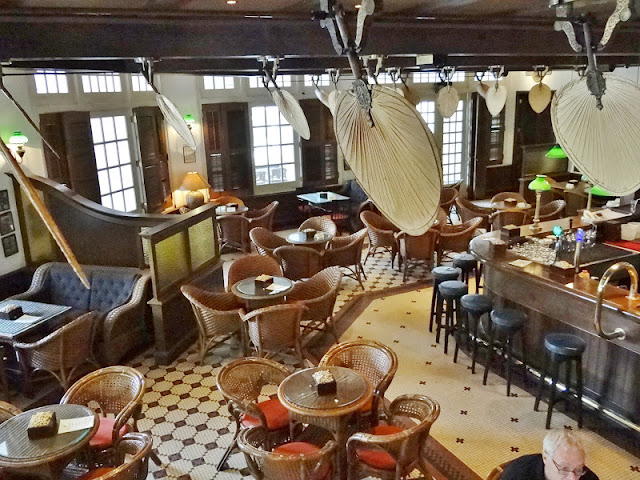 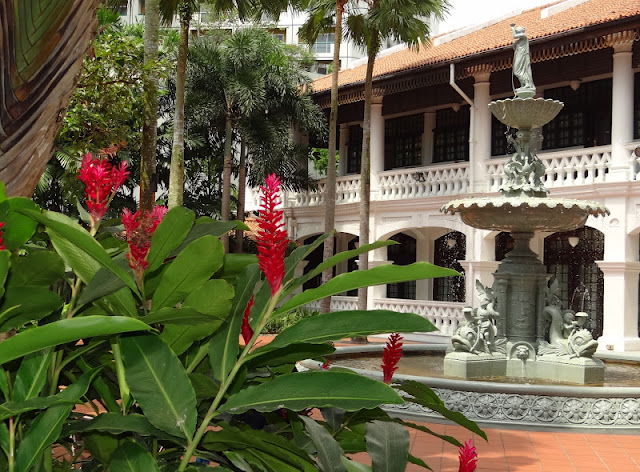 Over 60% of the residents live in public housing.  These well-kept, high rise buildings appear from the outside to be nicer than a lot of tall apartment buildings in major U.S. cities.  These ‘complexes’ have all the amenities (banking, gyms, park like spaces, shopping) that one could possible want near your home.

We did a drive by of some really interesting buildings as we drove through Little India, the Arab District & Chinatown.  Something that really stood out off in the distance was a hotel casino complex. It stands out on the skyline like a 25th century Stonehenge.  And it’s flanked by ultramodern architecture; domed buildings that looked like spiky pineapples & one strange fingered-thing that resembled a lotus blossom.  I’m sure someone will speak up & let me know what they are. 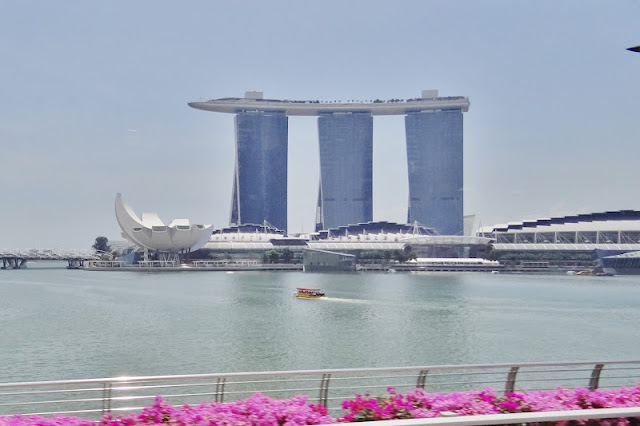 We made a photo stop along South Bridge Rd for a peek at the Sri Mariamman (the oldest Hindu temple).  This structure is mind boggling with thousands of intricate & colorful carvings that depict Hindu life. 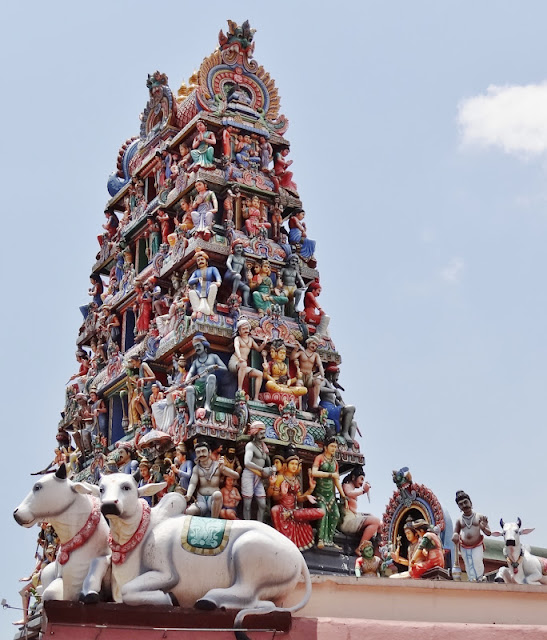 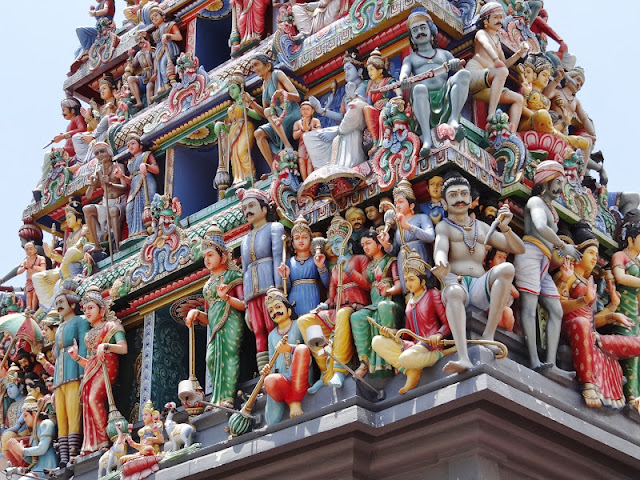 We made another stop a few blocks away to see the Thian Hock Keng Temple.  It seemed so out of place on such a busy street.  Something that beautiful should be tucked away on the lush serene slopes of a mountain.  Reminded me a bit of the Byodo Temple on Oahu.  Every square inch of this temple had me mesmerized. 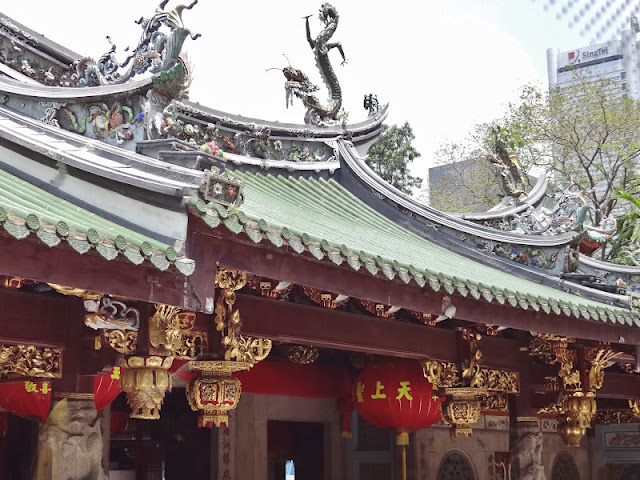 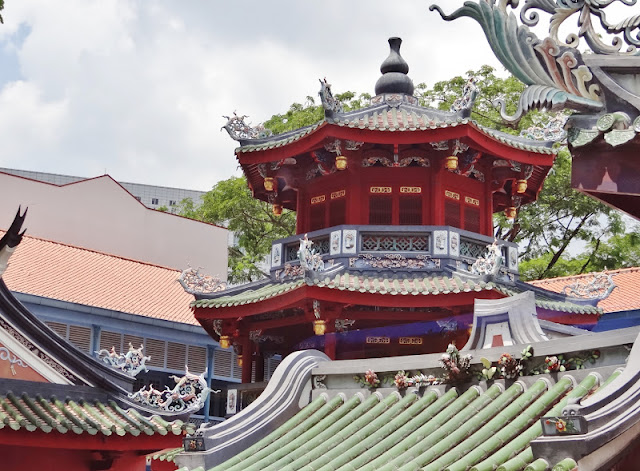 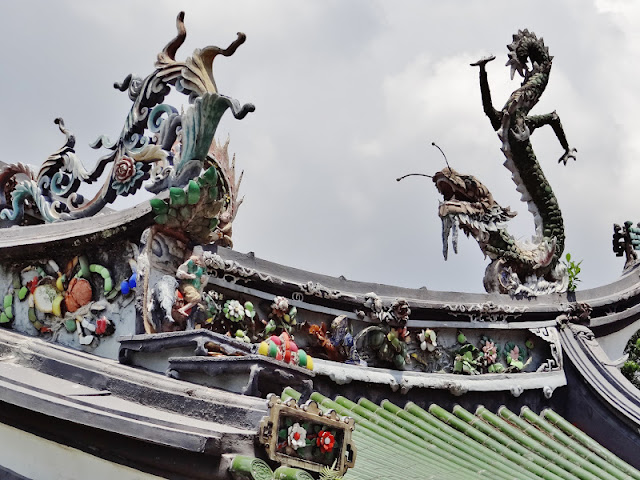 The final stop on this tour was at the Mt. Faber Lookout.   There is a tiny parking lot that leads to a very modern looking building.  You would never know from looking at the outside, the treasures found within.  There is a fancy portico entrance with a waterfall wall; & a hallway with quirky chandeliers that branches off to several high end shops & a restaurant.  You climb a set of stairs with very ornate handrails & lighted cubist panels along the walls that emit this teal green light.  At the top of the stairs is a casual outdoor restaurant & the observation walkway with some nice city views.  This small building’s décor made no sense; it was a mix of a little of everything.  But I LOVED it….the interior of the building was more interesting than the view from up there. 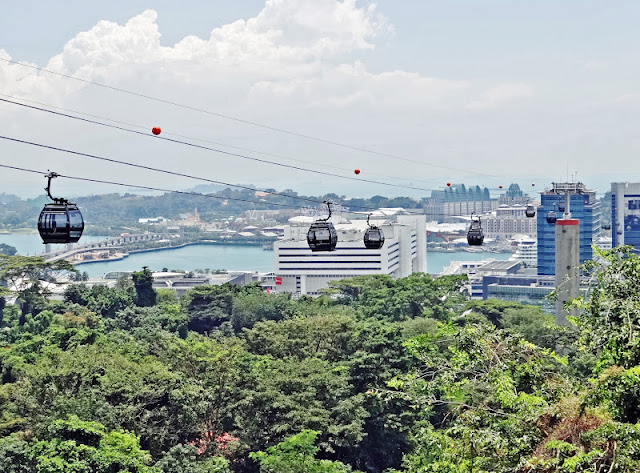 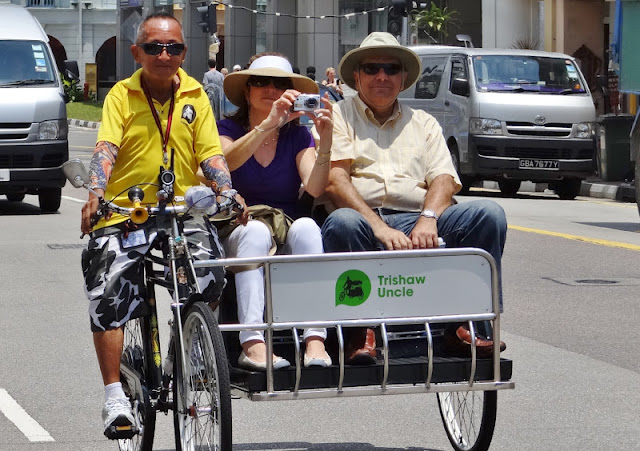 It was kind of hazy; & a good bit of the view was hidden because of tall vegetation or tall buildings.  We could see just the front & the back end of the Serenity.  While standing there, it hit me that Singapore has a little of everything.  There are many religions practiced here; none that make up the majority.  There are futuristic skyscrapers.  Once we got back on the bus, Carrie suggested that we come back during the evening hours so we could ‘feed the mosquitos’. 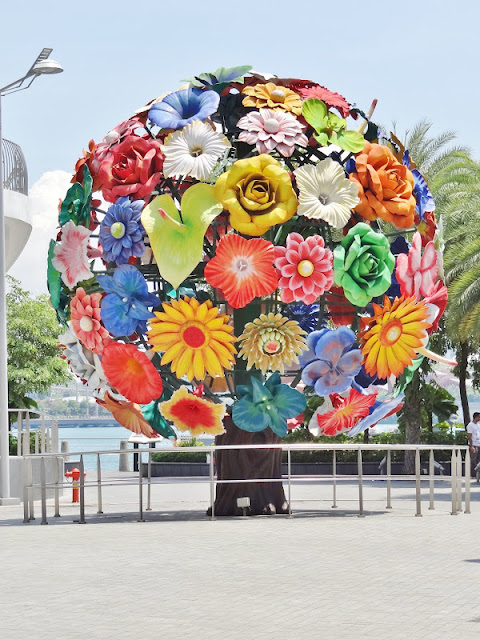 We arrived back at the terminal about 2pm.  When I said goodbye to Carrie, I just had to tell her that I thought she’d make a fabulous ‘best friend’.  Liz was off ship getting ready to do some shopping.  I introduced her to Carrie; & we chatted for quite a while.  When I left on tour this morning, all I remembered was the long series of moving walkways & escalators that it took to reach the ground floor. 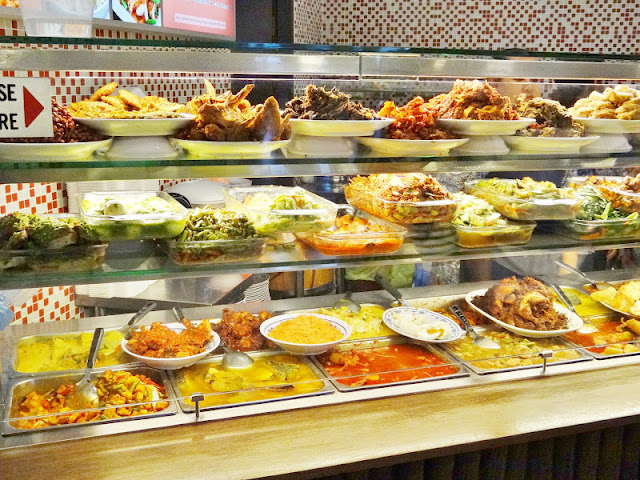 I now realized that it was a huge mall, bustling with people shopping & eating.  Hundreds of people must go through there every hour before they depart on the many ferries going every which way.  The noise level was LOUD; & I detected not one word of English.  The smells emanating from the food court, had me salivating.  Do I dare eat the local food???  It was very tempting; I just walked around tooking photos instead. 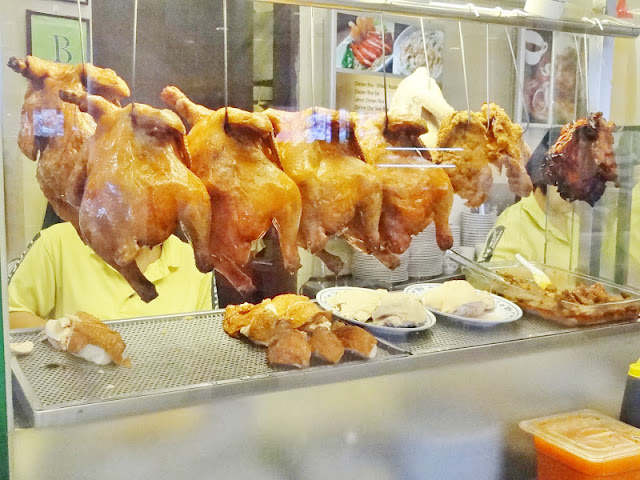 The only place open for lunch at this hour was the Trident Grill.  Andres fixed me a cheeseburger, onion rings & a grilled cheese (which I had later in the afternoon).  Bryan rustled up a Dr. Pepper for me; & I learned that he was signing off tomorrow.  I thought I was keeping up with who’s leaving when; but I’m glad I found this out sooner rather than later.  Fortunately I had some USD so I could thank him for his kind service.


Today’s heat nearly wiped me out.  When I booked my tour for tomorrow, it was supposed to leave in the morning; but it was changed to midafternoon.  I was looking forward to the views from the Singapore Flyer.  But beating the pavement in Little India during the hottest part of the afternoon sounded like a bit too much.  Not wanting to become a statistic; I went down & cancelled the tour.  While I was down there, I took my newly issued key card for this voyage; & had it ‘hole-punched’.  I have a retractable lanyard type device that stays attached to my bag so I can reach (but never lose) my key card.  Back in the cabin, I watched as the dock workers used their fork lifts to bring tons of new 'stores' onboard.  Wonder what goodies they've got in store for us this segment? 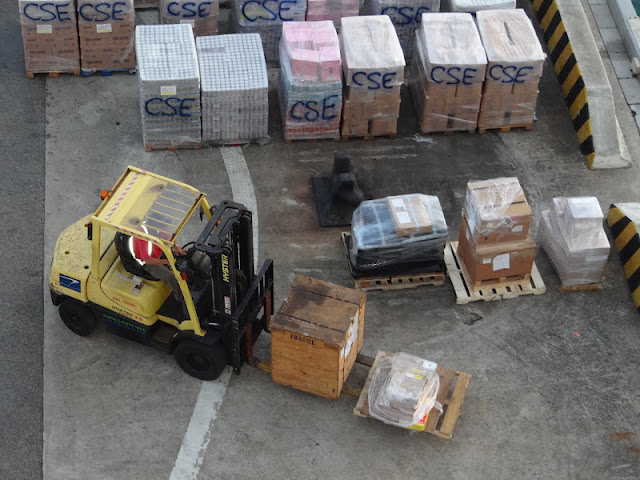 I put my feet up & napped for an hour.  Did some work on the blog & ordered dinner.  I started with an appetizer portion of the fusilli pasta with pancetta, mushrooms, onion, tomatoes, cream & white truffle oil.  Absolutely luscious! 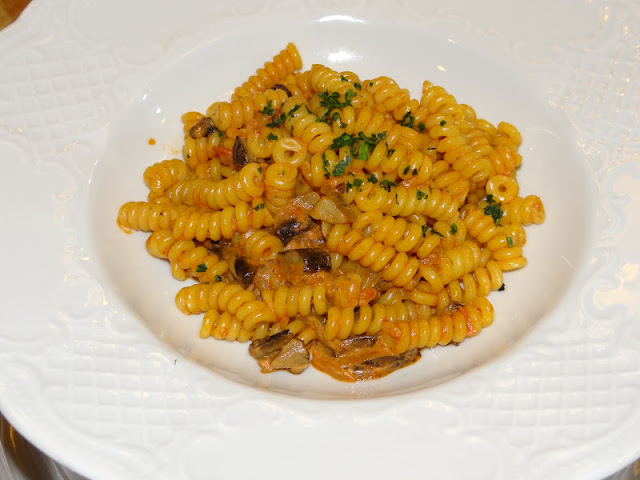 My main course was herb crusted fillet of sable fish with a lemongrass-shellfish sauce, served with saffron potatoes & a stir fry of bok choy & mushrooms.  Whatever sable fish is…..it was outstanding. 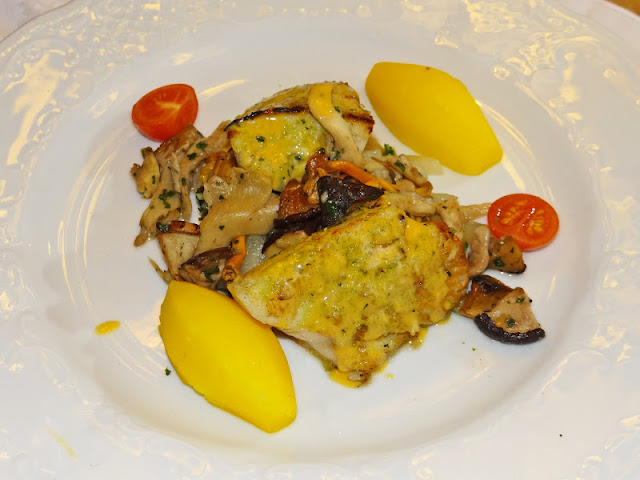 I went out in the hall to say goodbye to Oomah, who’s signing off tomorrow.  I wanted to give her a little something for bringing me breakfast this morning; & she’s been exceptionally friendly to me.  She has the section of cabins right next to Liz’s.  They’re like 2 peas in a pod; helping each other out if they fall behind.  Oomah was a little misty eyed; which got both Liz & I started too.  Saying goodbye is always hard when you know there’s a chance you will never meet again.


I did a little work on the 460 photos I took today; but just couldn’t stay vertical much longer.
Posted by Unknown at 10:47 AM

fabulous descriptions and photos Becky...felt like I was there with you.

Singapore looks like a fascinating city, and your special guide, Carrie, sounds as if she made the tour an exceptional one.

Thanks for the time you spend putting together this bog and your excellent photos. I share your love of travel, and your blog helps pass the time between cruises in the dreary midwest at this time of year.