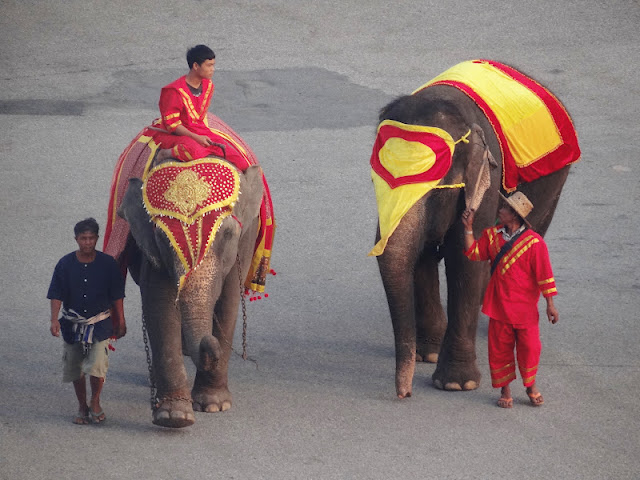 I looked out about 7:30 to find us parallel parked next to the terminal in Laem Chabang.  And almost directly out in the front of the building were 2 huge elephants, draped in red & yellow.  Their handlers were feeding them; & then proceeded to slowly lead them right next to the gangway.  They were obviously the Thai version of the “Welcome Wagon”.   According to the bridge camera info, it was already 86*; & the camera lens fogged up the minute I stepped out on the verandah.  Shortly, Thai music started to reverberate off the side of the building; & there were 2 lovely Thai women dressed in native costume dancing for us. 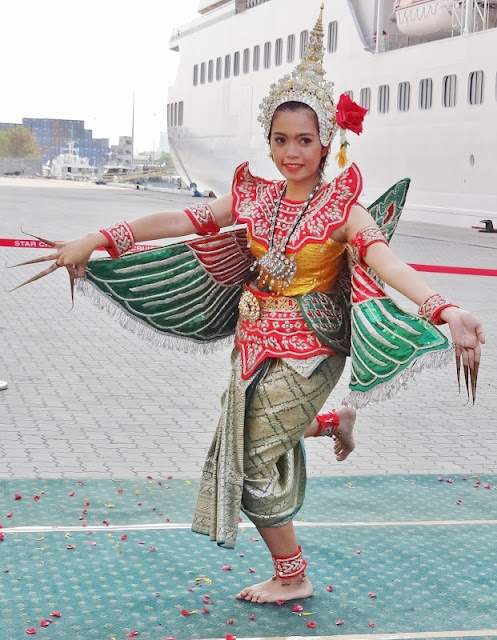 Since I had an early tour, Liz brought my breakfast about 7:45; scrambled eggs, bacon, grape juice.  I quickly checked emails; & found one from my T.A.  Bad news….I will have to eat a $550 penalty for canceling my Hong Kong to San Francisco flight.  Ca-ching!  Even though my mind was pretty well made up to stay on till the end of the world cruise, I was keeping tabs on the losses as they are figure into the total cost of the trip.  It’s all kinda scary.


The Capt. made an announcement that the ship had been cleared by the local authorities.  His thought for the day (an oldie but goodie)….”Blessed is he who expects nothing for he shall never be disappointed”. 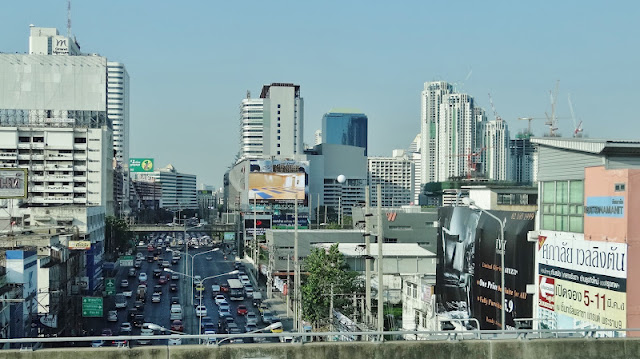 My tour today (LAE-FW) was titled “A Day in Bangkok” (as in how much of Bangkok can you cram into a 10 hour day, when at least 4 of it will be spent getting to & from).  I was assigned bus #10; & had a very good guide whose name was Parr.  The 2+ hour ride into Bangkok provided Parr with plenty of time to cover a lot of historical facts & give an insight into day to day life of the Thai people. 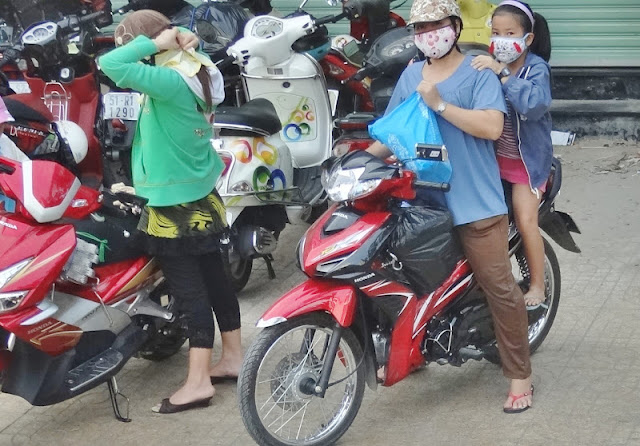 As is the case in a lot of Asian cultures, they protect their skin from the sun as a sign of status.  If you are tan, it means you are poor; a laborer.  No matter how hot, they are wearing long sleeves or leather jackets & sometimes gloves.  The vast majority of those who are riding scooters or bicycles also wear a face mask; partially to protect them from the pollution that is prevalent in the air.  Some masks are plain; but some seem to be fashion coordinated with the clothes they are wearing. 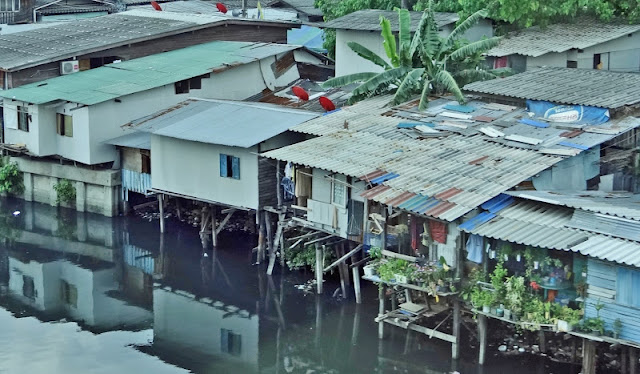 Although times have changed somewhat, Thais were not allowed to practice birth control until such time as they produced 2 sons.  The ideal situation would be to have your son(s) spend their early morning hours learning from the monks before school classes.  Those chosen few would have a greater foundation toward higher education; giving the family a higher status.  There‘s no such thing as a pension.  The elderly continue to work as long as they can, usually helping others tend their gardens.  Most of the gas stations in Bangkok have a KFC & McDonald’s attached to it.  The Thai people equate a night out at KFC & McD’s as special as you might, going to the country club for dinner.

Between Parr’s commentary & the interesting scenery passing by the bus windows, the ride didn’t seem so long.  He explained that the many ‘boxy’ shaped houses with tin roofs that we were seeing were ‘1st generation’ houses…….those built by the grandparents, which now house multi generations of the same family.  We passed many areas where the boxy houses were so close together that their roofs practically touched each other.  From the perspective of this Westerner, this type of living is unfathomable. 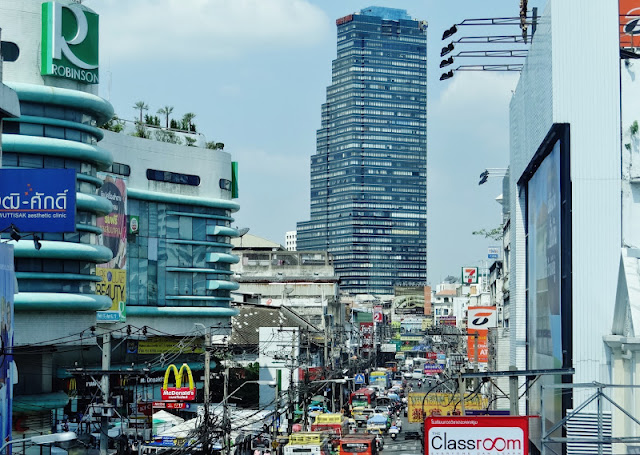 Within a blink of an eye, all you could see were tall, modern skyscrapers for 180*.  Bangkok is certainly a city of contrasts with the mighty Chao Phraya River flowing through the center of it.  Certain sections, such as Chinatown have gone to great lengths to preserve their native feel.  Magnificent temples mixed in amongst contemporary structures.  Half the population seems to be caught in a time warp while the rest of them have moved into the 21st century.  There is no rhyme or reason to the traffic flow.  If traffic isn’t moving fast enough to suit you, just drive your scooter up on the sidewalk & go around everybody (including pedestrians).  I don’t know which fascinated me more….watching the traffic movement or the street venders.  They are such enterprising people.  You have a favorite family recipe?  Pile everything you need to set up a mobile kitchen on your scooter; & pick a sidewalk!  And dare I mentioned power lines?  The same person who strung the power lines in the movie ‘Slumdog Millionaire’, must have done the work in Bangkok too.  A tangled mass of wires hangs heavily from pole to pole.  I just wonder how reliable it could be? 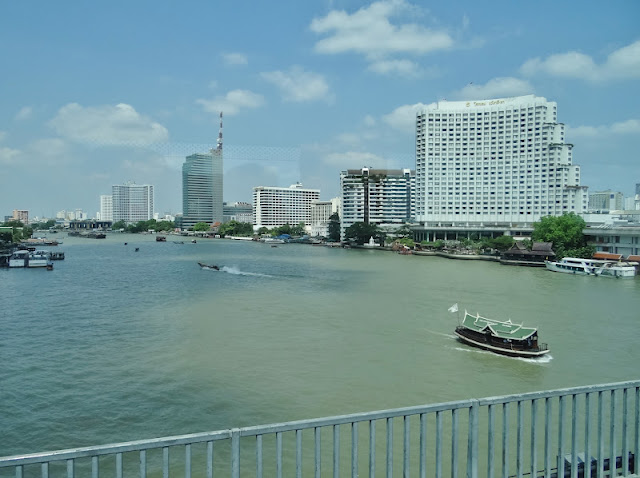 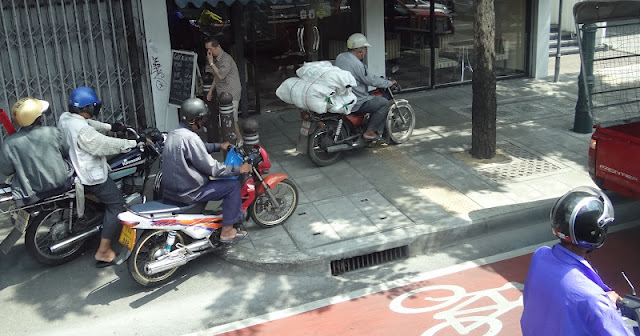 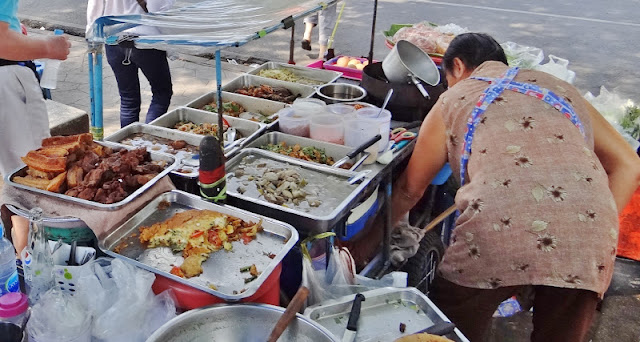 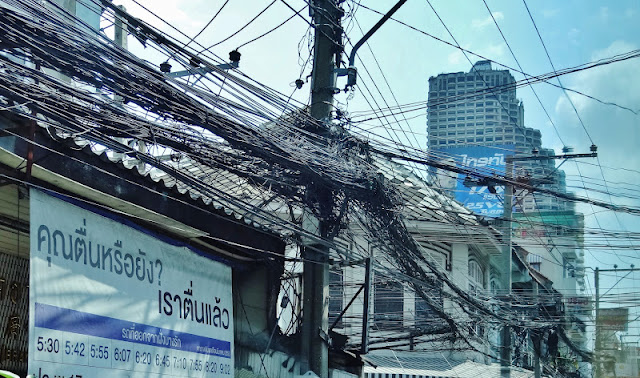 Our first stop of the day was a (very HOT) 1½ hr. walk around the Grand Palace grounds.  This is a photographer’s paradise with the ornate mosaic columns, pagodas & gilded spires.  It would take at least a full day to actually take in all this beauty.  The grounds were quite crowded; & you could easily get lost from your group.  I did several times while I was distracted taking photos.  I shot over 500 today; & as spectacular as they are, they really don’t do it justice.  I’ve since poured over the layout; & still can’t identify each of the buildings & their purpose.  But the photos will speak for themselves.  Even with the crowds of people, there was a sort of reverent quiet.  Not sure why; but I was constantly aware of the sound of wind chimes that hung around the perimeter of a few of the temples. 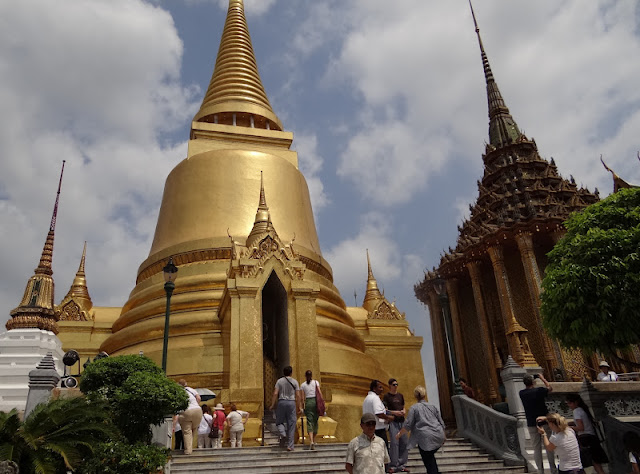 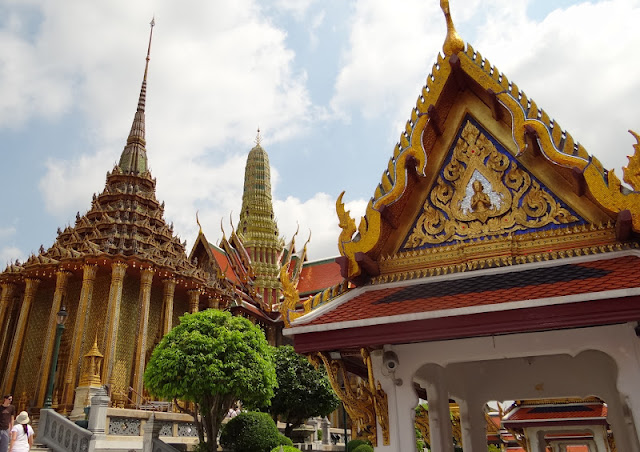 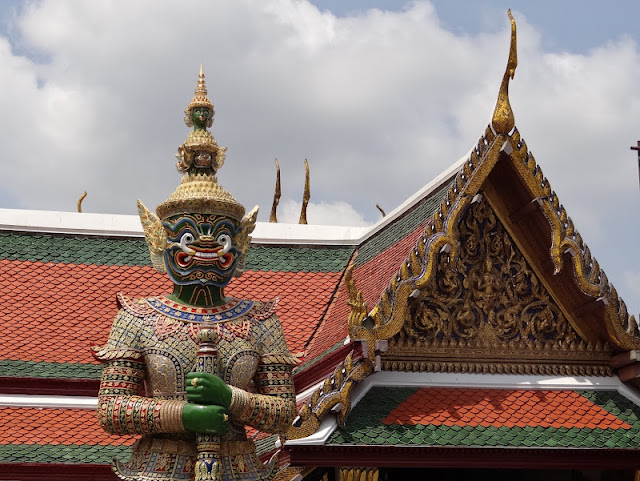 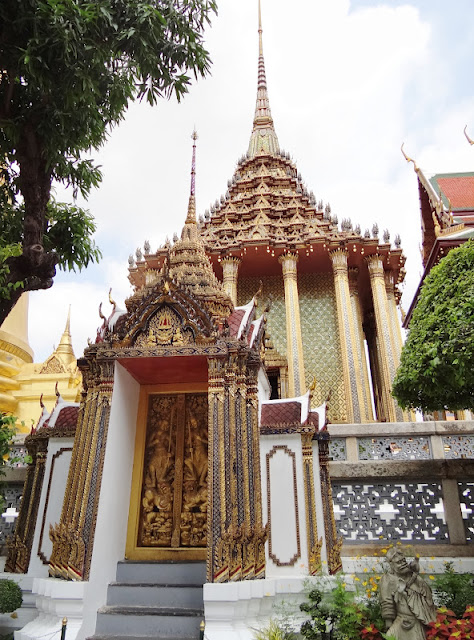 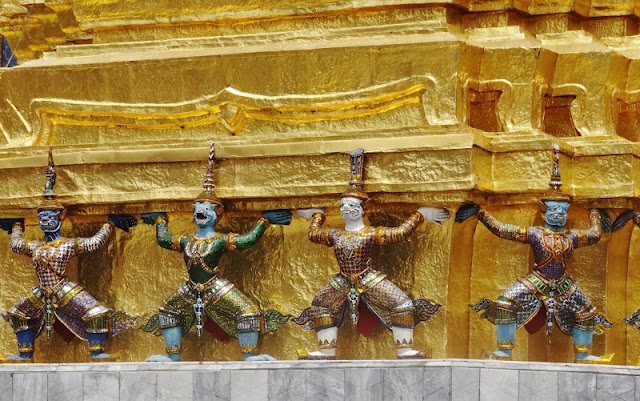 The most revered spot would be the Emerald Buddha in the Royal Monastery.  This Buddha is actually carved from jade; & had been inadvertently ‘lost’ until 1434 when an abbot ‘found’ it covered with plaster.  Part of the plaster had peeled off the nose; & that’s how it was ‘discovered’.  The Emerald Buddha is enshrined on a traditional Thai-style golden throne; & the image is clad in a ‘costume’ that changes 3 times a year.  I saw him in his ‘winter’ attire.  You are not allowed to photograph him from inside; but I was able to get some good shots through the front door. 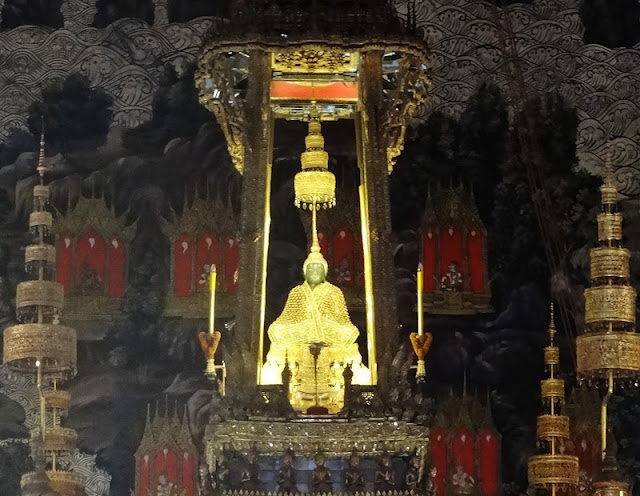 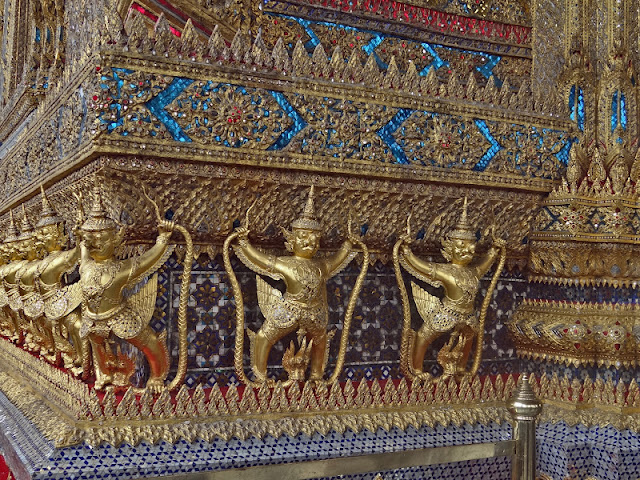 Most of us were sweating profusely, fanning as hard as we could.  Unfortunately, a gentleman in our group went ‘down’ with the loudest thud, his head barely missing the corner of some concrete steps.  One of the guests was a really nice doctor (Arnold) from Murfreesboro, TN; & he stayed with him until the Palace medical team came to assist.  They were giving him fluids; & every time he’d try to sit up, he’d faint again.  It was scary for his wife; & they ended up having to push him back to the bus on a ‘sit-up’ stretcher.


I almost became casualty #2 on the trek back to the bus.  I had to sit; & the guide brought me a soft drink in which she poured some salt.  Nasty stuff; but it kept me vertical at least.  It was at that moment I knew I needed to reassess the tours I’d booked during the rest of the ‘hot weather’ portion of the trip.  Since we were hours away from the ship, that gentleman had to spend the rest of the day lying on the back seat of the bus. 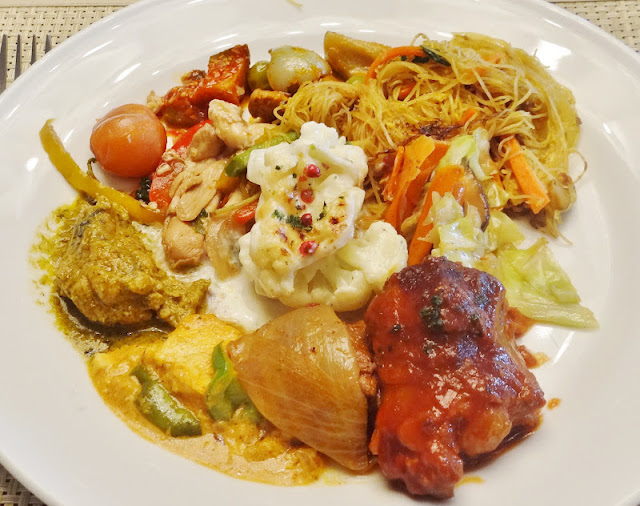 This put us about an hour behind schedule; & we had to speed through our lunch break.  We were taken the beautiful Shangri La Hotel, where we were treated to a fabulous buffet of Thai specialties.  The other bus groups were just finishing their lunch when we arrived.  I sat at a huge table for 12 along with the Doc Arnold & his wife.  He was telling us that he had a hard time clearing his schedule for such a long cruise.  In fact, they flew 36 hrs. & came straight to the ship from the airport.  He must be a gambler cause that’s cutting it close.  I couldn’t identify half of what I was eating; but it was outstanding.  A few dishes were really spicy, the ‘make your nose run’ kinda spicy. 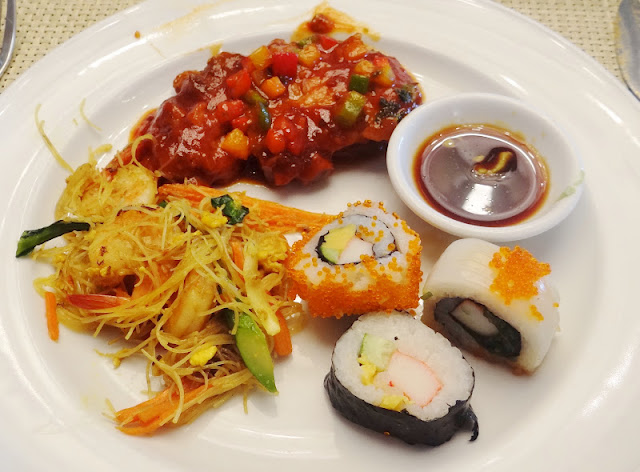 Once back on the bus, our next stop was at the Temple of the Golden Buddha (Wat Trimitr) to view the 5½ ton (18ktg).  This massive 700 yr. old Buddha is 12½’ wide & 15¾’ tall.  Just like the Emerald Buddha, this one was also encased in plaster to conceal it from enemy invaders centuries ago. 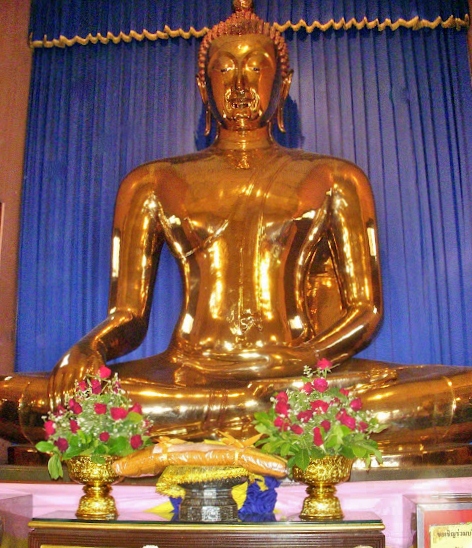 The last stop of the day was for shopping (what else) at a complex that housed gems & silks.  I decided to stay on the bus with the Doc, his wife & the patient.  The majority of my bus mates all came back with shopping bags.  On the drive back, I got another perspective of life for the ‘have nots’.  I observed some folks washing their clothes & their dishes out in the yard.  Yet here we were, a busload of spoiled overfed tourists with shopping bags full of ‘stuff’.  It’s kind of disgusting no matter which way you look at it.

We returned to the ship at 6:40 pm.  I stopped by the Concierge desk to see if there was any news on the Chinese visa (none).  And I did see the Shore Excursion office about cancelling my tour in Cambodia.  Yes, I desperately wanted to see Phnom Penh; but a 12 hr. walking tour in 100* heat is not my idea of fun anymore.  And I didn’t want to take a chance on seeing what the inside of a Cambodian hospital might be like.


After a refreshing shower, Liz brought dinner about 8.  I had a great appetizer, chilled crabmeat tower with papaya & hearts of palm. 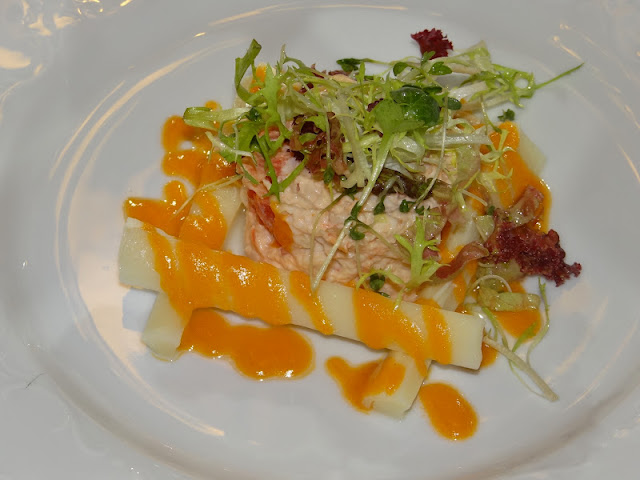 I followed that with a chopped salad with blue cheese dressing.  My entrée was rib eye steak with mushroom-truffled butter, stuffed baked potato, roasted peppers & mushrooms. 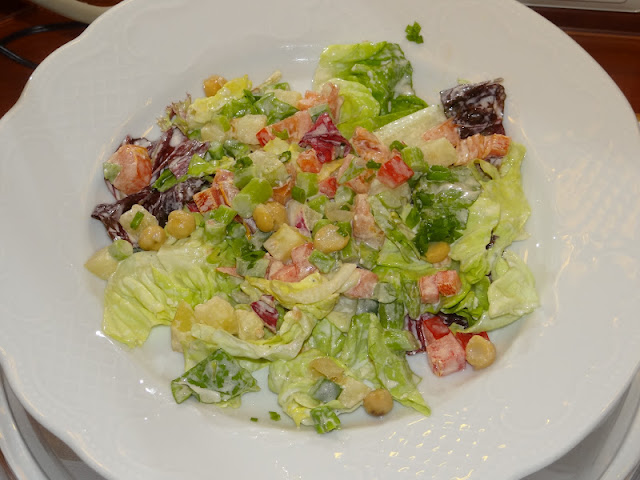 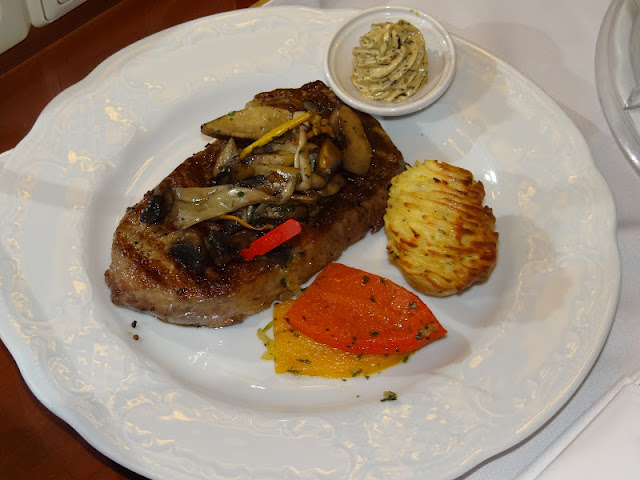 An hour & a half later, I was down for the count; too tired to care if acid reflux got me or not.  Yet, I couldn’t get those women washing clothes in a bucket in a dirt covered yard out of my mind.

Wow, Becky, thanks for the awesome pictures and words about your day in Thailand. I learned alot about the country and its people today. I am so enjoying your wonderful cruise blog, have read every word !!! Happy you decided to continue and complete the full World. Lucky you. Lucky us !!
dm