I slept great; was awake before the alarm went off at 8.  Watched the morning show & was already up in the Bistro before it opened at 9.  It was much quieter in there than it has been; no film crew huddled over in the corner mapping out their day of filming.  I had my capp, fruit, cheese & prosciutto.  Made a stop by the photo gallery on my way to bridge class.  I wanted to tell Christine that the camera was sick again.  She blew some compressed air in between the lens & admitted she didn’t know what else she could do.  She did suggest I ask at the front desk if anyone knew of a camera shop close to the port area in Fremantle.


Capt. Glenn commented this morning that the weather was almost too good to be true.  He is expecting sunny weather straight through the week.  (It’s the part he’s leaving out that concerns me……according to weather.com & weatherunderground, the highs on Thurs. & Fri. in Fremantle are supposed to be 102* & 90* respectively!  How in the hell am I gonna survive walking tours in that???  If this were Bali or Cambodia, I’d expect something like this.)


But for now it’s a crisp 66* sailing the Great Australian Bight.  Capt. Glenn’s thought for the day… ”Appreciation is a wonderful thing.  It makes what is excellent in others, belong to us as well.”


Bridge was bridge, more rules of bidding with an unbalanced hand (that probably means as much to y’all as it does to me at this point).  Since Mr. Kim has moved on to intermediate bridge, it appears that Louise & I are the only two that are still struggling a little.  She says she about to reach her saturation point; & I know I’m not far behind.


After bridge, I went to the front desk to ask about camera shops.  They called the concierge (Alexandra) over; & she got on her computer right away.  It appears that I finally have a situation that only a concierge can help me with.  She found a large, reputable, family-run camera shop not far from the pier in Fremantle; & she offered to call them for me.  Cool!  She handed the phone to me; & I explained my dilemma to a nice lady.  She asked if I could call back in about an hour; ask for Luke & that he would research their inventory to see if they had a camera that would closely match the features that I’m used to on my Sony.  I told Alexandra that I was going to have some lunch; & that I would come back down later.  She was at the end of her shift; but she said Melanie could pick up where she left off.


I made a stop back at the cabin; & Liz told me that the men’s singles shuffleboard competition was taking place in our little private area deck 8 aft.  So, I went out & watched a couple of games.  There were about 20 people watching; the temperature was around 70, no wind.  It felt really nice out there.  In fact, I would have preferred to have stayed out there & read all afternoon.  But they were having the women’s single competition later; so there would be no peace & quiet out there today. 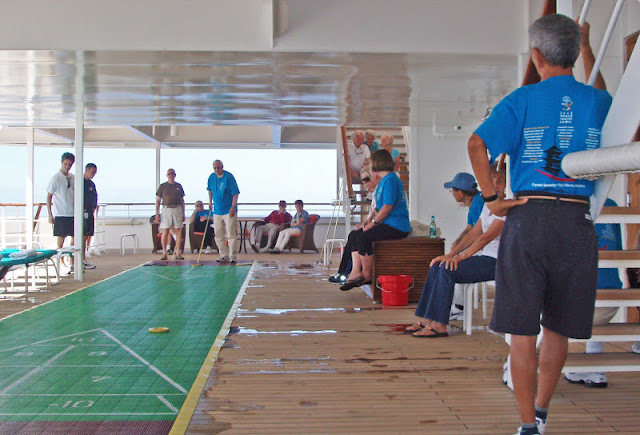 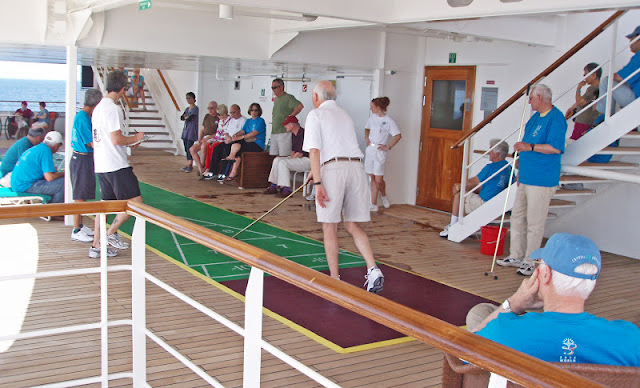 So, I went up to the Lido to ponder spending hundreds of dollars on a new camera; & to have some lunch.  Today was the Asian themed buffet again.  I didn’t bother to shoot any photos with the crappy camera; they wouldn’t look half as good as the ones I took at this same buffet 2 weeks ago.  Just trust me, the food looked exactly as it did before.


And I pretty much had all my favorites, & tried a few new things.  I had the pork belly, spicy orange chicken, Vietnamese pork & prawn salad, shrimp cocktail, hearts of palm, marinated eggplant stir fry.  Today I thought I’d try the spring rolls & the potstickers.  Both were excellent. 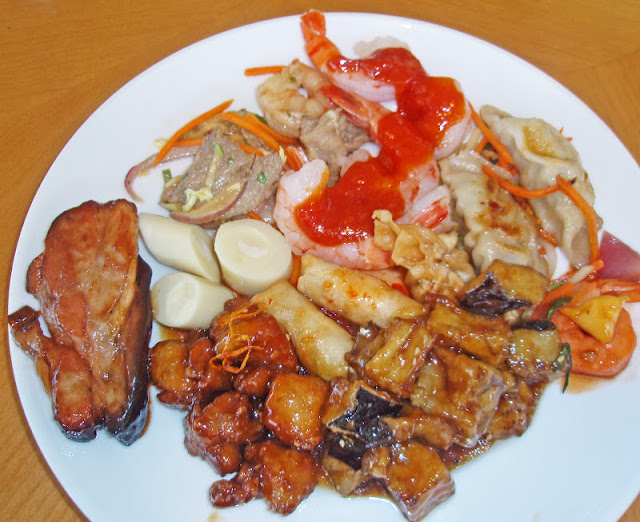 About 2:30 I went back down to meet with Melanie (pronounced ma-LAHN-ne); & got her to place another call for me.  Luke spent about 20 minutes going over 3 cameras that he thought would satisfy my needs.  I wrote down all the specs; & got online later to take a closer look at all 3.  Luke advised that I wouldn’t find anyone who could repair my camera on such short notice.  It would be at least week before they could even put it ‘on the bench’.  So, I know what I’ll be doing after my morning tour on Thurs.  Goodness, a 20 min. satellite call………I do hope I don’t have to pay for that too???


After spending over an hour online researching the cameras, I was in no mood to do any photo editing.  So, I laid down with the Kindle; & yes, fell asleep for about an hour.  I ordered dinner; & wrote some emails & checked facebook until Liz came about 8.  She said she was competing in the table tennis tournament tonight (the crew also has their own set of Olympic games that run concurrently with the passengers’).  So, she was taking off a little early this evening. 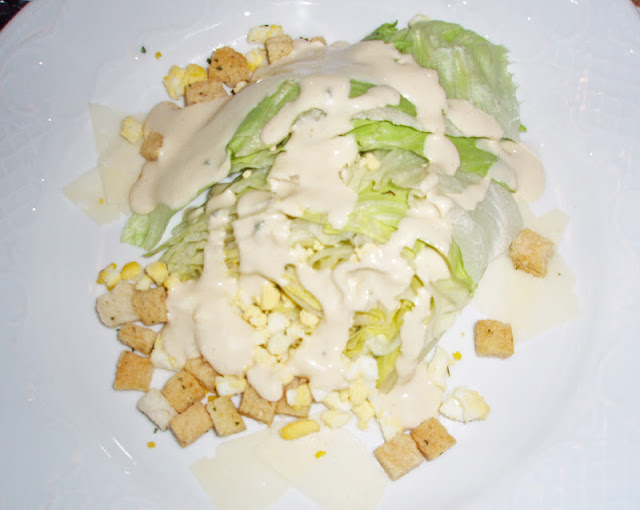 My main course was spaghetti carbonara……..I LOVE carbonara sauce.  And Crystal uses pancetta instead of plain ham; & does not add green peas.  It was divine. 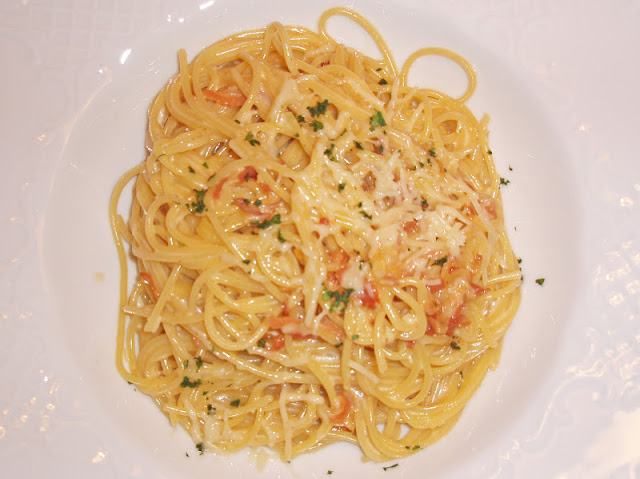 For dessert I had something called “French Influence” (I have no idea why).  It was pear caramel cake with Poire Williams Sabayon (whatever that is….it was creamy & frothy & tasted of vanilla-caramel).  It came with vanilla ice cream.  I did eat the ice cream first; but will save the cake part for breakfast in the morning. 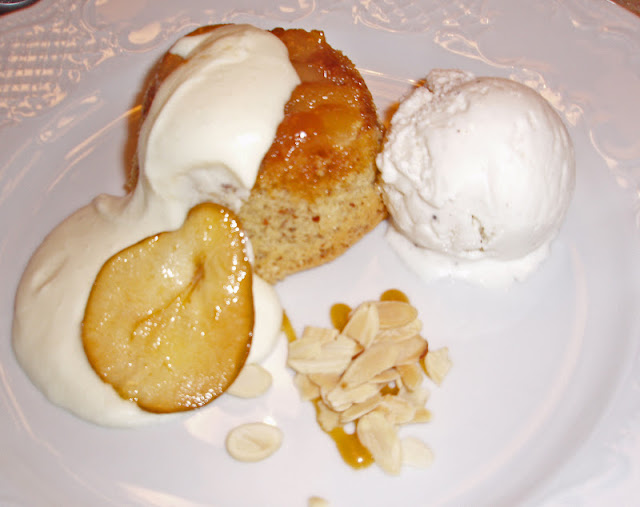 It is now nearly 2 am.  Thank God tonight we get to run the clocks back one full hour.  At the rate we’re going, I may almost recoup that whole 24 hours I lost crossing the international date line a few weeks ago.  Well, not quite.

We recently purchased a Sony Cybershot DSC HX9V with 16.2 megapixels and 16xOptical zoom. Also GPS built in. Love it!

Please give our best to K and A.M.