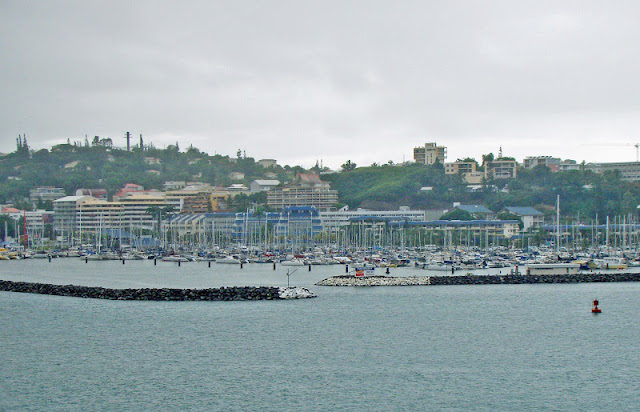 I was awake about 6:15.  After 7 days at sea, you can't help but feel excitement & a sense of wonder about touching land again.  My first look outside was not very promising.  There were dark grey clouds & rain blowing sideways.  Not a great first impression of the island of New Caledonia.  Being ever so hopeful, I got back in bed & read for about hour; hoping that the next time I peeked, there would be a glorious sunrise.  Nope, not today. 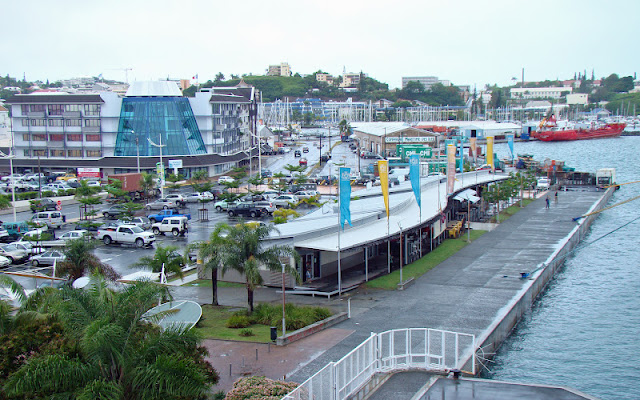 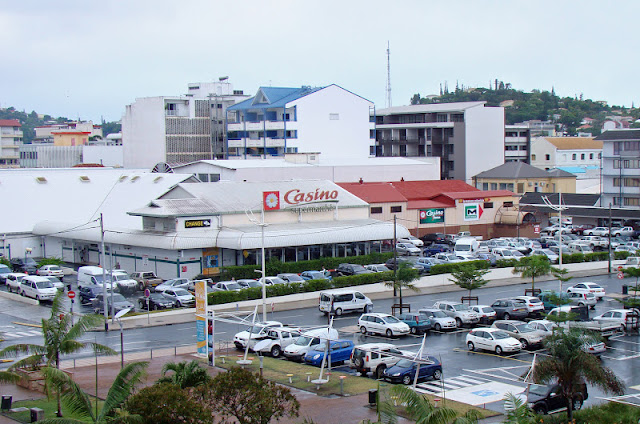 I was already dressed when Liz brought breakfast at 7:30 (muesli & fruit).  I learned that it stopped raining long enough for a local band to set up & start playing on the pier.  But by the time I got out & to the port side, the rain had driven them back in again.  And that's pretty much the way I was supposed to remember my time in Noumea.


Capt. Glenn didn't have anything encouraging to say about the weather when he came on at 8:10 to tell us that ship had been cleared; & we could go ashore.  His quote of the day was an oldie but goodie....."Growing old is mandatory.  Growing up is optional."


We assembled in the Stardust Lounge so our tour (Panoramic Noumea) could disembark together.  During the 20 minute waiting period, tours were starting to be cancelled due to the inclement weather.  First to go was the helicopter tour (no surprise there).  Next down was the zip line tour.  There was a 77 year old gentleman who was doing this excursion just so he could report back to his grandson's class.  You could see the disappointment on his face.  A few people I knew were on the zodiac boat tour, which was supposed to go 'rain or shine'.  Sure enough they canceled that one too.  Even the snorkeling tour was canceled.   Why you ask (they're going to get wet anyway)?  They expected poor visibility. All the while I was hoping they would cancel mine.  After all, my visibility was going to be greatly impaired too. 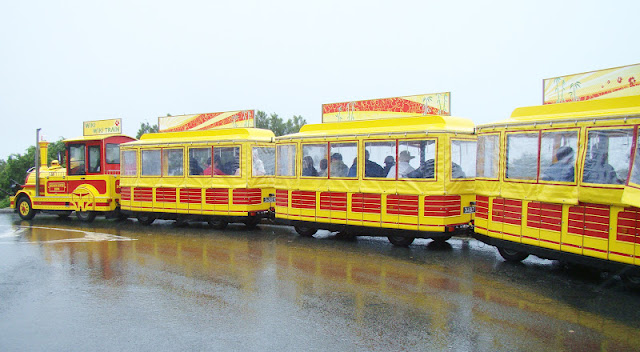 This 2 hours tour was to be aboard a 'mini-train' (trolley-type, wheeled vehicle that drove on the streets) & would provide an overview of the city of Noumea.  We were also to climb in altitude to several lookout points so we could see the harbor & the reefs beyond.  With a rain poncho & umbrella for protection, we boarded the little train just outside the terminal building.  The benches were of hard molded plastic; the kind that even a padded butt was going to find uncomfortable for 2 hours.  To prevent the rain from blowing in, they had the sides zipped down.  But it was so humid, we had to unzip just to get some air flowing.   I found myself trying to roll up the flap & hold it up with my left hand so we could see or shoot photos.  Within 20 mins. the rain had run down my arm; & I was soaked down to my skivvies.  For more than half of the tour, the guide's microphone was so loud that it sounded muffled & was grating on everyone's nerves.  We were in the last 'car' & couldn't get word up to the front until we made a refreshment stop about 2/3 of the way through. 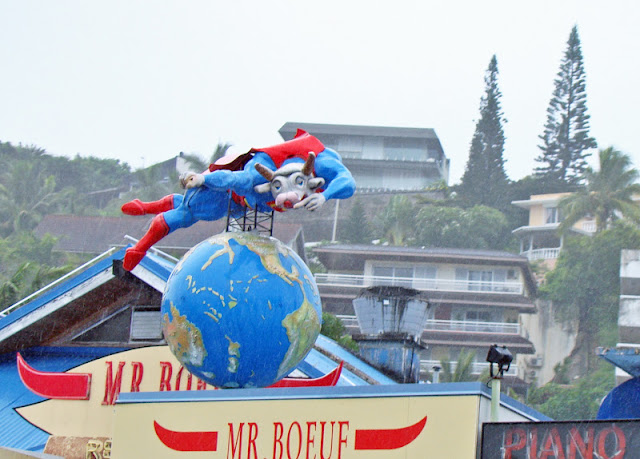 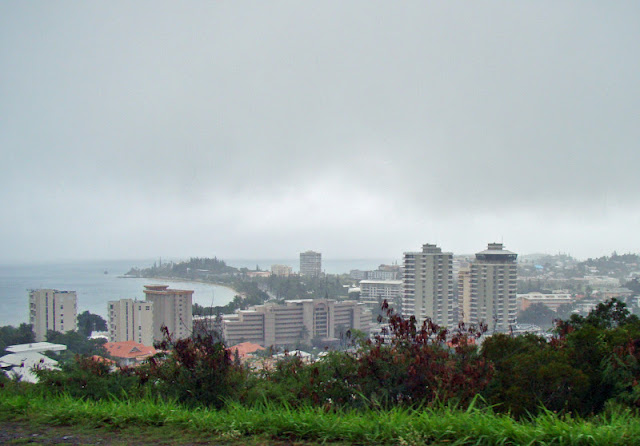 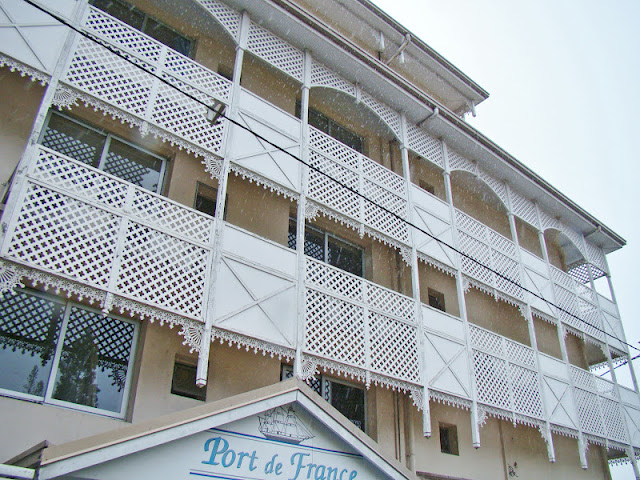 Well, anyway, a word about Noumea.  I really knew nothing about the importance of this French island (although English is the common language).  Its beginnings were as a penal colony; but great sources of nickel have been uncovered here.  During World War II, this served as the South Pacific Headquarters for the U.S. Military.  Our guide stated that she feels quite strongly that the U.S. presence prevented New Caledonia from falling to the Japanese.  There are military barracks, cannons & monuments scattered through the island. 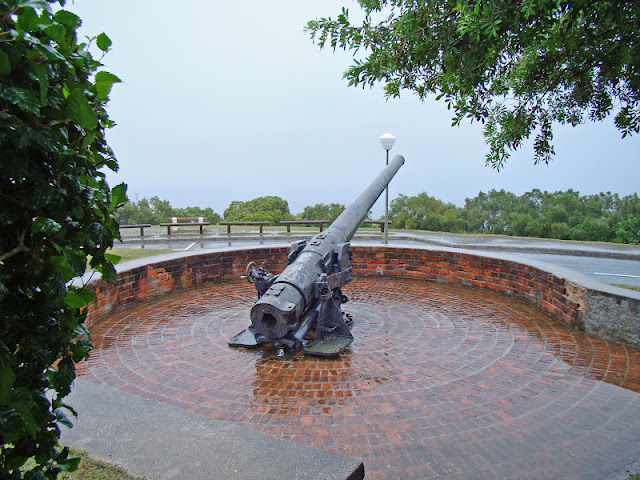 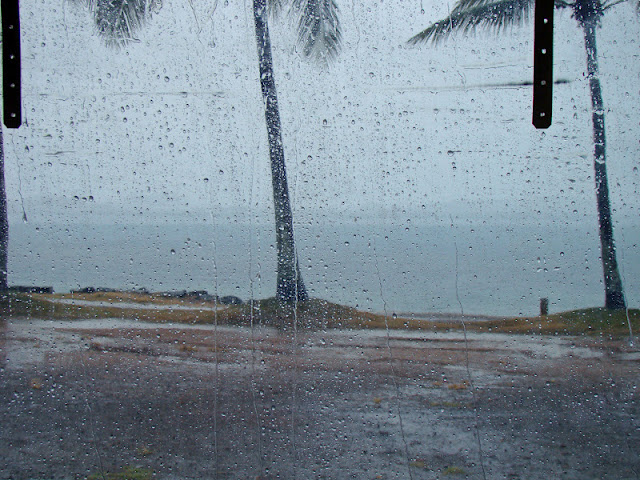 We were driven past what must have been some lovely beaches, tons of yachts & sailboats anchored in various bays.  The locals, who strolled leisurely in the pouring rain going about their daily business, all seemed to smile & wave at the train.  The guide told us, we should wave back.  We were taken to 3 scenic outlook points where we saw (well) not much.  Most of us got off at the first one, about half at the 2nd, & only a handful at the 3rd.  Off shore is a nearly 1,000 mile long barrier reef (2nd largest in the world).  They say that on a sunny day, the shades of blue in the water are breathtaking.  The train made a stop at Coconut Square downtown for those who wanted to get off & do some shopping.  A few did; the rest of us rode directly back to the ship (about 11:15).  As I said, it was a longggg 2 hrs.

Too early to eat, so I stuck my head in the laundry room; saw that it was empty.  Perfect time to throw in 2 loads.  I got out of my wet clothes, grabbed my Kindle & settled in for 1 1/2 hrs.  Even though it was very humid outside, I got a little chilled; & the heat from the dryers felt really good.  After I put everything away, I went up to the Lido before it closed.  Nothing on the buffet really excited me.  I fixed a salad; my daily dose of hearts of palm & 2 cute little appetizers (swiss cheese wrapped with air dried beef & a cute little cornucopia of mortadella stuffed with garlic & herb cheese). 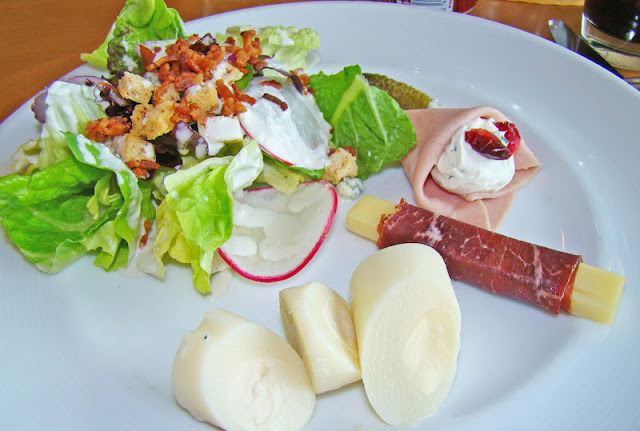 About 2 pm, we saw a moment of sunlight which managed to get through this one little tiny spot of blue sky.  But within minutes, it was raining again.  Logical thing to do was lounge & do some more reading.  I don't have much time to read at home; so it's a big part of my cruising ritual.  And I've loved the luxury of all these sea days to get back into it.  And as sometimes happens, reading segues into nap time.  I woke up just before we set sail; & the sun was now out in all its glory.  It's all about timing. 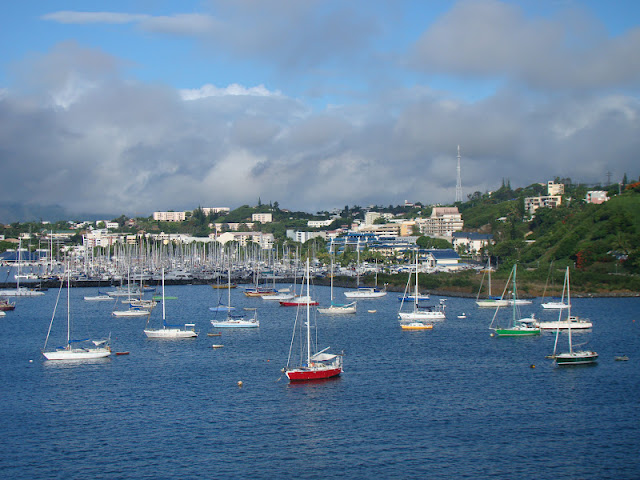 I grabbed the camera; went out on the aft deck; & began snapping photos of the beauty surrounding me.  What a difference from this morning.  I can only imagine how spectacular the view would be from those scenic lookouts now.  What I'll remember most about Noumea....the rain.  But at least my last memory will be the beauty that was there all along. 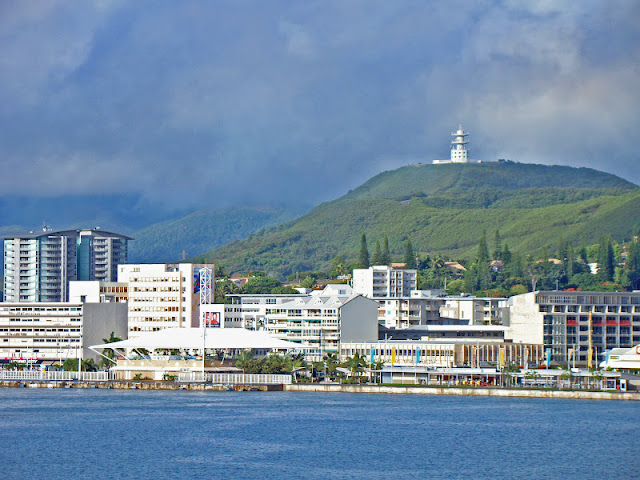 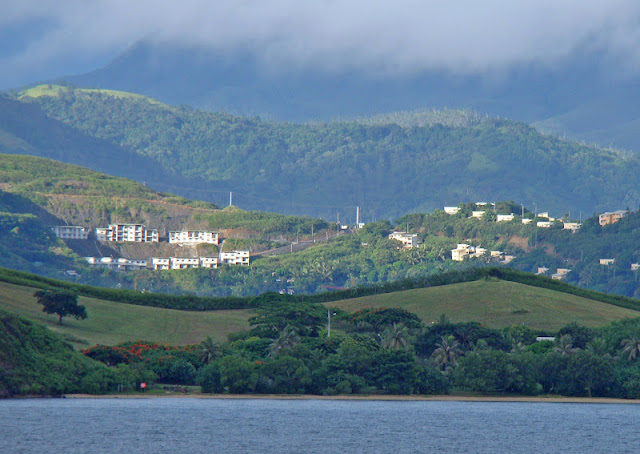 I gave a few minutes thought to going up to Taste's for dinner & trying out the new dim sum.  But tonight's D.R. menu had some appeal to me; so dinner at home won out once again.  I realize some of you wonder if I'm cheating myself in some way by dining en suite most of the time.  True, a good part of the cruising experience comes from the camaraderie with your dining companions.  It's been impossible to hide the fact that I have been sick; & by late afternoon, I'm literally worn out.  Even if I felt like putting on a smiley face, no one would enjoy a dinner interrupted by violent fits of coughing. 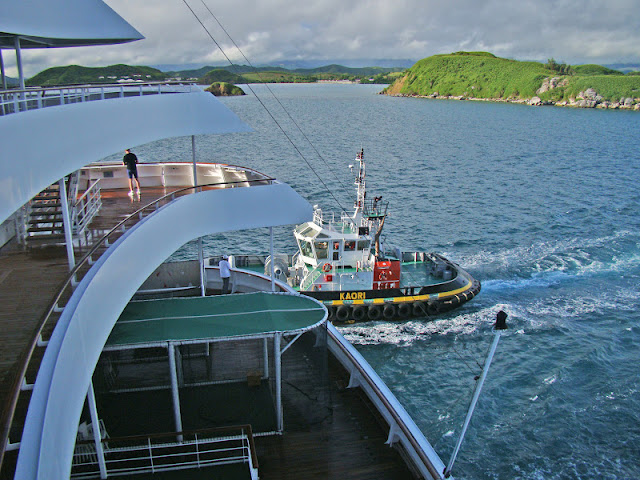 I've gotten to know some fabulous people during my daytime outings.  Most of which are kind enough to ask day after day.....'are you feeling better'?  I keep thinking that tomorrow will be the day that I will feel miraculously better.  Until that day comes, I'm keeping a low profile. 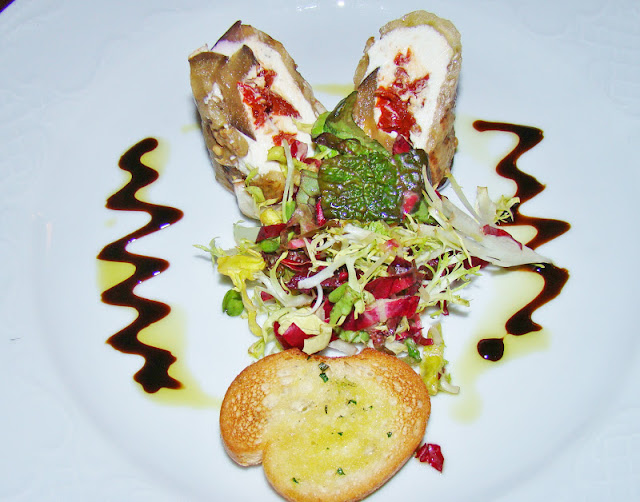 So, back to dinner...as you probably guessed by now, I'm a sucker for 'cute' appetizers.  Sometimes they look better than they taste; but usually I'm happy with my choices.  Tonight's selection was new to me; & I was not disappointed.  Eggplant roulade stuffed with sun dried tomatoes & pepper boursin cheese; served with garlic crostini on an itsy bitsy bed of baby greens.  As tasty as it was beautifully presented. 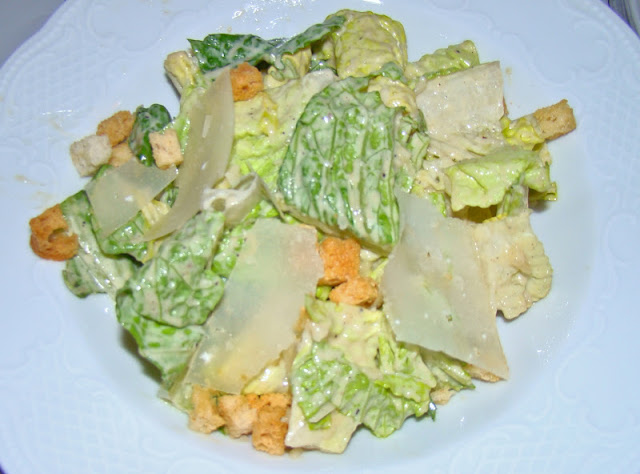 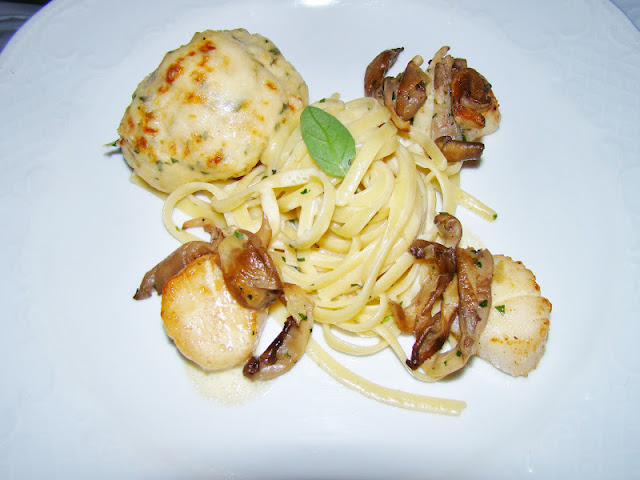 For my main course, I chose the pan seared sea scallops that came with a small portion of basil linguine with oyster mushrooms.  I substituted gratinated cauliflower for the yellow squash.  It was delicious; with the scallops ever so tender & sweet.  The sun was starting to set, so I ate my entree out on the verandah.  So romantic...... 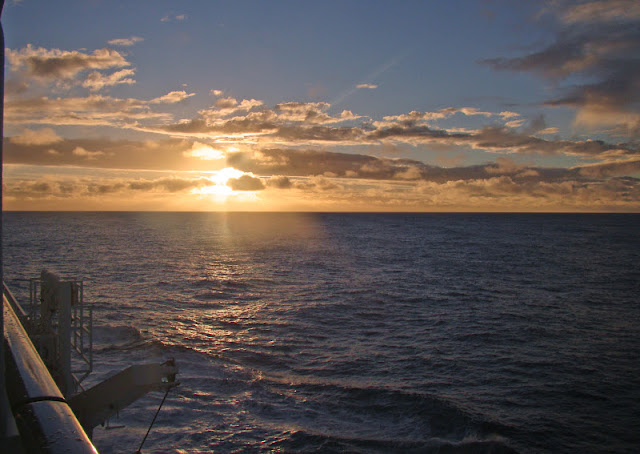 I wanted to get the blog up; but I was still trying to clean up today's photos.  Not a lot you can do about raindrops & fogging lenses.  I laid on the bed, intending to get right back to it.  Capt. Glenn had promised some nice wave action tonight.  And that's the last thing I remember. 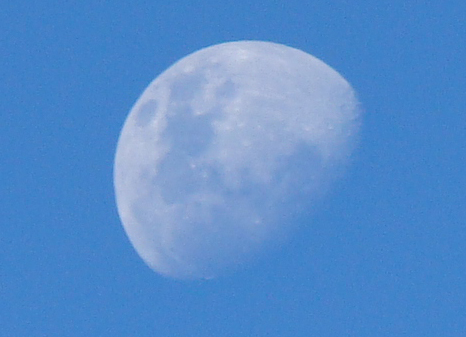