I didn’t get to sleep until after 3 am.  I think I was just TOO tired.  Yes, and the long nap didn't help either.  But it felt really good to be able to lounge around in the bed until I was actually ready to put one foot in front of the other again.  I went to the Bistro about 9:30.  You can tell that new food provisions came onboard yesterday.  The fruit looks different.  The strawberries are huge & not quite as sweet as those we got in Sydney.  The watermelon looks ‘young’. 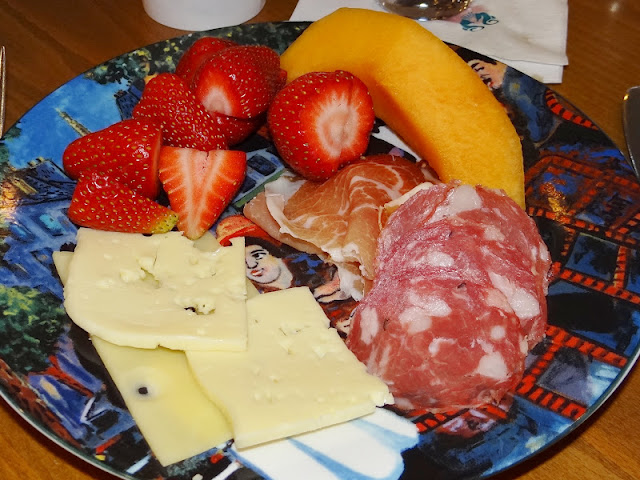 It’s so depressing watching those who are disembarking pulling their carryon bags with a look of dread on their faces.  Why would anyone want to leave THIS; & sit on a plane for 24-36 hours to go ANYWHERE?  I’m grateful that it’s not me; but my turn is coming…..

Celeste & Bill came & sat with me; & shortly Che joined us.  I told them how much I was dreading getting off after this segment; & Celeste said (with her little devilish grin), “you should just stay”.  I can easily be influenced; but undoing my travel plans would be a nightmare.  Besides, that I don’t have a Chinese Visa.  She said I should check into it.  (Uh, oh…..)  Celeste asked if I wanted to go out & about with them; they had no set agenda.  But I declined; so much to do today.  Dirty laundry has reached a critical level; & I’m way behind on the blog.


Well, as I said I can be easily influenced.  I made a beeline down to see Paula Jean (the onboard booking consultant).  She told me that she can only help with FUTURE cruises; & that I should talk to the Concierge.  Poor Melanie; she’s probably regretting that Becky has learned the value of having a concierge to troubleshoot for you.  I explained my dilemma to her; & she consulted the Clearance Officer.  They said it was possible to make application once we reach Hong Kong.  But that’s the day I’m supposed to fly home.  Oh dear, what if I cancel my flight; & then CAN’T get a visa?  Why did I open this can of worms???


The laundry room on deck 8 was pretty quiet.  I did 3 loads; & a little touch up ironing.  About 3pm, I went up to the Trident & had a burger & onion rings.  I saw several new, but familiar deck steward faces who must have signed on yesterday.  It had started raining; & I could hear some thunder.  (I’m now thankful that I did cancel this afternoon’s tour.  There would no view from atop the Singapore Flyer; & I don’t think a trishaw ride in the rain would have made me very happy either.)  That was all it took to put me into ‘nap mode’.  Next thing I hear is the Capt.’s voice booming over the PA system, it’s time for lifeboat drill.  Now I did skip it in Sydney; but I was told that EVERYBODY is now supposed to go at the start of EVERY segment.  I did so; but sat there yawning through the whole thing.  I just couldn’t wake up. 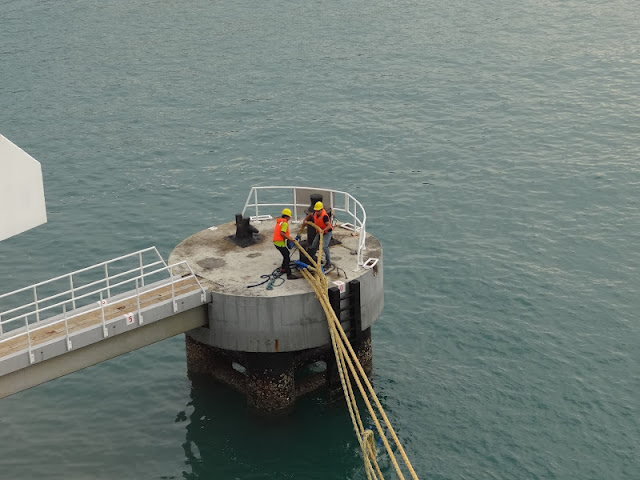 I went out on deck 8 aft to watch sailaway.  It had turned very grey; & we left maybe 40 minutes late.  While I was standing there, I noticed a group of 7 Security Officers huddled together in a meeting on deck 7 aft.  I learned later that extra security people have been brought on for precautionary measures.  And it has become evident that several of them are on lookout & walking the perimeter of deck 7, 24/7.  Comforting to know. 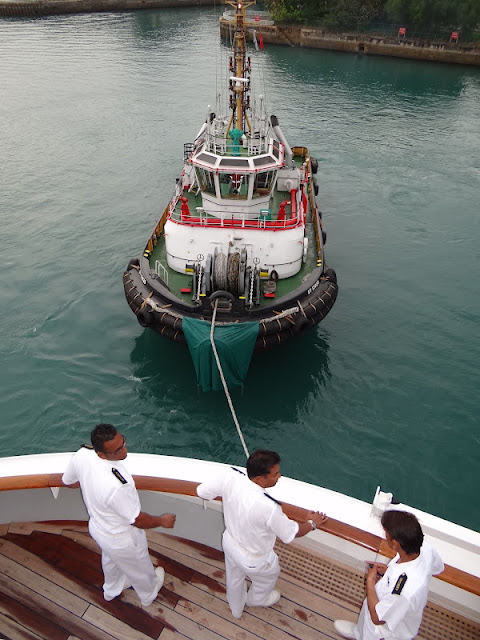 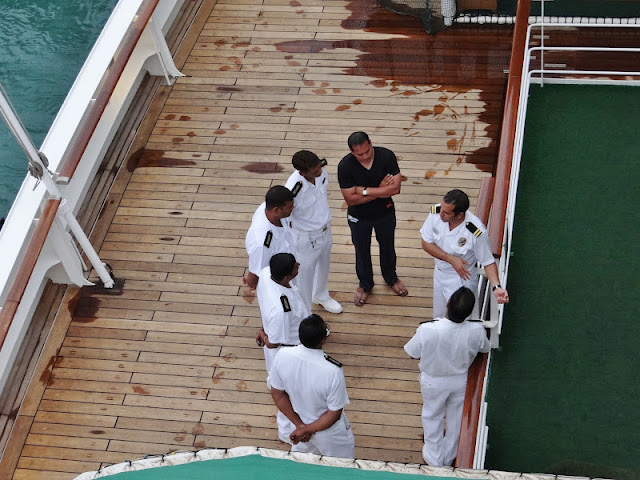 I came in & got a little work done.  Liz delivered dinner about 9.  I asked for an appetizer portion of the salad entrée, which was pine nut crusted sea scallops with shaved fennel & sun dried tomatoes on a bed of arugula & Italian parsley.  The scallops were a little on the undercooked side; but it was excellent! 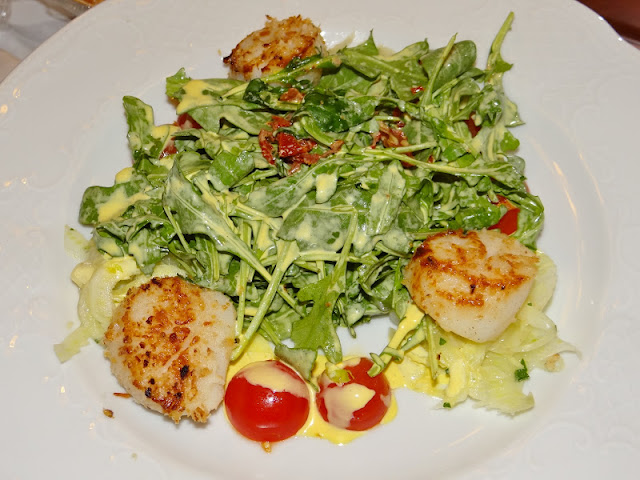 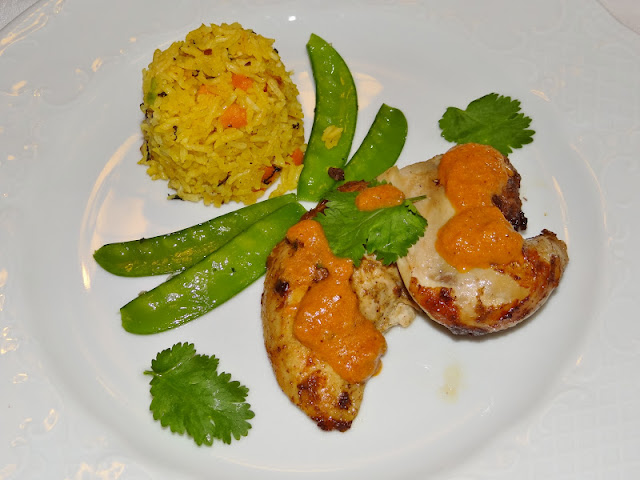 I decided to take the rest of the night off from the computer; & go to bed with the shore excursion book instead.  I know I’ve overextended myself with tour bookings for this segment.  It’s going to be unmercifully hot; & the tours are lonnggggg.  I need to make some decisions very soon. 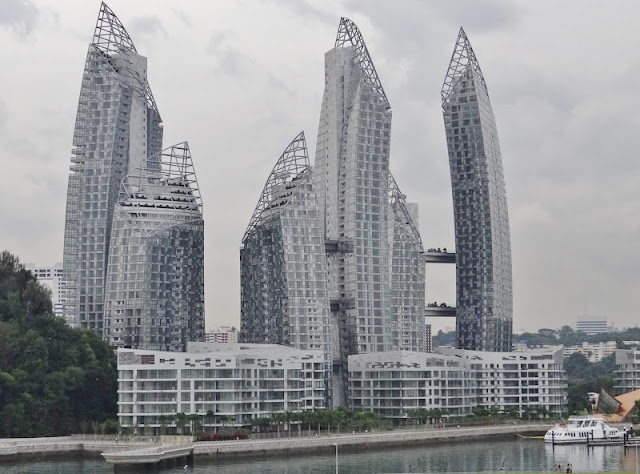 A very interesting place to live in Singapore Harbor. 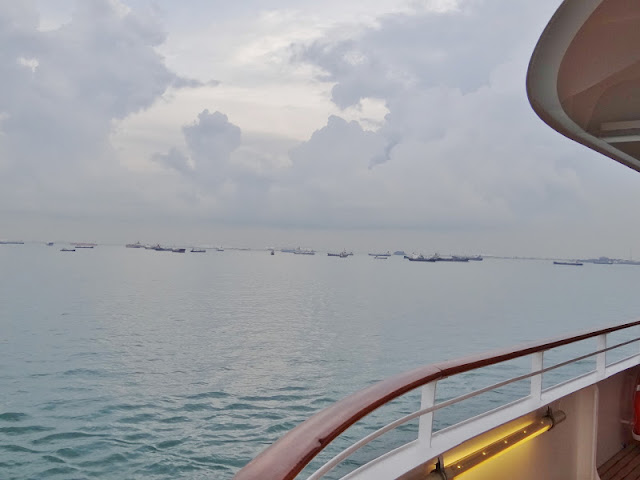 As we leave the harbor, lots of boats waiting their turn to get in.

It is so interesting to read your blog and having been on Serenity even more so. Keep going Becky and please, believe me, we are glued to this story!!!

I am hooked! When your current posts slowed down I went back and read from the beginning, day by day and year by year. I love the photos ( yes, especially the foof plates!) and I love your voice. You have a gift -- this entire blog could become a novel and, perhaps, avery successful movie. I don't know if that has occured to you, but it is something to think about. I would pay to read this and I think many others would, too.

Thank you very much for sharing your life with us.

Mike aka Rally on CC.

You can't go around the world and miss China! (actually, I have a brother who did just that -- he slept thru it as a student :(