Woke up again just before the alarm went off.  Another great night of sleep.  Watched the morning show; must be brain dead this morning….I couldn’t answer any of the quiz questions.  Not a good sign.  I need to be on top of my game for the Sudoku competition this morning. 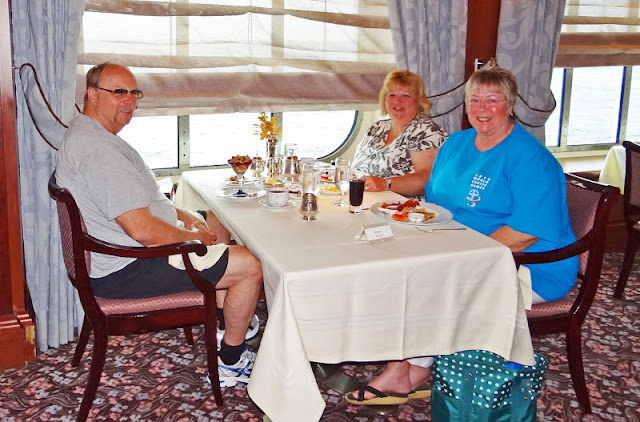 I was headed to the Bistro when I ran into Celeste & Bill at the elevator.  Didn’t see them yesterday; & we decided to get caught up over breakfast.  So, I joined them in the dining room.  She filled me on the world cruise event held onboard the other night.  She confirmed that it was loads of fun & a complete success. 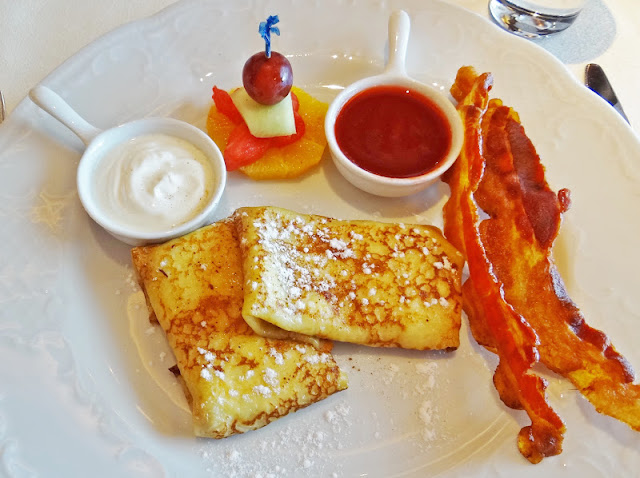 She had read about the cheese blintzes on my blog; & we both had some this morning.  Gave me another opportunity to take a photo of the fruit garnish.  Well, that & to enjoy the blintzes again. 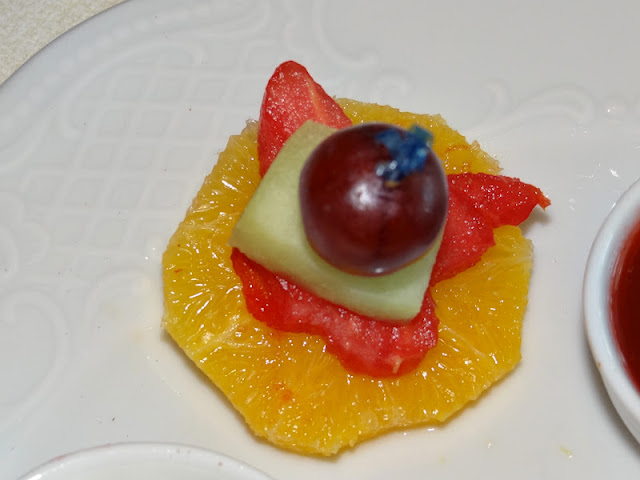 Bill brought the backgammon board because he had challenged Leo to a game.  After we ate, Bill went up to the middle section of the dining room; & they played a quick game.  Bill came back & told us he won.  Later in the afternoon, Leo said he wiped out Mr. Gilbert.  Not sure who’s telling the truth; but I’d put my money on Bill.  (PS: Later found out that Leo won; but Bill says he wanted to go easy on him at first.)


We were chatting through Capt. Glenn’s morning report so I missed all the nautical stuff; but I did manage to catch his thought for the day……”A statue has never been set up in honor of a critic.”  Hmmmmmmm, not one of his most profound.


I stopped by the shore excursion desk & picked up my flash drive from Debbie.  Went up to the Bistro to get my capp. to go.  Then off to bridge class.  Forget what I said about being on top of things yesterday.  When she went over it again today, it was as if she were speaking a foreign language.  Even after we played a few hands, I was still not quite getting it.  As I left there to go next door to Sudoku, it dawned on me that I was supposed to skip bridge class this morning & go back to photoshop class instead.  I probably would have done better there.  But, that means I’ll have to try to get in a makeup class on cloning in Photoshop during the next segment. 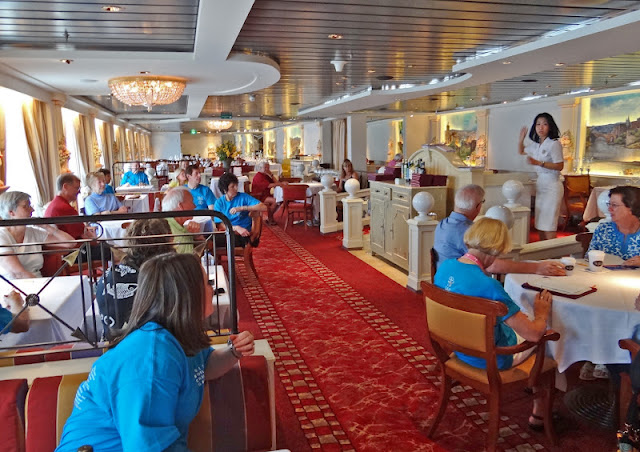 There were about 28 of us participating in the Sudoku Olympic competition.  We were to be timed through a series of 3 puzzles.  Starting with an easy one, working on up to the hard one.  You were to come up to the judge, let her check your puzzle; then she’d give us the next puzzle.  I did pretty well on the first two.  That last one was coming along well; & then she happened to mention that we had 3 mins. left.  I began to work a little more feverishly.  Then she said ‘one min.’; & I suppose I buckled under the pressure.  Disappointing, but lots of fun anyway. 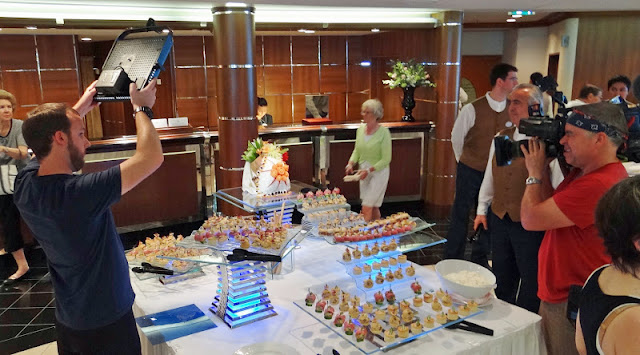 Following that, I went down to the Crystal Cove because they were having a ‘jazz brunch’ buffet.  This is one dining event I’ve not seen before.  The Crystal Orchestra & the stringed quartet rotated, playing jazz music (of course).  And the food was simply gorgeous.  And a lot of things I tried were delicious.  I went around taking photographs before everyone dove in & destroyed the beautiful displays.  The Discovery Channel crew was also shooting the event. 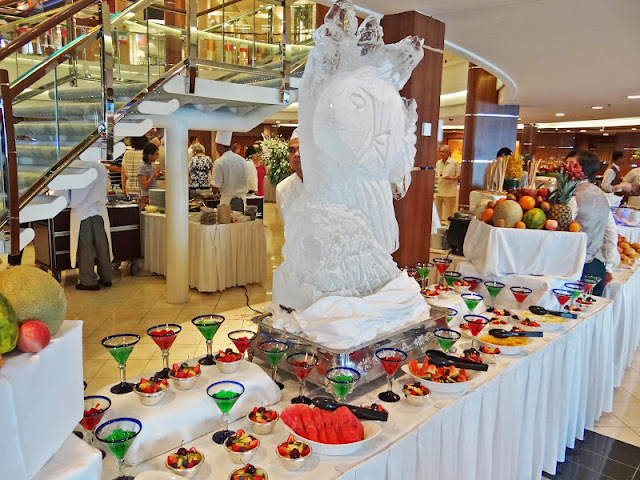 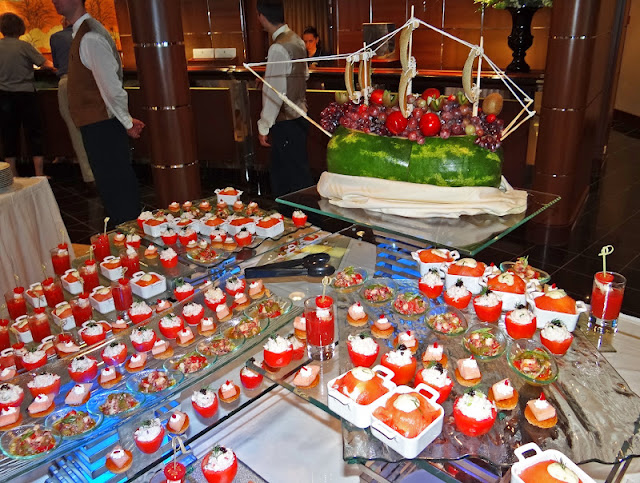 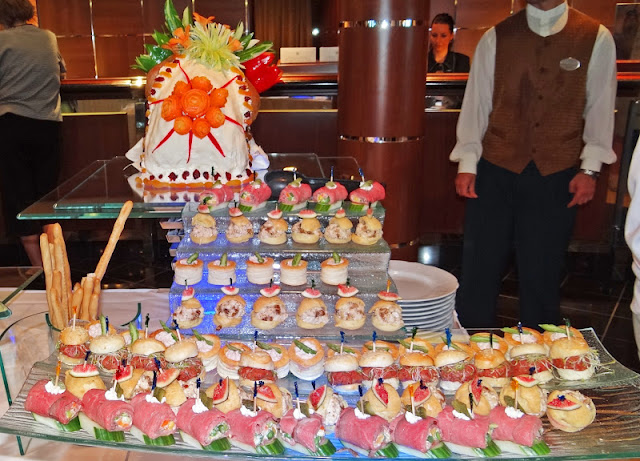 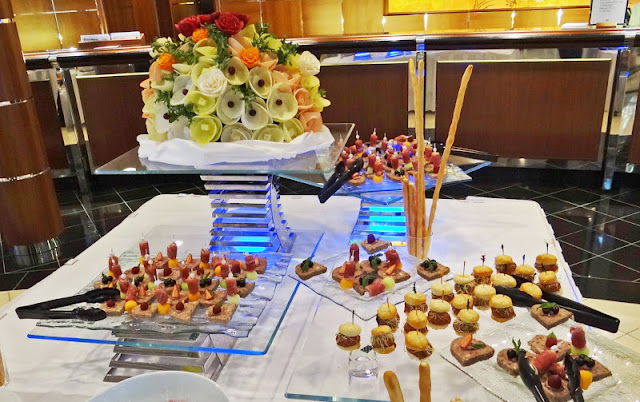 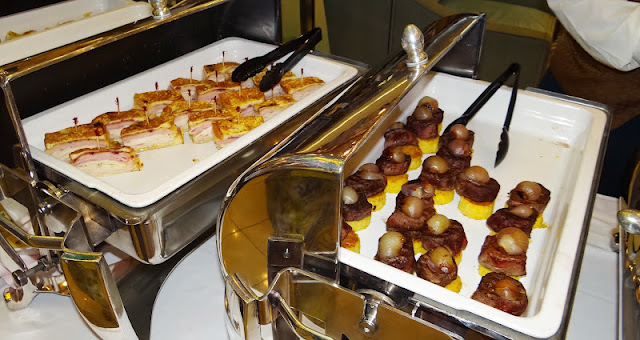 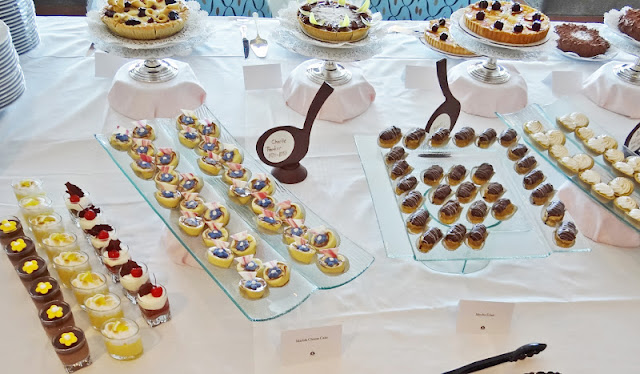 I found a spot on a couch by the window; & filled up a plate full of goodies.  I had a really delicious mini-Monte Cristo sandwich, a tomato stuffed with seafood salad, jumbo prawns, a darling prosciutto & melon ball appetizer, some creamed spinach, a few asparagus, the most wonderful seafood crepe & a little piece of beef tenderloin on a bed of polenta.  They were offering champagne & mimosas (which I had).  I sat & chatted with a lovely lady from CA.  She was recently widowed & getting back to cruising for the first time as a single.  Very sweet lady. 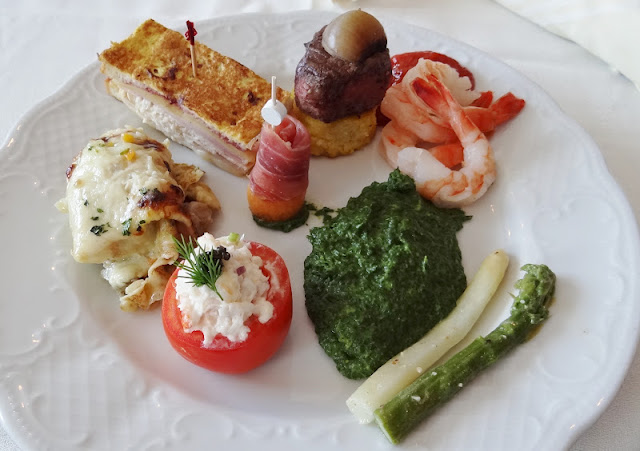 I went back to the cabin & did some more work on & tried to make a final decision on what photos I wanted to enter in the photo contest tomorrow.  We must turn them in by noon.  I narrowed it down to about 15; but I really wanted somebody else’s opinion.  I had previously stopped by the photo gallery; & asked if it would be breaking the rules to ask their opinion.  They said it was not.  So, I took the baby laptop down to Christine & Lianne; & they helped me decide.


My feet were swollen again today; so I propped them up in the bed & watched a slide show/lecture on colored gemstones on TV.  Somewhere in between emeralds & morganite, I fell asleep.  I think I slept 2 hrs.


I ordered dinner in; & Liz brought it about 8:15.  She told me she’s still in the semi-finals of paddle tennis in the crew games.  And she starts the pool competition tonight.  Somehow, I can’t imagine this petite thing wielding a pool stick.  The passengers are allowed to watch a few of the competitions between the crew teams later next week.  But the majority of their games are held late at night down in the crew area.  They have a hard time fitting in competitions because everybody works such erratic schedules.


Dinner tonight was very good.  I had an appetizer of seared prawns drizzled with basil aioli & a little scoop of butternut squash caponata on the side.  It was divine! 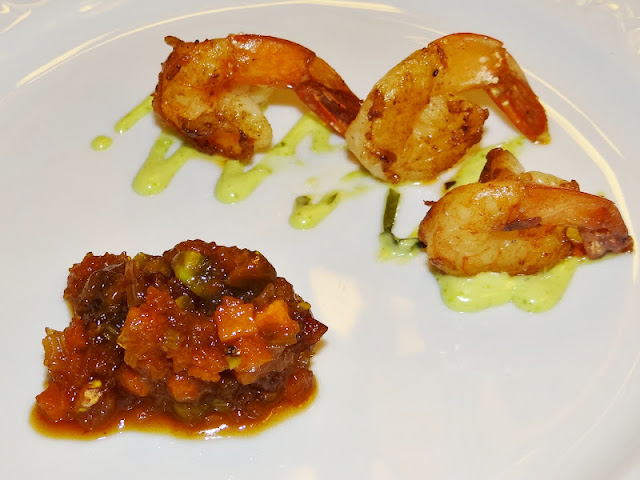 I tried an appetizer portion of tonight’s salad entrée.  It was pulled pork salad.  I was hoping it might be somewhat similar to the BBQ salad I love from back home; but it was not.  It was a good salad of romaine lettuce, kernel corn, sweet peppers, spring onions that was tossed in a roasted garlic dressing.  It had tiny blobs of slightly BBQ flavored shredded pork & a cute little cheddar crostini on the side.  Don’t get me wrong, it was good; but the BBQ meat reminded me of what comes out of a can.  Surprising, yes; but it is what it is. 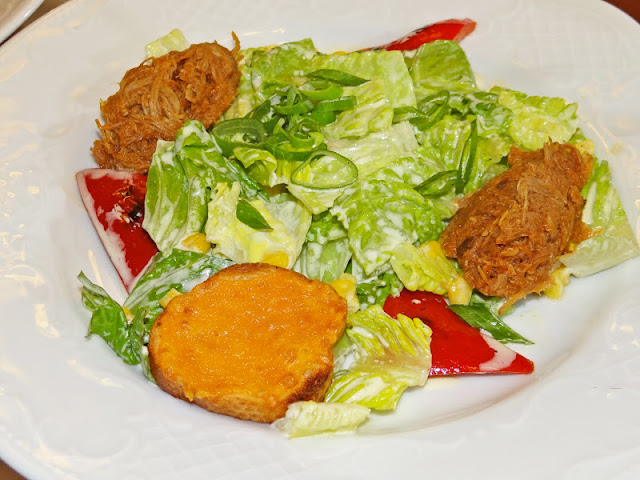 My main course was grilled swordfish steak which came with anchovy butter & mushroom & eggplant ragout.  I substituted the rosemary roasted potatoes with something called bacon-potato hash.  I didn’t give a lot of thought to what the plate would look like; but it was all ‘brown’.  The fish was perfectly cooked.  The larger piece was very mild; but the smaller piece tasted a little more ‘fishy’ for some reason.  The bacon-potato hash was orgasmic.  I could eat that for breakfast every morning. 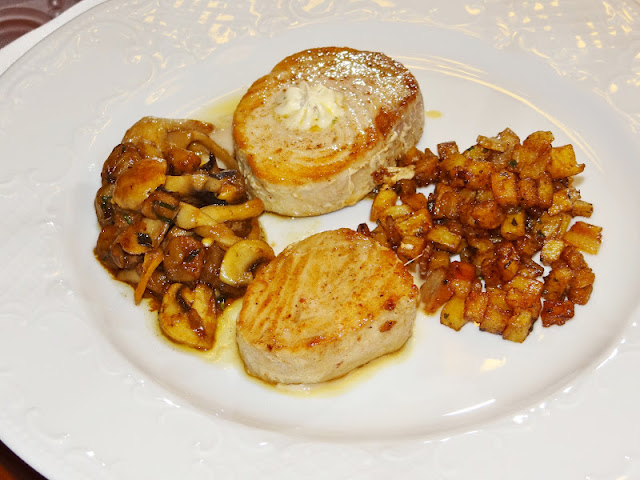 After I finished eating, I went back to work on the computer.  I was 2 days behind on the blog; & fortunately the internet wasn’t too slowwwww.  I finished that about 1:30 am.  I’m not really that sleepy; so I decided to go ahead & type up today’s blog & edit the photos.  It is now quarter of 3; & 8 am is going to come sooner rather than later.  I may not be a very nice person in the morning.
Posted by Unknown at 4:08 AM

"baby laptop"? Did you bring more than one with you?

Yes, Lou, I did. I brought the 11" Acer that you saw in Antarctica. And since I would be doing so much typing, I brought my primary home laptop (19" HP Pavilion g7). Much more user friendly.