After having been abed for about 10 hrs, I was up & around about 7 am.  I do feel better; but the ribs are sore from all the coughing.  And I did write notes to each neighbor apologizing for all the ruckus.  I know I would have been unhappy having ‘me’ as a neighbor the last several days.

I watched the morning show; & then rushed through breakfast at the Bistro.  You’ve noticed that I’m no longer posting photos of breakfast.  Trust me it looks exactly the same as it did days 2, 3, 4………  I may have to break tradition & go up to Tastes one morning soon for some of their ‘to die for’ versions of French toast.  But for now, I’m being as good as humanly possible under the circumstances.


Capt. Glenn reported this morning that we are now sailing in the Coral Sea at full speed (22 knots) on all 6 engines.  His decision to preserve the comfort of the passengers by skirting around this humongous low pressure system, has put us about 2 hours behind.  He is plotting another course change with the hopes that we can make up the time during the day.


It was much later today (during Harm de Blij’s lecture) that we learned the impact of the brilliant choices Capt. Glenn made yesterday.  Harm sketched a weather map for us so that we could make sense of it all.  For a weather watcher like myself, I found this information fascinating.  (Some of you may find it boring…if so, skip down 2 paragraphs.)  There were two large low pressure systems just below the equatorial line.  There was a chance that he could sail right in-between the two; but there was no way to know just how rough it could get.  Everything depended on if & when the 2 systems might merge.  Capt. Glenn felt that they would, so he opted to veer quite a bit off course to skirt the northwestern edge of the low pressure system; cut the engines; & ride it out.
This option would cost time & fuel; but it was a lot safer to do so than take a chance that the systems would merge while we were in the middle of the two.  So, you already know how the seas were kicked up yesterday; but there was a method to his madness.  By coming out on the southwest side of the storm, he would utilize the clockwise flow of energy from a neighboring high pressure system as a tailwind.  Capt. Glenn did report again later this afternoon, that we will be able to make up the time & arrive in Noumea on time tomorrow morning.  I always feel more comfortable with a seasoned Norwegian at the helm.  Good job, Capt. Glenn!


BTW, his quote for the day…..”No one makes a greater mistake than the person who did nothing, because he could only do a little bit.”


Bridge class was the same as yesterday, with Eddie allowing us to play mini-bridge on our own; & learn from our mistakes.  I made a few; & I learned something from them.  After bridge, I again stopped into the library & settled into one of the comfy lounging chairs.  I finished one book; & started another by Jayne Ann Krentz.  When they closed the library down for lunch, I went down to check out the dining room menu & to drop off the mini-comment card at the front desk.  (FYI, you no longer have to waste time onboard filling out the multi-paged questionnaire.  You may do this paperwork online after you return home.  This system will work well for me as long as I can keep notes during the voyage.  No way, could I remember who did what & how well after 2 months without impeccable note taking.)


I chose to eat up in the Lido again.  Libert found my favorite Dr. P.; & I sat at my (& Chuck’s) table.  I started with a salad, lots of hearts of palm & jumbo shrimp cocktail & 2 tiny little pimentos stuffed with a spicy cheese mixture.  Had a nice kick to it; very good. 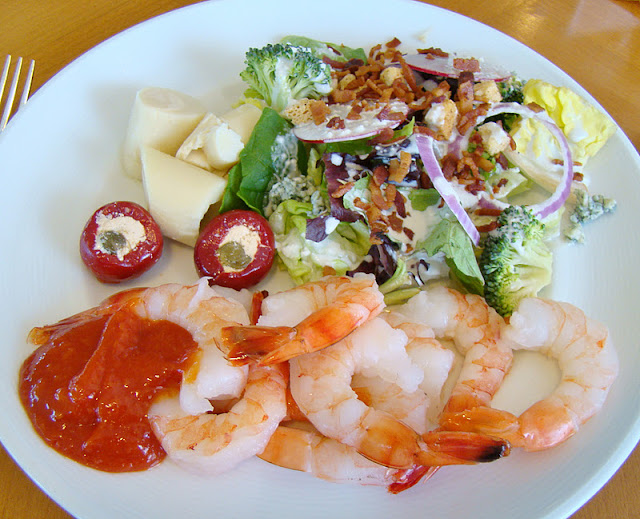 I took a small taste of several of the hot entrees.  The grilled ocean perch with lime butter sauce was excellent.  I had grilled veggies & sautéed rapini (broccoli rabe) along with that.  They also had little ‘logs’ of swiss cheese that was breaded, fried & served with loganberries. Everything was absolutely delicious. 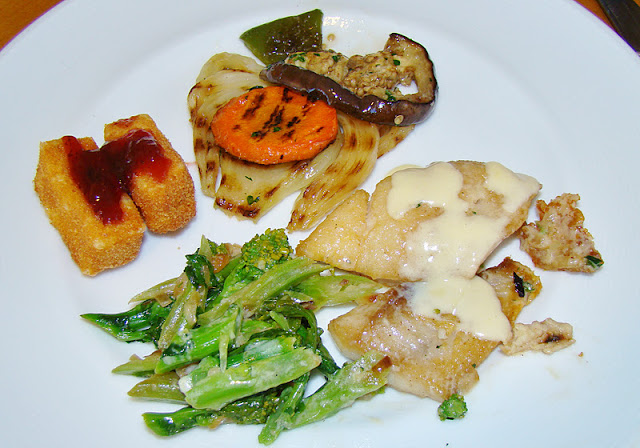 I stopped for short chat with Elaine on my way out of the Lido.  Next I went down to the shore excursion office to talk over my tour selections.  I wanted to get a better idea of the amount & type of walking required for some of the longer tours I had prebooked.  Darko sat down with me; & although he didn’t have the exact details I was looking for, he promised to do further research & get back to me.  Some tours are marked ‘strenuous’, not because of the type of walking; but because of the extended duration of the tour.  That’s what I wanted more clarification on before I commit to something my hip can’t handle.


About 3:30 I settled in to watch Harm de Blij’s lecture on ‘The Geography of Democracy-Health, Wealth & Women’. He spoke about how one's health & wealth are greatly dependent on what area of the world you are born in.  He also pointed out that in some societies, it would be wise to turn over business & governing decisions to women since the men haven't always been reliable in handling these affairs.  He's obviously a very big fan of Hillary Clinton, saying she's been the most effective & influential Secretary of State since Kissinger. 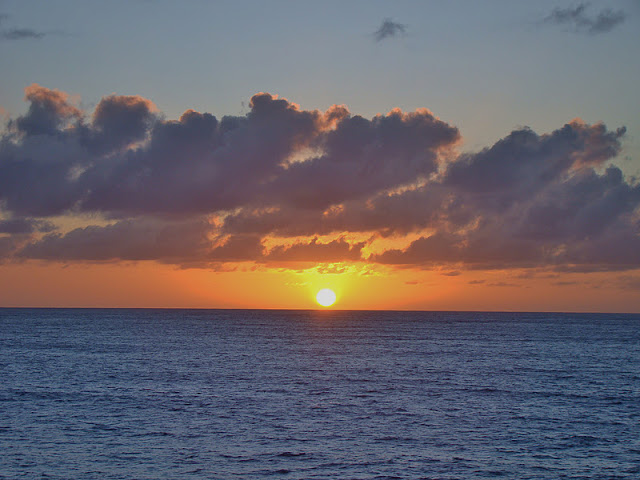 Following that, I watched the movie “Secretariat”.  Very enjoyable.  I dozed for a short while; & woke up when it began to feel very warm in the cabin.  Our course was now more southerly; & the late afternoon sun was blazing right into my windows.  This would be the first real sunset I’ve seen since we left L.A.  And it was spectacular. 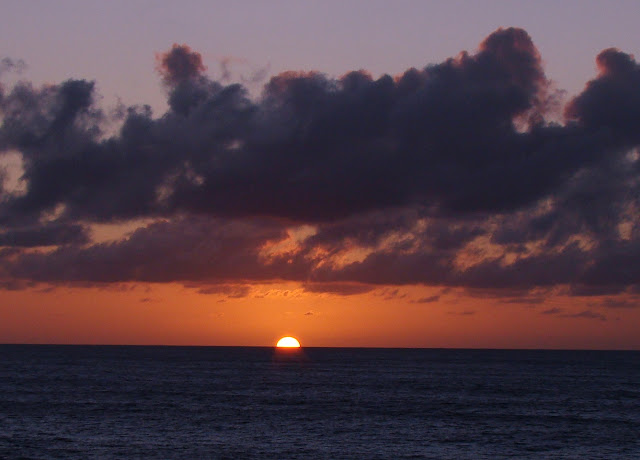 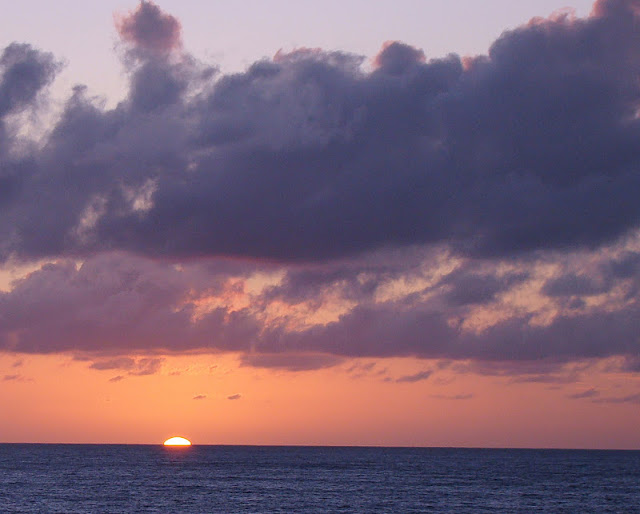 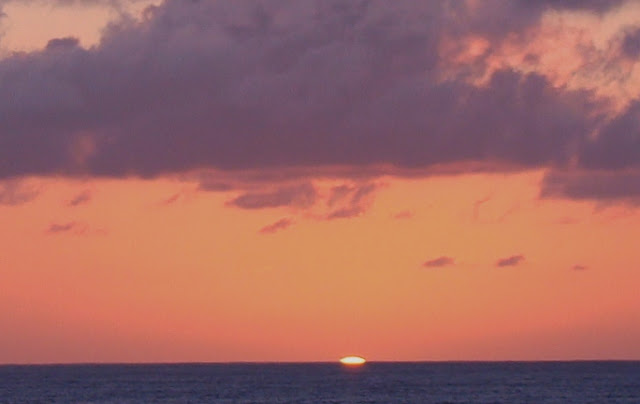 I put my dinner order outside for Liz; & she returned with it about 8 pm.  Bless her heart, she was still suffering the effects of sea sickness.  Her assistant had to take over her duties this morning.  She said she was feeling better; but she didn’t look her usual perky self. 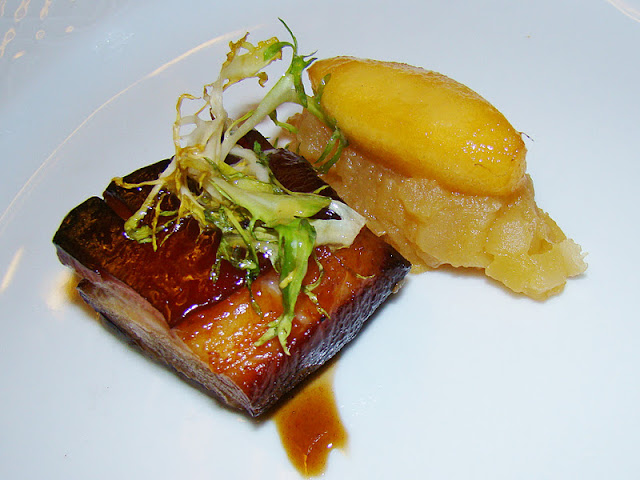 Tonight’s dinner started with an appetizer of bourbon & maple glazed pork belly (man I love that stuff) on a bed of apple puree.  Fabu-licious! 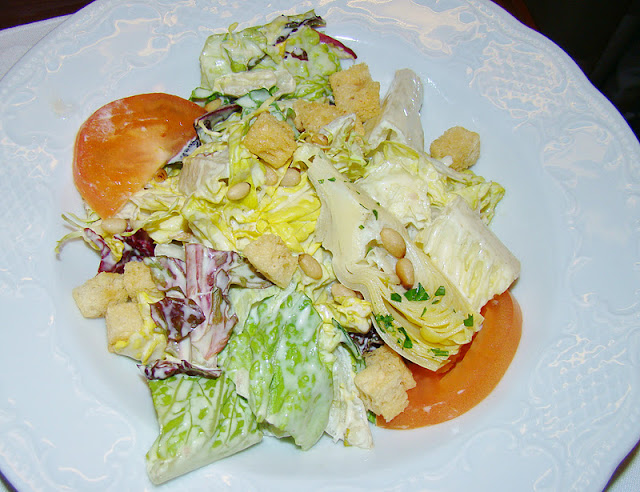 Next was a mixed salad with this awesome honey shallot vinaigrette. 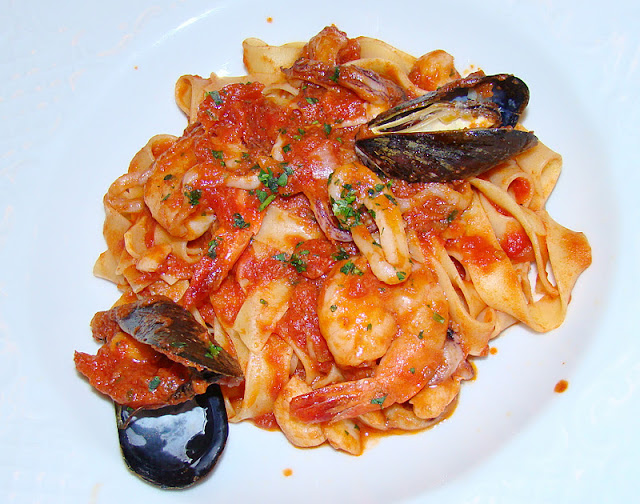 My main course was tonight’s pasta special…..tagliatelle with calamari, shrimp, scallops & muscles in a tomato sauce.  It was also very good.


I was basically stuffed; but did pull out last night’s leftover dessert from the fridge; & had some of that before bedtime.  We get to turn our clocks back another hour tonight.  That will feel especially good since I will have to set the alarm for my morning tour in Noumea.  Those long strings of sea days are over for a while.  The port visits will become more frequent from here on out.  Many new adventures on the horizon…
As a gentle reminder......since we crossed the international dateline yesterday, the ships is now a full day ahead of those of you reading this back in the U.S.  Just so you won't think you're crazy.  No comment on my mental capabilities, please!