February 22nd
Sailing the Java Sea in route to Semarang


I slept like a rock; & was awake at 6:45.  The seas are as smooth as glass.  There is just the slightest wave coming off the side of the hull as the ship moves slowly through the water.  We have a short distance to travel; & we’re basically coasting. 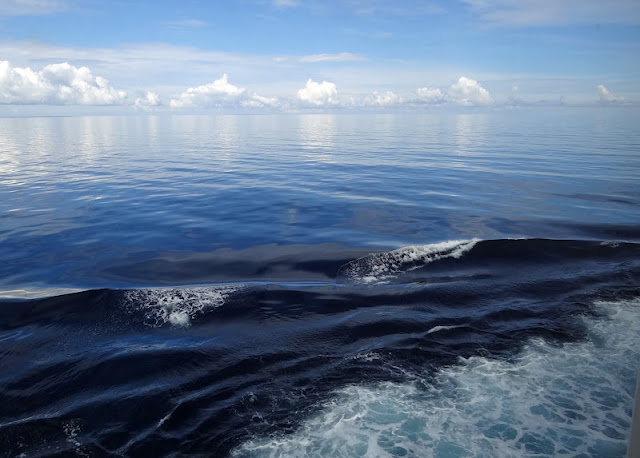 I enjoyed Rick & Elise on the morning show.  Must be a pretty good day in my brain.  I got the trivia answers correctly, I was just too slow calling in.  Guess others are sleeping in this morning cause it was deserted (& very dark) when I went in the Bistro at 8:45.


Capt. Glenn reported that we are coasting along at 13 knots, on 2 of the 6 engines.  It’s already 86*; & there is no wind other than what’s caused by the ship’s forward motion.  In other words…..it’s stagnant out there.  We are traveling northwesterly at the moment; will turn more due west around noon as we slide between other Indonesian Islands.  And then tonight our course will turn southerly for our approach to Java.  His thought for the day….”Who we are never changes.  Who we think we are does.”


I had the usual breakfast, followed by bridge class.  I’m getting lost again on bidding.  One day you think you’ve got it; & then you take your ‘stupid pill’ the next sea day.  I went down to the Reception Desk; & ran into Celeste & Bill.  I sat with them a while in the Crystal Cove to hear about their elephant ride through the jungle yesterday; & to look at their photos.  They asked me to join them for lunch in the dining room; so we continued the party in there.  I wish all of you could meet Celeste & Bill.  She’s a lot like me in a way, with her bawdy sense of humor & then there’s her NY accept.  Bill’s just the most laid back person on the planet.  They are a classic example of opposites attract.  And I’ve had a blast connecting with them (almost) daily.


I had a marinated brussel sprout salad with red lettuce & bacon bits.  It was quite good. 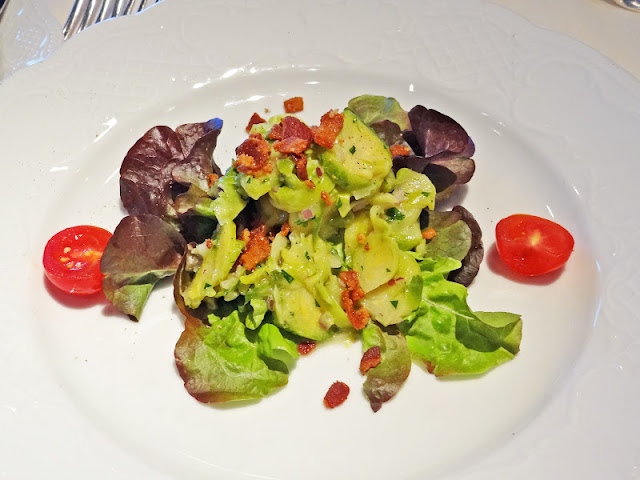 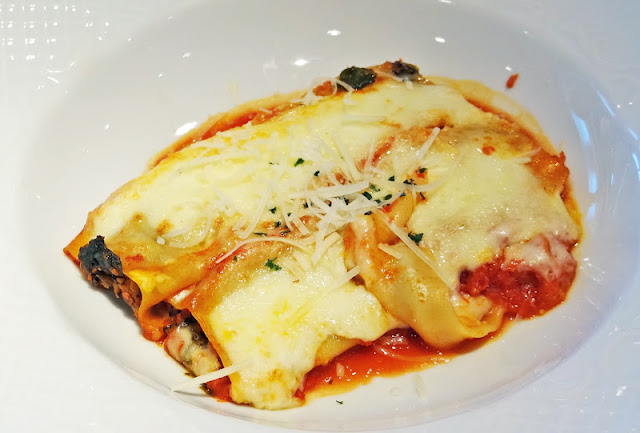 I had dulce de leche ice cream for dessert (which looked like any ordinary ice cream).  But Bill’s dessert was a work of art.  Sorry, I didn’t write down the name of it; but it was photo worthy on a slow news day. 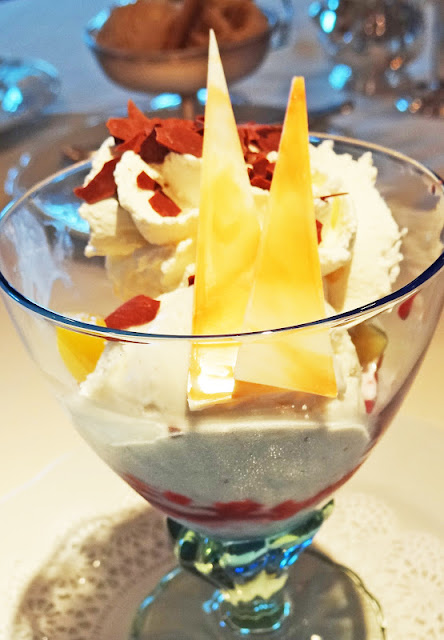 At 2pm, they held the crew tug of war & the slippery pole contests out at the Seahorse Pool (still a part of the World Cruise Games).  I felt sorry for them because it was so blazing hot.  But the crew loves this annual event; & so do the passengers.  Each department had chosen their team members & had dressed in (some were at least) outrageous costumes.  But when it came to the competition, everyone got very serious.  There were divisions for both men & women.  Rick kept making comments about this event being broadcast worldwide.  And it did kinda look that way with the regular Crystal film crew & the Discovery Channel people with all their cameras & mike booms.  At times it was impossible to ‘shoot’ over them all. 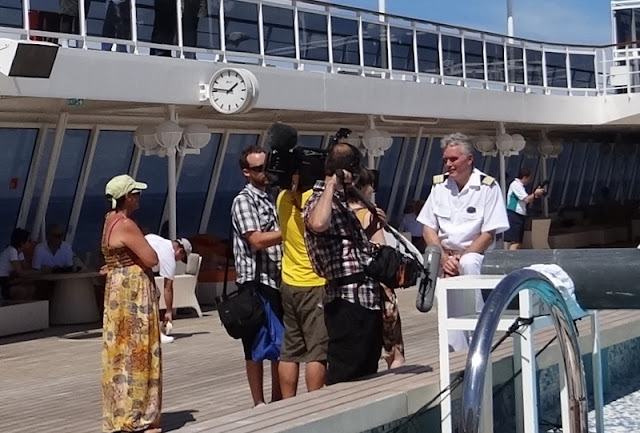 And who should be there with a megaphone, cheering them on??????   David! 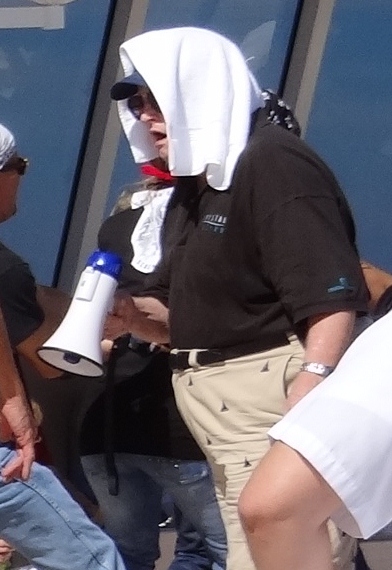 There were elimination heats; & the men’s final was between the Dining Room Dept. & the Engineering Dept. 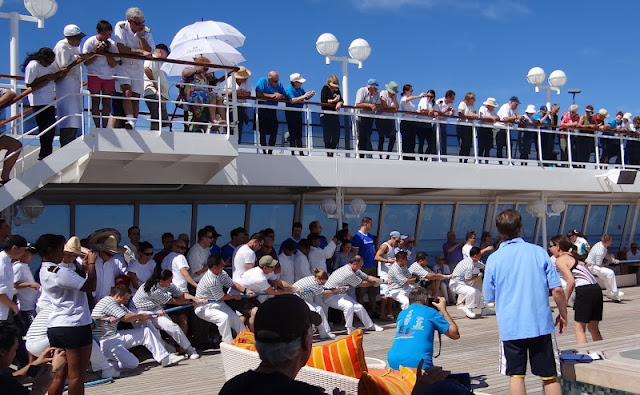 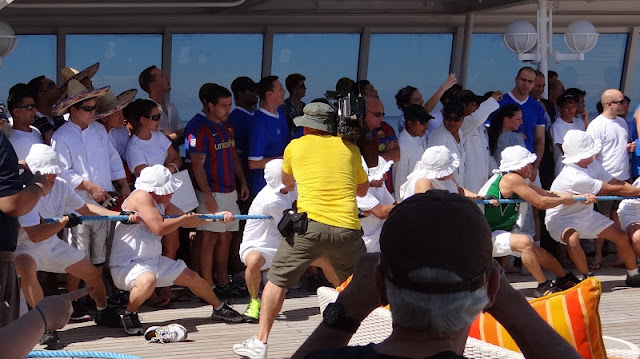 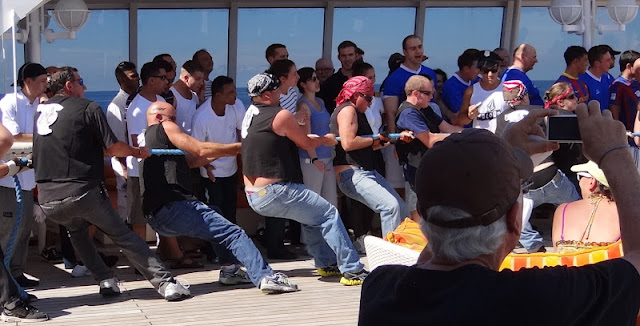 Some of the D.R. waiters took off their shirts (wow, what muscles) & got serious.  The Engineers put up a good fight; but didn’t stand a chance.  Exhausted & over heated, a good many of them jumped into the pool. 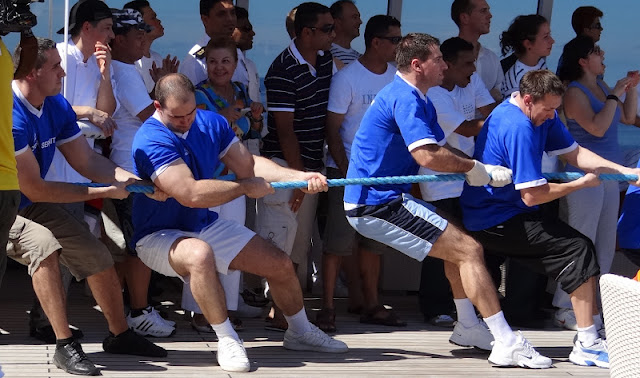 Then it was on to the slippery pole contest.  Using inflatable boxing gloves, two competitors slid their way across a large pipe laid over the swimming pool.  They met in the middle; & duked it out until one of them fell in.  There was a shortage of women participants; so there was only one heat.  A cabin stewardess named Annelle (sp?) took on Capt. Glenn’s Assistant, Arlene (reckon she was ‘ordered’ to participate so that there would at least be one pair of women)?  Annelle took her down in a split second. 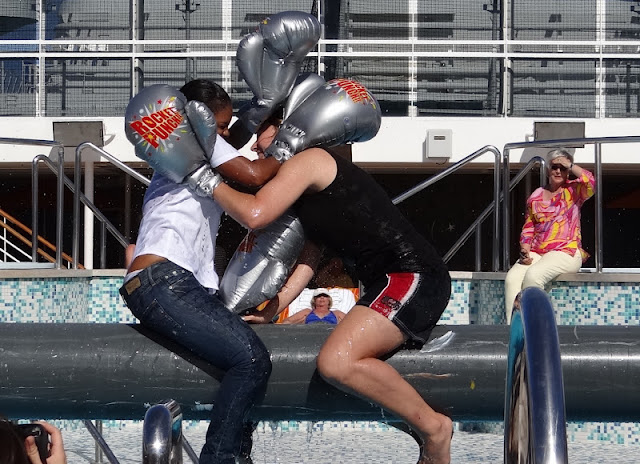 What turned out to be a joke on us……Josef (Hotel Director) took on one of the sous chefs.  This tiny person wearing baggy pants, white smock, sunglasses & a baseball cap climbed up on the pole.   At first nobody would make the first strike.  And then they playfully started hitting each other.  Joseph went in the water, closely followed by the other person.  When the ‘chef’ hit the water, the baseball cap & sunglasses fell off; & we realized it was really Elise Ivey (the World Cruise Hostess).  They’re both such great sports.

The men’s final was between Roderick (don’t know which dept.) & Jonathan from the Casino.  They were pretty evenly matched; but both fell into the water at the same time.  Rick decided to give them both a gold medal. 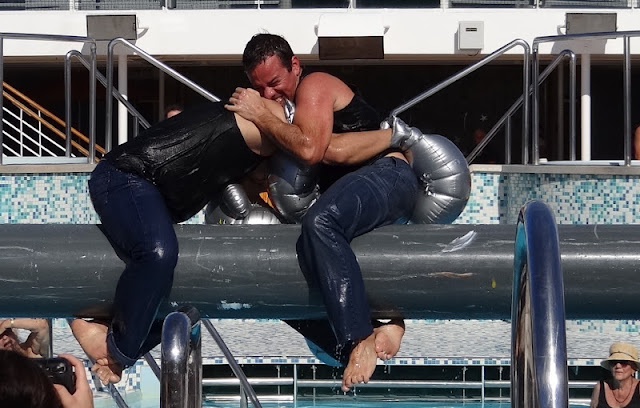 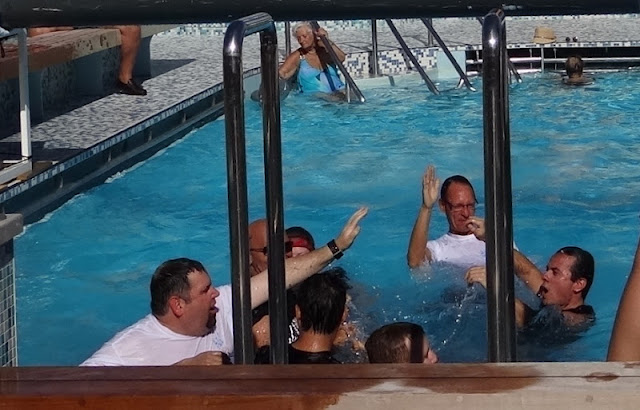 I went back to the cabin to work on photos.  But had to be in ‘uniform’ & down at the Crystal Cove at 5:15 for the closing ceremony of the World Cruise Games.  They put on a lovely show.  First the Crystal chorus (made of very talented passengers who had been practicing & performing ever since we left L.A.)  A group of the Crystal dancers put on a funky, high energy dance number.  One of the featured vocalists sang a very appropriate & beautiful song called “I Was There”.  And an adorable 5 yr. old passenger got to extinguish the Olympic flame. 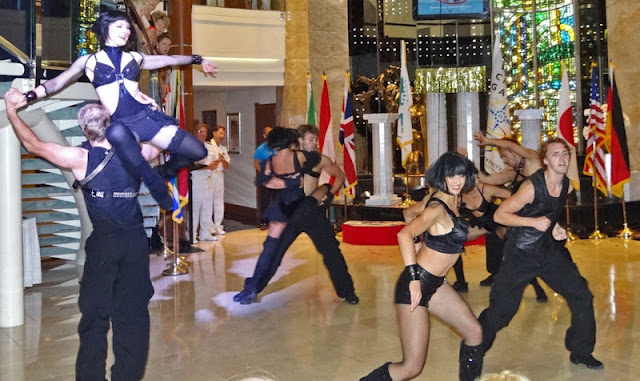 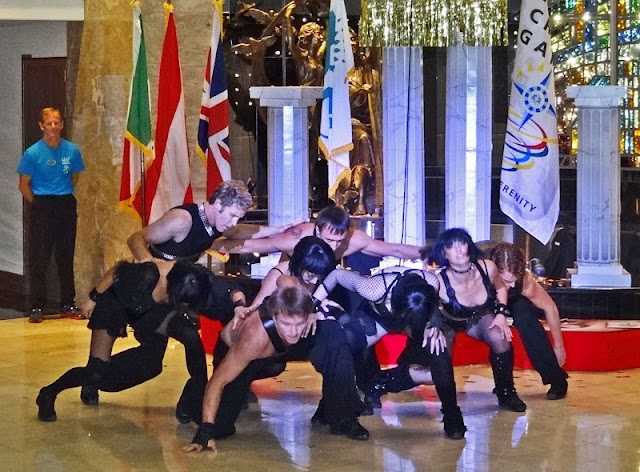 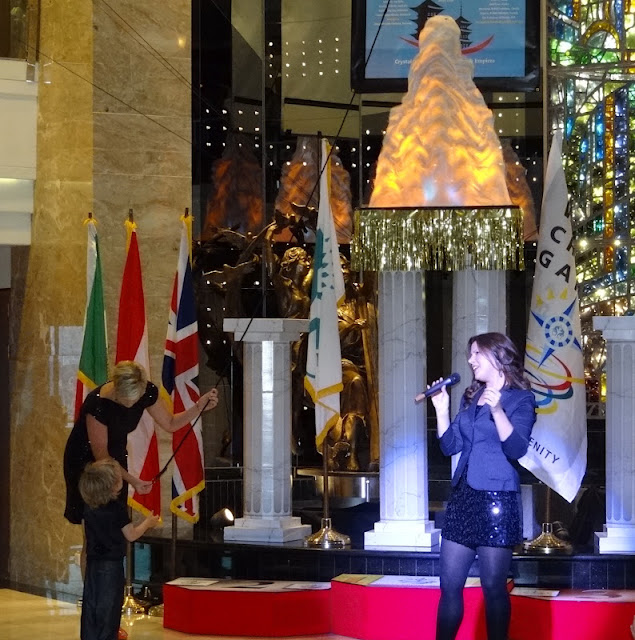 Olympian, Peter Vidmar made his way to the stage walking on his hands; & handed out more medals.  For instance one woman won a gold medal for lap swimming (over 890 laps, no joking about the size of the pool however).  Two of the passenger’s favorite Lido stewards won medals in the family paddle tennis competition (where a member of the crew is partnered with a passenger).  Ritchie won the silver; & Bryan (who is signing off in Hong Kong) won the gold.  I was disappointed that my photos didn’t make the grade; But when I saw the winning shots a few days later, I was greatly impressed with their composition skills.  Will post photos of them later. 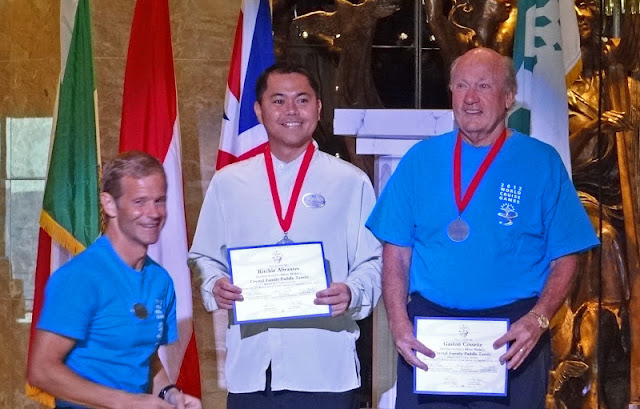 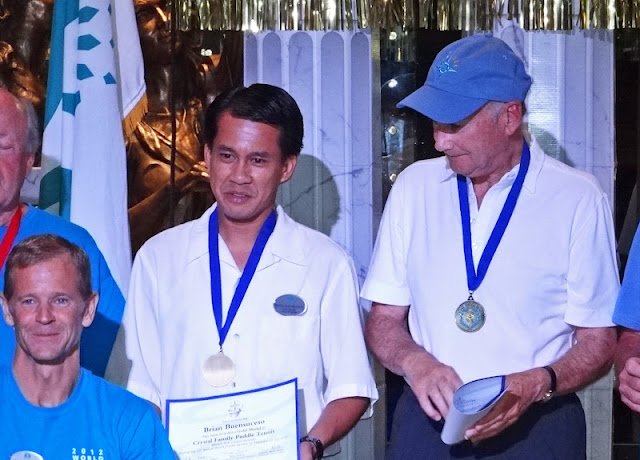 After that was over, I went back to do more work on the photos.  Tonight’s dinner menu was featuring Balinese food; & I ordered early.  My appetizer was a nice, spicy Indonesian shrimp salad with sambal & peanut-coconut dressing.  Outstanding! 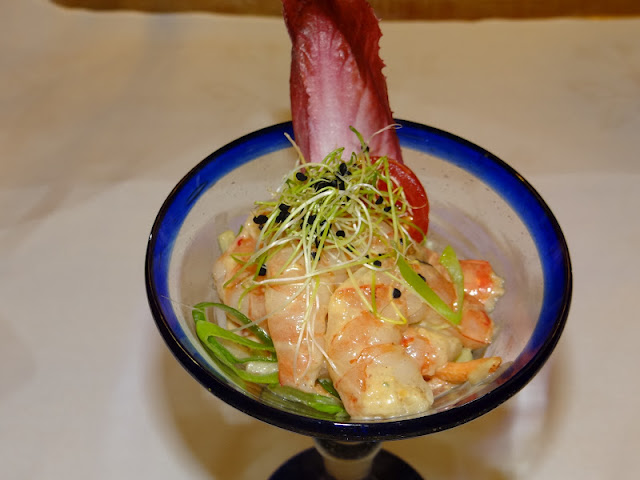 I had an appetizer portion of the pasta special….spaghetti with lobster Bolognese, lemon oil & parmesan.  Bolognese is normal; but I have to admit using pieces of lobster meat in place of ground beef made it more exotic & very tasty. 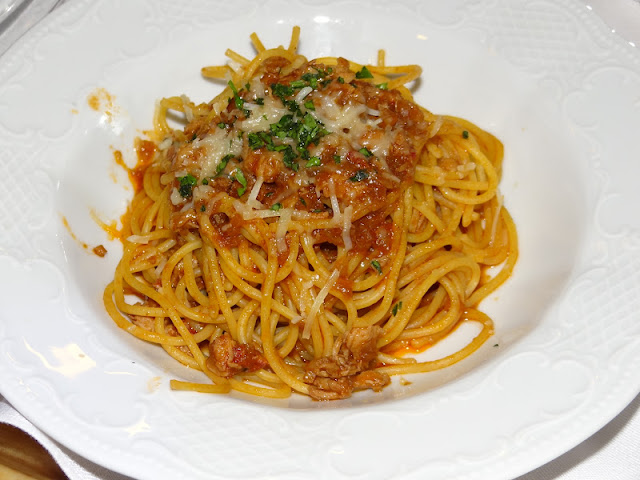 Thought I’d give the fish entrée a try since it was broiled local grouper (LOVE grouper) with a cantaloupe-lime salsa.  It sat on a bed of Balinese black rice (very earthy tasting) & came with sautéed choi sum (sort of like bok choy).  The fish was thick, meaty & perfectly cooked.  The whole meal was divine! 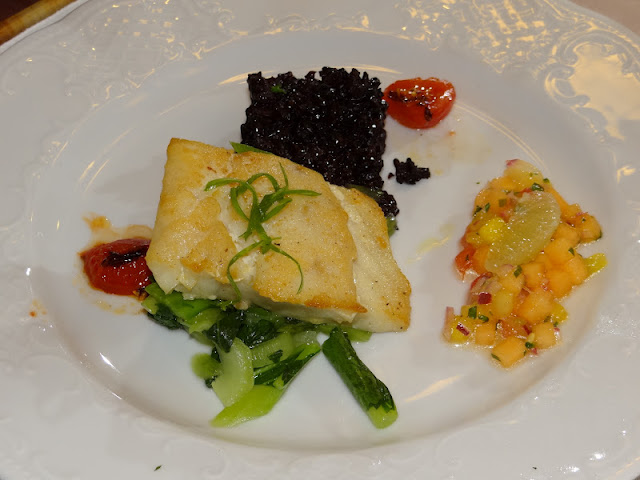 I wrote some emails; but still didn’t have the energy to do the blog for Bali (which was eventually completed days later).  In fact, I’m still trying to digest everything I saw & did yesterday.  It was so surreal; it’s hard to put it into words anyway.  I was even too tired to read.  Lights out at 10:45.

Becky you need to make the first picture your background for your blog. It is beautiful!!!

LOVE LOVE LOVE that first picture. I've made it my wallpaper and am dreaming that I'm along for the ride.

Really enjoying your blog. I live in Naples and am booked on an Asia cruise departing in less than 12 months. Can we get in touch with you when you return to Naples?

We are sailing on the Symphony in May. Look forward to all the food on Crystal. By the way, glad you survived the heat in Indonesia. It looked brutal!
Stephanie